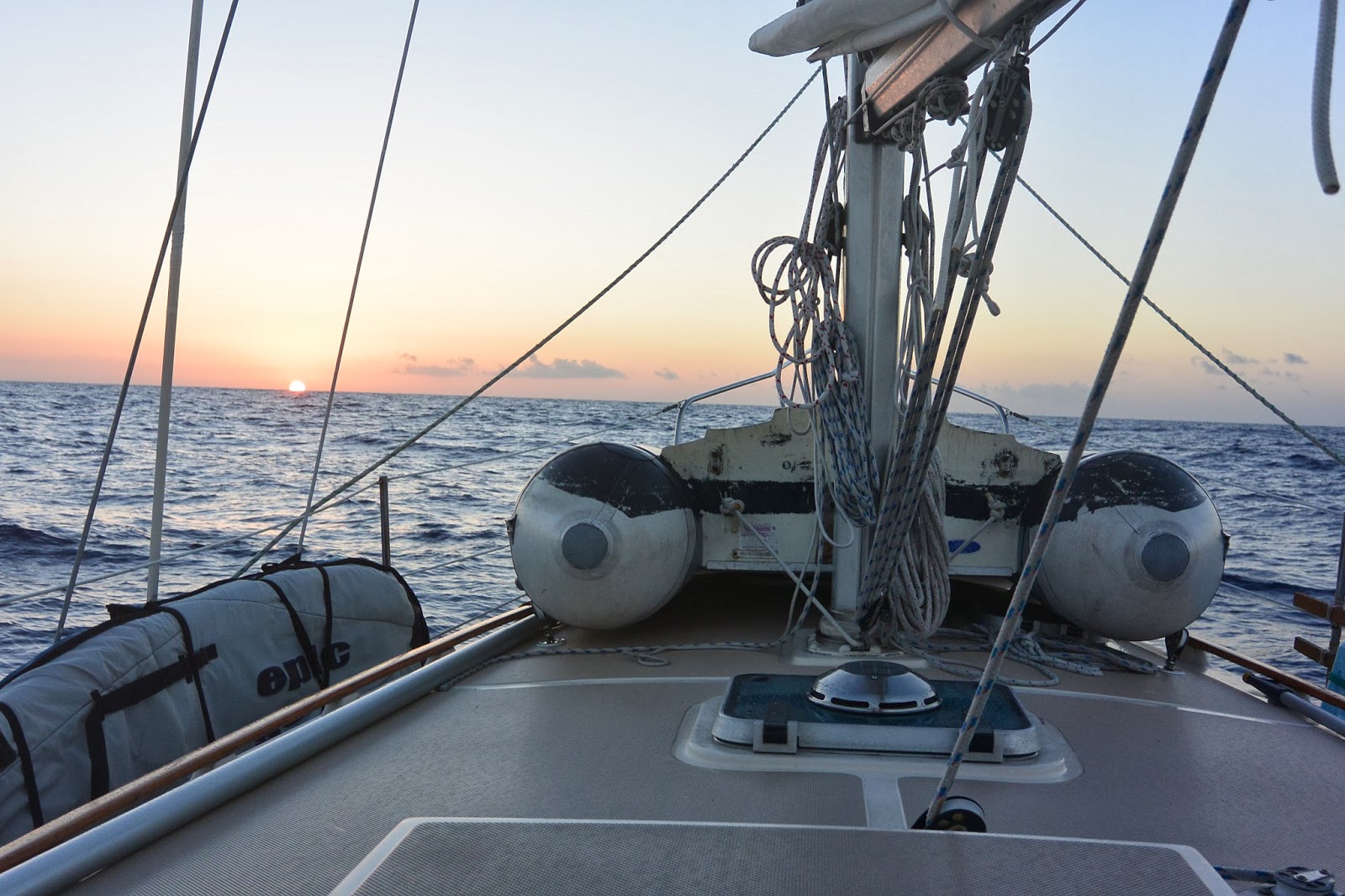 Dana and I spent three of the past five nights sailing overnight. We’re over fearing the dark, and instead have been using it to our advantage. On the north coast of the Dominican Republic, and other spots hammered by the incessant trade winds, the howling wind from the east only tends to diminish at night. Hence, sailing through the night and early morning provides a modicum of comfort when attempting to sail east. You still typically have to run your motor, due to poor wind direction (or no wind at all), but at least you’re not pounding into heavy wind and waves.

That said, we left Ocean World in Puerto Plata on Sunday morning. We were travelling with a buddy boat, West Wind. Chris and Leslie on West Wind are great, and we’ve been hanging out with them since we all met in Providenciales. As usual, by afternoon, the blasting by headwind and 8-foot seas began.  We turned into one of the few available anchorages and acknowledged that we had to sleep during the day and sail at night if we were to make it to Punta Cana (120 more miles) before our dreaded crossing of the Mona Passage to Puerto Rico. We couldn’t really sail during the day even with a supposed “weather window!”

After a few hours sleep we took off for an overnight motor sail to another anchorage to wait out the next day. At 2:00 AM in the calm and beautiful night, Dana and I got a worried call from Leslie on the VHF. West Wind’s engine died and they were “adrift.” They didn’t even have a sail up, because the night was so calm, so they were really stranded. We went back for them to see what we could do to help, but before we arrived Chris already had the diesel engine up and running with some tinkering and a filter change. It was a scary moment, because there were no anchorages, marinas, squat, for 30 miles in any direction.

We (Eventyr and West Wind) anchored the next morning in a beautiful bay surrounded by towering cliffs and rainforests on both sides. At the end of the bay was a picturesque beach with a few small fishing huts. Not a bad lay over. However, while there, Chris checked the weather via his satellite phone and realized we could not make it all the way to Punta Cana in the time allotted given the weather. It would be so bad the next couple days we couldn’t even use our night sailing strategy. 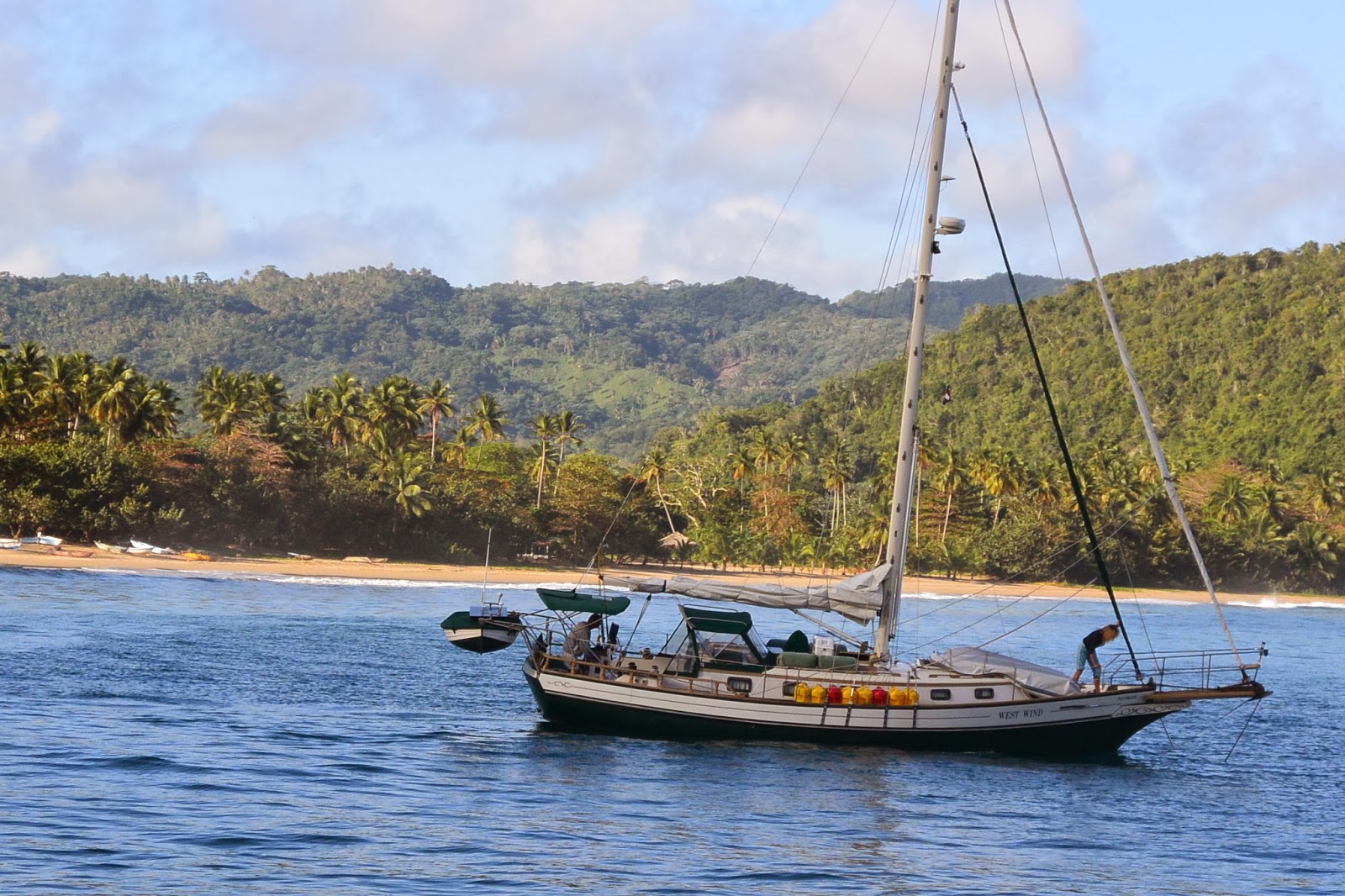 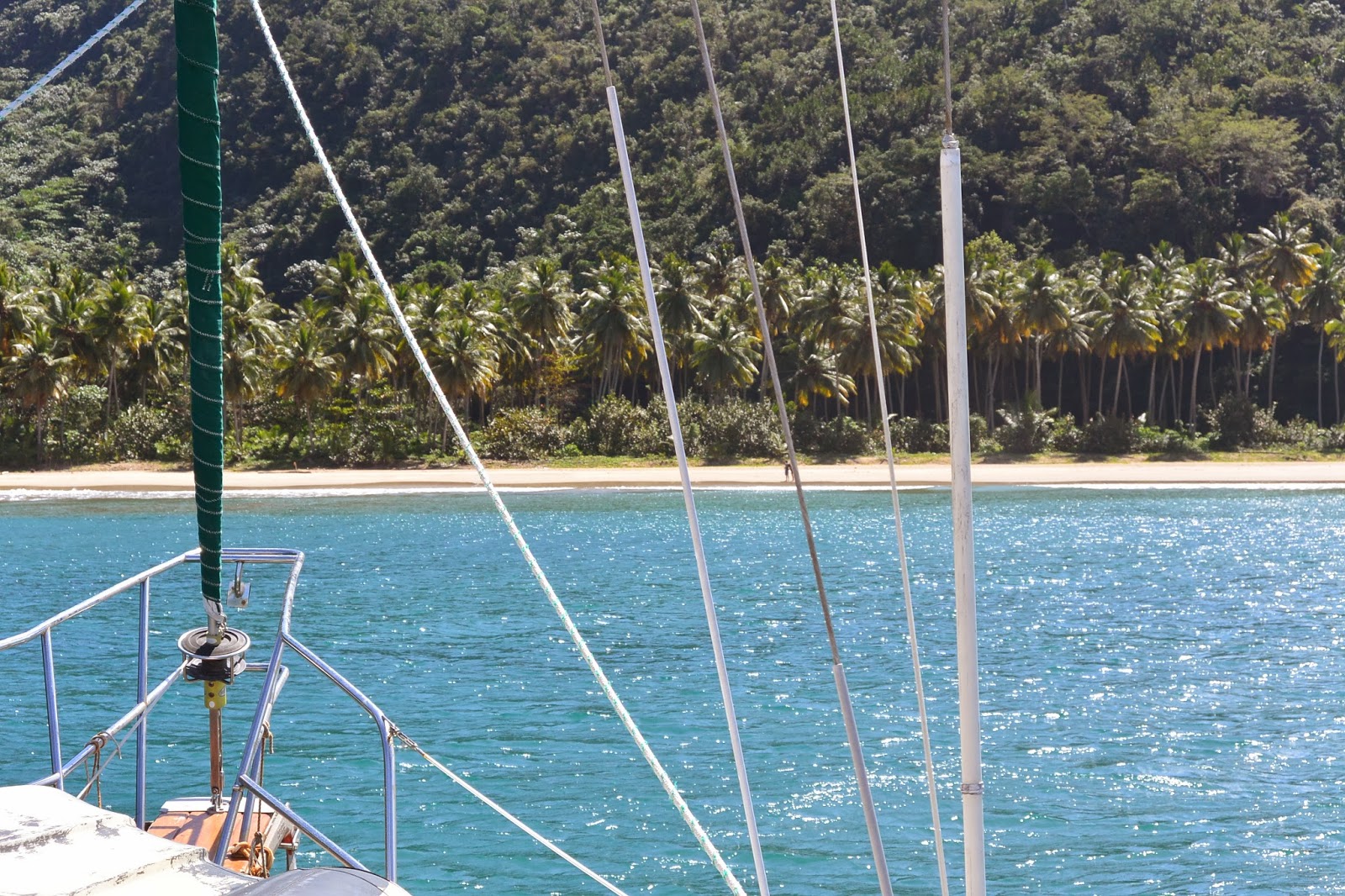 Resigned to the fact that we couldn’t make it to Punta Cana, we decided to shoot for a closer town, Samana. Described as the “Appalachia of Dominican Republic” in our cruising guide, Samana is remote, has breathtaking jungle scenery, and is very poor. Due to reported Dinghy and outboard theft, we decided to stay at the one marina in town instead of anchoring off the town and dinghying in. Lucky for us, the marina is super cheap, yet part of an ultra luxurious resort, to which marina guests have full access. While there, several other boats we met back in Providenciales, Luperon, and Ocean World all arrived using the same weather window. It was like a reunion of sorts, and we all took advantage of the pools, exercise facilities, and top notch dining.

While at the extravagant Punta Bahia Marina, in Samana, we got a ride into the town of Samana. Despite feeling under the weather, Dana came along with Chris, Leslie, and I. Being in Domincan Republic, it seems that all the cruisers are sick at some point or another. I guess our weak gringo stomachs aren’t up for the random bacteria in the food, water, etc, around here. The four of us wandered around Samana and eventually found a nice place for dinner. I had some excellent goat, and Dana was able to keep down some Mahi. I have to say, Dana’s Spanish speaking ability has been a godsend since arriving in DR. She communicates well with all the locals. My middle school Spanish is not cutting it. All the locals seem to really appreciate Dana’s language skills and we’ve been treated really well, and not nearly as ripped off as some other cruisers with whom we’ve spoken.

After only two nights, Will and Cheryl on Varua informed us they were leaving that day at noon to sail directly to Puerto Rico. Will sold us an outboard when we were desperately in need back in Providenciales, for which we are grateful on a daily basis. I confirmed the weather was going to be good with the meteorologist at Carribean Weather, and Dana agreed we should leave. We got our stuff together in minutes, checked out of customs, filled our diesel and water, said our goodbyes, and threw off our docklines.

The sail from Samana to Mayaguez, in Puerto Rico, is 150 miles and the longest Dana and I had done.  It would likely take us 30 hours and we were ready for a long haul. Will, on Varua, is a sailing truist, like my Dad, and quite opposed to using the engine when he can sail (even if many hours and miles out of the way). Dana and I, on the other hand, are quick to turn on the engine if the sails aren’t doing the job of getting us where we want to go. Hence, we passed Varua a couple hours after we left, not to see or hear from them again until PR. They got there about 8 hours later but probably burned through way less diesel.

Our sail (motor sail, I should say, since we always had the engine on and the sail provided only back-up support when it could) across the Mona Passage, was mostly peaceful and uneventful. It’s hard to believe! It seems that every crossing we’ve done to this point has involved huge seas, crashing waves, howling winds, fear, and tears. This one involved lounging in the cockpit in a swimsuit getting a tan, chatting, drinking hot cocoa at night, waiting for a fish to strike my lure, and watching for ocean wildlife. Although I didn’t catch any fish, we saw dolphins and whales. I wish I could have gotten a better picture of a whale, but Dana spotted the large tail of a humpback just as it was sliding into the water. Later another pod swam within a couple hundred yards of Eventyr before disappearing into the deep. 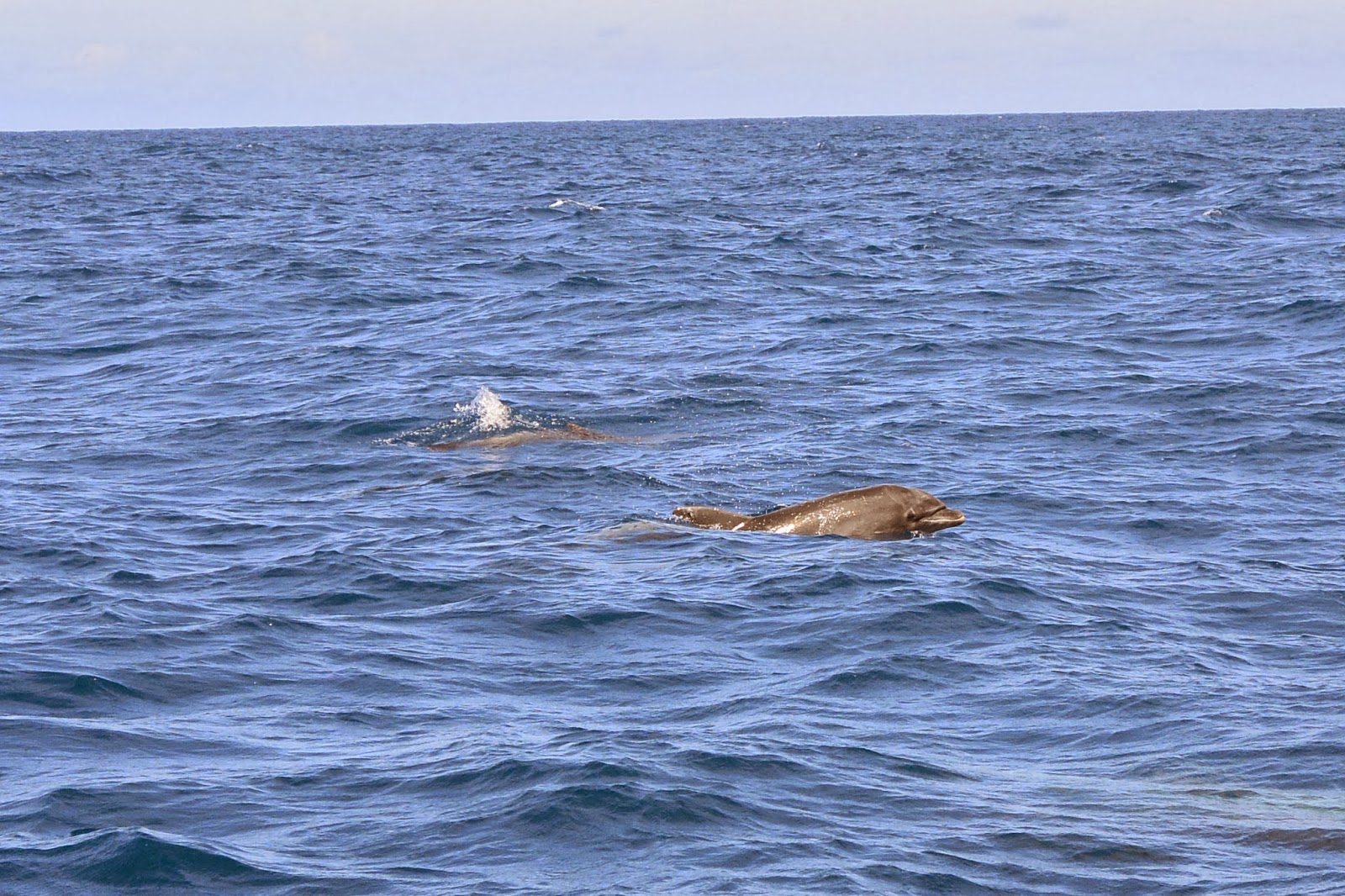 We arrived at Mayaguez, Puerto Rico just before sunset the next day, completing the trip in a record 28 hours. We celebrated Valentine’s Day on board, at anchor, off the customs dock with no real hoopla, aside from eating some stove top stuffing, which we’d been craving for quite a while now. Funny how little things can get you excited when you’ve been living on a boat outside the U.S. for months :-)

We’re currently anchored in Boqueron, Puerto Rico described in our cruising guide as “a beach-and-beer getaway for university students and bohemians.” I think tonight will be fun. Alas, we can’t dilly dally in PR because I’m registered for an 8-mile road race in St. John U.S. Virgin Islands next Saturday. That’s right! I’m running a road race after living on a boat for almost four months. We’ll see how it goes. Wish us luck getting there on time!