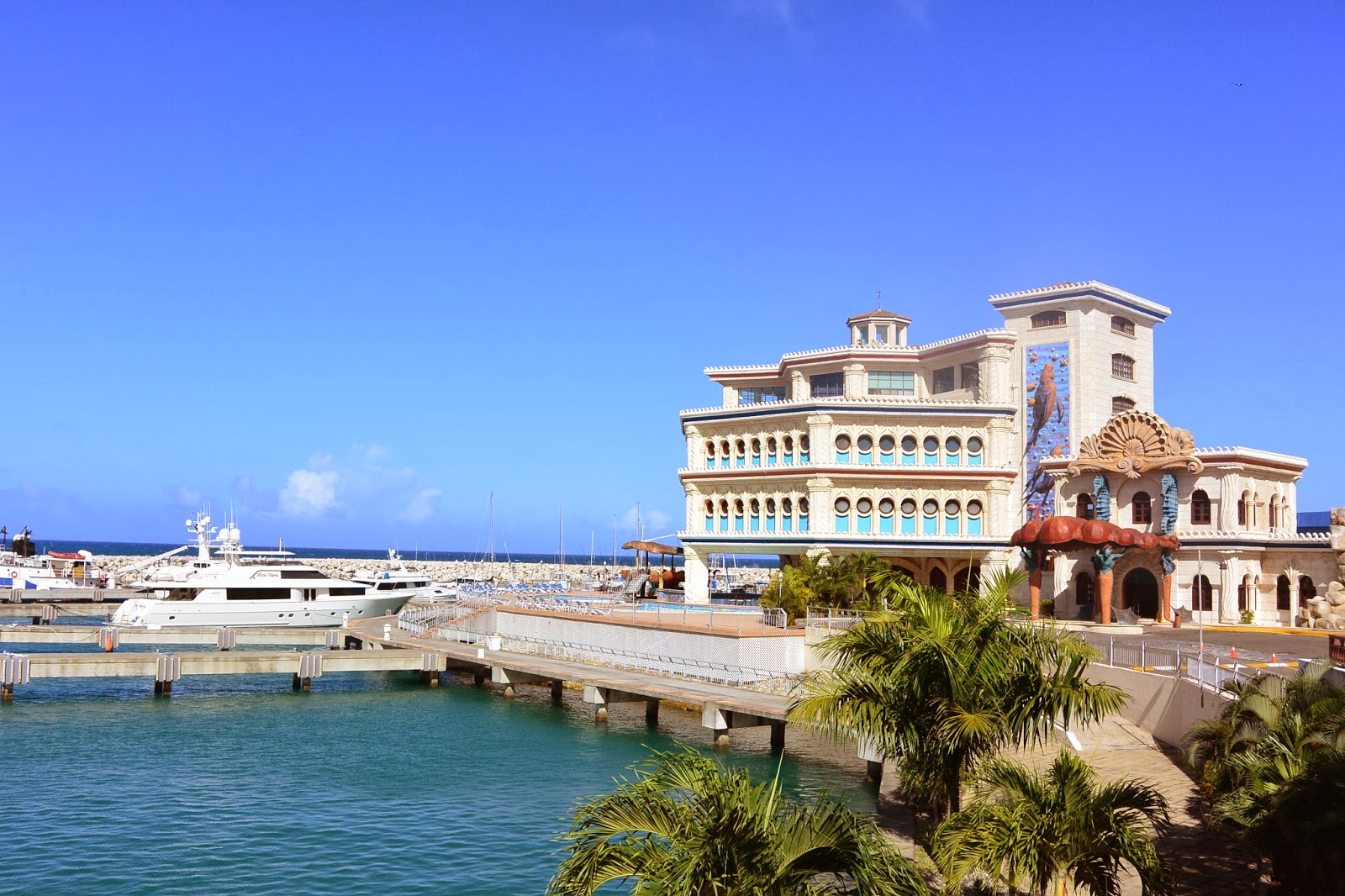 We’re still here on the north shore of the Dominican Republic. Pinned down by weather, we’ve made approximately 20 miles of progress in the past two weeks. We’re currently “stuck” in the luxurious Ocean World Adventure Park, Marina, and Casino near Puerto Plata. How did we end up in such swank accomodations?

After our last post we spent close to a week in Luperon. The cruising community is tight knit in that small outlaw town, so we made some great friends. We spent our nights drinking at the gringo bars and days doing various boat chores or exploring the nearby countryside. Several boats made the crossing with us from Providenciales to Luperon, so we shared a common history and a bond of open ocean hardship. Four boats became especially bonded: Eventyr, Elysium, West Wind, and Ninth Wave. Not only did we come from the same place, we were headed in the same direction.

The fun group of nine of us booked a trip together to explore the "27 waterfalls," a local attraction we were told was a must. After a couple shots of mamajuana, a spiced rum conconction involving honey and wine, we hiked the 35 minutes to the top of the waterfalls. The guides had us wear helmets and lifejackets and we started the descent jumping, swimming, sliding, and wading. 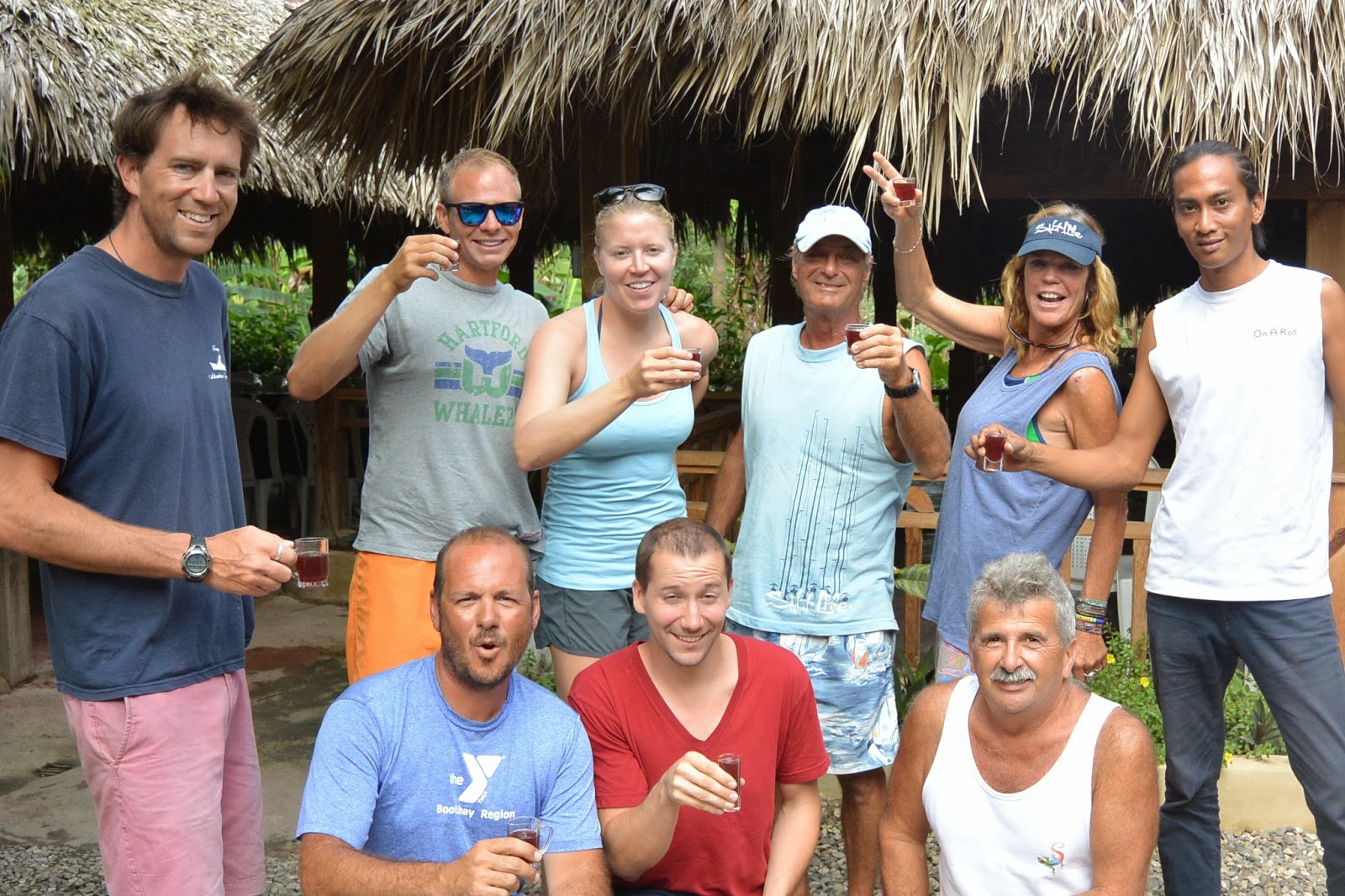 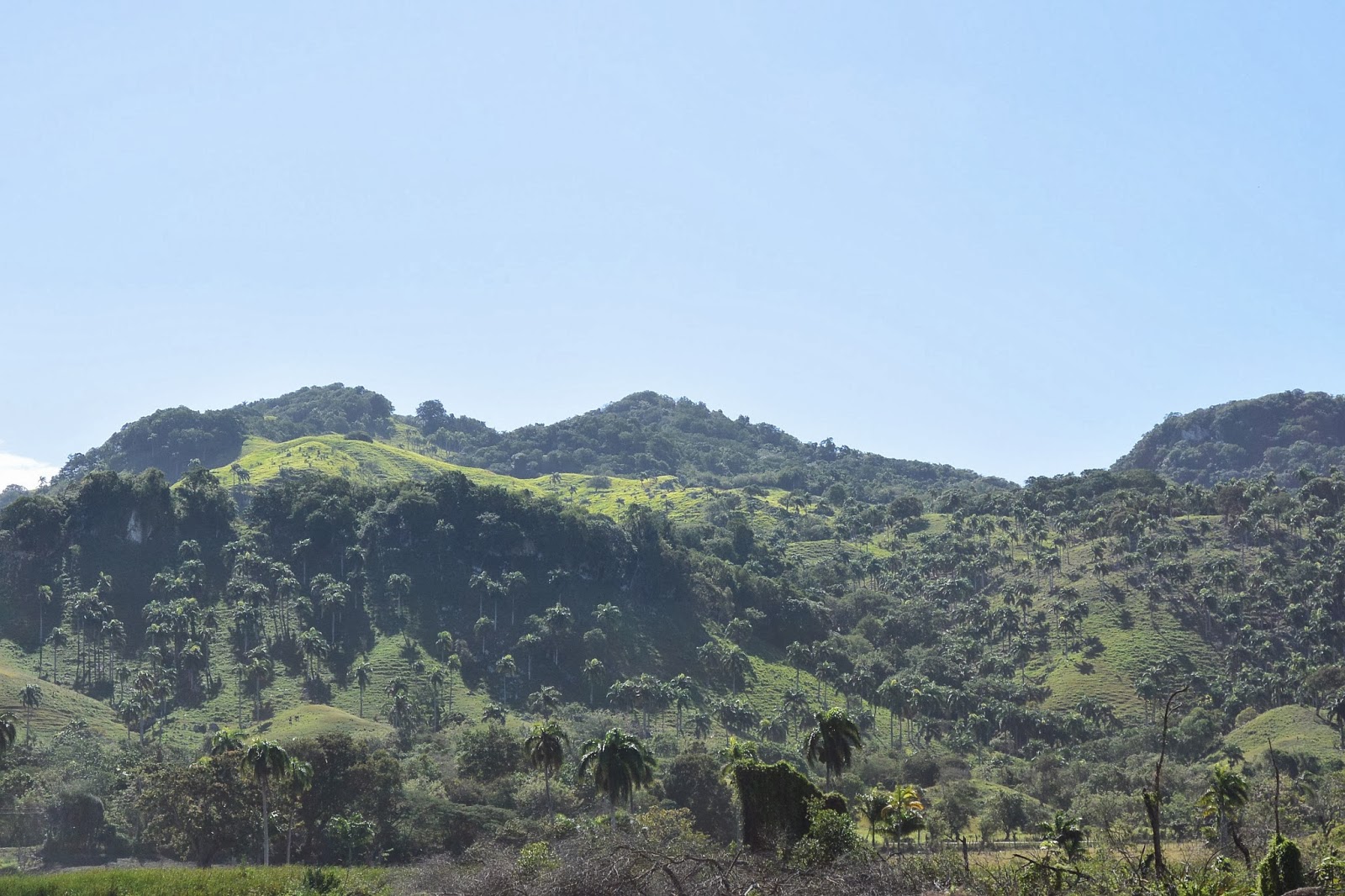 As an example of the party atmosphere of our new friend group: on the way to the waterfall, Ryan from Elysium "iced" Rowan from Ninth Wave. "Icing" involves presenting someone with a warm Smirnoff Ice, and the icee must take a knee and chug the entire bottle. Rowan did it like a pro! 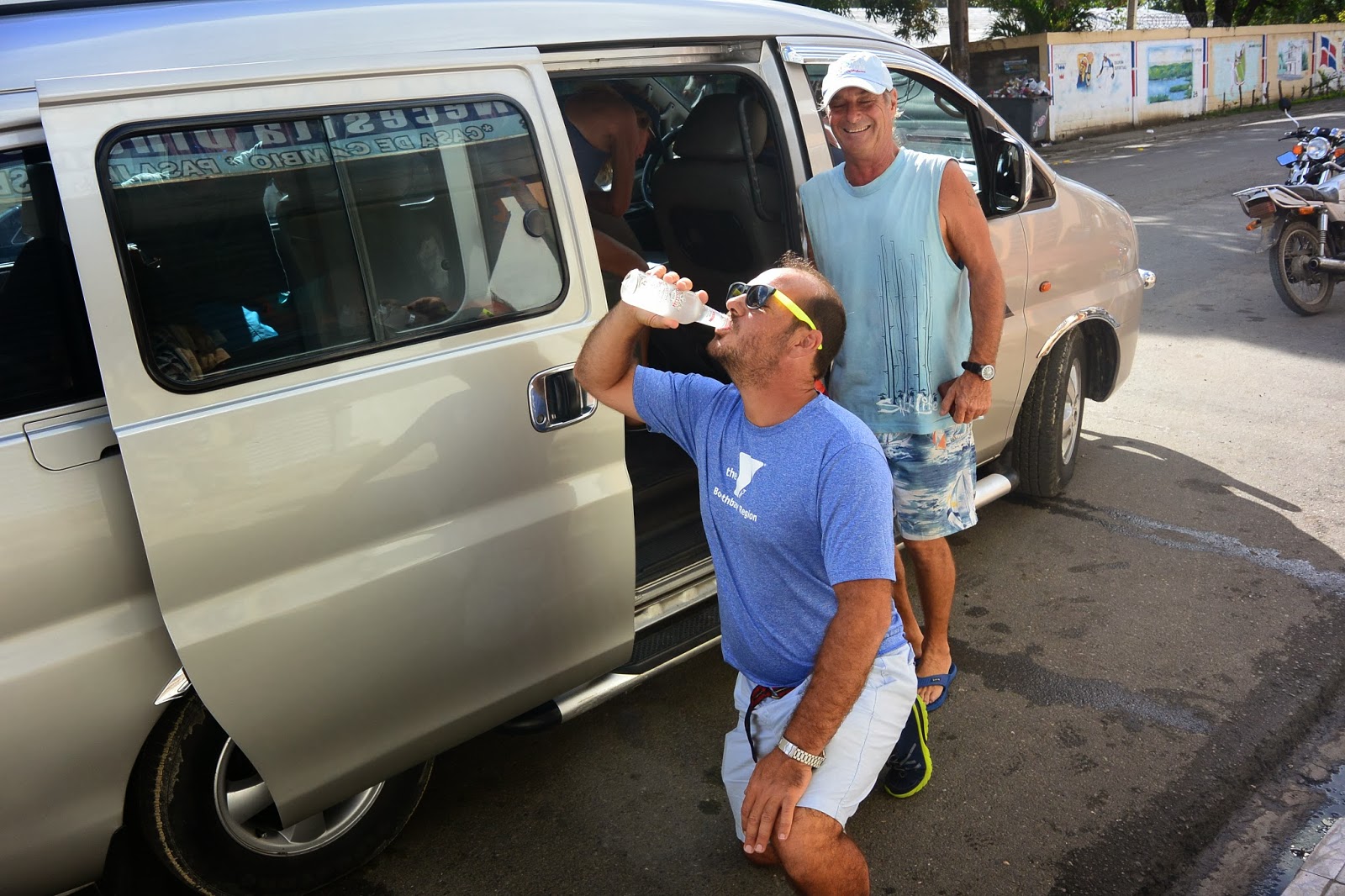 Soon after the waterfall trip, Ninth Wave declared that we had a weather window coming up on Monday and we all needed to jump on it to get further east. I wasn't sure about the weather window because the weather forecasts I saw indicated more of the same: strong east winds and large seas every day. The three other boats all decided to go, so Dana and I discussed the options and decided to give it a go. We figured if we got out there and it was too rough, we could always bail and stop into Ocean World to wait for better weather.

The Super Bowl happened to fall on the night before our early morning departure, which put a little kink in the plans. We got everything done on the boat to be ready to leave and headed to a Super Bowl party at Wendy's Bar in Luperon with all the crazy cruisers. They had hot dogs on the grill for less than 50 cents and it almost felt like being in the States. Almost…aside from the fact that the projector overrode the weak electrical system every few minutes causing the bar to go dark and the owner to run around frantically changing fuses and plugging and unplugging various devices. 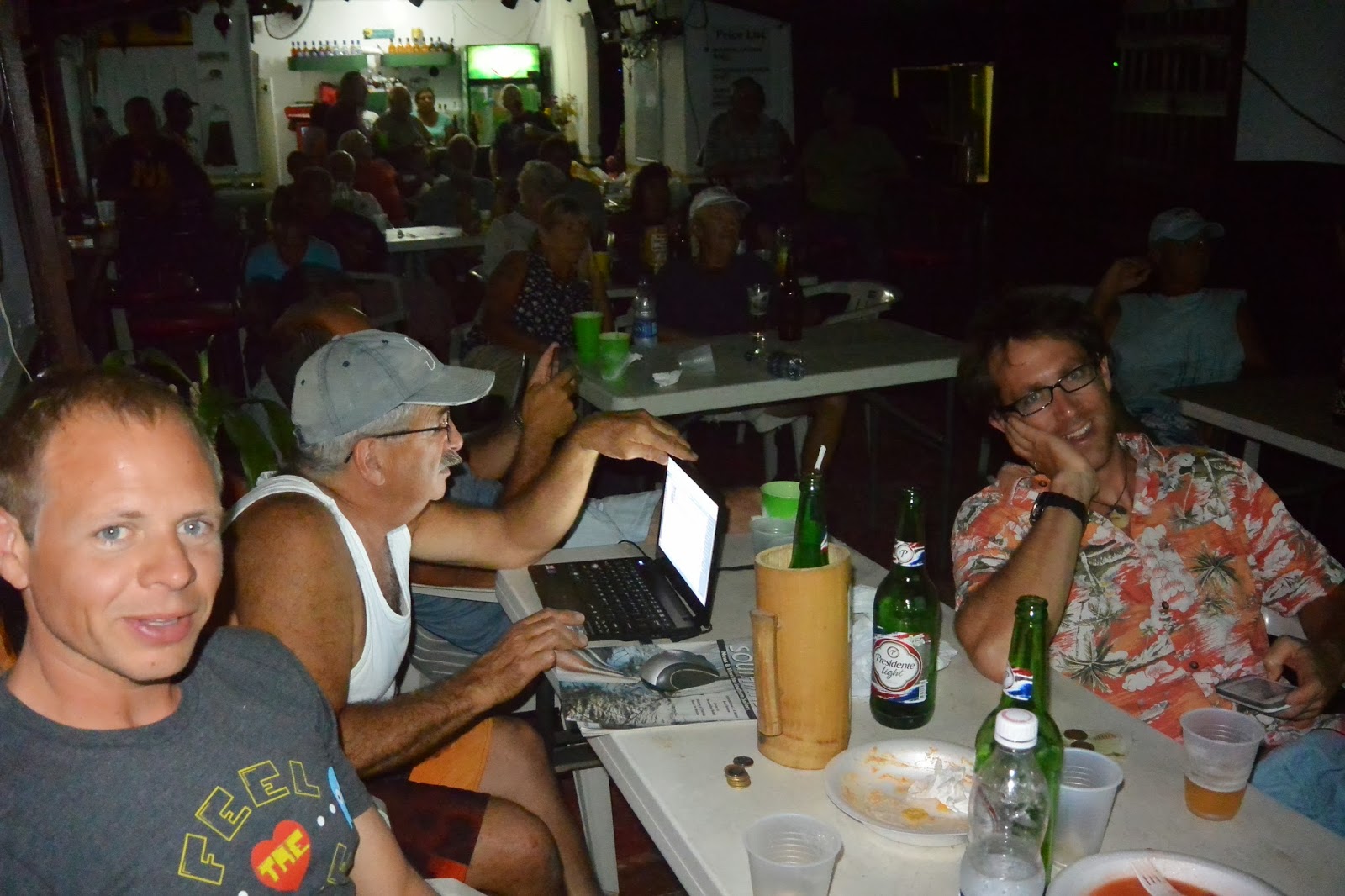 The next morning, Dana and I were up before the sun bringing the dinghy on deck and getting everything locked down for the trip. Customs visited the boat and we took off with a beautiful rainbow off the bow. The three other boats followed behind and we headed out into the open Atlantic. Within a few minutes, Dana started looking green and headed down below. She was fully sea sick for the first time on the trip. She curled up in the fetal position in the cabin as we beat through high seas. I made the executive decision that we would divert to Ocean World, since we had more than 10 more hours of this ahead. West Wind followed suit and the other two boats headed on toward the eastern end of the Dominican Republic and eventually Puerto Rico. We just learned that they made it successfully to the north coast of Puerto Rico through big and scary seas. I'm glad we diverted. 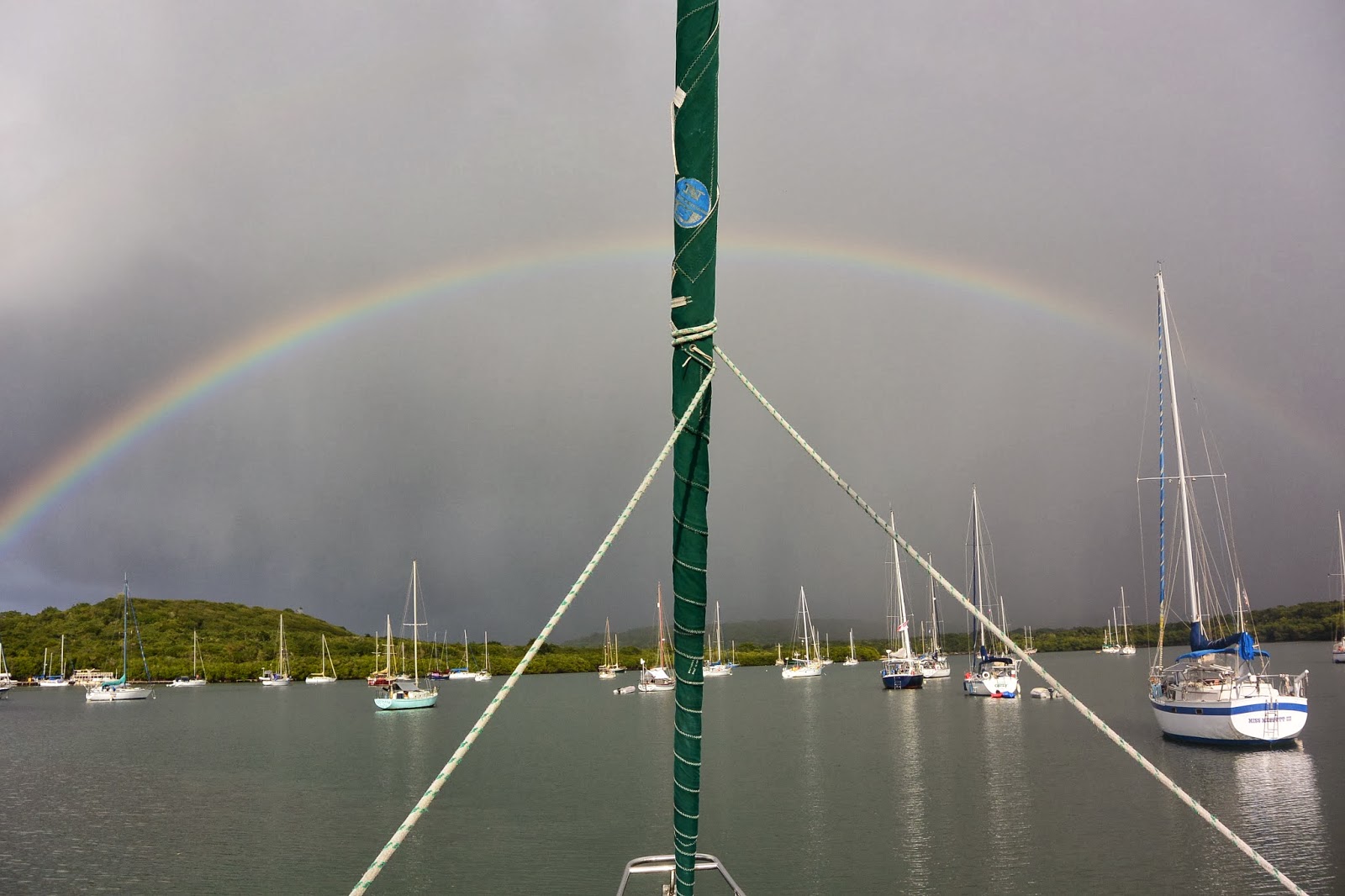 Later in the day, after arriving at Ocean World, when Dana's "sea sickness" did not improve upon arriving on land, we started to wonder whether the multiple rum punches at the Super Bowl party may have been to blame.

Hanging out in Puerto Plata, we've gotten to eat lots of great Dominican food and explore beautiful countryside. We took a trip to Caberete yesterday with Leslie and Chris from West Wind. Caberete is where our friends Chris and Hanna lived for years and Dana and I visited back in 2009. It brought back great memories spending time on Kite Beach, where hundreds of kite boards fill the water and sky. We even found an Irish bar with Philly roots. 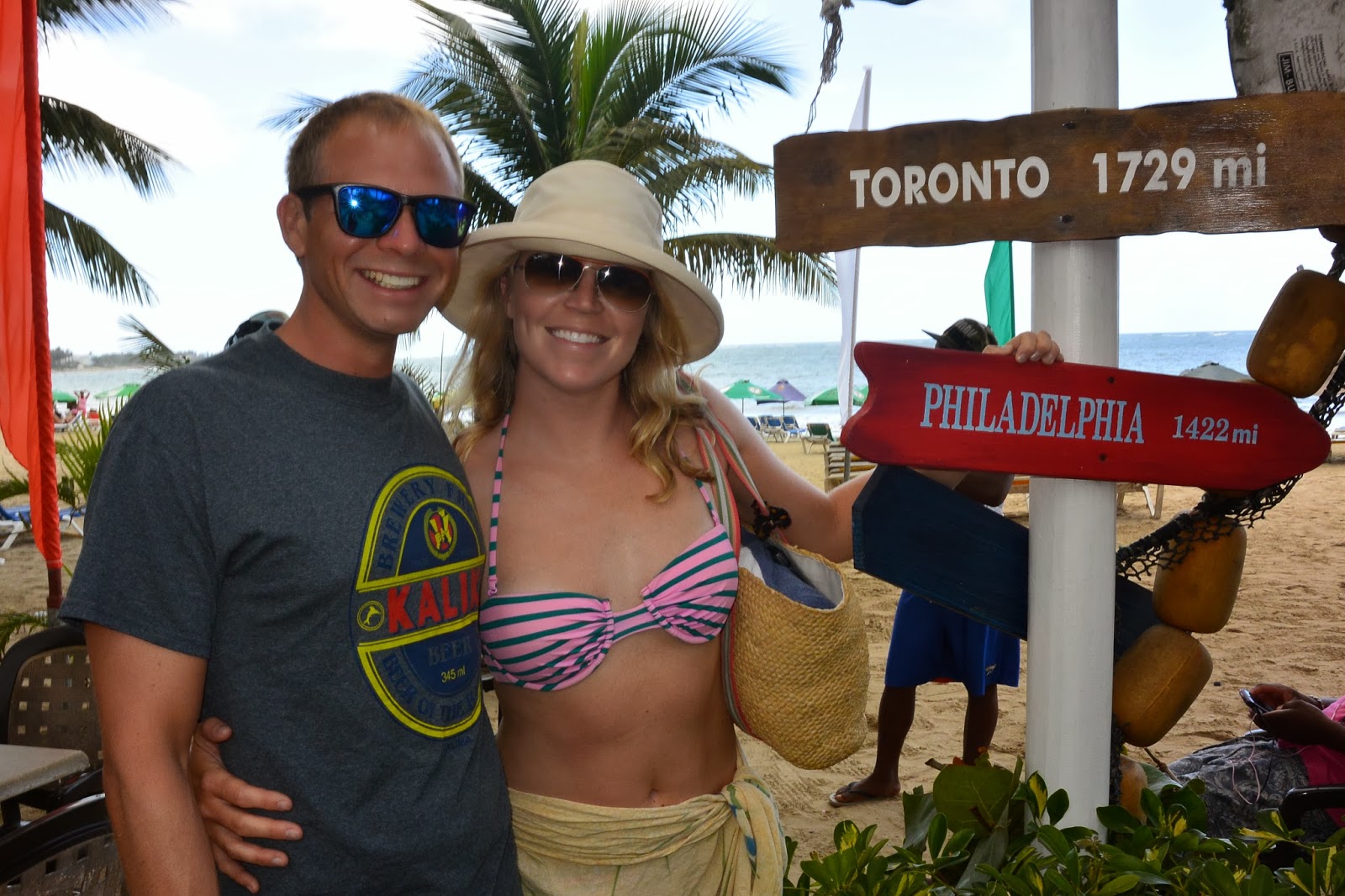 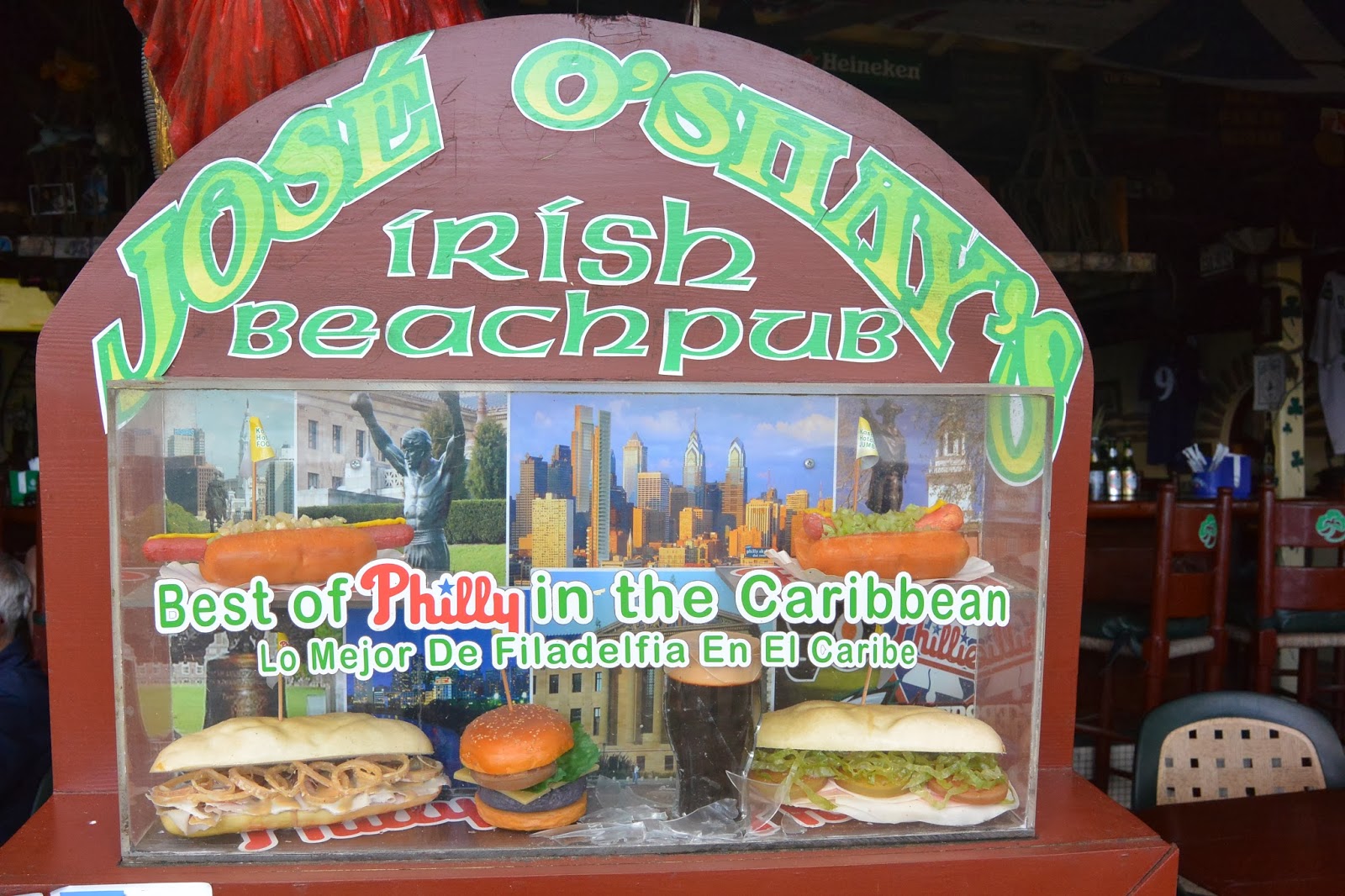 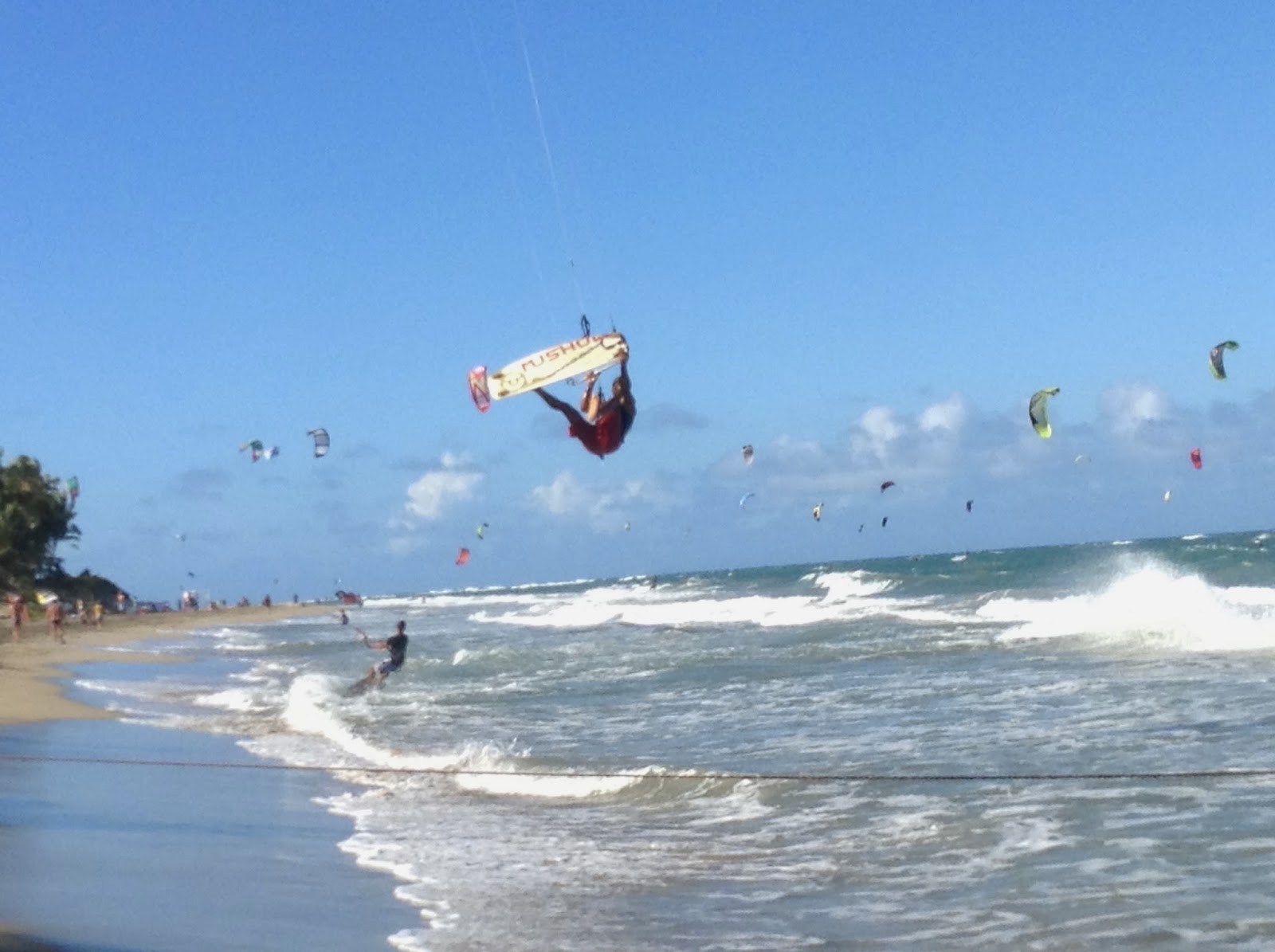 On a sad note, we had to say goodbye to our friend Peter on West Wind who flew back to Florida a couple days ago. We had a great time with him over the past couple weeks after meeting in Providenciales. We'll definitely keep in touch! 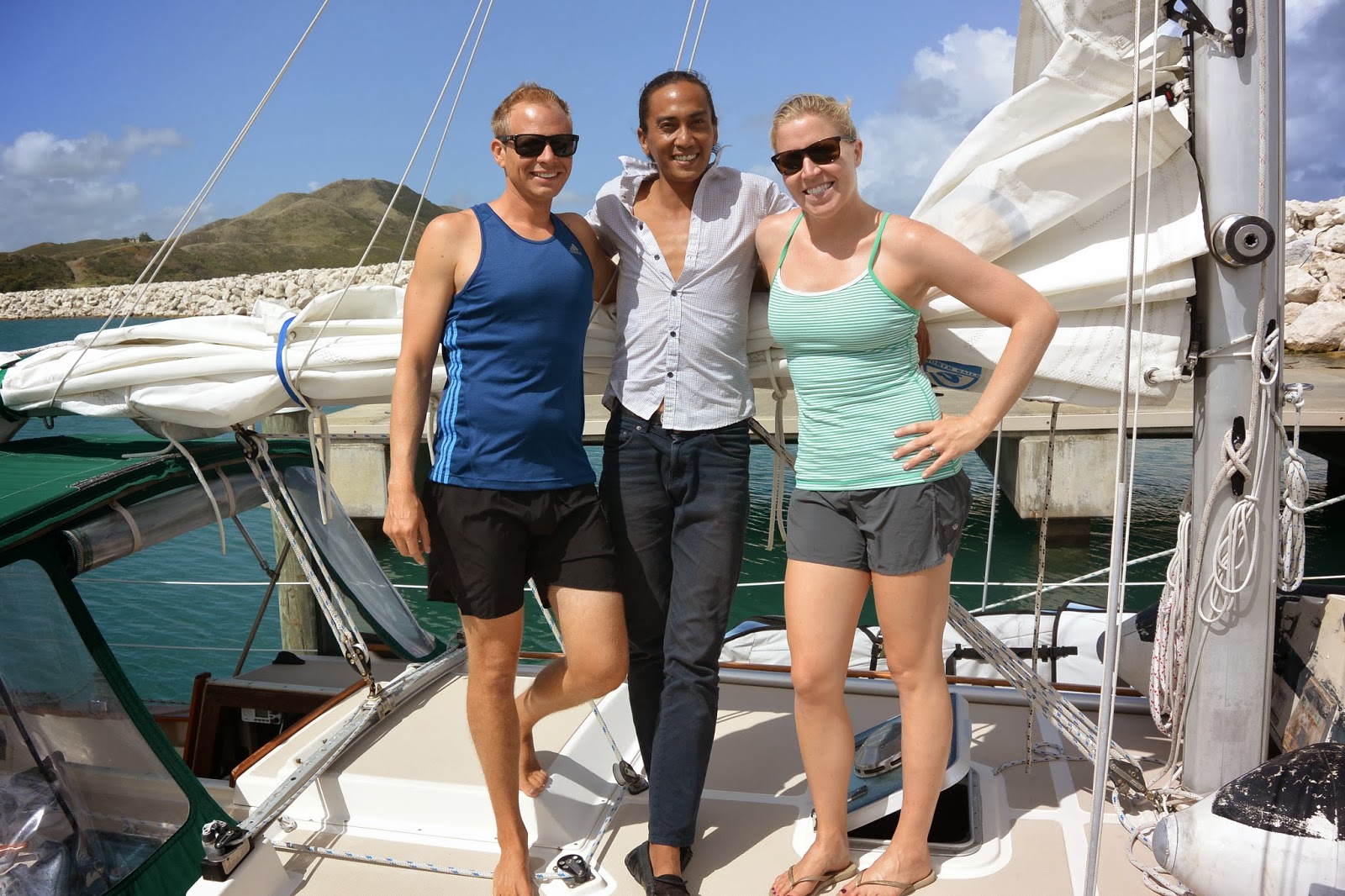 Tomorrow, Dana and I will take another shot at heading east. We've been promised a great weather window by a professional meteorologist at the Caribbean Weather Center, so we should be able to make it all the way to Punta Cana in three days. We'll have to sail through the night again, but hopefully the seas will be much kinder. Once in Punta Cana, we'll wait for another weather window to travel the 85 miles across the Mona Passage to Puerto Rico. Our friends, the Manginos, had to cancel their trip, so we don't feel quite so bad about getting to PR later than expected.
Posted by Unknown at 2:52 PM