Caught my first Mahi on the sail to Dominican Republic

Mahi Mahi, a.k.a. Dolphin fish, a.k.a. Dorado, has been my quarry this entire trip. I heard many tales about cruising sailors catching the tasty and hard fighting fish while sailing in the open Atlantic. However, I had no luck on our previous crossings. With some new lures Patrick brought me from the states, and fishing knowledge gleaned from Luke in Providenciales, I was optimistic about my chances during this last sail.

Sure enough, in the early afternoon of our second day sailing from Provo to Luperon, Dominican Republic, I hooked a huge fish. It started stripping line off the reel like nobody’s business! In the scramble to slow the boat and position myself to fight the fish, the line went slack. Whatever trophy fish was back there, it broke the hook right off the large cedar plug lure and escaped. I was a little disappointed but not deterred. I put out two lines and we resumed sailing.

Within the hour, the other reel started squealing as the drag released line and I yelled, “fish on!” We were better prepared this time and immediately let out the mainsail to slow the boat and Dana reeled in the second line. I sat back and started reeling. The prey was obviously smaller than the one that broke my lure, but still put up a valiant fight. When the great fish was close to the boat, I could see its dazzling green and yellow coloring and knew I had a Mahi. I put on some gloves and hauled it into the boat. Mahi are absolutely beautiful, especially when just caught, but they tend to lose their color after they die. I used alcohol in a spray bottle on the Mahi’s gills to end it’s suffering and got to work filleting the good sized catch. Filleting a fish while kneeling on a cockpit bench in rolling seas is no easy task, let me tell you! By the time I bagged up a few pounds of boneless fillets my fingers and knuckles were all knicked up from the sharp fillet knife. A small price to pay for the sautéed Mahi and grilled fish tacos we enjoyed over the next couple days. We even got to give some of the catch to one of our cruising buddies who helped me get my new outboard engine running a bit better. 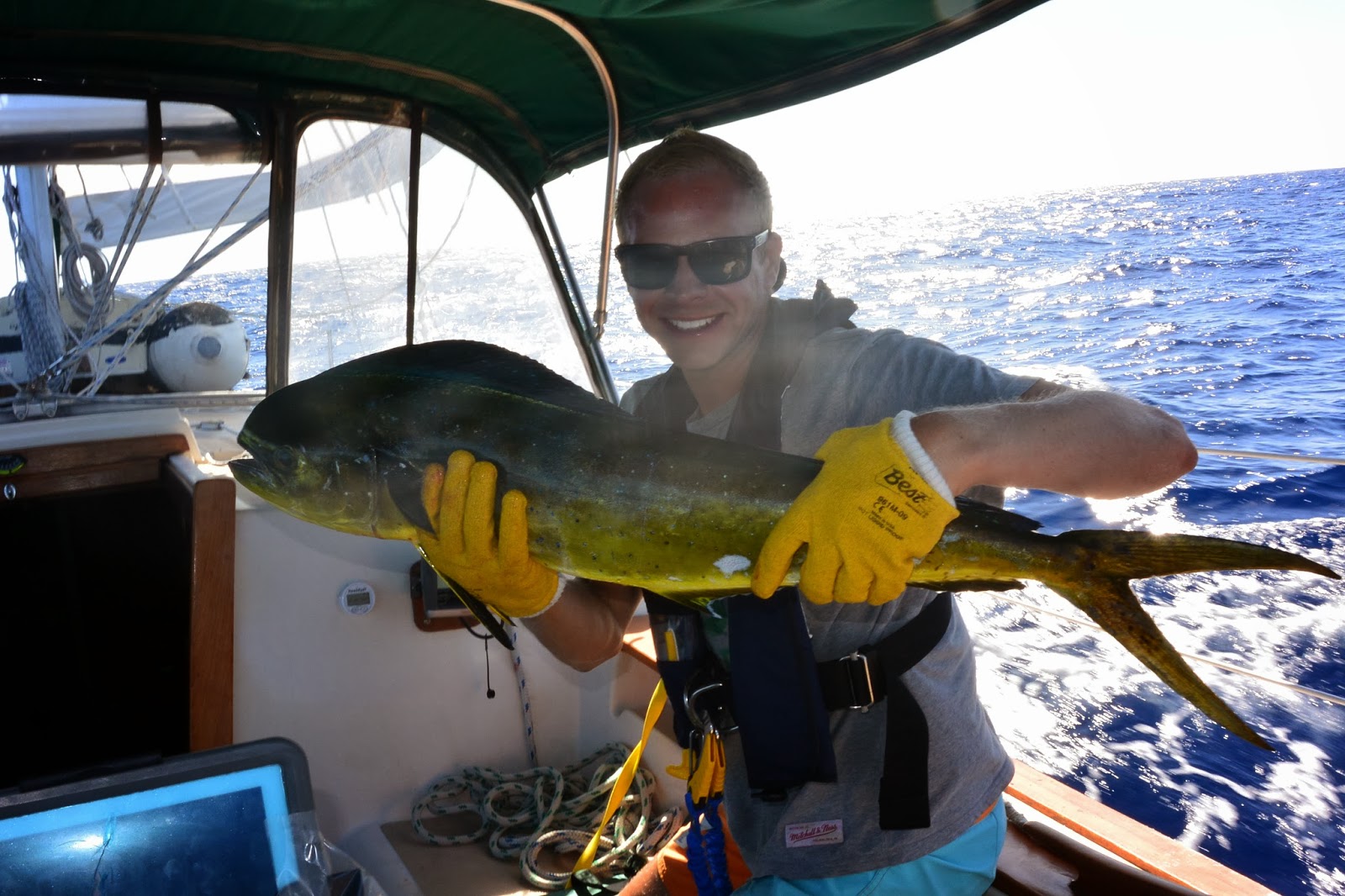 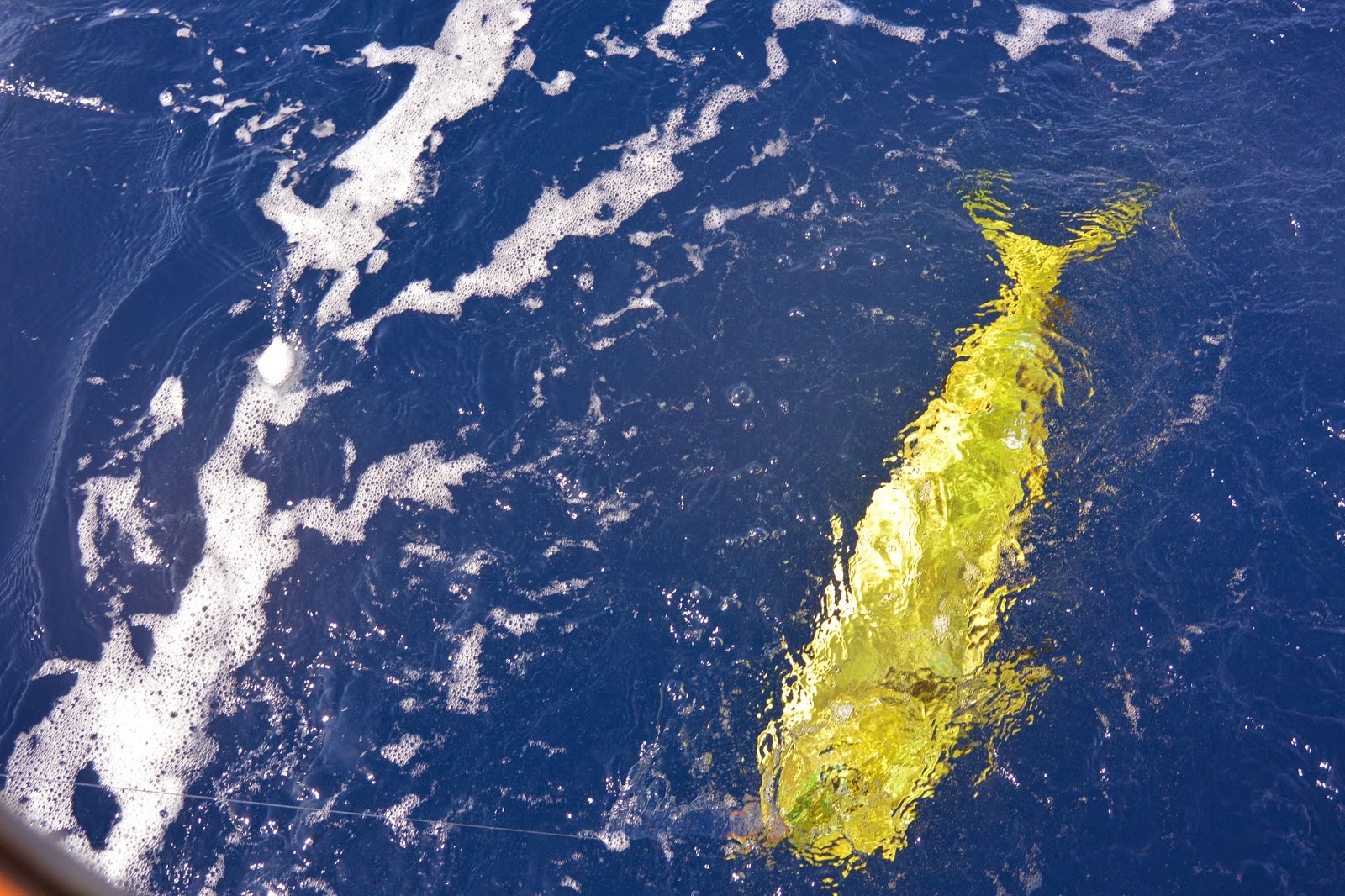 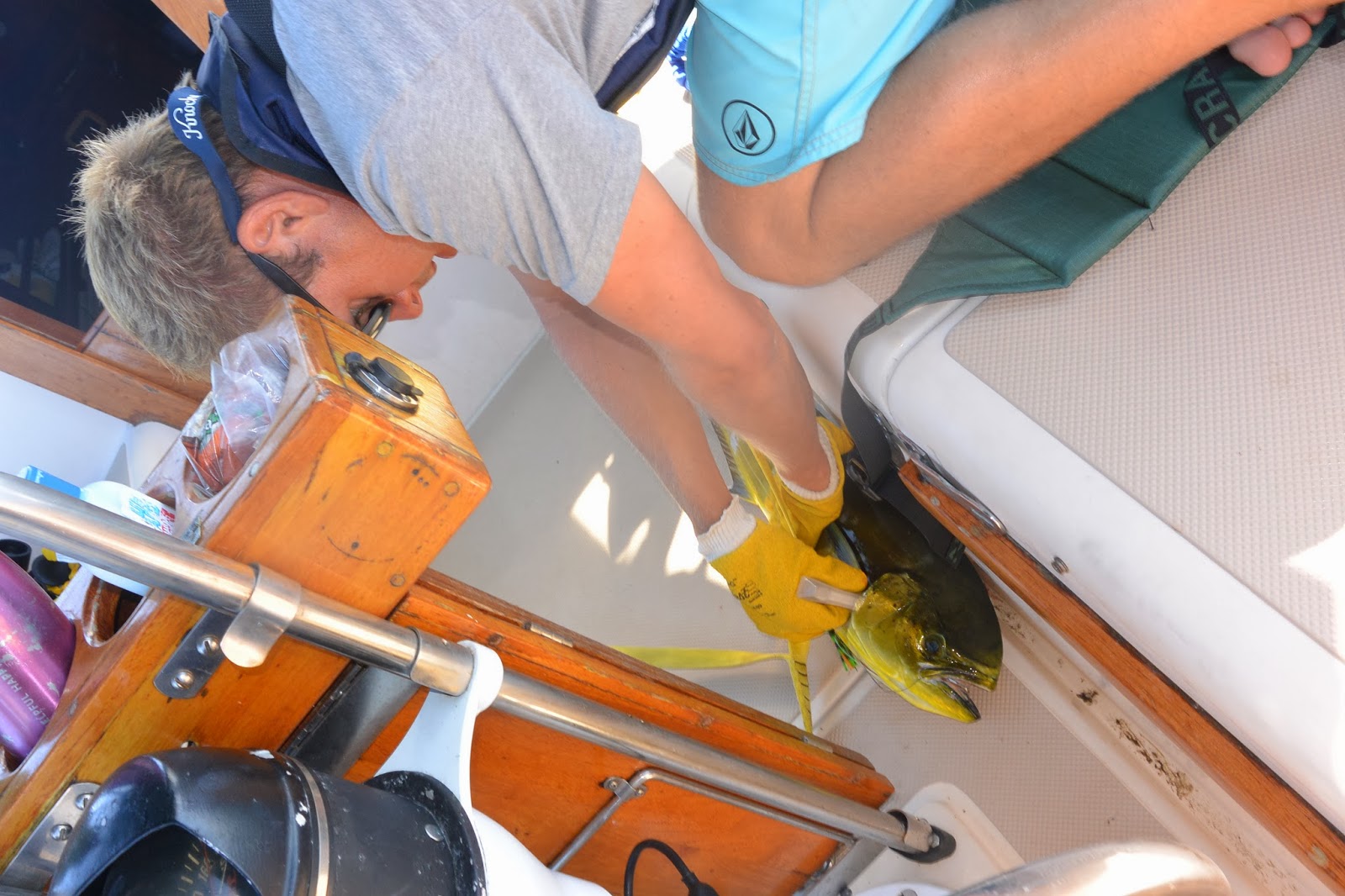 That was the high point of the sail. What followed was a miserable night’s slog through high wind, large scary seas, and constant soakings from waves breaking into the cockpit. Soon after the sun sank below the horizon and the conditions were already miserable, I noticed Dana was teary. She explained, “I don’t like this. I’m scared.” I completely understood how she felt and wanted the whole ordeal to be over with ASAP as well. But, I also knew we were in a very seaworthy boat, and although the conditions were uncomfortable, they were not to the level of jeopardizing our safety. We donned our offshore lifejackets, turned on the autopilot and hunkered down for a long night at sea.

During the overnight of constant pounding from wind and waves, Dana felt sick but still managed to complete her shifts at the helm. If I had to do any work down in the cabin, seasickness gripped me as well. The ocean, which appeared wondrous and lovely on previous night sails, seemed treacherous and daunting that night. The wake of our boat was again filled with thousands of bioluminescent fireflies. When I looked to my left (the direction from which the waves were coming), I occasionally saw those fireflies above eye level. The cockpit is 4 feet above the water line, and my head is a few feet above that. The approaching wave, then, was at least seven feet. In the dark with no moon, you couldn’t see the waves approaching until that last second. Maybe it was a good thing we couldn’t really see what was going on out in those confused, raucous seas.

Usually, Eventyr would slide up and over the waves, but frequently a wave would dump gallons of stinging salt water right in your faces, as if out of nowhere. On multiple occasions, a wave would break over the top of our bimini (the sun cover over the top of the cockpit, which is several feet above our heads).  We motor sailed all night, since the wind direction was not right for us to sail without the engine. In the pleasant afternoon earlier that day, we sailed for several hours without the engine, although it put us several miles off course. We didn’t want to waste any time sailing out of our way overnight. We just wanted to get the trip over with as quickly as possible. Even with the combination of engine and reefed mainsail, we could hardly maintain 4 mph into the heavy seas. I kept telling Dana, “All the books say it will get calmer when we get in the wind shadow of the Dominican Republic. Don’t worry, it’ll get better soon.”

Well, it never did. I slept about an hour that night and Dana didn’t sleep much more. I constantly worried that a wave would take the dinghy, my surfboards, or our anchors right overboard. I knew I tied them down well, but the ocean was powerful and relentless with waves breaking over the bow again and again. When we finally spotted land at about 7:30 am, it was a welcomed sight, even though it took us almost four more hours through the same high seas to get to the mountainous coastline.

So much for our weather window! Several other boats left Provo the same morning as us, some headed for Luperon (the closest port in the Dominican Republic from Provo), others for further destinations. One boat was attempting to go all the way to Puerto Rico. Well, let me tell you, they’re all here in Luperon. No one made it further. We’ve been swapping horror stories at the bar each night. Dana was not the only crying crewmember among our group of sailboats. The consensus is that the winds were sustained at 25 mph or higher and the seas were as big as 10 to 12 feet that night. We do not want to go out in that again!

Now we’re in Luperon, which is the third world compared to the relatively clean and extremely expensive Turks & Caicos. Although trash lines the streets and rivers, we’re happy to be here. There’s a real energy in this town where small fresh produce stands and fish markets abound. Trucks drive down the narrow streets blaring music and selling plantains, bananas, mandarin oranges and mangoes out of their trunks. Dogs, cats, sheep, chickens, and even cows roam the streets. The locals are extremely friendly but poor and constantly want to help you with this or that to make some money. It’s a refreshing change to pay $7 for a nice dinner and less than $2 for a 22 oz. beer instead of the $65 I paid for a case of canned beer in Provo. I even got a haircut for less than $5! 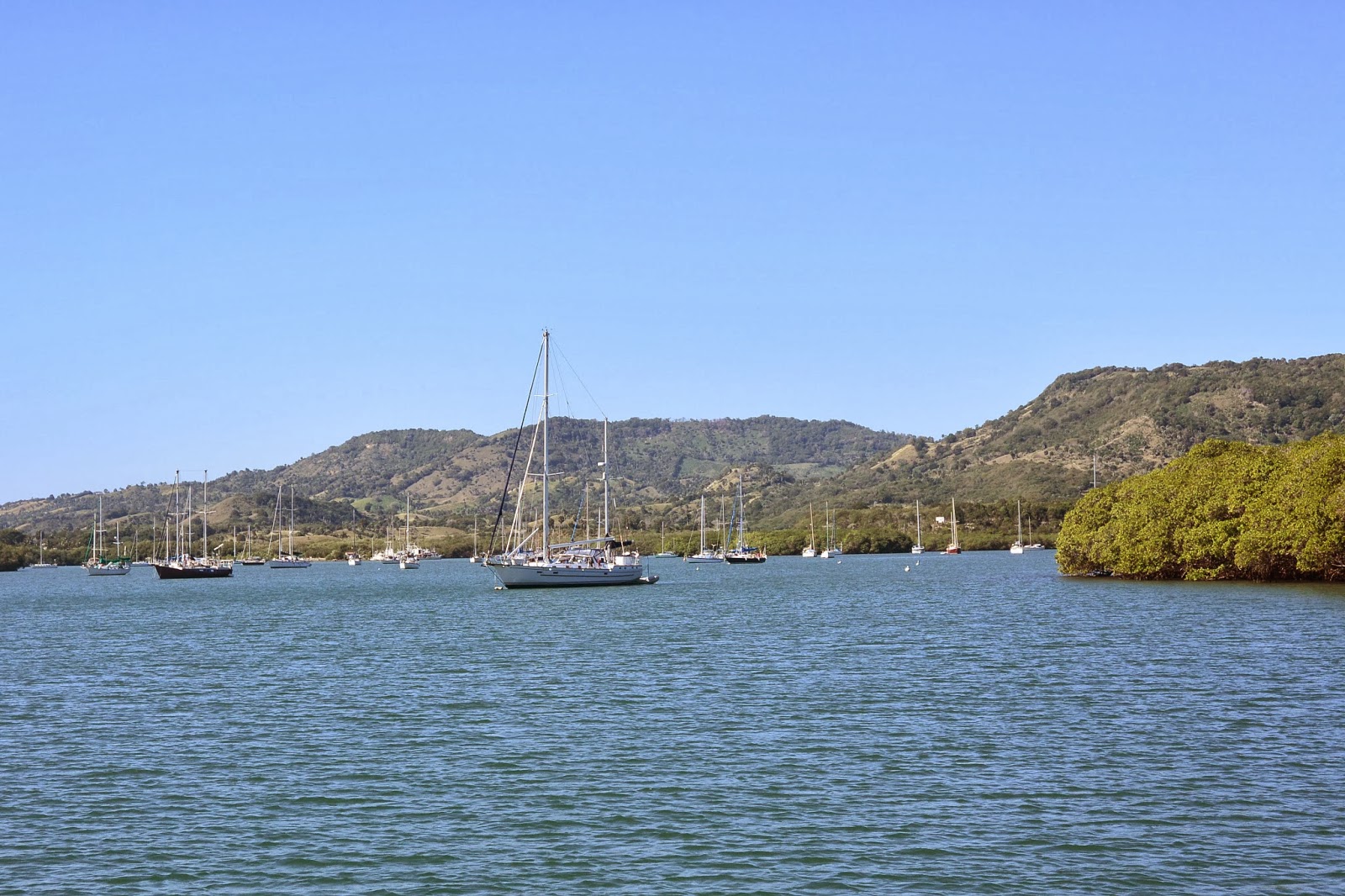 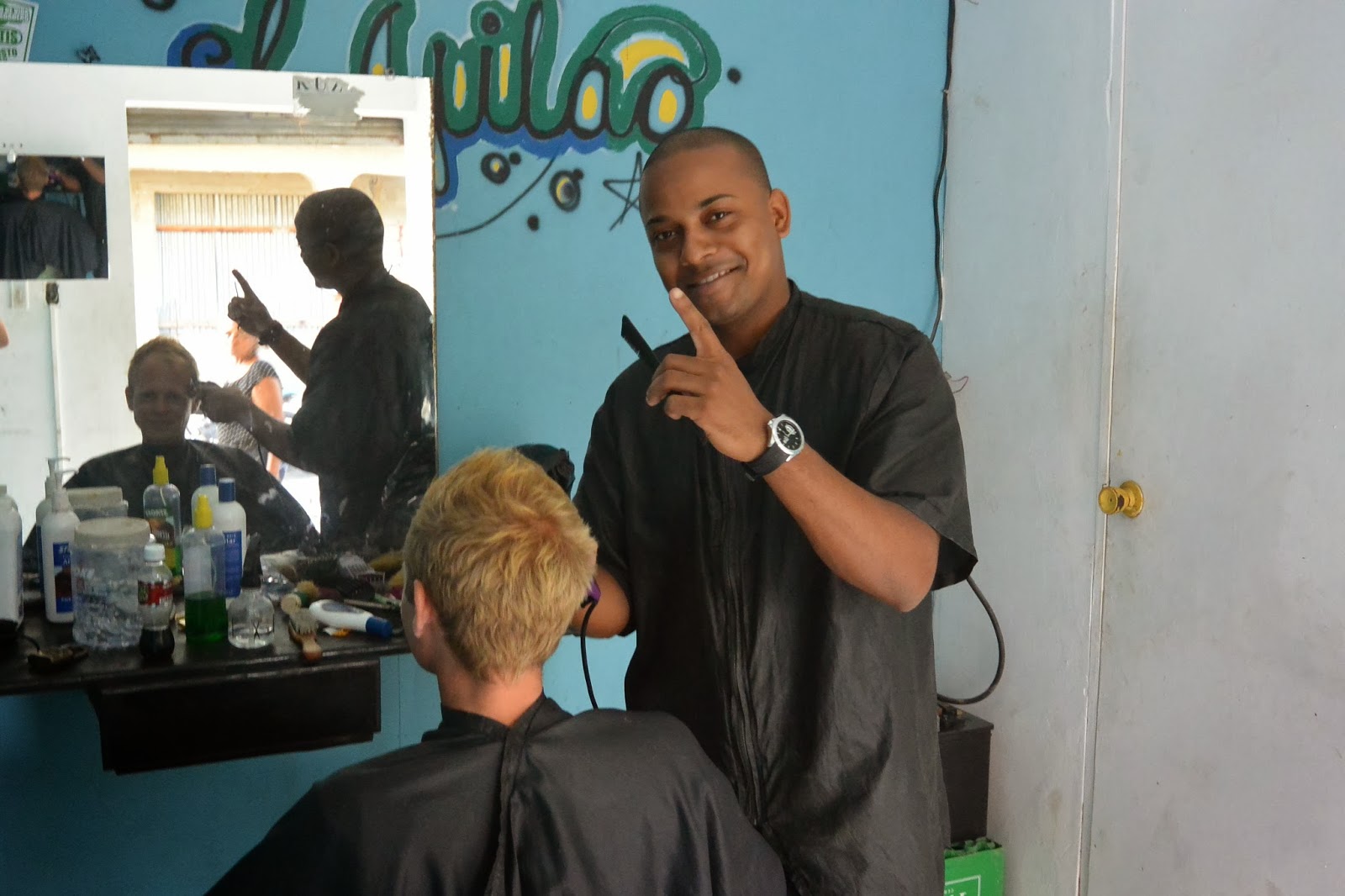 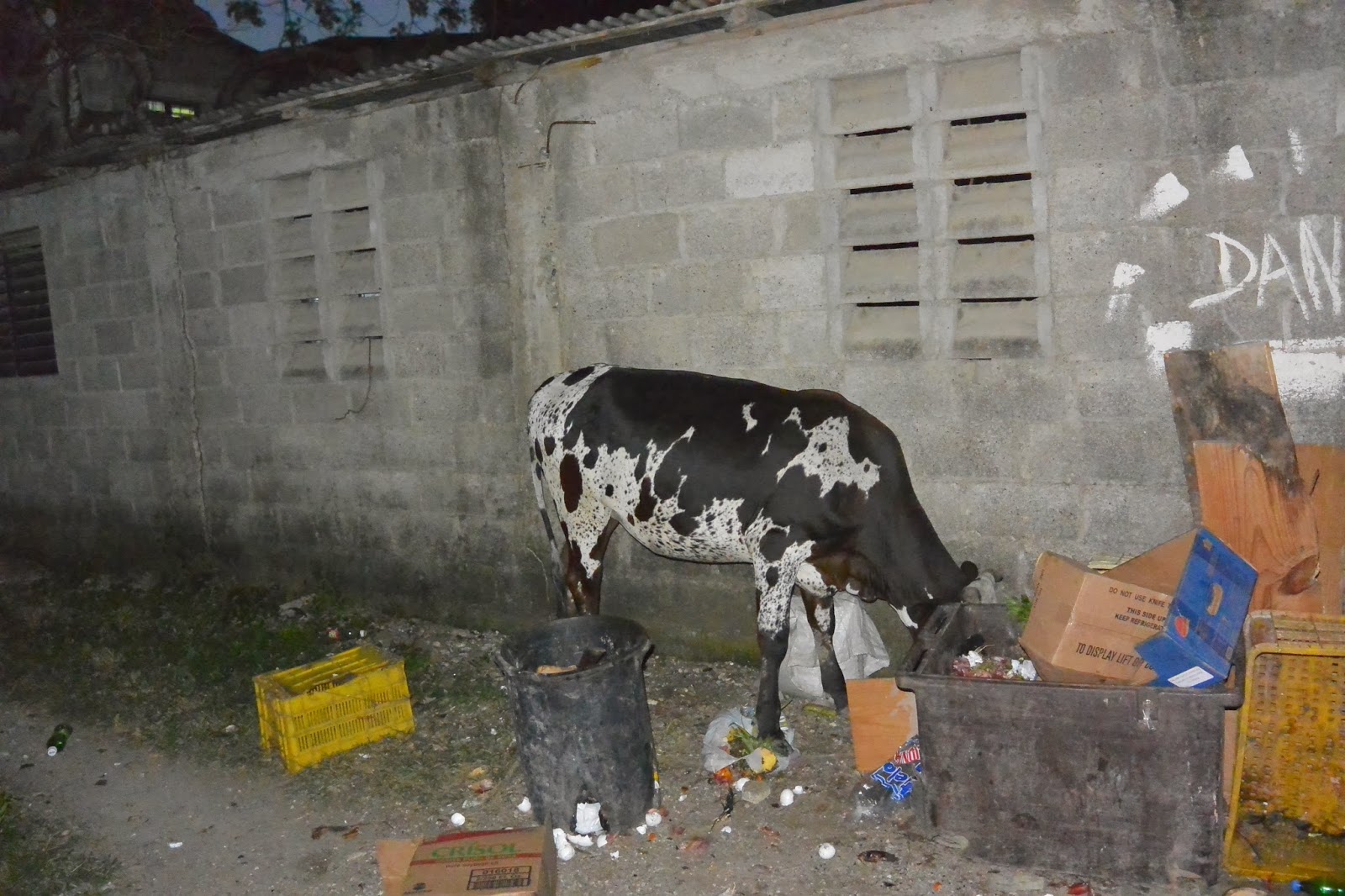 The harbor in Luperon is well protected with dense mangroves on all sides and is filled with sailboats. Some, like us, are cruising sailboats passing through. Some are rusting hulks left by cruisers who never made it further. Some are the semi permanent homes of cruisers who stopped here months or years ago and never left. Each night at the bars, all the gringo sailors mix with the locals and everyone seems to have a good time. Dana and I are enjoying the scene so far, but eager to move on when we get the chance.

That said, the weather for moving east from Luperon is not looking favorable in the near future. The weather guru, Chris Parker, who runs a Caribbean weather forecasting website for boaters, warned that the strong winds will continue all week, only to get stronger over the weekend. We have to head due east toward Puerto Rico, which is, of course, directly into the strong prevailing trade winds. That, in conjunction with the fact that there are very few protected anchorages along the 80+ miles we have left to traverse of northern Dominican Republic coastline before crossing the treacherous Mona Passage to Puerto Rico, means that we need a number of days of calm weather to attempt the trip. Chris Parker declared that we might not be able to leave until the week of February 10th!

Dana and I are extremely perturbed by the news of being stuck in Luperon for so long. Not because we don’t like the Domincan Republic. We do! We’re upset because our friends, the Manginos, are flying into Puerto Rico from the 4th to the 10th and we were really hoping to spend time with them. I did almost all of my long runs with Mike Mangino training for several marathons and we ran together with Back On My Feet for years. The Manginos moved from Philly to Cincinnati last year, and it’s a rare chance we get to see them these days. We’ll keep a keen eye on the weather and jump at the first safe chance we get to sail on to PR.

We can’t control the weather, and neither Dana nor I want to be out in the kind of conditions we had to endure on this last crossing. Hence, we’re going to wait for good weather to make our next move. While waiting, we can rent a car to explore the Domincan Republic and enjoy the sights, sounds, smells, and tastes of this vibrant country.
Posted by Unknown at 3:10 PM