Boyle came and went since our last post and we made the best of the few days he was here. He flew into St. Maarten and Hanna retrieved him from the airport. We were in a marina to get the boat spruced up for his arrival. Thirty minutes after he brought his bags on board we pushed off from the dock and headed out to an anchorage. We got in some good diving off the boat and swimming in Marigot Bay. It was like old times! 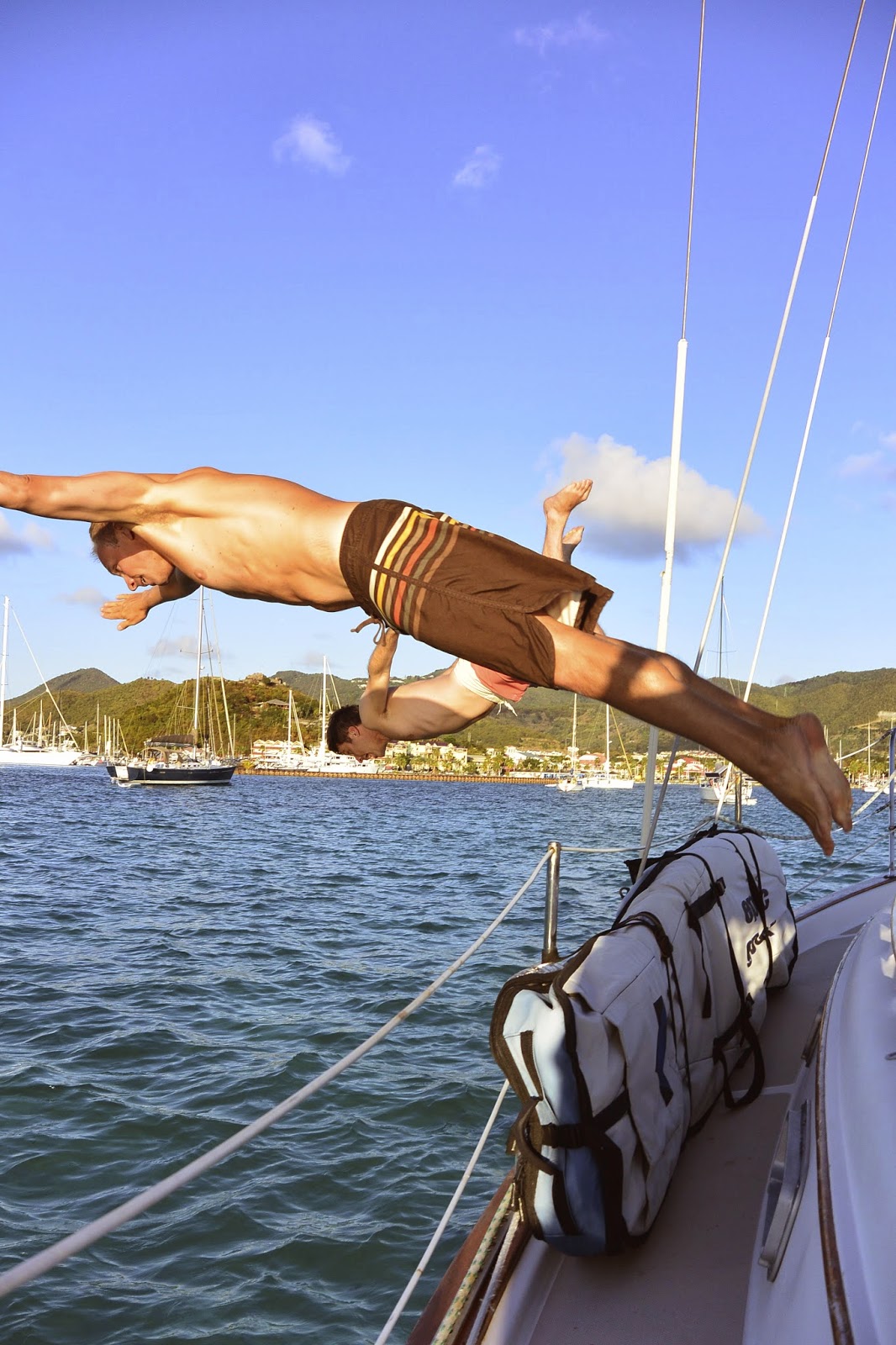 The next day we sailed across the St. Bart's channel to Ile Fourchue, an uninhabited island technically part of St. Bart. After anchoring in the calm bay, we dinghied to shore for a makeshift happy hour on the beach. We were treated to a beautiful sunset and had a great night’s sleep. The next day was filled with lounging and snorkeling before a leisurely down wind sail back to the Dutch side of St. Maarten (Sint Martin), where we anchored for the night. We fished throughout both sails and caught several fish. However, they were all mean looking barracuda, which aren't good for eating. Boyle and Hanna stayed in a hotel overlooking the anchorage for his final night and Dana and I had a nice night to ourselves on the boat. 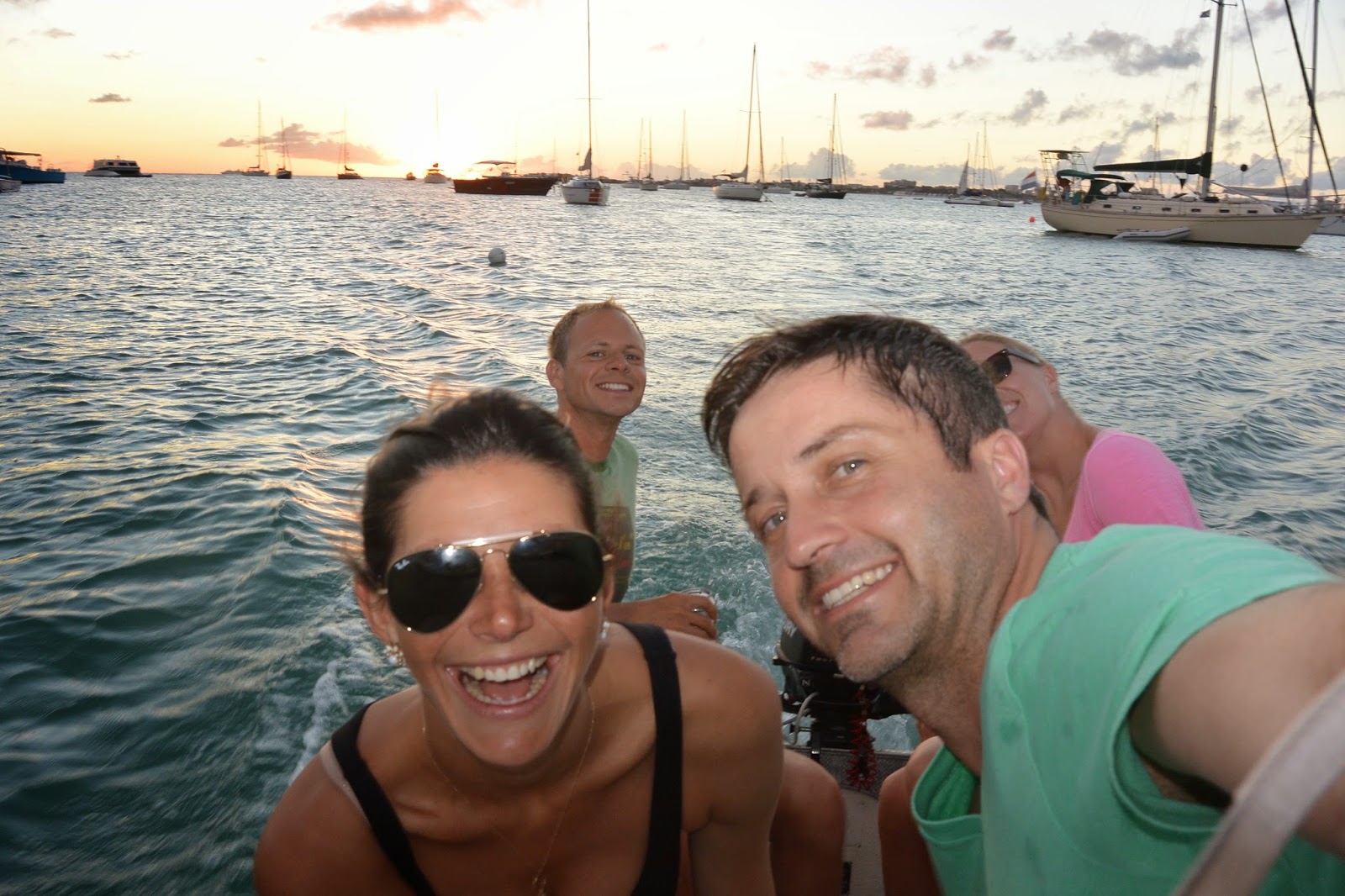 We were sad to see Boyle go, but he promised to visit again soon. Dana, Hanna, and I were up early the day after Boyle left to start a series of long sails south. We’re on a deadline again. Some of our friends from Old City in Philly are coming down to visit us in St. Lucia. Not just a couple or two…four couples. We’re SO excited to see them. We spent a bunch of time with them over the past year and can hardly believe they were able to organize a trip where ALL of them got to come. Of course they can’t stay on small Eventyr, so they’ll have their own lodging. We’ll be hanging out with them every day while they’re here, however, getting to relive the fun we had in Philly. That’s the good news. The bad news is they’d be here in a week and we had to get through five islands or so to make it down there.

From St. Maarten, Dana, Hanna, and I sailed south through rough seas and strong winds in the open ocean getting soaked by salty spray in the cockpit. It was an unpleasant sail to say the least. We made it to St. Kitts just before sunset and were happy to stay in a marina (the cheapest one we’ve found yet on the adventure!). We fit a lot in the next day to make the most of our short stay on the island. We started the day with runs and then planned to rent a car to see the sights. Unfrortunately, St. Kitts is a big cruise ship destination, so the cruise ship passengers had all the cars reserved.

Lucky for us, we were able to find a cabbie in Basseterre, the capital of St. Kitts, to drive us to the spots we planned to see. John, the cabbie, was great, and his taxi “Crunch Time” was even better. We fit a lot in: rainforest hike, tour of the island, saw some amazing vistas, and spent time at a nice beach. We also got our laundry done and diesel filled while in St. Kitts, so overall, it was a very productive stay. I even got to watch part of UConn's first round victory at a sports bar!

After St. Kitts, we had another long, arduous sail in rough seas to Montserrat. It was slow going, motoring into wind and waves, so we didn’t get there until sunset. We planned to stay the next day, but for the sake of having extra time at better places down the road we decided to anchor for the night and move on the next morning without checking into customs. Monserrat has an active volcano the destroyed the capital city, Plymouth, in 1997. Plumes of ash were erupting as recently as 2010. Passing by the south of the island, we saw the lava flows and the remains of Plymouth. Quite a jarring sight.

Yesterday’s long motor sail started in a calm manner but by noon became just as raucous as the previous two sails. Both Hanna and I lost our footing and flew across the cabin landing in heaps on the floor or settee when hit by large waves on separate occasions. We all had to hold on for dear life for several hours straight! I also lost one of my lures when a booby (seabird) swooped down and grabbed it out of the water, getting himself hooked. That poor bird was at the end of the line high in the sky and I had to cut the line so that he didn’t get tangled up in our sail or rigging. I hope he somehow got himself unhooked! Arriving in Guadeloupe, however, made up for the miserable sail.

We arrived in the small charming French town of Deshaies, Guadeloupe yesterday late afternoon and cleared customs. We explored the small little town and loved the place! This morning we felt like real Frenchmen (and women) feasting on baguettes, various meats and cheeses and a rotisserie chicken we brought back to the boat. We had another active day of running, snorkeling, hiking, and a cocktail at a restaurant overlooking the anchorage. The hike up a lovely river winding through the forest with various small waterfalls was especially nice! I carried a bota bag of wine, a la The Sun Also Rises, making it that much more European.


Tomorrow we head onward toward St. Lucia. The weather looks fine, so that will be a nice change. We will be making a shorter jump down to The Saintes, several islands on the south of Guadeloupe. These islands are known for their pristine waters and excellent snorkeling, so we’re looking forward to the stop.
Posted by Unknown at 7:34 PM