Sailing the Virgin Islands with Hanna 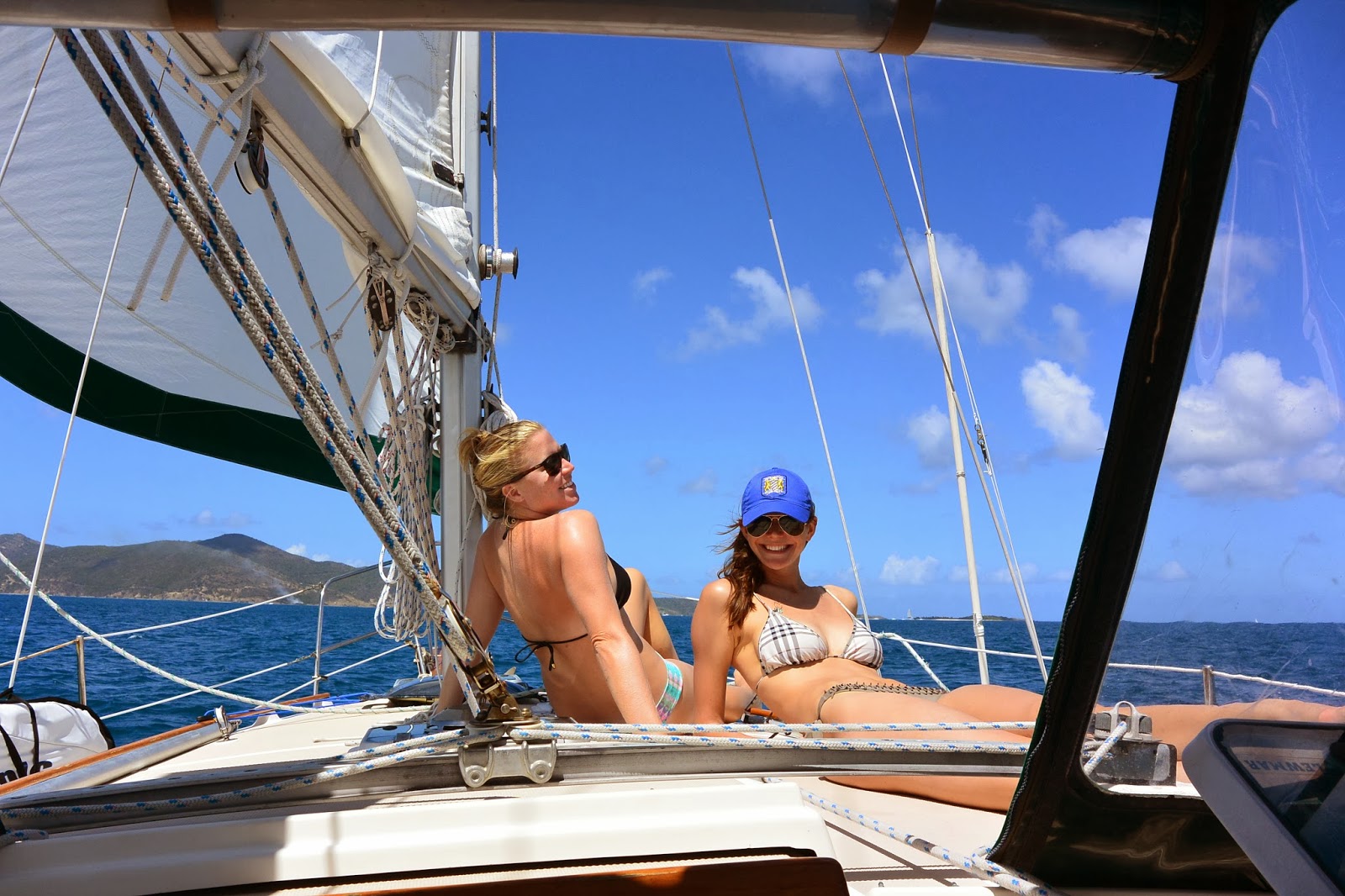 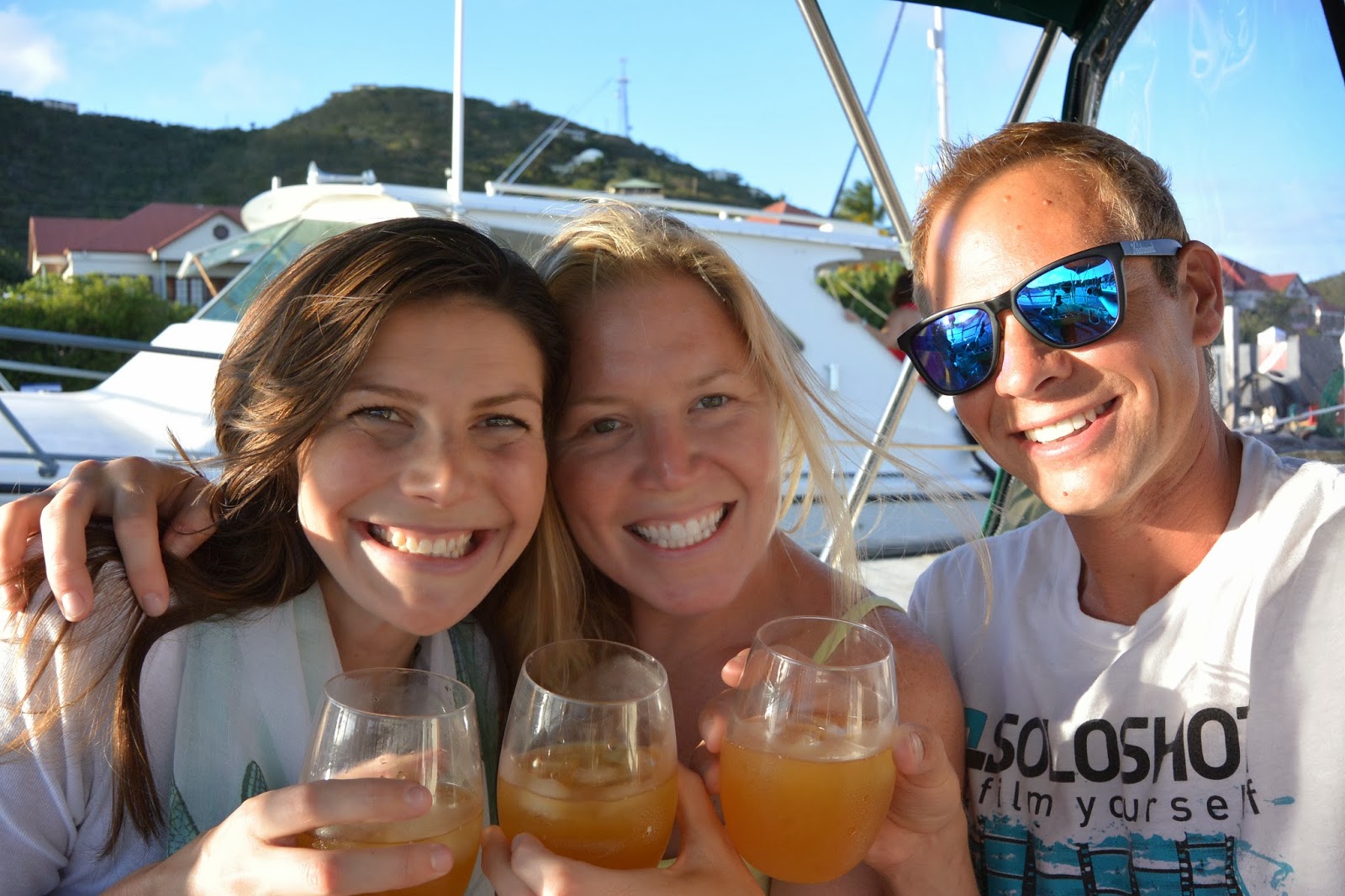 Hanna joined the adventure last Wednesday, and we’ve had an amazing week. After a night at a marina in St. Thomas, we sailed across the Pilsbury Sound back to St. John. Dana and I had yet to dinghy in to Caneel Bay, the resort where we were married, so we had a plan for the day. After picking up a mooring, we piled into the dinghy and headed for the resort’s dock.

Caneel Bay Resort provides quite a different experience if you are a guest in a wedding staying at the resort versus living on a sailboat on a mooring out in the bay. Before we could even tie off to the dock, we were greeted by a friendly but assertive Caneel Bay staff member who told us we were required to put out a stern anchor from our dinghy and could not enter Caneel Bay property past the bar/restaurant. We planned to walk to our wedding site to re-live that glorious day five years ago. It just so happened that the day of our return was the 11-year anniversary of our first date. It was a special day for us. Despite talking to a manager, who claimed it was a U.S. Homeland security issue, we were not allowed to walk to our wedding site. We settled for some frozen cocktails in the area we had our reception and headed out. We got a couple pictures of Turtle Point (our wedding site) as we motored past. 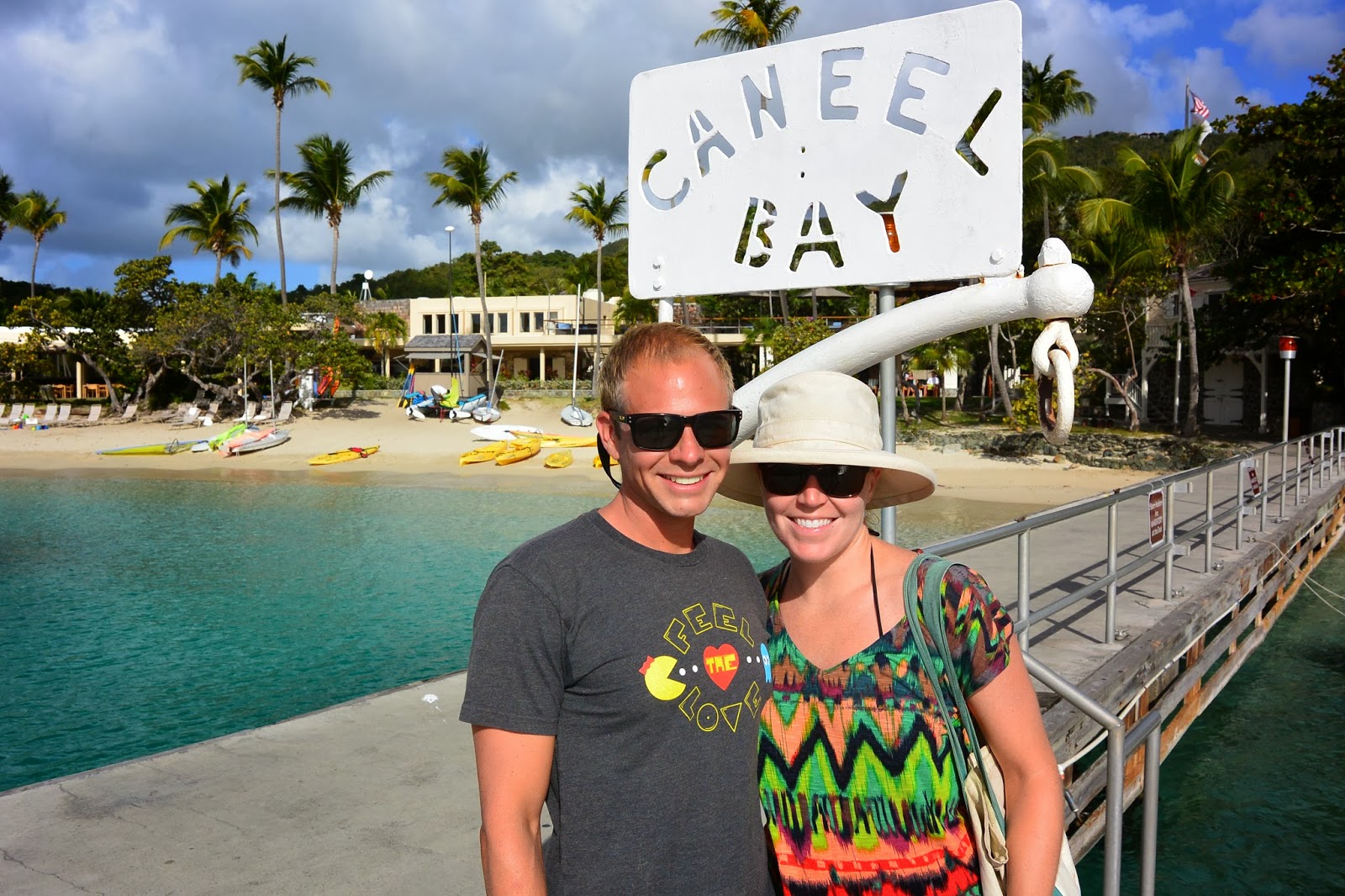 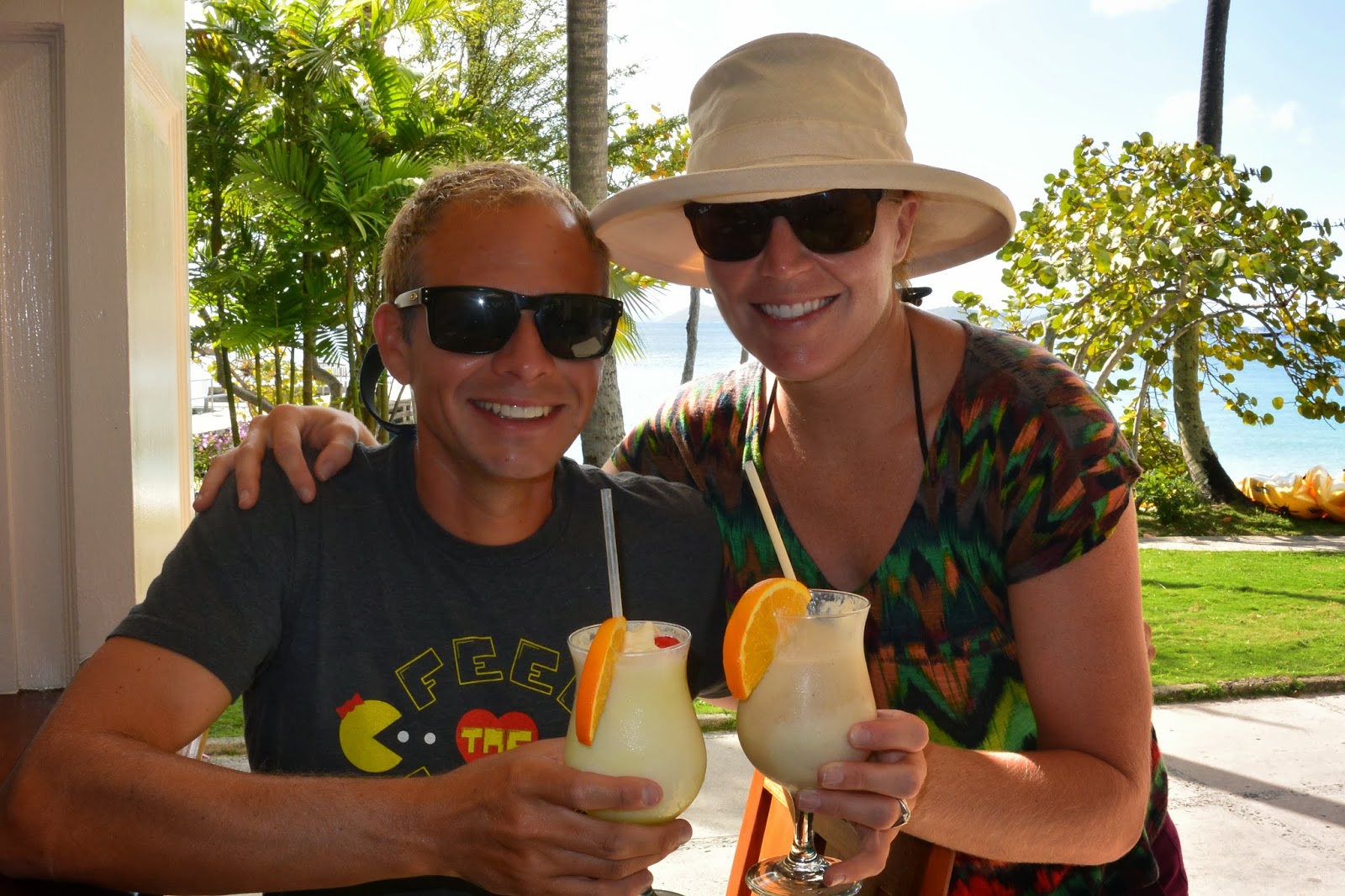 The next day was a fantastic day thanks to Tatyana and Terry. They recommended we snorkel and hike at Waterlemon Cay. They have a blog of their experiences living in St. Thomas, which has some unbelievable pictures and videos (lifeinUSVI.com) It really makes you want to pick up and move the Virgin Islands! We hooked up to a mooring, spent the night, and were up early for a day of exploring. After hiking to some sugar mill ruins with a breathtaking view, we strapped on our snorkel gear. The little cay was small enough to swim entirely around, marveling at colorful coral and a wide array of tropical fish. Too bad it was national park land, or I could have speared us a nice yellowtail snapper! 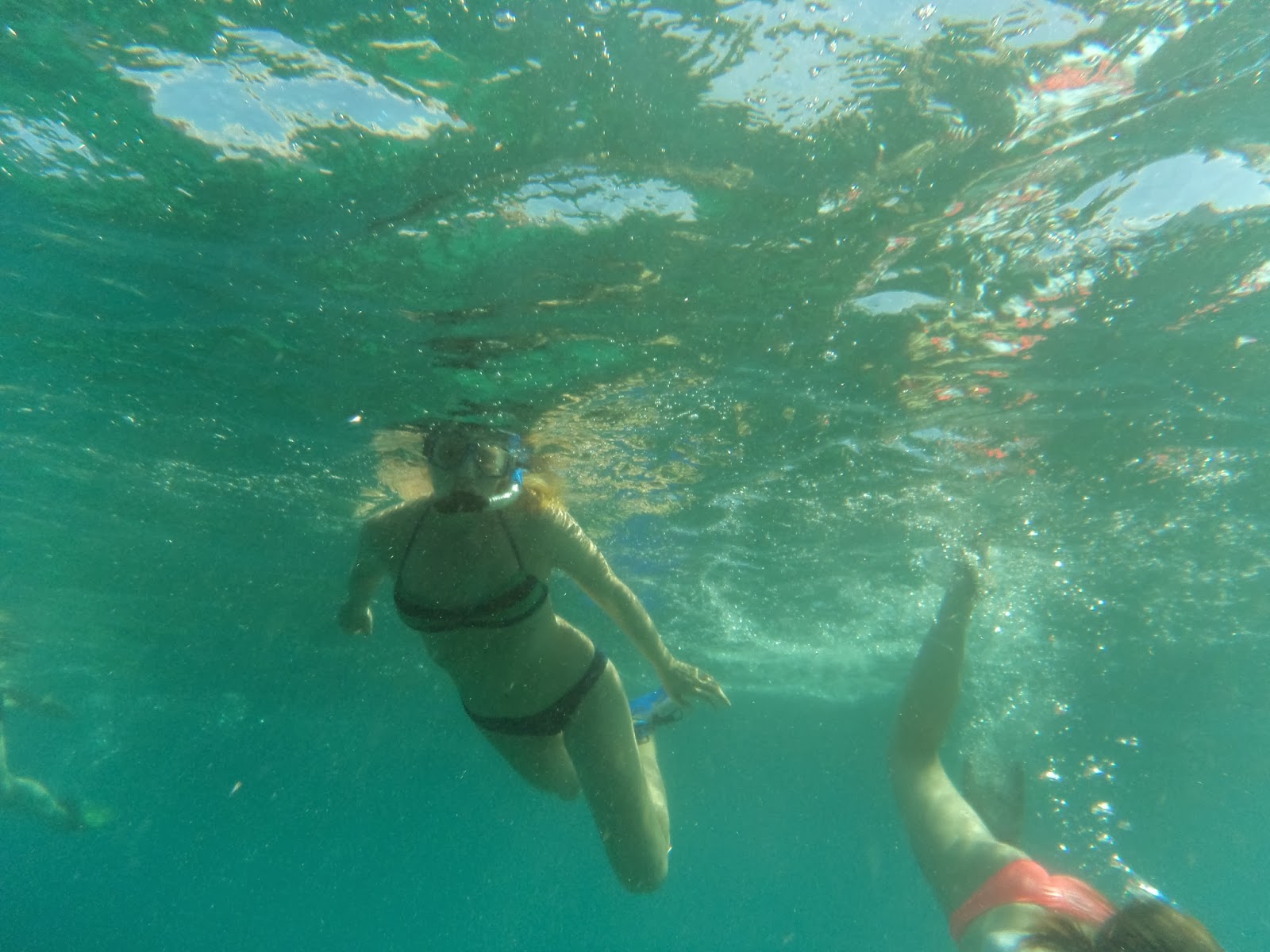 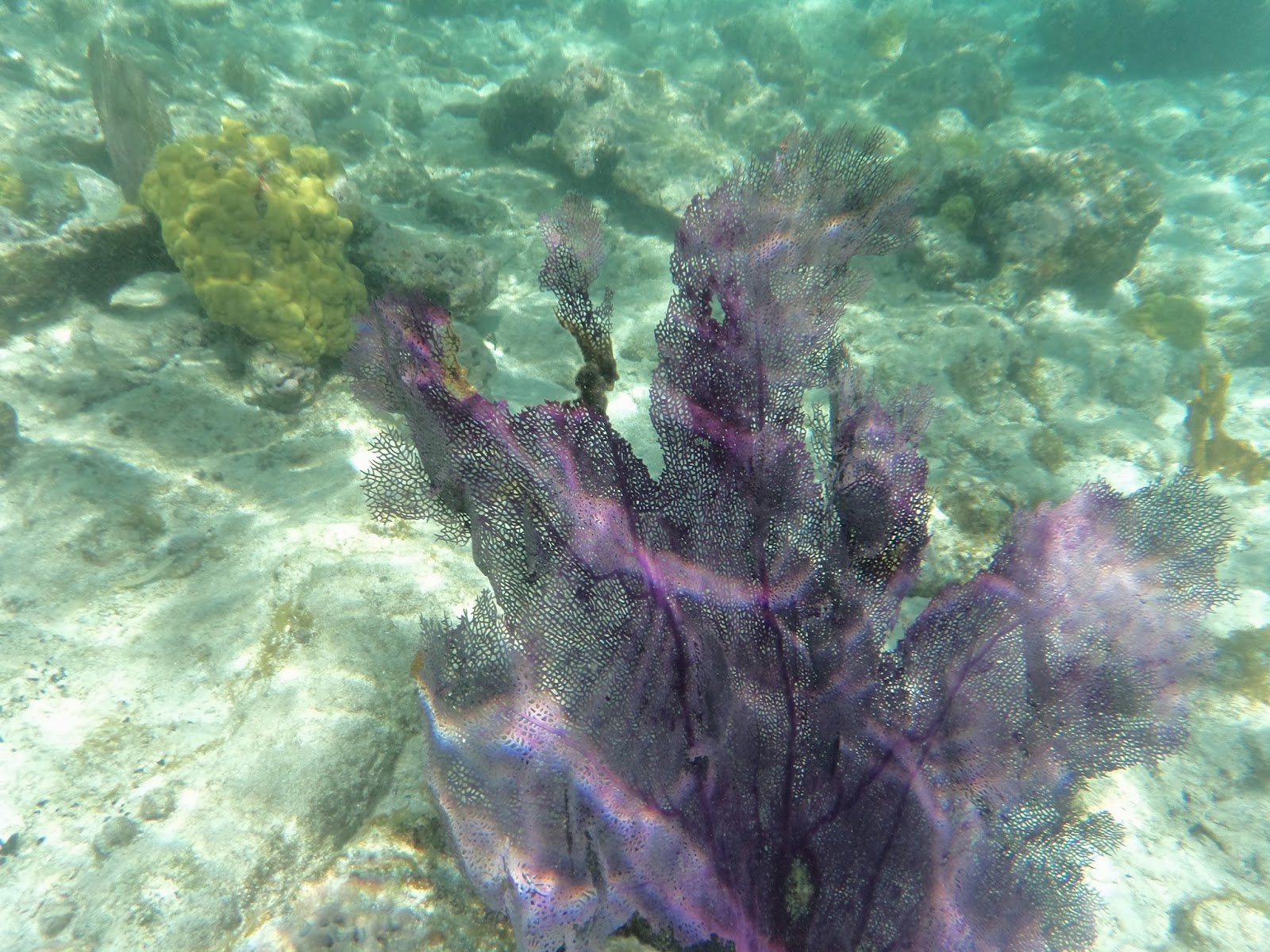 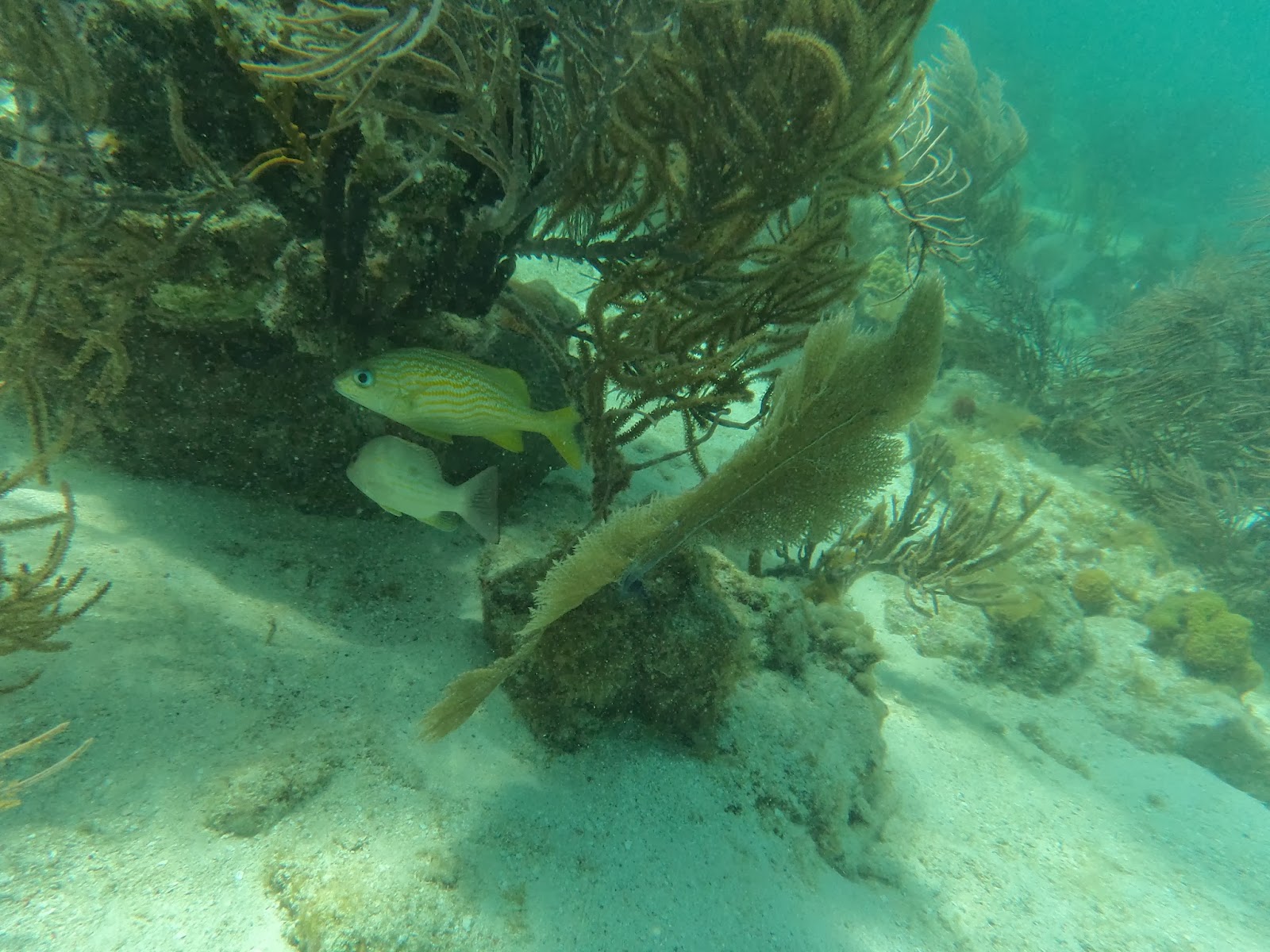 The weekend was all about having fun on tropical beaches. We sailed over to Jost Van Dyke in the British Virgin Islands and checked in through customs. Jost Van Dyke is home to several famous beach bars including Foxy’s and the Soggy Dollar Bar. Dana and I visited these bars back on our honeymoon, and Hanna did the same on a charter she did with Chris several years ago. We felt triumphant returning on our own sailboat, picking up a mooring amidst all the charter boats! We swam in to shore and drank painkillers on the white sand beach surrounded by palm trees at the Soggy Dollar Bar, just like Dana and I did back in 2008.

We were a happy trio and within no time made friends with other boaters including a group on a large chartered catamaran they were sailing sans captain (called bareboat chartering) who invited us over their boat for drinks later in the evening. In addition to drinks, they gave us some good recommendations about other nice spots to check out in the BVIs.

The next morning after an invigorating swim, we left for Sandy Cay, where we ran into the group again having drinks while lounging on floaty mats. Sandy Cay is a picture perfect little tropical island with a hike providing scenic vistas of the open Atlantic ocean and surrounding islands. We again thanked the group for their recommendation and headed on to a spot where they promised we could snorkel with sea turtles. We failed to find any turtles at that spot, but had a nice snorkel nonetheless.

After our weekend of leisure, we sailed across to the larger island of Tortola and spent the night at Cane Garden Bay. Chris, Hanna’s boyfriend, was living on Tortola for a brief period back when Dana and I were married and we passed through Cane Garden Bay a few days before our wedding. Apparently, Jimmy Buffet has a song, “Tire swing,” about Cane Garden Bay. When spending a night at a beach Jimmy Buffet mentioned, you know you’re in the Caribbean! Our mooring was calm and serene and we headed into the Elm Beach Bar to listen to a local band after a delicious dinner on board prepared by Dana.

Some time overnight, the direction of the swell shifted and our calm anchorage became very uncomfortable and our mooring ball repeatedly banged into the bow of the boat. We did not get very good sleep and were happy to go ashore to do laundry first thing in the morning. I went for a long run to a beach where Chris, Erik, and I surfed back in 2008. Although I have my surfboards along, the surf beach was way too far for walking with a board and had no tenable anchorage nearby. I settled for standing for a few minutes next to Bomba Shack (a beach bar constructed of driftwood famous for full moon parties), and watched some of the surfers.

From Cane Garden Bay we sailed around Tortola to Road Town, the main city on the island. We’re here now at a marina getting a tune up for our trusty diesel engine and will probably head over to Norman’s Island tonight or tomorrow. Back in a marina, we can charge all our electronics, get on the Internet, and refill our water: all very necessary chores.

So how has it been with our extra crew member, Hanna? Fantastic! Although she learned quickly that she does not like rolly anchorages, and is having a bit of trouble disconnecting from the digital world, she is adjusting to boat life rapidly. She is eager to learn how everything works on Eventyr and to help with all the chores aboard. Dana and I are happy to have an extra set of hands and Hanna provides a spark of excitement we were lacking. Everyone we meet reminds me I’m a lucky man to be travelling with two beautiful crewmates.

Another positive since Hanna joined the adventure is the sailing. As you may recall, we’ve been motor sailing into wind and waves the past several months. Not only does this use gallon upon gallon of diesel, but it’s also loud and smelly. Since arriving in the Virgin Islands, the sailing has been fantastic. We’ve had idyllic short sails of eight miles or less lounging on a comfortable beam reach with the engine completely silent. It’s like a breath of fresh air! I’m sure Eventyr is happy to be performing as a sailboat again. 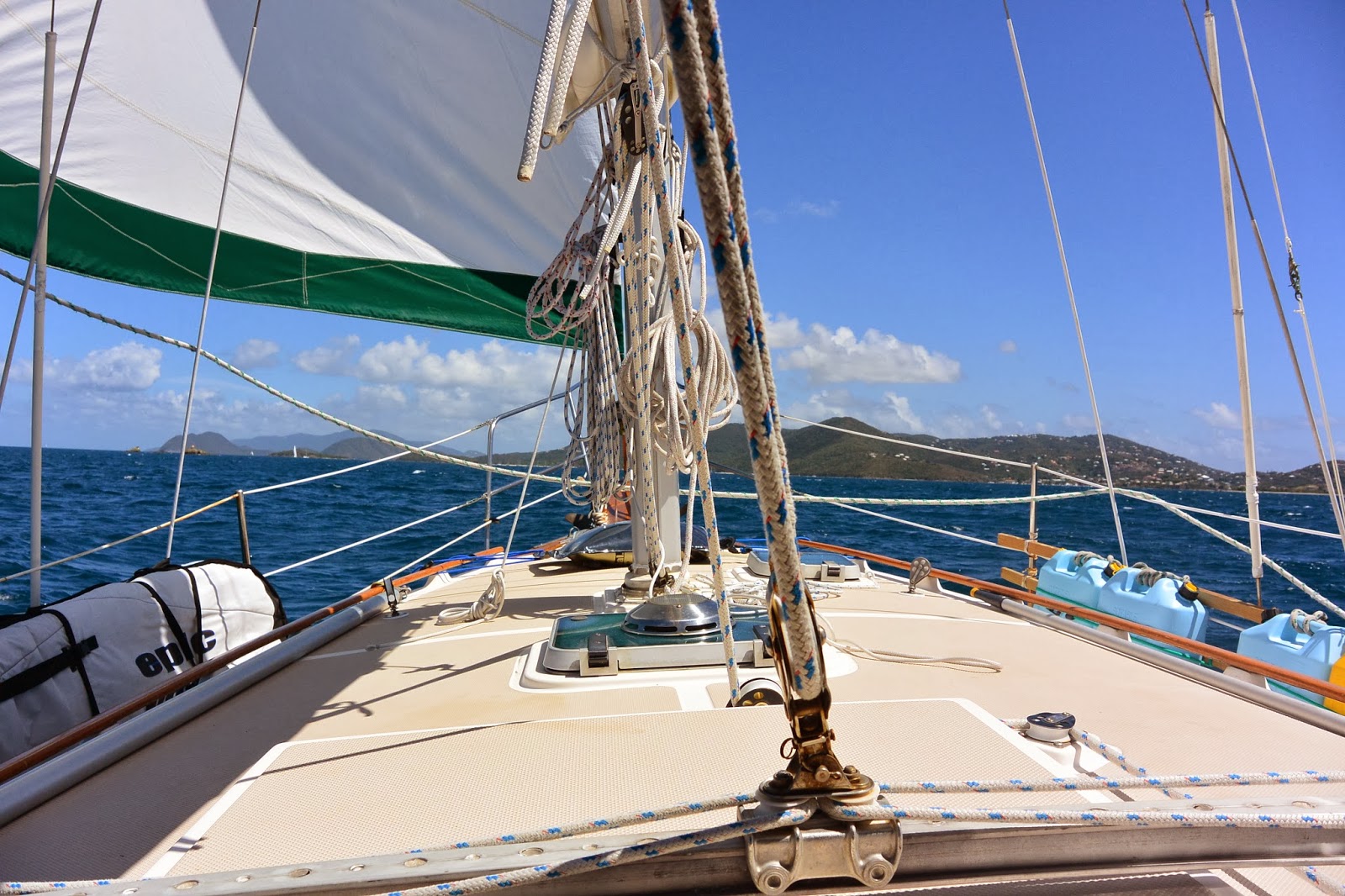 I turn 38 today as the adventure winds on. Dana is making me birthday beer bread, upon my request. I’m not sure what the evening will hold. My friend Greg told me to have a beer for him, and I think I shall. We bought a six pack of Golden Monkey at Walmart (of all places) in Puerto Rico, and I think we have one or two left. We may head over to Willy T’s, a reproduction tall ship turned bar, permamently anchored at Norman’s Island a few miles away. To all you suffering through yet another blizzard, I feel for you ;-)
Posted by Unknown at 6:55 AM