Saba, an island that touches the clouds

Anguilla came and went in a blur. We were there one full day, and during that day we rented a car, hung out at beautiful Shoal Bay beach, provisioned food, water and fuel, and had sunset drinks at Elvis’s Beach Bar. We packed a lot in, but felt like it was a very productive day. 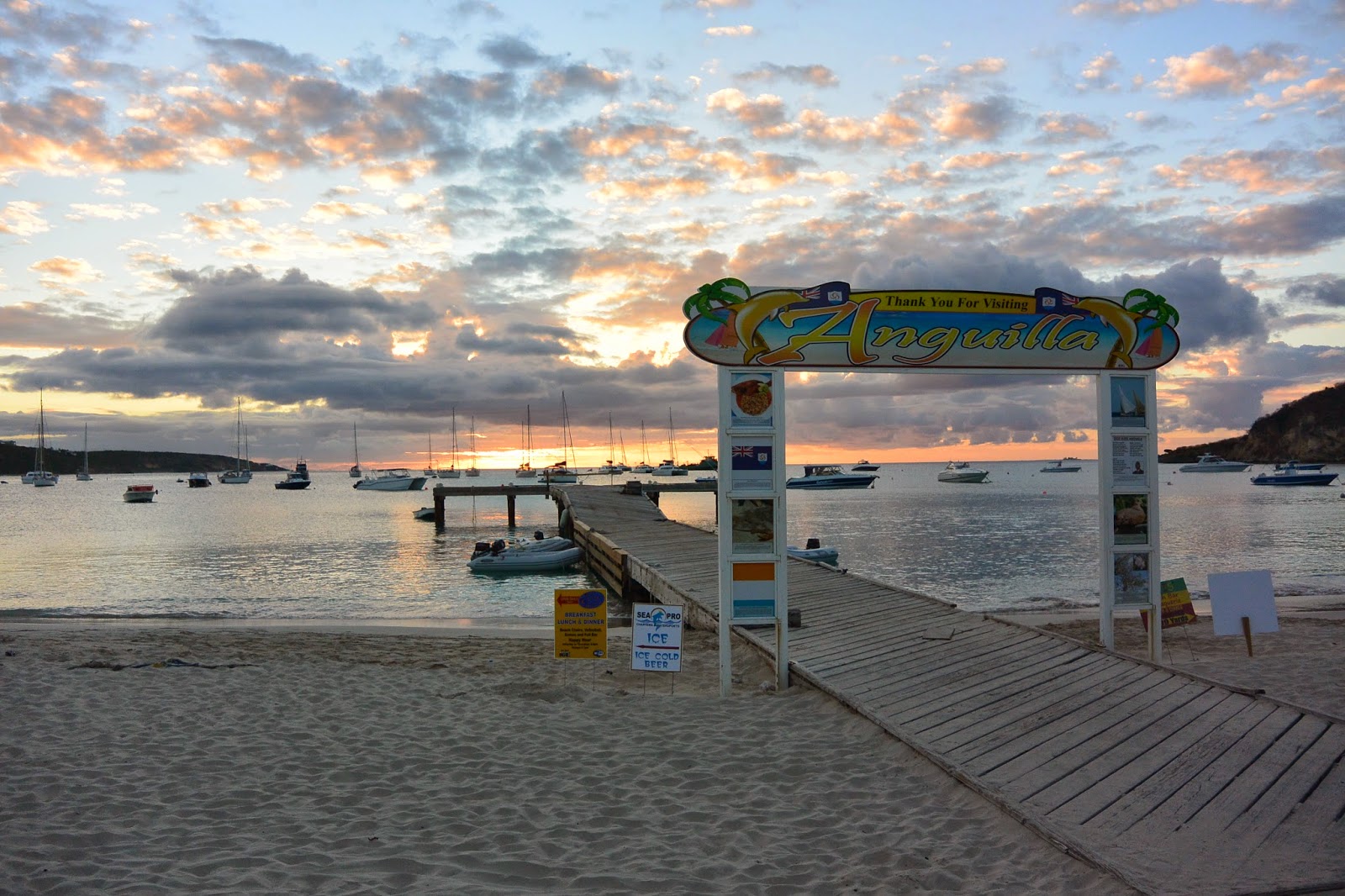 The next morning we raised anchor just after first light to head for Saba. Saba is a small mountainous island about 40 miles south of our anchorage in Anguilla. We heard people sing its praises ever since the Dominican Republic, so we didn’t want to miss it. What we found was just what we were promised: Lush green rainforests ascending steep slopes, quaint little colorful homes perched precariously over 1000 foot cliffs, and friendly people. We also heard the scuba diving is amazing, but that’s not our bag.

We had a fun sail over in light winds on the beam. We cruised along at six knots under full sail for the last ten miles of the trip after the winds picked up a bit. Upon arrival, we had some trouble finding the right mooring (after getting kicked off of one by a local dive operation), but finally found one about a mile-and-a-half from the main dock. Saba is “steep to,” meaning the ocean is hundreds of feet deep until very close to shore. Because of the depth, the Saba Marine Park installed moorings cruising sailboats can use. We had a long dinghy ride in the open ocean each time we went to shore. Good thing it worked (most of the time)!

Upon arrival we all went to shore to check in through customs and have a drink. To our surprise, there on the dock was Ryan. We first met Ryan and Sam, on Elysium, in Turks and Caicos, and then spent a good deal of time with them back in Luperon. We even tried to sail with them from Luperon to Samana the day after the Superbowl but had to divert early. We hadn’t seen them since. Ryan just climbed to the top of Mount Scenery, the highest point on Saba and highly recommended the hike. We said goodbye to Ryan and Sam, who are heading further south. Maybe we’ll run into them again in Saint Lucia or somewhere.

The next morning Hanna, Dana and I were up early to tackle Mount Scenery. We taxied to the trailhead and took off. The mountain is nearly 3000 feet tall and the Sabans installed over 1000 stone steps, by hand, to aid in your climb to the top. The jungle was dense and bright green with ferns, banana trees and elephant leaves. We struggled our way to the tippity top, climbing one last rope to get to the summit. We were in the clouds, but occasionally the wind would whip through giving us a clear view of the vast ocean and small settlements lining the valleys of the island. We took in the scenery and started our steep descent back down. 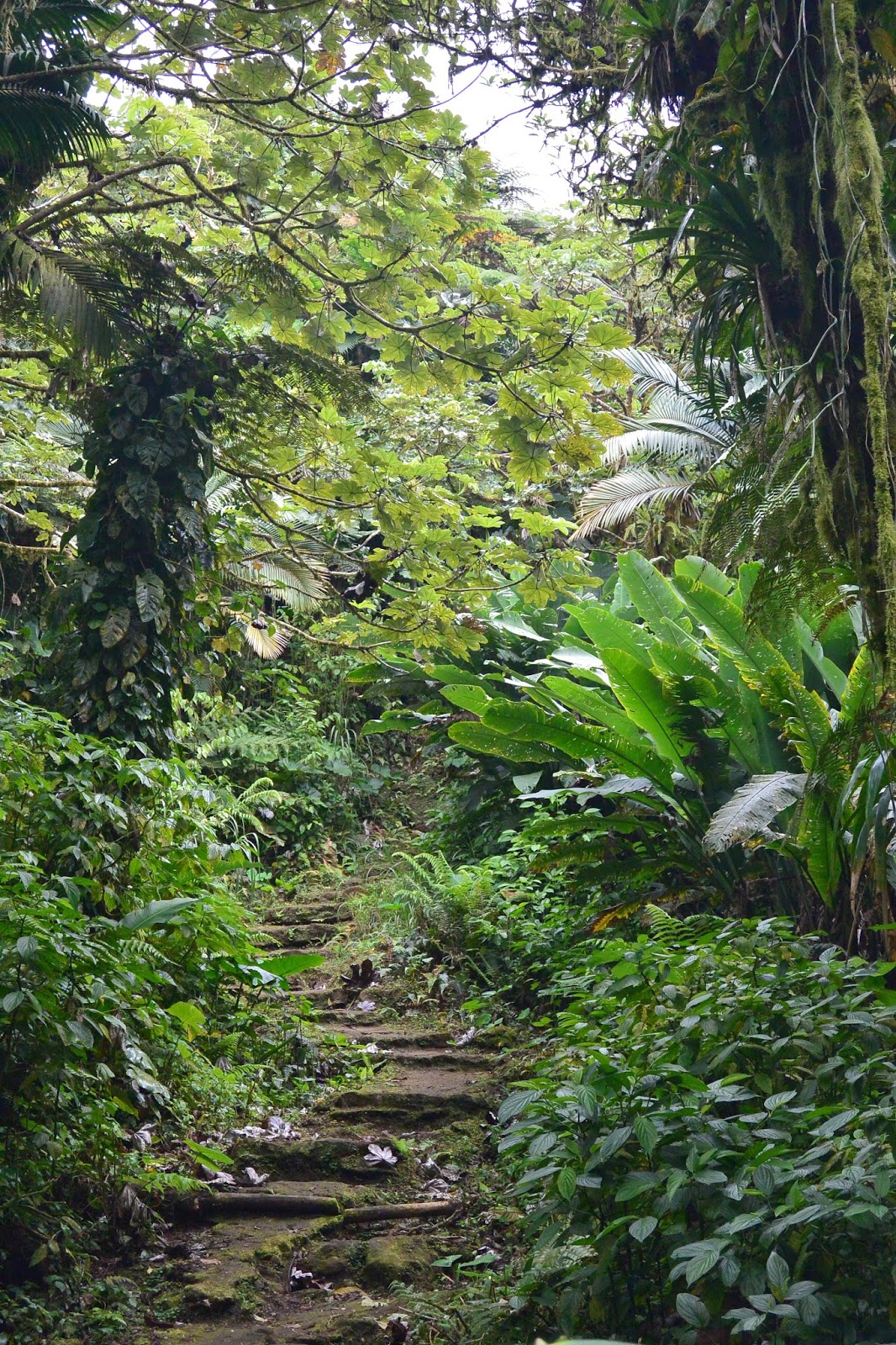 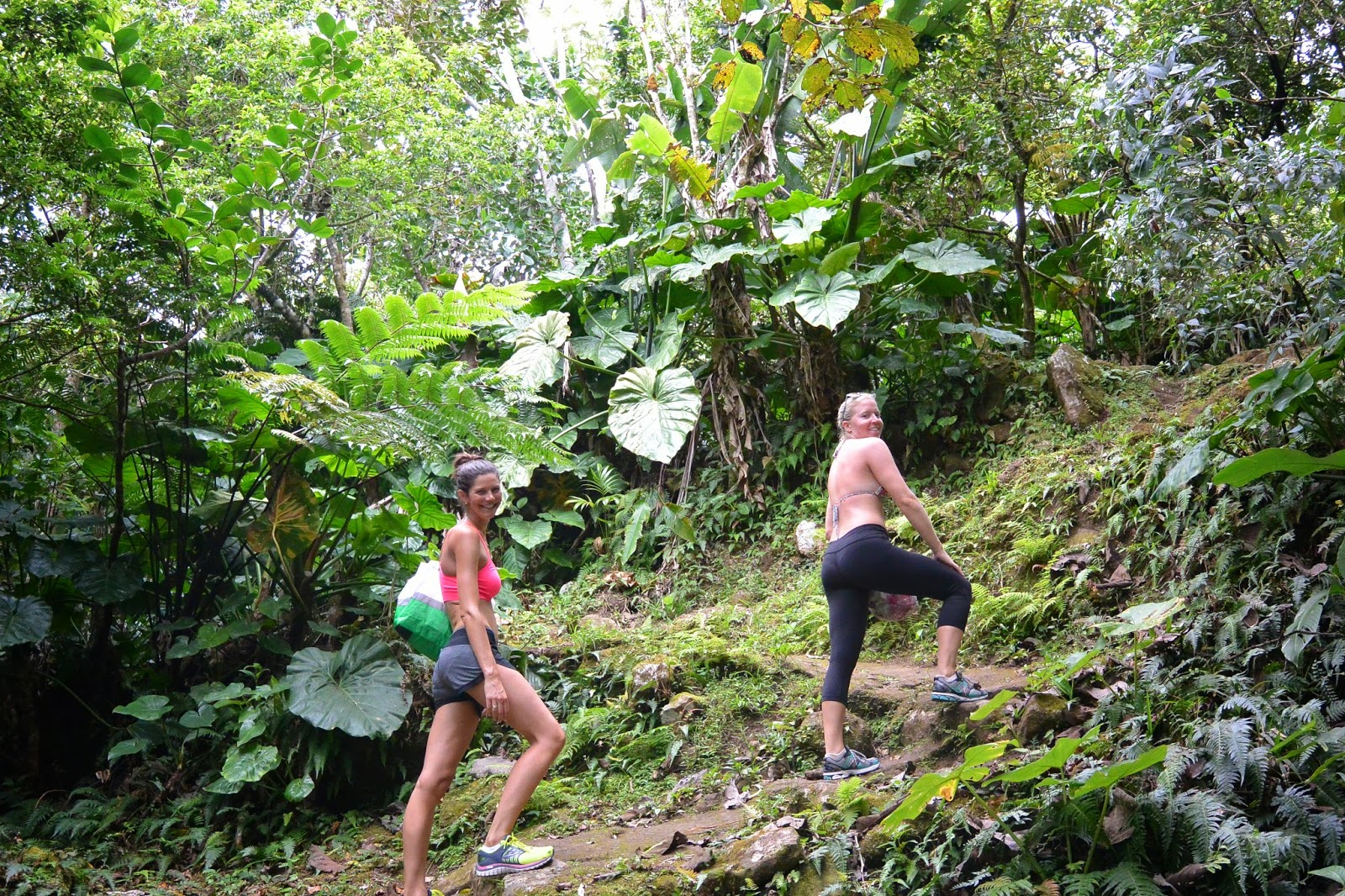 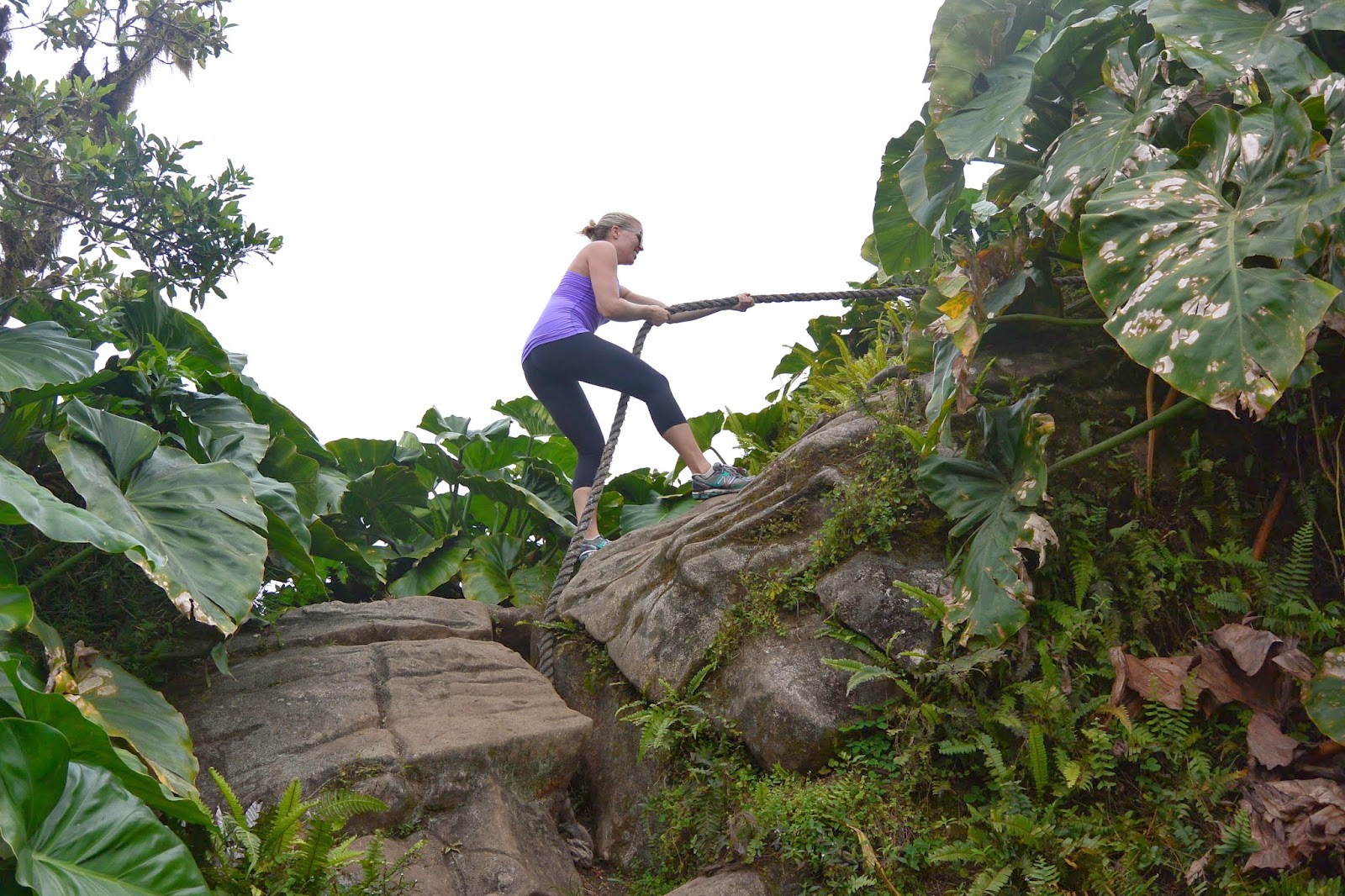 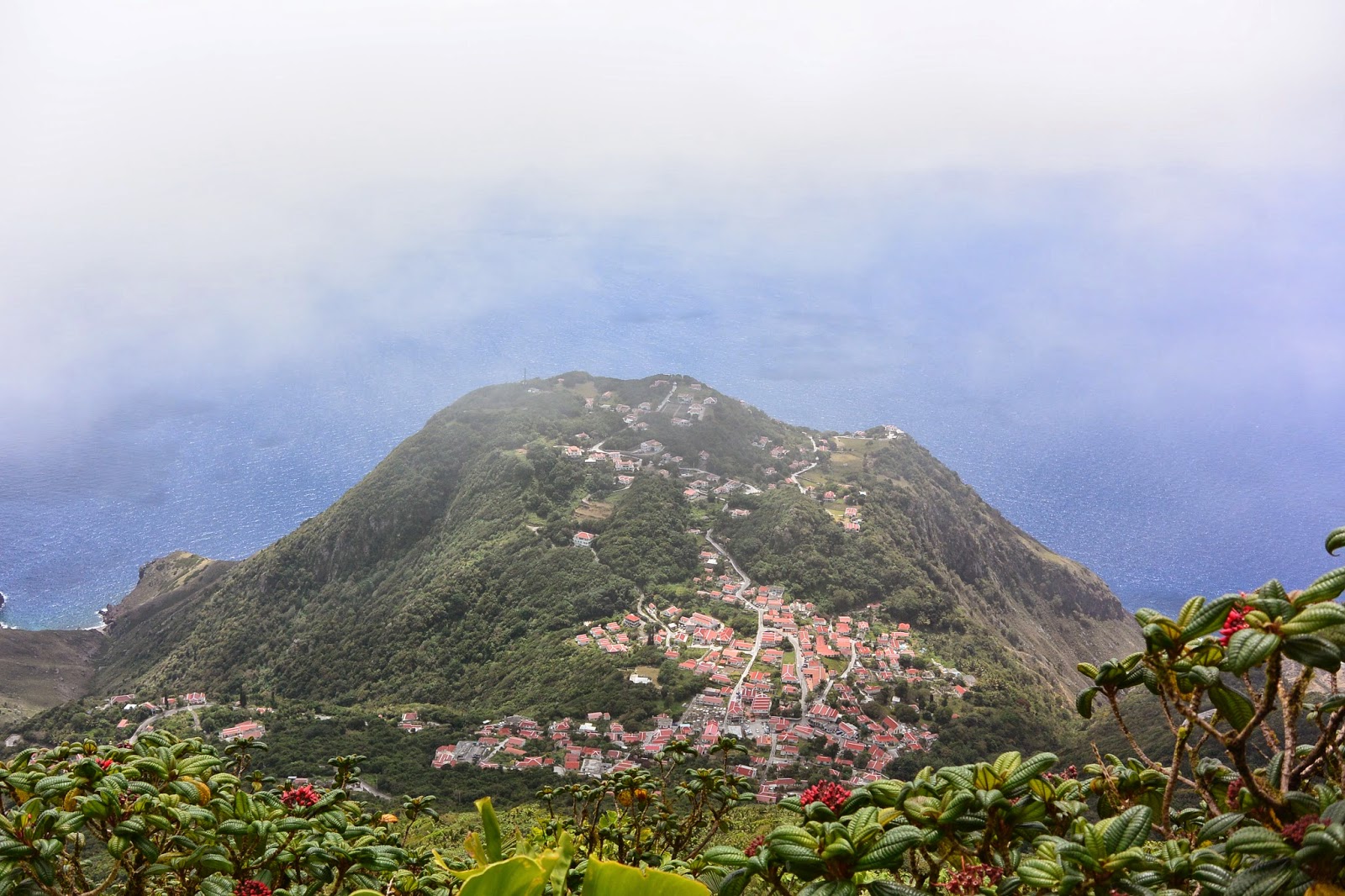 Near the trailhead of mount scenery we stopped at the absolutely charming Eco Lodge. We rested and had a cocktail to get our energy back. We continued into the town of Windwardside, where we had lunch and got another taxi to give us a tour of the island. We drove the steep and crazy roads and stopped at the seemingly impossibly perched airport, built on the only flat bit of ground on the island. 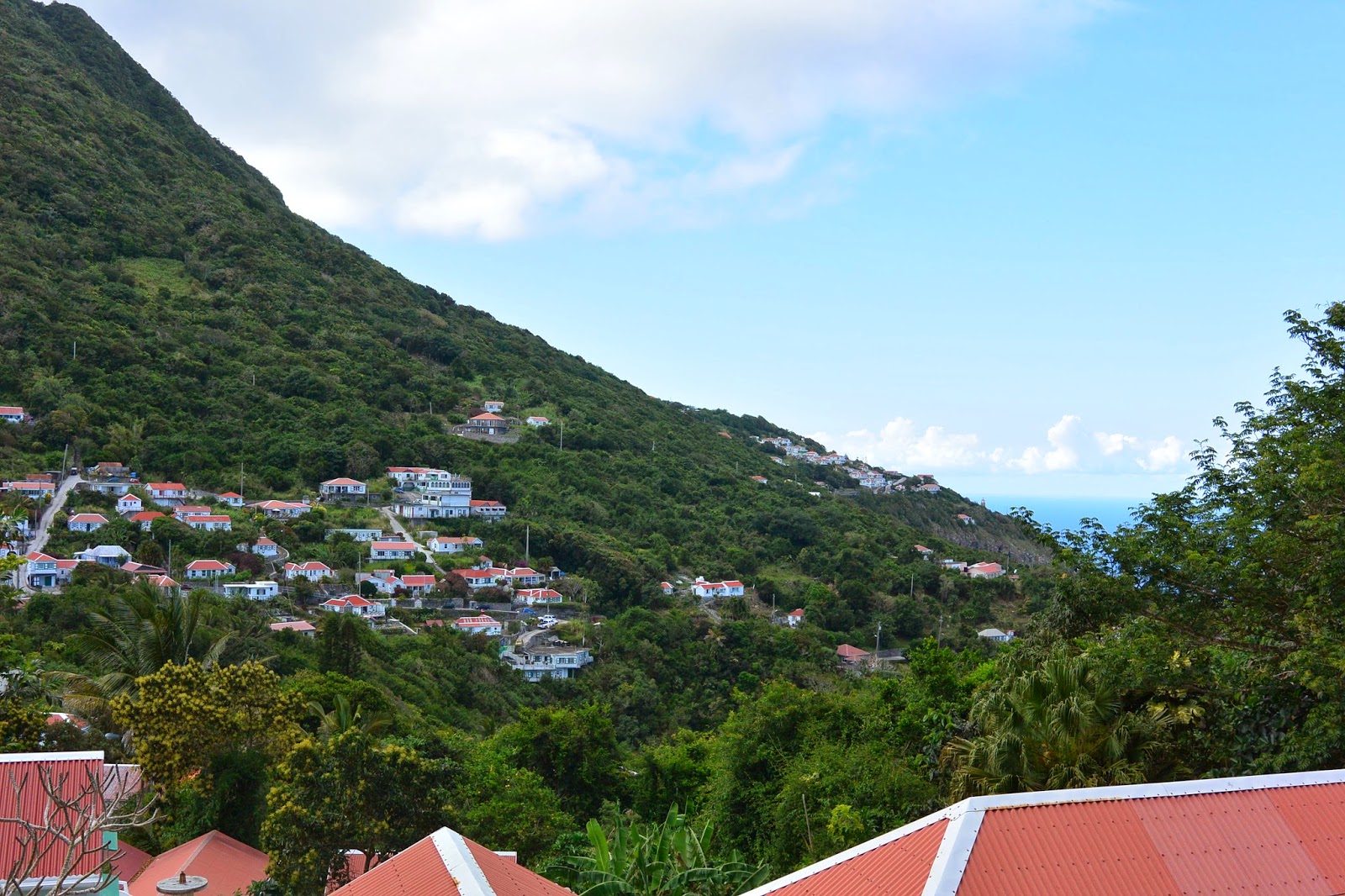 We ended our tour at Bistro del Mare at Shearwater Resort. This small resort has a bar, pool and terrace overlooking a 2000 foot precipice. We spoke for a while with Paul, the owner who approved of our adventure. He is living an adventure of his own, as an American who decided to leave it all behind and take the risk on a business on a small Caribbean island. It sounds like he wouldn’t take it back for a minute! Saba might be one of our favorite spots on the adventure yet.

From Saba we headed due north to St. Maarten (next to Anguilla). Why north? Well, we got exciting news back in Anguilla earlier in the week that Hanna’s boyfriend and our good friend and co-creator of the adventure idea in the first place, Chris, was flying into St. Maarten. Hanna has been buzzing with excitement since. Boyle will be arriving within the hour. Although super busy with Solo Shot, he was able to take a few days to join us on the adventure. Boyle and Hanna travelled with Dana and I on Eventyr for a day back in Florida motoring from Boca Raton to Ft. Lauderdale in the ICW early in our trip. This, however, is the “real” adventure. We’re now in the leeward islands of the Caribbean, island hopping, going from one adventure to the next!

In an interesting twist of fate, anchored just outside the marina in French St. Maarten at which I’m currently typing this blog, is the sailing vessel Emily Morgan. Chris and I chartered the Emily Morgan in the Mediterranean more than ten years ago as our first foray into the world of live-aboard sailing. Dana even joined us for a week, only a few months into our dating relationship. The Emily Morgan looks as beautiful here in the Caribbean as she did back in the Med. It seems like a good sign for Boyle’s stay, similar to the coincidence of Dana and I spotting our honeymoon charter boat at a random marina while heading down the ICW earlier in the trip. I predict some fun sailing, fishing, and snorkeling over the next few days.