Swam with a wild dolphin “Pierre” in Iles des Saintes!

Yesterday was one of our best days yet on the adventure. After a nice morning run and breakfast of baguettes and chocolate croissants, we spotted a dolphin off our starboard rail. We’re anchored off the beautiful French hamlet of Bourg in Iles des Saintes. Dana and Hanna had their flippers and snorkels on in a flash and were in the water. I expected the dolphin to leave, but instead he came close to the duo and swam with them.

Upon seeing the dolphin’s desire to play, I hopped in as well. It was an amazing experience. He let us get very close and would swim right next to us in a leisurely fashion before diving down about 15 feet and just hanging out. He would then come back up to us and swim around in circles looking at us. At one point, he curled up into a “C” shape under water and just looked at Dana. He seemed to actually enjoy hanging out with us and was as intrigued by us as we were of him.


Other boats in the anchorage noticed the fun we were having and a few other boaters jumped in as well. A couple on a sailboat from Sweden with their two young daughters joined the mix first. The dolphin appeared to especially like the children and began to put on a show. He would swim very close, clicking in his high pitch excited tone, and then roll onto his back, showing his belly. It was unlike anything we’ve ever experienced.

We named the dolphin “Pierre,” because we’re in French waters. Almost no one in town speaks English, and I’m sure Pierre didn’t understand what we were saying either. We had some sort of connection either way. He seemed to be staring right into our eyes as he swam slowly around us, with his mouth in a constant smile. We spent almost 2 hours swimming together!

Isles des Saintes is another one of those fantastic places that tops our list of favorites on the adventure. The water is crystal clear, the weather is perfect and the beaches are relaxing. The town is incredibly photogenic, with colorful houses and an obvious European influence. There are very few U.S. flagged boats here, and the ferry typically brings French-speaking tourists. We’re far from the American spring break atmosphere of the Virgin Islands. 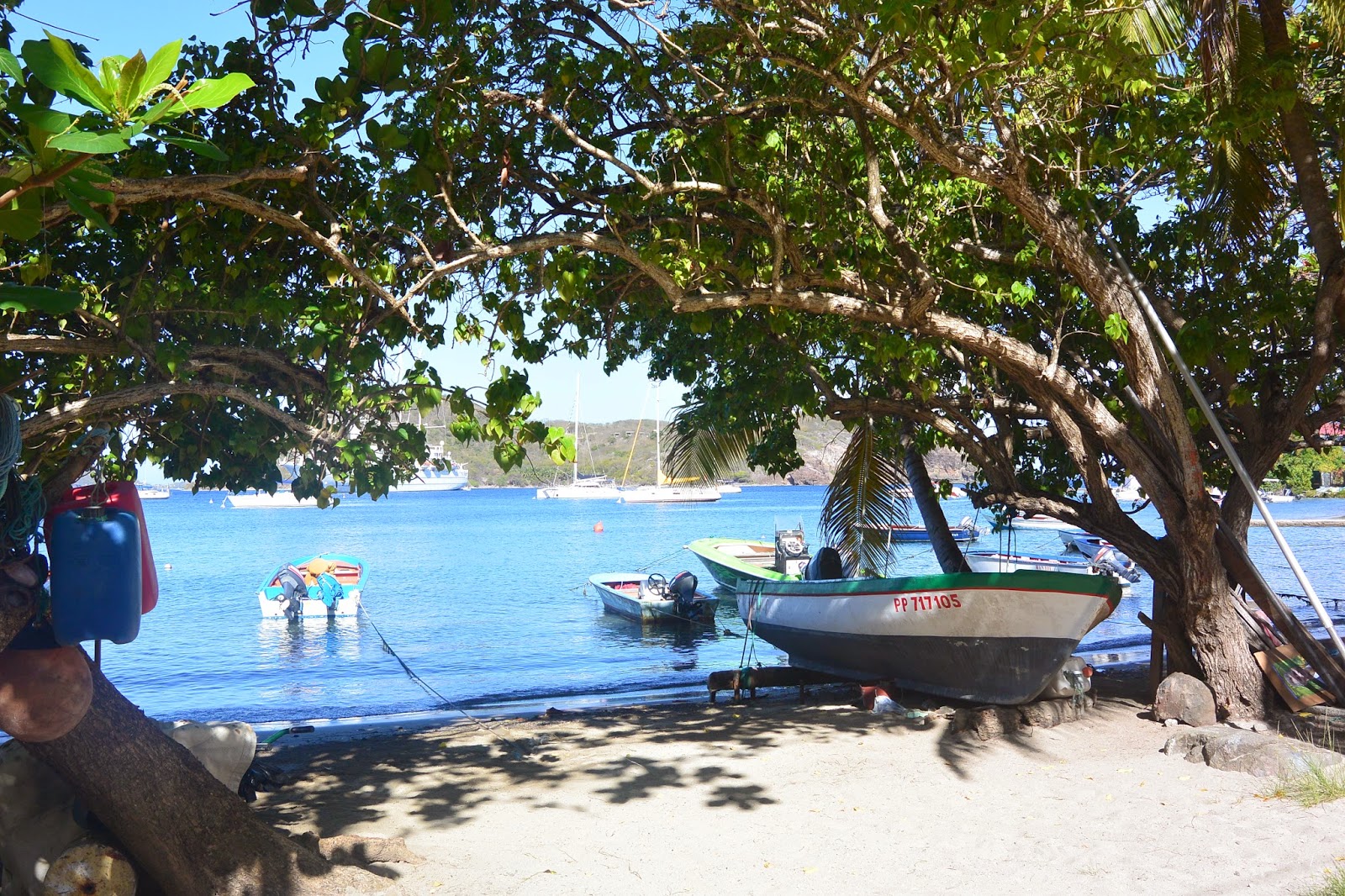 Today we spent some time at Pompierre beach, a tree lined stretch of sand protected from the open ocean by a small island. We lounged on the beach for a couple hours waiting for the one fuel dock in town to open, so we could fill up on diesel. While relaxing on my towel in the sand, I opened up the salami and cheese on baguette I packed for lunch. Out of nowhere, a goat was on my towel with me looking for a handout. I thought it was funny at first, but the goat was very persistent. I had to hold him back or else he would have stolen my whole lunch! The other French beach goers found the whole event very amusing.

It will be a shame to leave, but we’re heading south to Dominica tomorrow. Dominica is known for rainforest covered mountains, waterfalls, and jungle rivers. We can’t wait! However, in the meanwhile, our outboard stopped working again. I just had to row half a mile into town, which caused us to miss customs. I will have to row back tomorrow morning to clear out of customs. Hopefully Dana and I can take apart the carburetor (again) to fix the problem. We’ll see.
Posted by Unknown at 3:16 PM