Before this trip began, Dana and I looked at the charts of the Caribbean and determined that no two islands we would like to visit are more than 80 miles away from one another. That meant we would never have to sail overnight. Maybe start a little before sunrise to make it by dusk, but no sailing out into the darkness of night as sunset came and went.

Well, that all changed Tuesday night. Since we’re trying to get to the Turks and Caicos Islands by the 15th when our friends Patrick and Shanley fly in, we have to make good time when we can.  Also, we can only sail south and east (the directions we will be travelling throughout the entire Caribbean) when a weather window opens, because the prevailing wind direction is directly from the southeast (A.K.A., trade winds). So, a weather window opened on Tuesday and it was good enough for us to travel close to 150 miles from Rum Cay to Mayaguana, the furthest south island in the Bahamas, without having to beat directly into a 20 knot headwind.

Our overnight sail had its ups and downs. We left Rum Cay at 5 am and motor sailed all day, because the wind was too light to sail without using a little engine power to speed us along. The sun dropped over the horizon and we kept on going right out into the open Atlantic with no land in sight. We took two hours shifts with one person at the helm and the other sleeping. The seas were calmer than our previous open ocean crossings, but not serene by any stretch of the imagination.  During the dark night, we delighted to a sky full of stars and phosphorescent creatures surfacing in the wake of our boat. When we looked down into the wake, hundreds of fireflies appeared in a sea of black. The sun finally rose as we were approaching land and we anchored in beautiful Abraham’s Bay before noon.

That’s not to say we didn’t have some excitement during this crossing. Some time after dark while sleeping down below, I was startled awake by the engine making a loud whining sound as if the propeller was spinning though sand. I ran up into the cockpit and Dana was as shocked as me. “I don’t know what’s going on, but we’re losing power!” she yelled. The engine didn’t die so we put it in neutral. We were both pretty freaked out. There wasn’t enough wind to sail to our destination and we were 30 miles or so from the nearest island (which happened to be uninhabited with no good anchorages). I was worried something might be caught on our propeller but I was not about to dive in under way, at night, in the middle of the ocean. We tentatively put the engine back in gear and it seemed to be working ok. We motored the rest of the way at lower RPMs and I checked the propeller once we got to our anchorage. I think we must have run over a patch of sea grass or something, which got chopped away by the prop, because nothing was stuck in there when I looked. Whatever we ran over, it was a scary few minutes.

I woke again during a later sleeping shift at two in the morning to Dana squawking excitedly. I ran into the cockpit and she was smiling and laughing pointing at the starboard cockpit bench. There, on one of our Crazy Creek camping chairs was a flying fish. She explained that it flew right into the cockpit. We see flying fish all the time, and I was wondering if one would ever fly into the boat. Well, there was my answer. I saw The Life of Pi before we left, and there’s a similar scene in that movie, only with hundreds of flying fish landing in the boat instead of just one. Flying fish make great bait, but Dana would hear nothing of it. We threw the little guy back over board and went on with our sail. 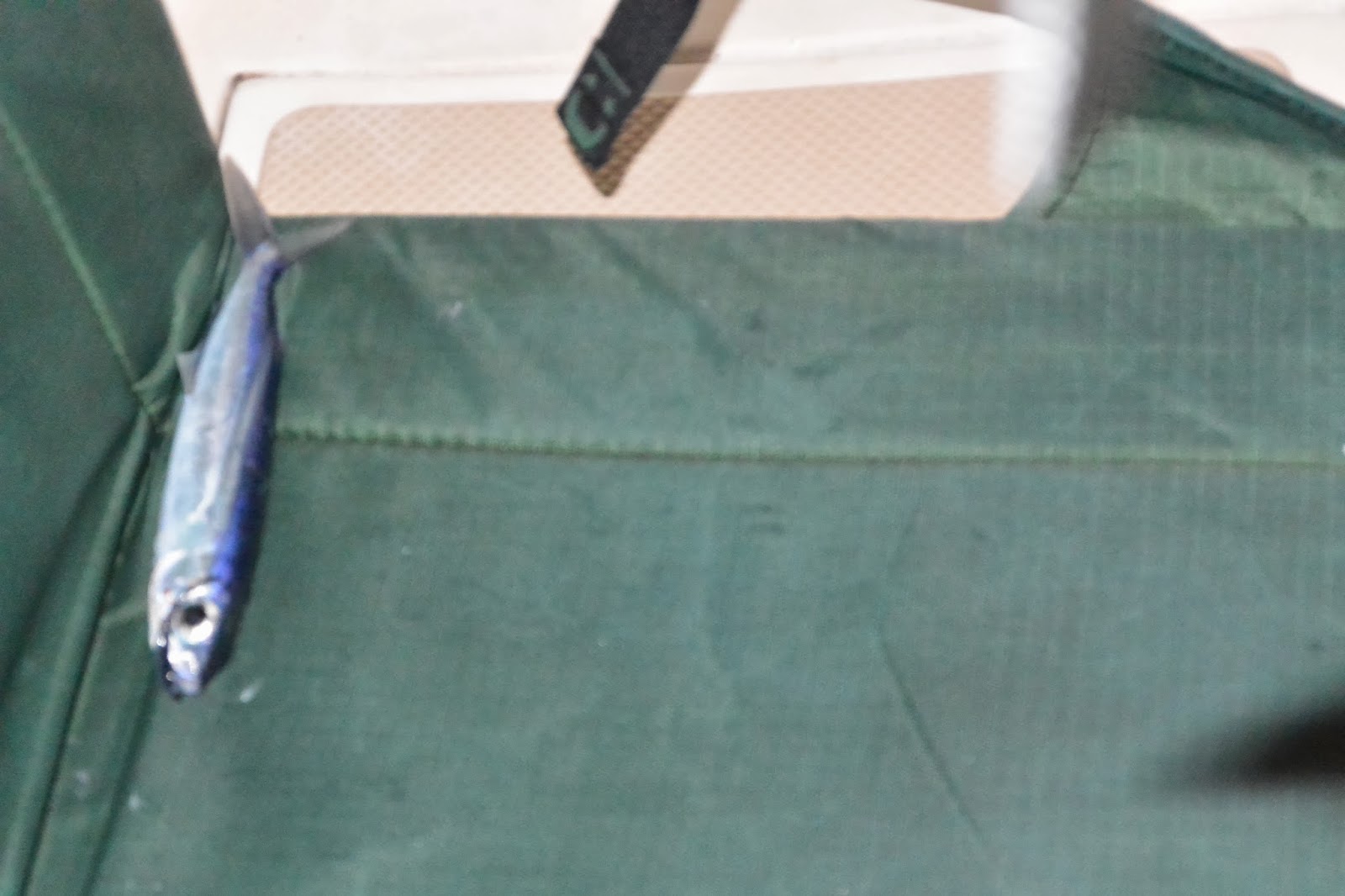 The excitement of our 29-hour sail was not the only thing we’ve been up to since our last post in Georgetown. We made it out of picture perfect “chicken harbor” on January 3rd after a fun several days. In addition to Junkanoo, we were there for New Years Eve. We attended a New Years Eve party on the beach thrown by cruising sailors in a thatched roof tiki hut they built. Then, Dana and I dinghied into town for a nice dinner and new years festivities. We met a couple guys, Markus and Werner, from Switzerland who just arrived from a transatlantic crossing the day before. Their friend Judy flew in to join them, and the five of us partied the night away. By the way, who knew expired flares could be so fun? The next night, they had us aboard their large, steel hull sailboat for fondue. 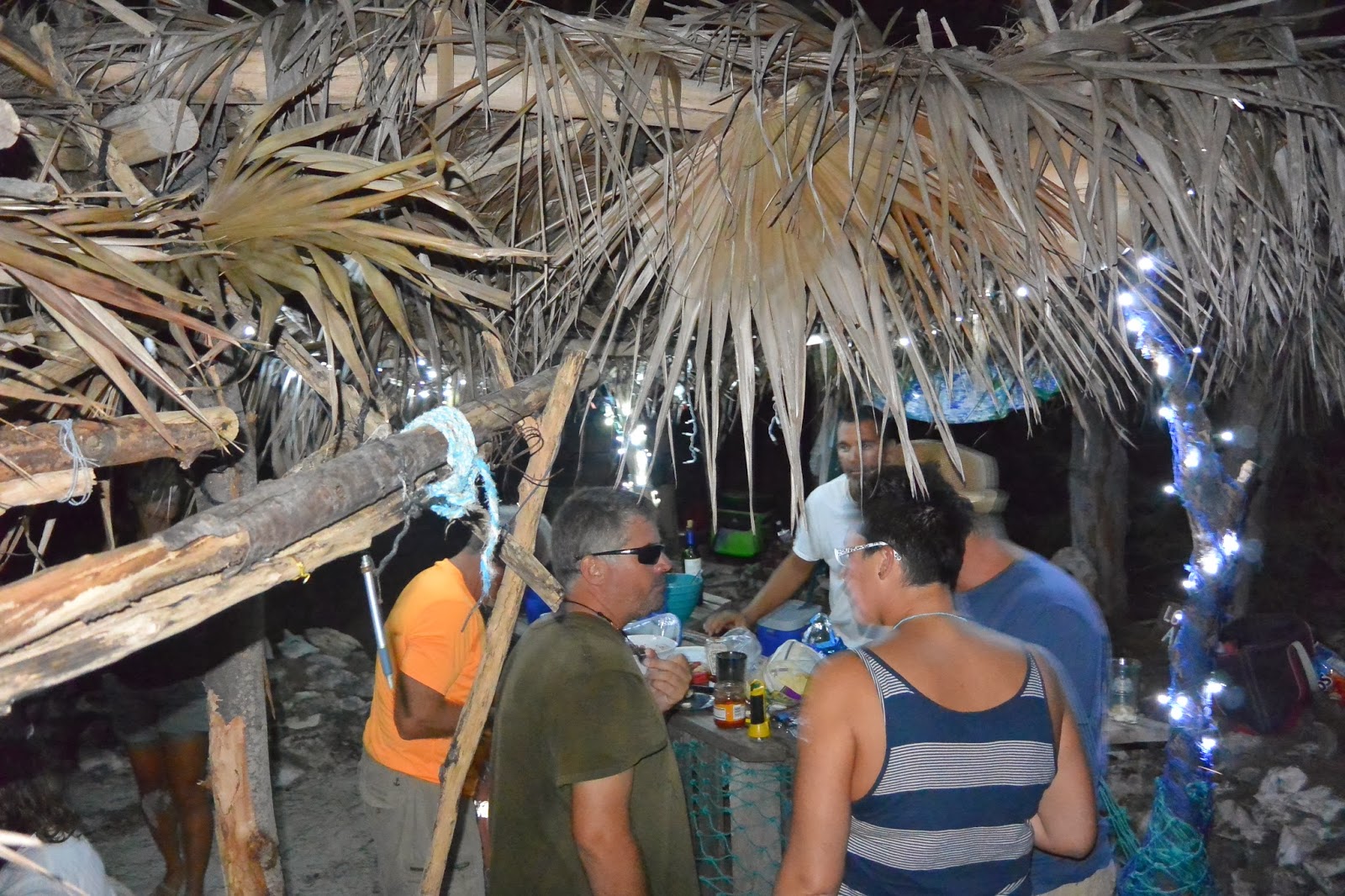 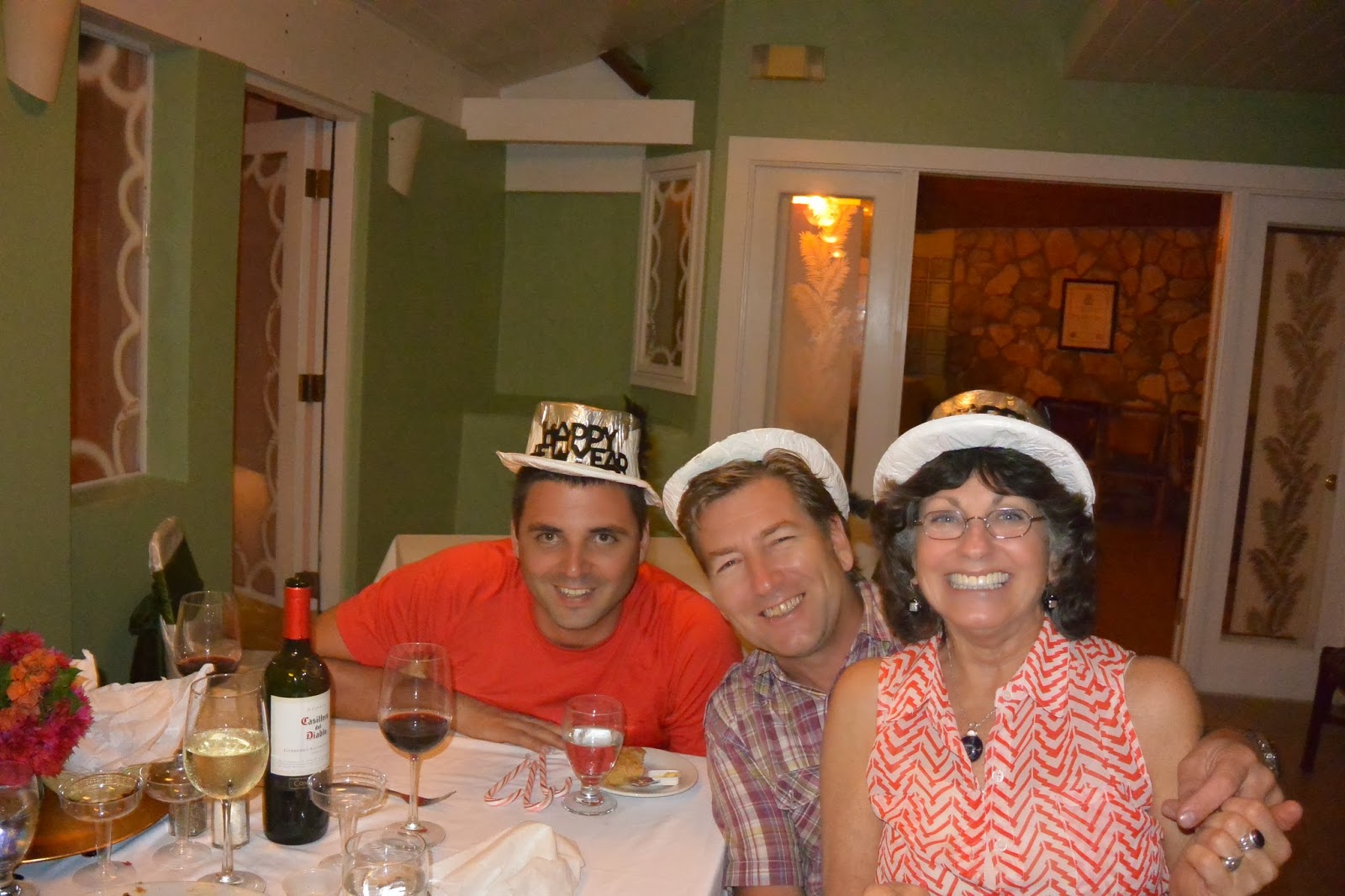 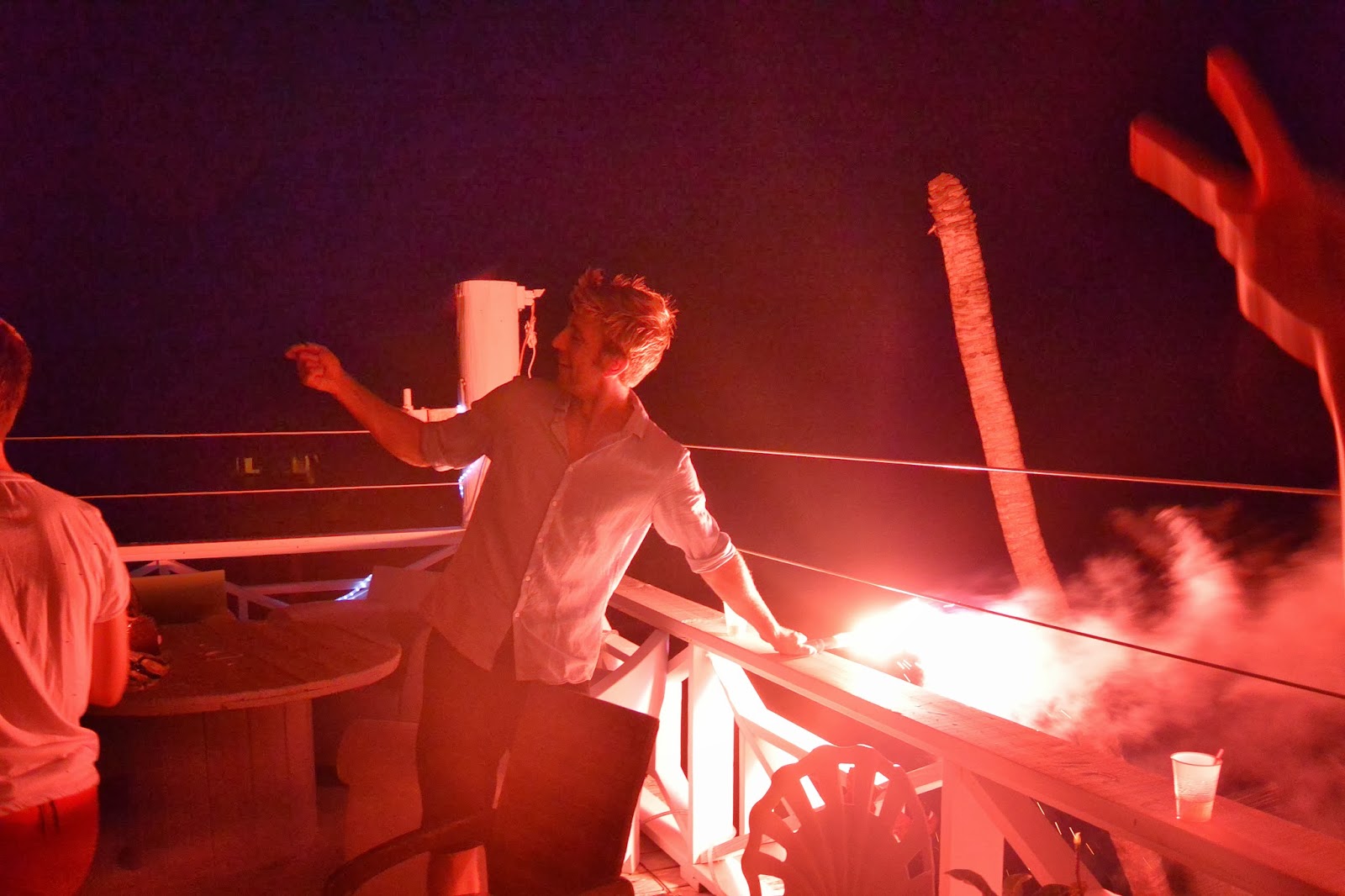 Dana and I hiked, swam, and re-provisioned in Georgetown, but had to be on our way with the next weather window.

We motor sailed in light winds the 60 miles to Rum Cay on the 3rd. Unlike Georgetown, where we were welcomed by dolphins, a fish on our line, and several calm anchorages, Rum Cay had a different initial feel. Coming into the “marina,” we had to visually navigate around dangerous coral heads because the channel markers had all washed away. Upon tying up to the rickety dock, we looked down to see six or seven large sharks circling the boat. Two other cruising sailboats also arrived from Georgetown less than an hour before and helped us with our dock lines. They assured us they were only nurse sharks, but the locals later told us they were bull and lemon sharks attracted to the docks because fishermen clean their fish there. I think I remember from Shark Week, on the Discovery Channel, that bull sharks are responsible for more attacks on humans than any other sharks. The missing boards in the dock made tying up the lines that much more menacing, especially when you looked down between the missing boards to see a six foot shark directly below you! I put marina in quotes because this “marina” has not been open for well over a year, although cruisers are still allowed to tie up to the dock if they’re prepared to deal with adversity. In addition to the unmaintained docks, no water or electricity are available and it’s a mile walk into the small settlement. 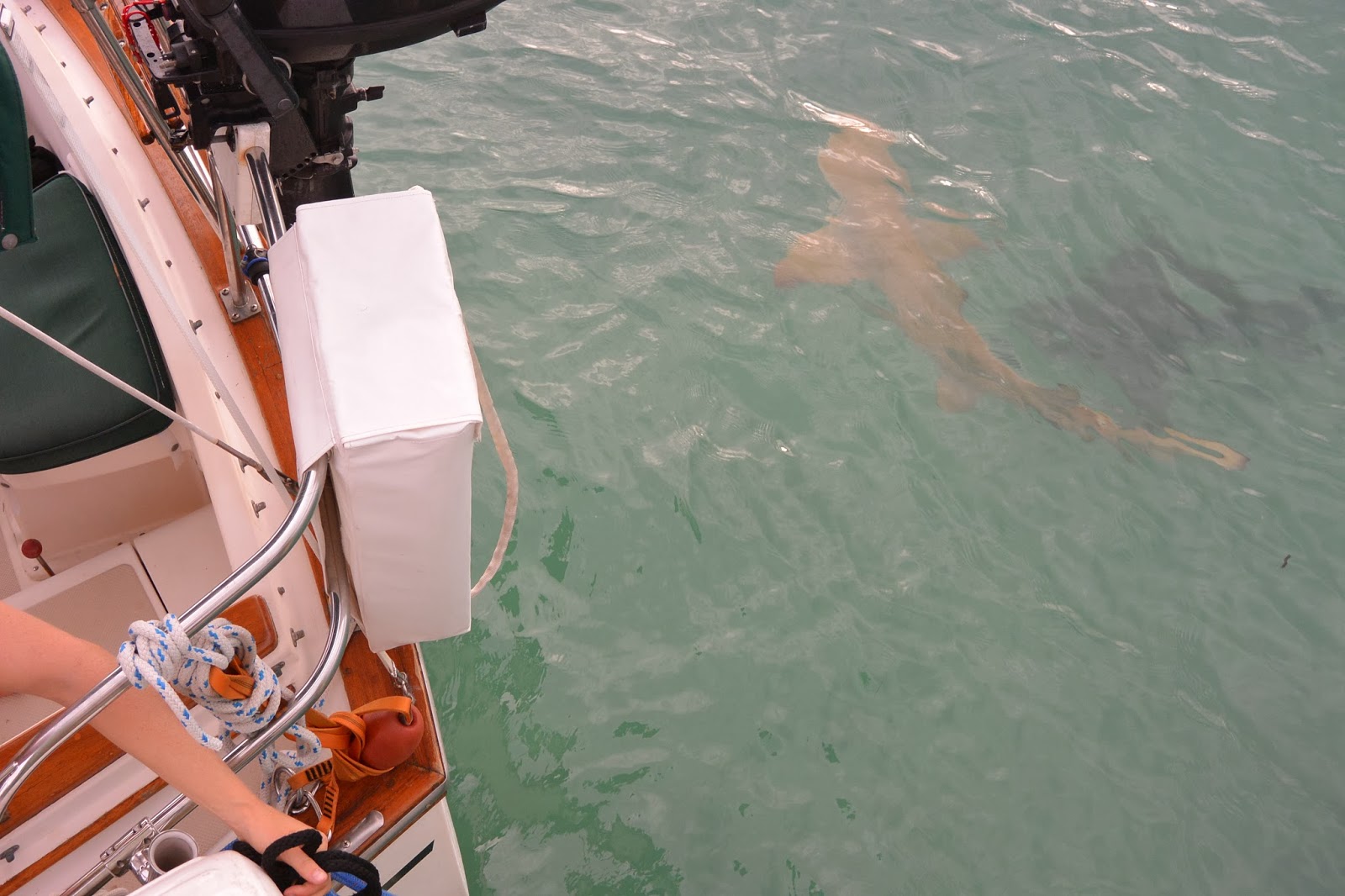 Rum Cay itself is an interesting little island. Formerly thriving with a large salt production operation, the operation is now shut down and only about 30 people live on the island. Tourism from cruising sailors was important, but two hurricanes in a row slammed the island and destroyed the marina. The friendly owner, Robbie, has not been able to reopen despite valiant attempts. The whole situation is kind of sad.

Dana and I had beers at one of the small bars on Rum Cay and we played dominoes with the locals. The mail boat hadn’t come in weeks due to bad weather, so they ran out of beer after we’d only had one and they were almost out of rum! The one small market in town was in rough shape as well, with empty shelves and almost nothing for sale. We had dinner at the one restaurant in town, where we were assured there would be food available. The owner, Ruby, opened just for Dana, two other cruisers and me, and prepared a home cooked Bahamian meal of “peas and rice” (a local dish made with a type of bean, not peas), fried wahoo, fried chicken, salad, steamed vegetables, and cake with ice cream. It was fantastic. 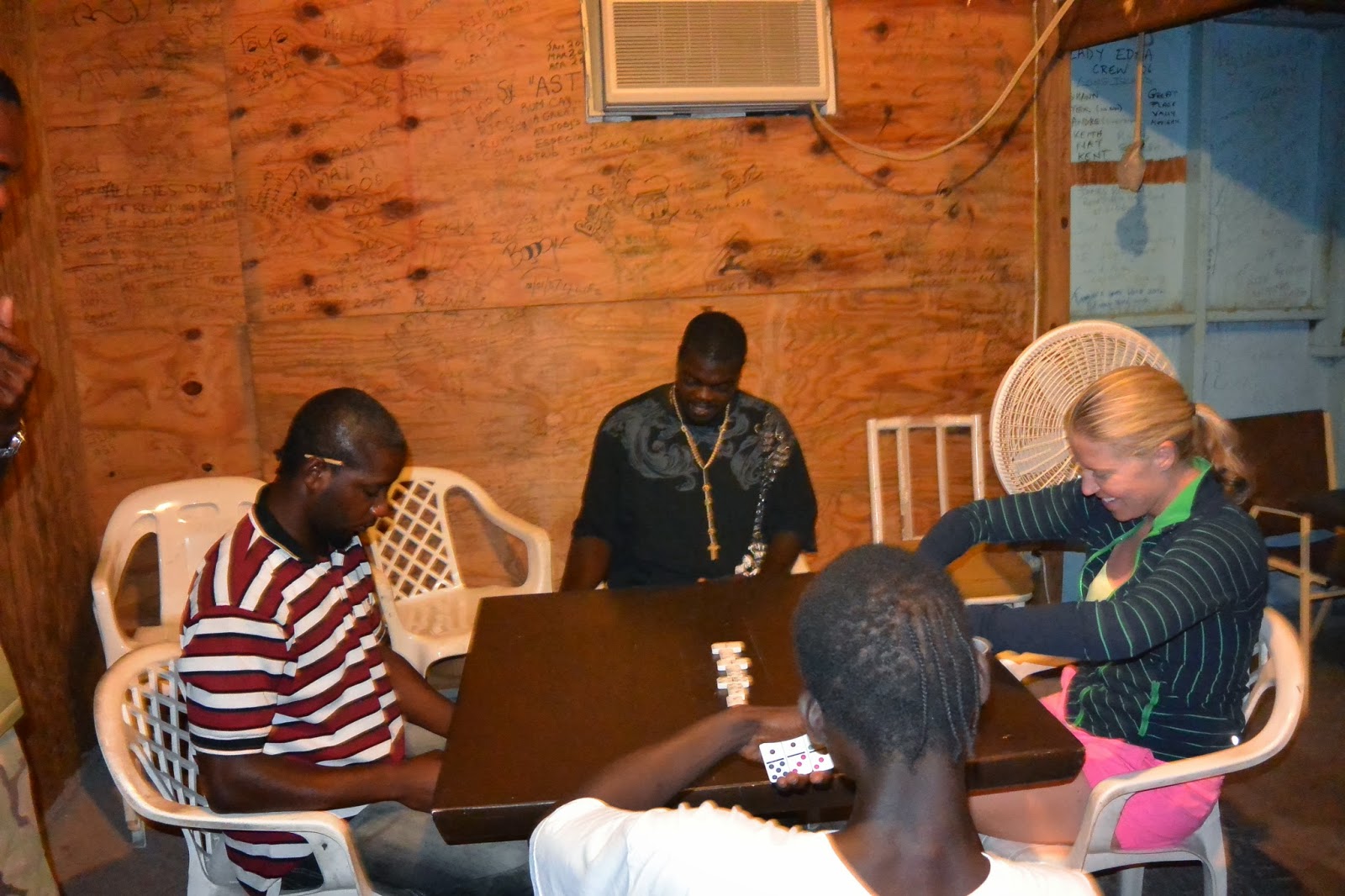 The other boats in Rum Cay were Canadian, and we all ended up getting along famously. We had sundowner drinks on Jeff and Debbie’s catamaran, Sea Sparrow, and we had them over for cocktails on Eventyr. I snorkeled a couple times looking for dinner, but didn’t see any lobsters and the fish were too quick for me. I guess I need more practice. I did, however, find five or six conch while out for a snorkel with Dana, Jeff, and Debbie. Pierre and Jeff (a different Jeff), French Canadians, knew how to extract and prepare the conch and all the cruisers sat down to a delicious fresh conch salad on Pierre’s 42 foot Beneteau, Lady Ella. Rum Cay ended up being a stopping point for us four sailboats and we’re all heading south. We left Rum Cay the same day and arrived at Mayaguana the same morning as a flotilla of sorts. Eventyr is the smallest, and slowest of the group so we left a couple hours before the others. We didn’t see or hear from the other boats at all during the 29 hour sail, but it was comforting to know they were out there if something bad happened (for example if our engine died). 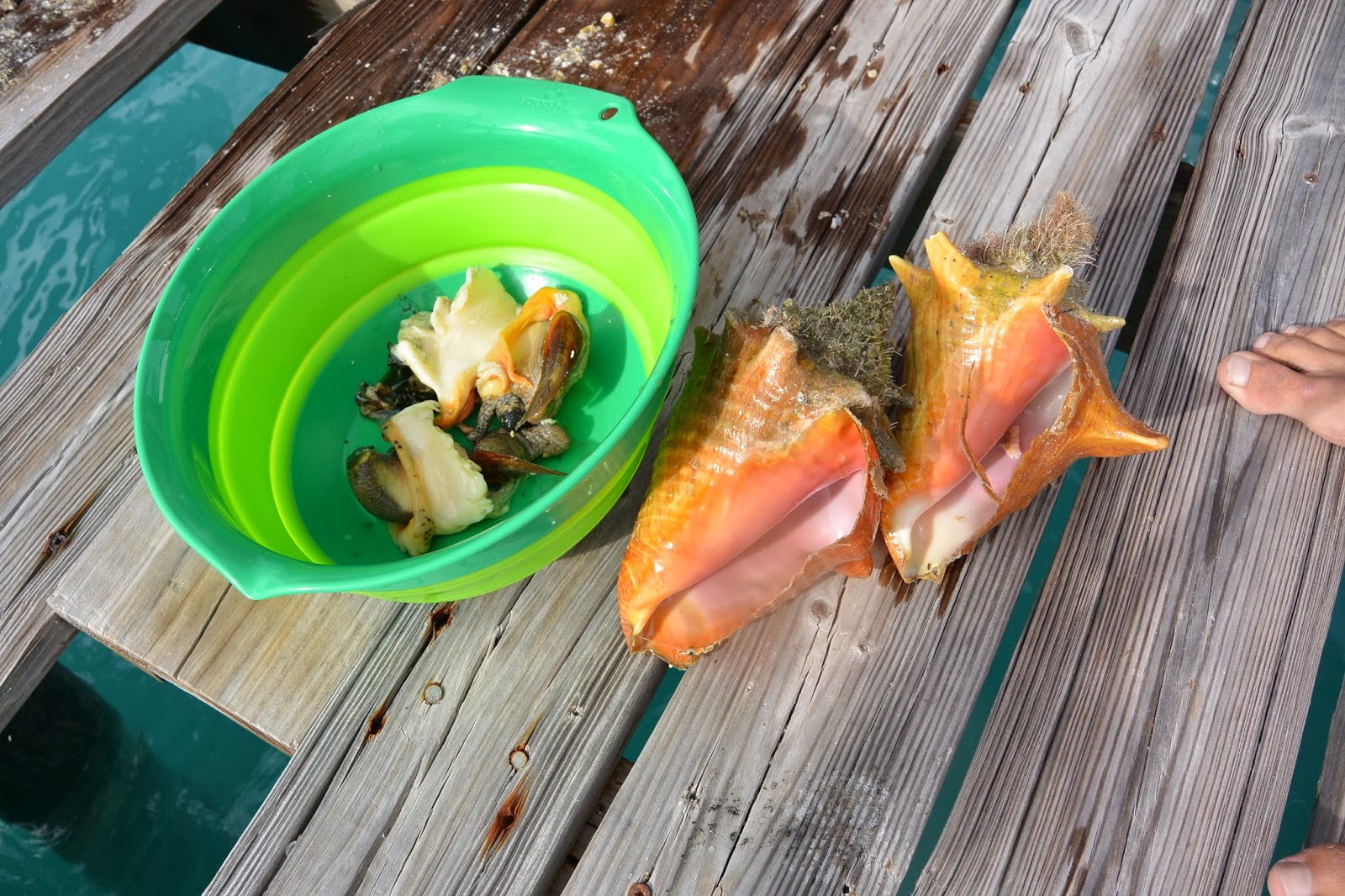 Cruisers look out for one another. A good example was something that happened late in the afternoon the day before we departed Rum Cay for Mayaguana. The four buddy boats anchored out for the night (to avoid that nasty, disheveled, dangerous dock and to skip navigating the unmarked channel at 5 am), and Dana and I dinghied to shore for some beach time, one last look at the internet which was available at a bar, and possibly a beer or two (since the mail boat finally arrived the night before).

Before our beers even arrived we heard a frantic call on the VHF, “If anyone has a dinghy in the water, we’ve run aground near the marina and the tide is falling. We need help!” Dana and I radioed back that we had a dinghy and we’d be over in a minute. The dinghies from two of our buddy boats came as well with their larger, more powerful outboard engines. Vision Quest was stuck hard in the sand and the captain was gunning his engine to no avail. The two Jeffs tied lines from the backs of their dinghies to the top of Vision Quest’s mast, Vision Quest raised all her sails and the captain again gunned the engine. It was a pretty amazing sight, a sailboat with full sails, heeled over catching the wind, but staying completely still. The hope was that the boat would lean over enough for the keel to pop out of the sand. After several unsuccessful tries, Vision Quest suddenly lurched forward and sprung free of her sandy trap. However, now she was under full sails heading into the coral strewn unmarked channel. Luckily, they made it out safely and anchored near us for the night. We just met up with Vision Quest again in Mayaguana and it turns out they broke part of their keel in the process. 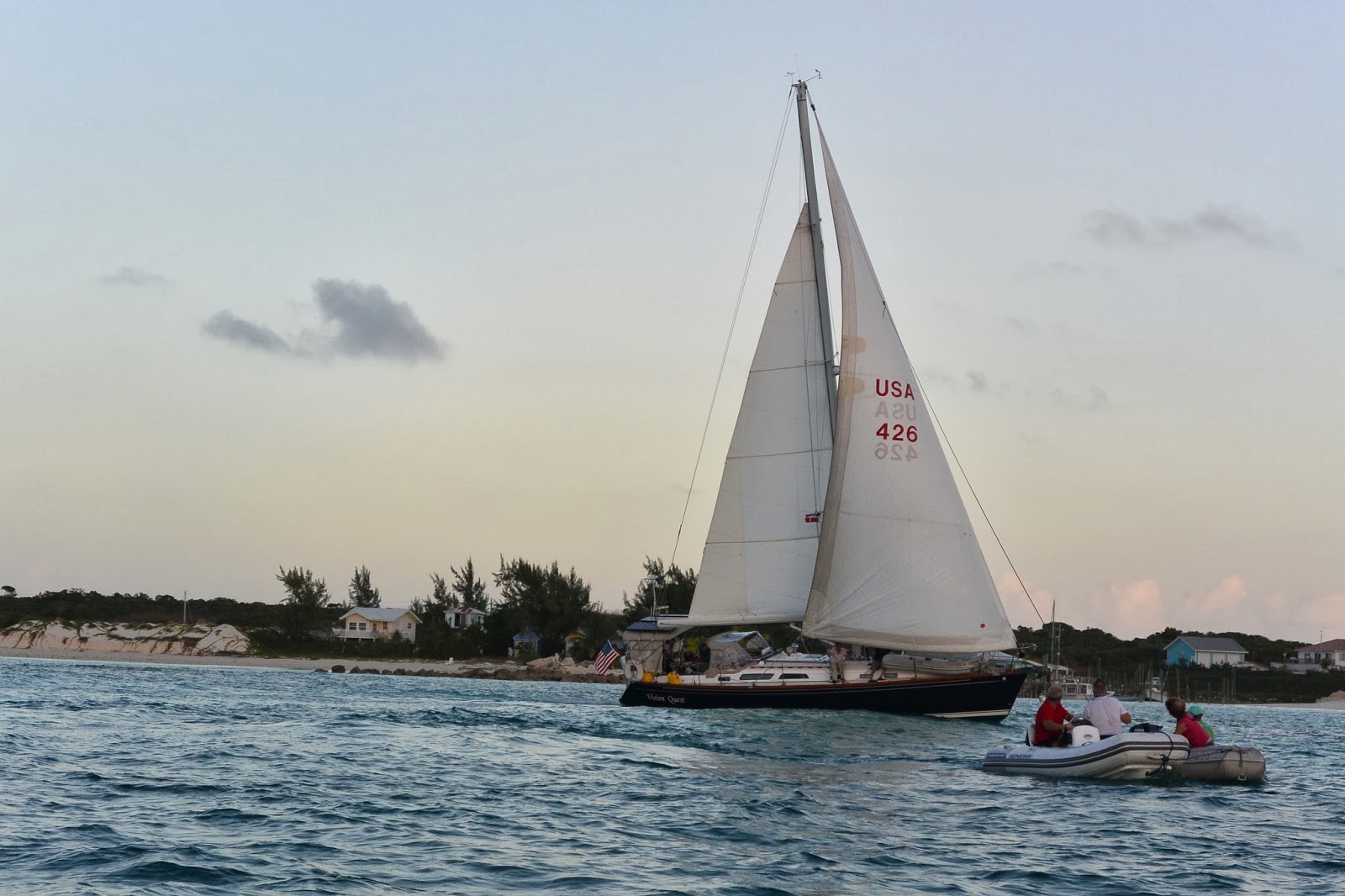 Now we’re stuck in Mayaguana waiting for another weather window so we can make it across the Caicos Passage to the Turks and Caicos (which is less than 50 miles away). Abraham’s Bay is another small settlement without much going on. I think Dana and I have already met most of the residents, as we went into town for dinner and drinks last night, filled our water jugs this morning, and went for runs. I’m confident the winds will shift enough for us to get the Providenciales to meet Patrck and Shanley before the 15th. In the meanwhile, I’ll hone my spear fishing skills and I’m sure we’ll have a few sundowner cocktails with the other cruisers anchored around us. We’re all waiting for the same weather window again. 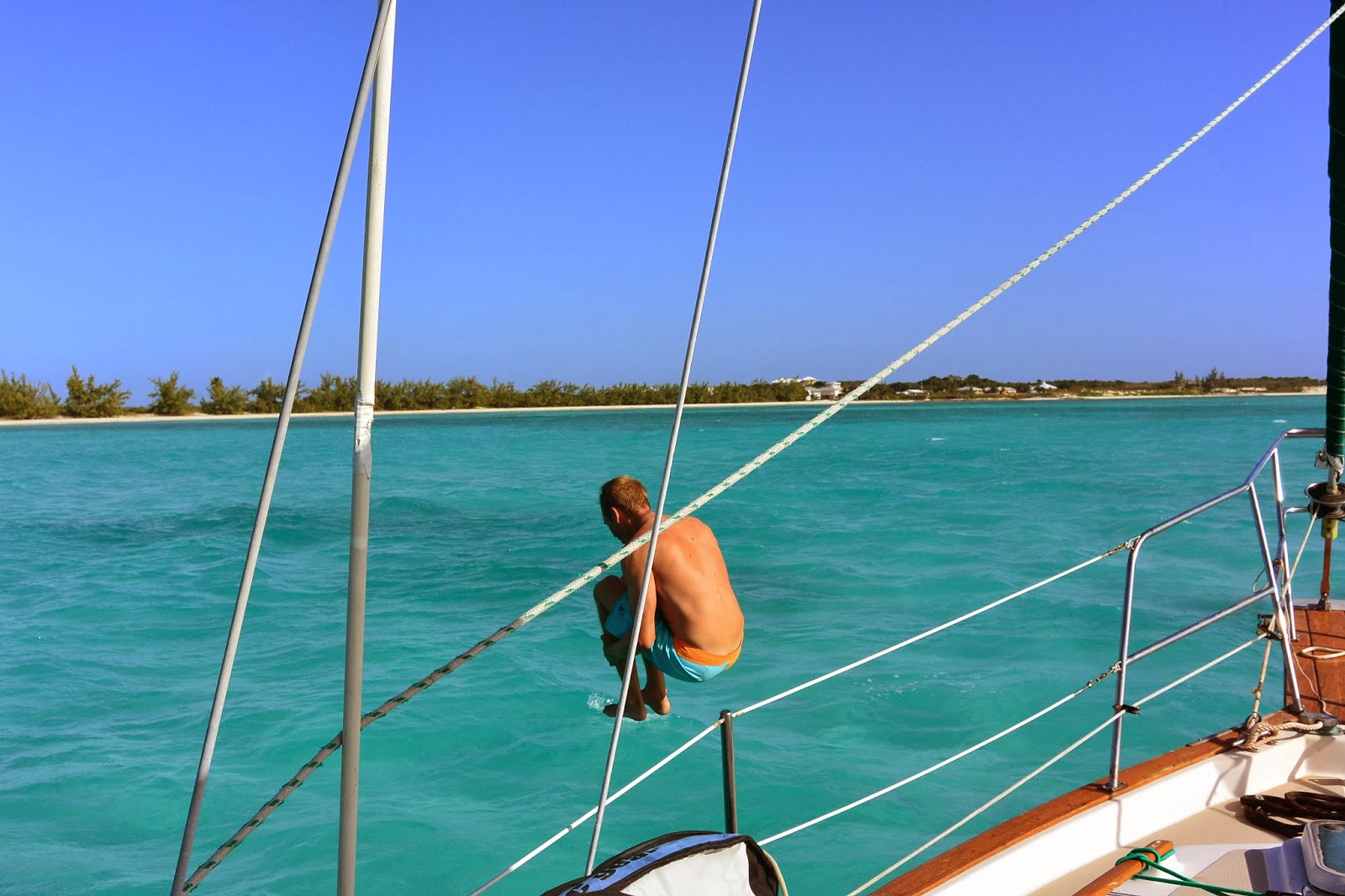