On Saturday, Dana and I got to witness a Bahamian tradition: Junkanoo. Over the holidays, typically on Boxing Day and/or New Years Day, locals don colorful costumes and parade down the street playing loud, festive music. Our friend Mike recommended we experience one, because he had a blast at Junkanoo several years ago. The big Junkanoo is in Nassau, but many of the smaller towns have their own, scaled-down versions. Our Junkanoo was in Georgetown. The festivities seem pretty similar to a Mardi Gras parade, Carnivale in the Caribbean, or the Mummers Parade in Philly, right down to the excessive alcohol intake. 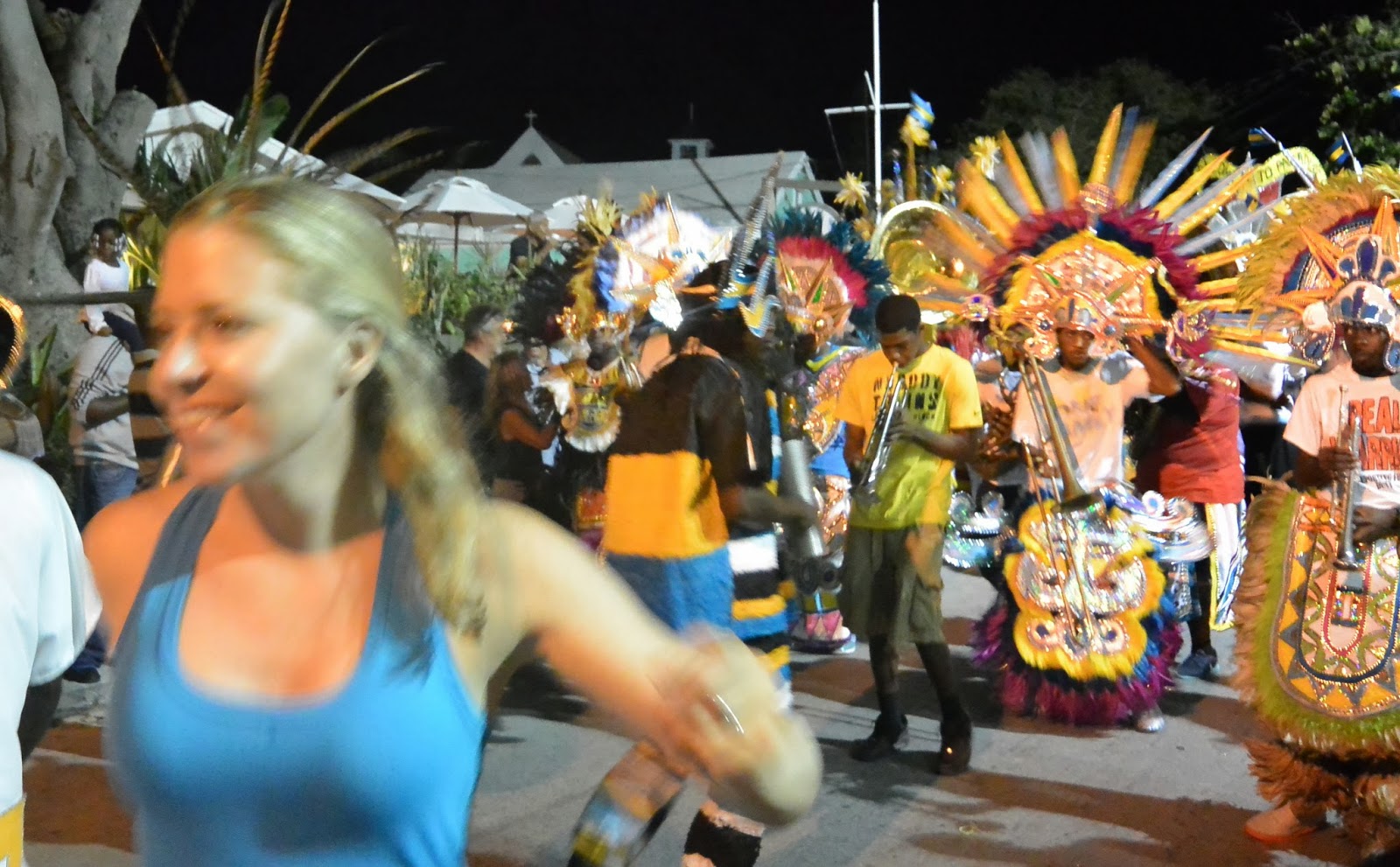 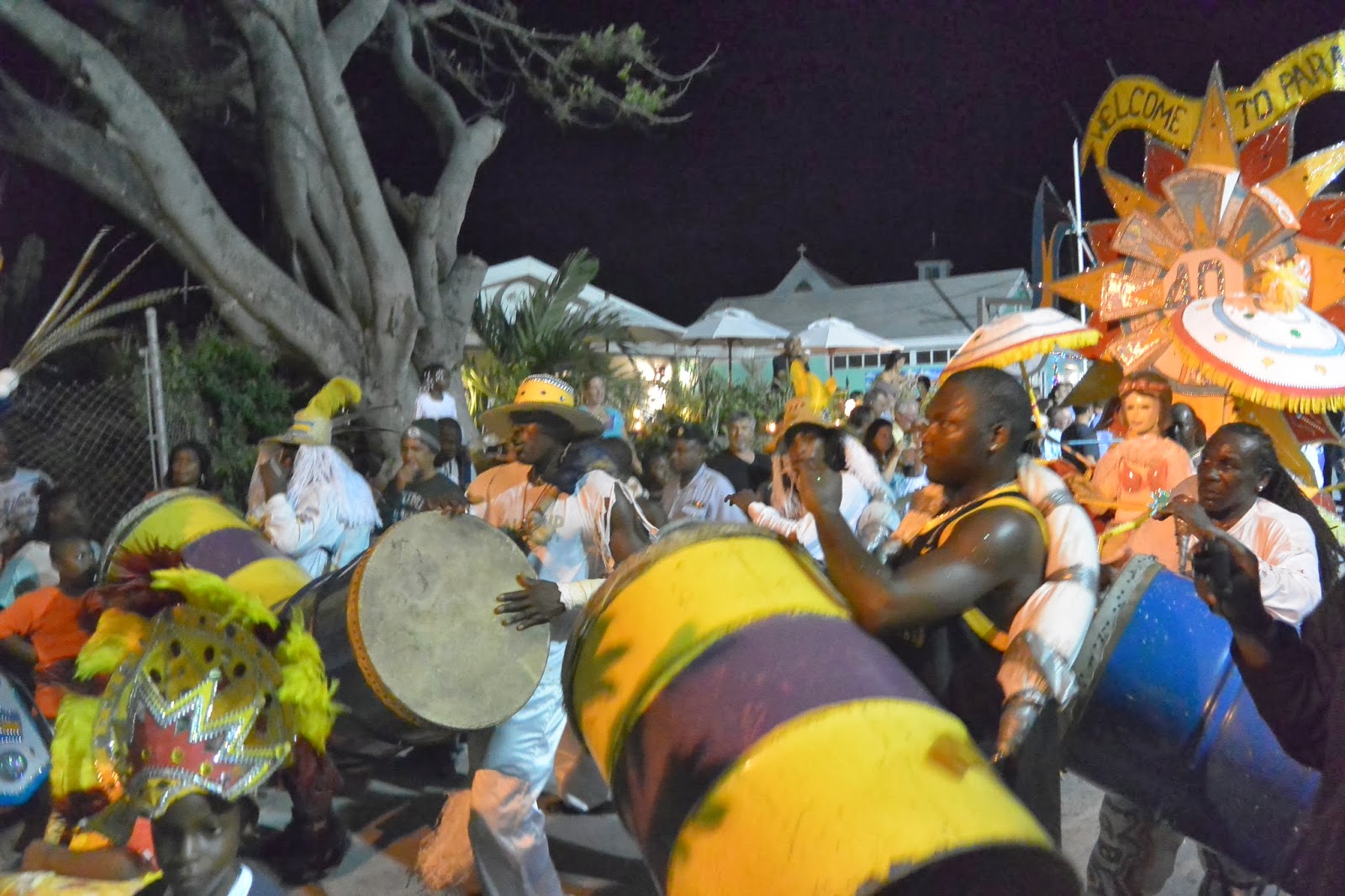 Since Spanish Wells, we’ve made short work of the Exumas. Georgetown is the last stop before we start working our way down the final stretch to Turks and Caicos. Our first stop in the Exumas, after a long motor sail on a calm day from Spanish Wells, was Normans Cay. It was Christmas Eve and I read about a thatched roof bar and was hoping we could stop in for a Christmas Kalik (the local beer). However, we were too exhausted and instead made a Christmas Eve dinner of Yellow Tail Snapper I caught that day. 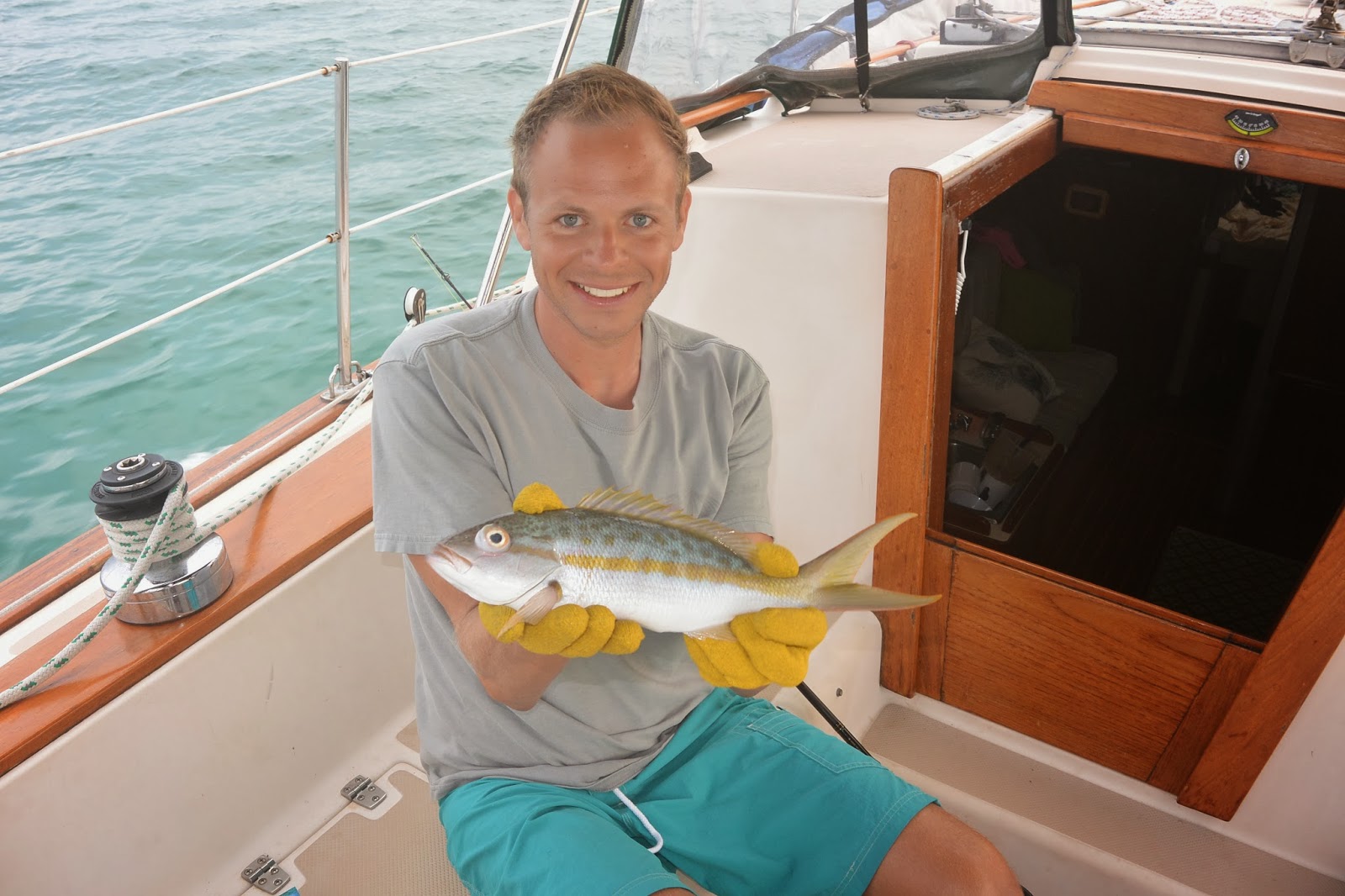 We hightailed it Christmas Day to Staniel Cay, a popular cruising destination, under fantastic sailing conditions. In Staniel Cay, we finally encountered the number of cruising sailboats I thought we’d be running into all the way down the Bahamas. We anchored around dozens of sailboats and the Staniel Cay Yacht Club bar was hopping that night. So much so, that they were completely booked for dinner. We were also hoping to get a slip at the marina so we could take hot showers and not have to worry about whether our anchor was holding or if another sailboat was swinging too close to us. Not to be either. Their few slips were filled with enormous motor yachts. Dana was sad that night, missing family and friends, and not getting any of the small things we hoped for that Christmas Day. The Internet wasn’t really working either, and we were stuck eating appetizers at the bar for our Christmas dinner.

The next day, however, made up for all of it. We got an early start and went for a run together around Staniel Cay. A short dinghy ride away, we pulled up to the beach at Big Majors Spot, where the cruising guide promised wild pigs greet you at the shore. I’ve read about these swimming pigs in various blogs and cruising memoirs, and I’ve been excited to see them since we started the trip. Sure enough, upon dropping our small mushroom anchor a few feet from shore, the pigs came rushing out of the woods looking for handouts. Although some cute piglets ran up and down the beach, the pigs that came swimming out to us were huge sows (or boars, I can’t really tell the difference). We brought carrots and the pigs were more than happy to eat them out of our hands. Given Dana’s Iowa background, she was not scared off by the large beasts. Another small boat came by to look at the pigs, and mostly everyone stayed on board, apparently too frightened to get in the water with the friendly porkers. 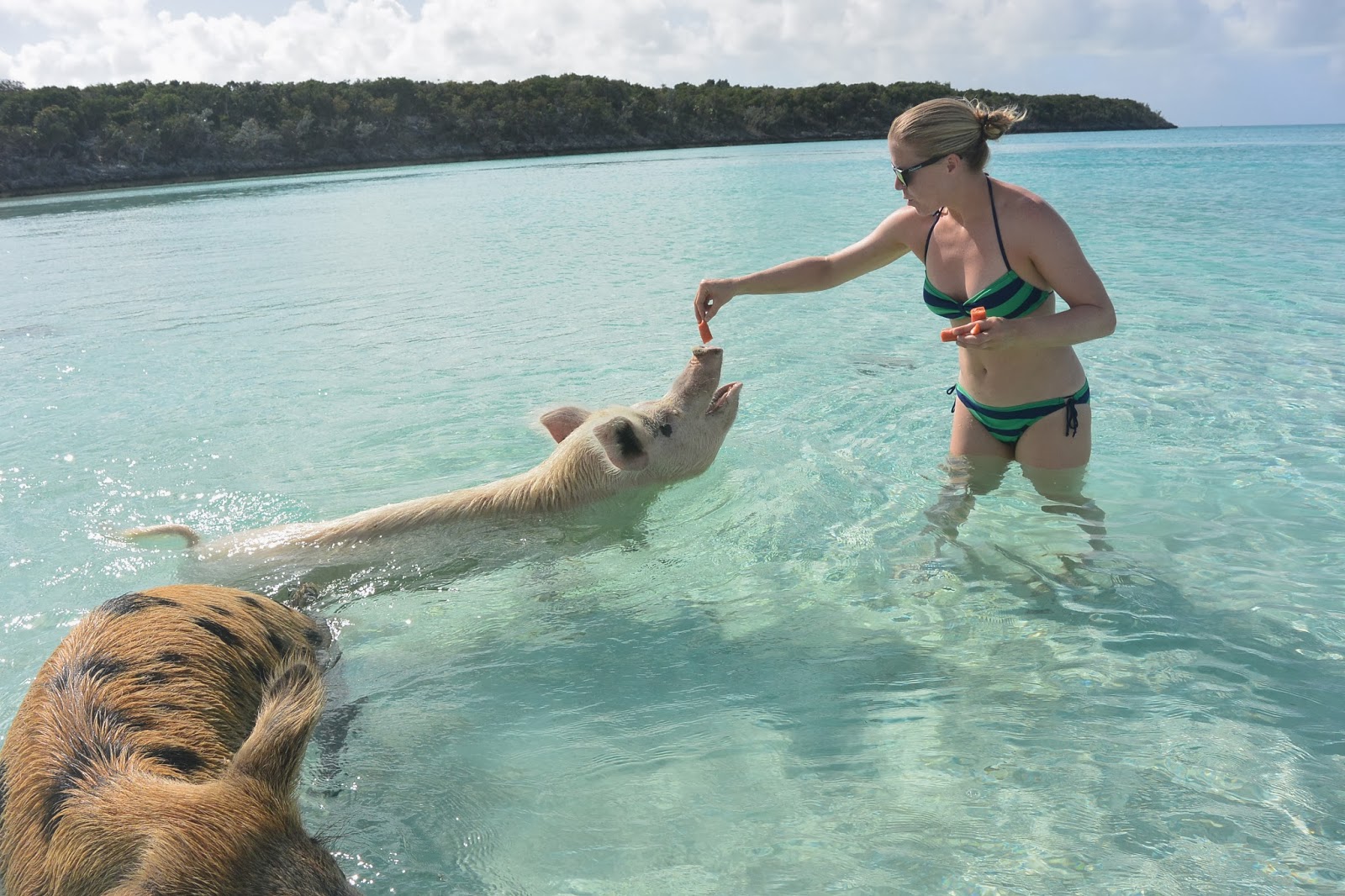 That mission accomplished, we dinghied to another popular attraction, Thunderball Grotto. We read about the grotto in our cruising guide, and again were not disappointed. You swim underwater into a cave that has holes in the ceiling. In full sunshine, like that day, beams of light shine down through the water creating beautiful colors on the bottom. Fishing is not allowed nearby and many guests feed the fish, so the grotto was teemed with colorful reef fish. When a boat full of tourists made the scene, we decided we’d seen enough and headed back to Eventyr. 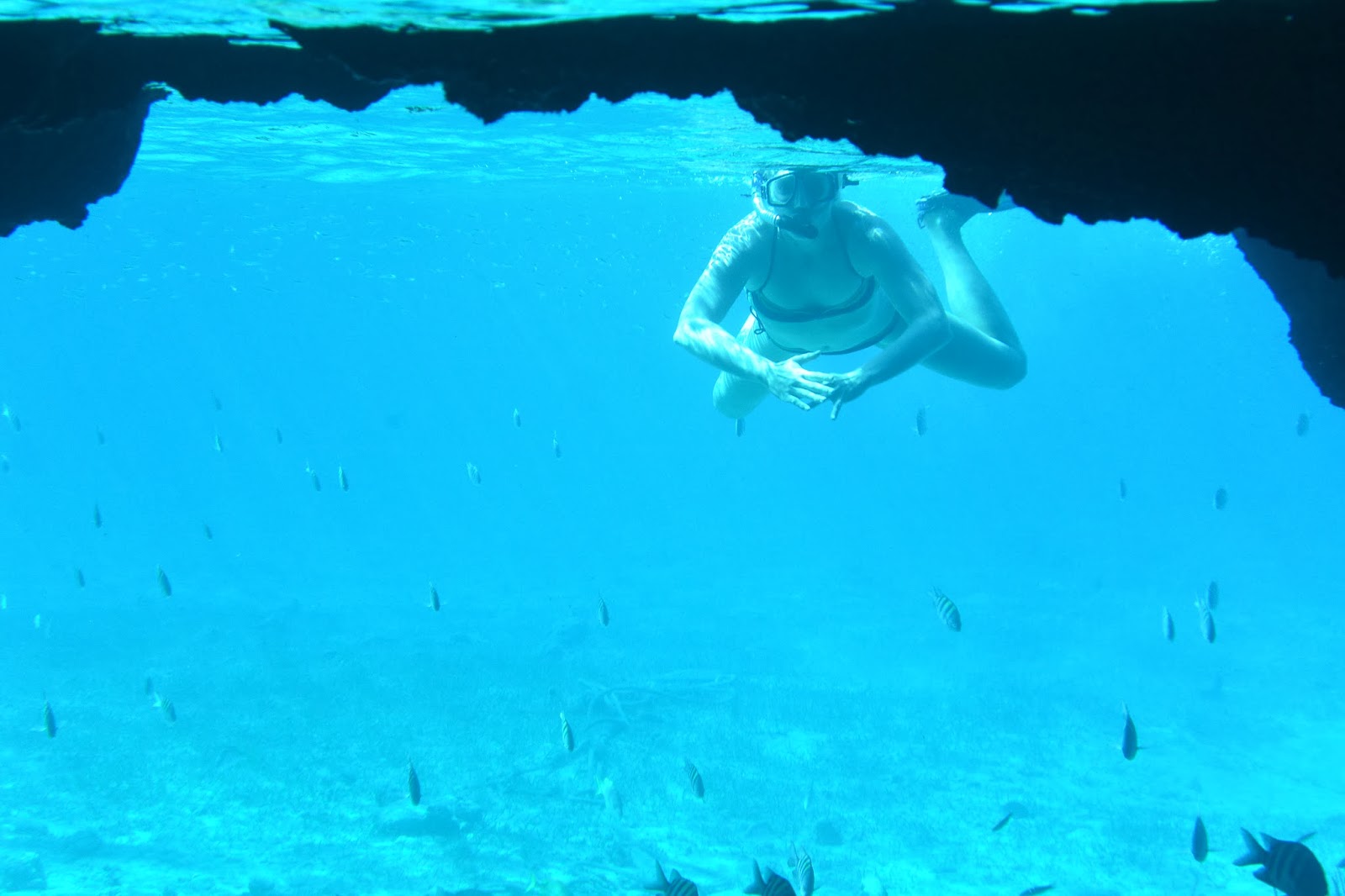 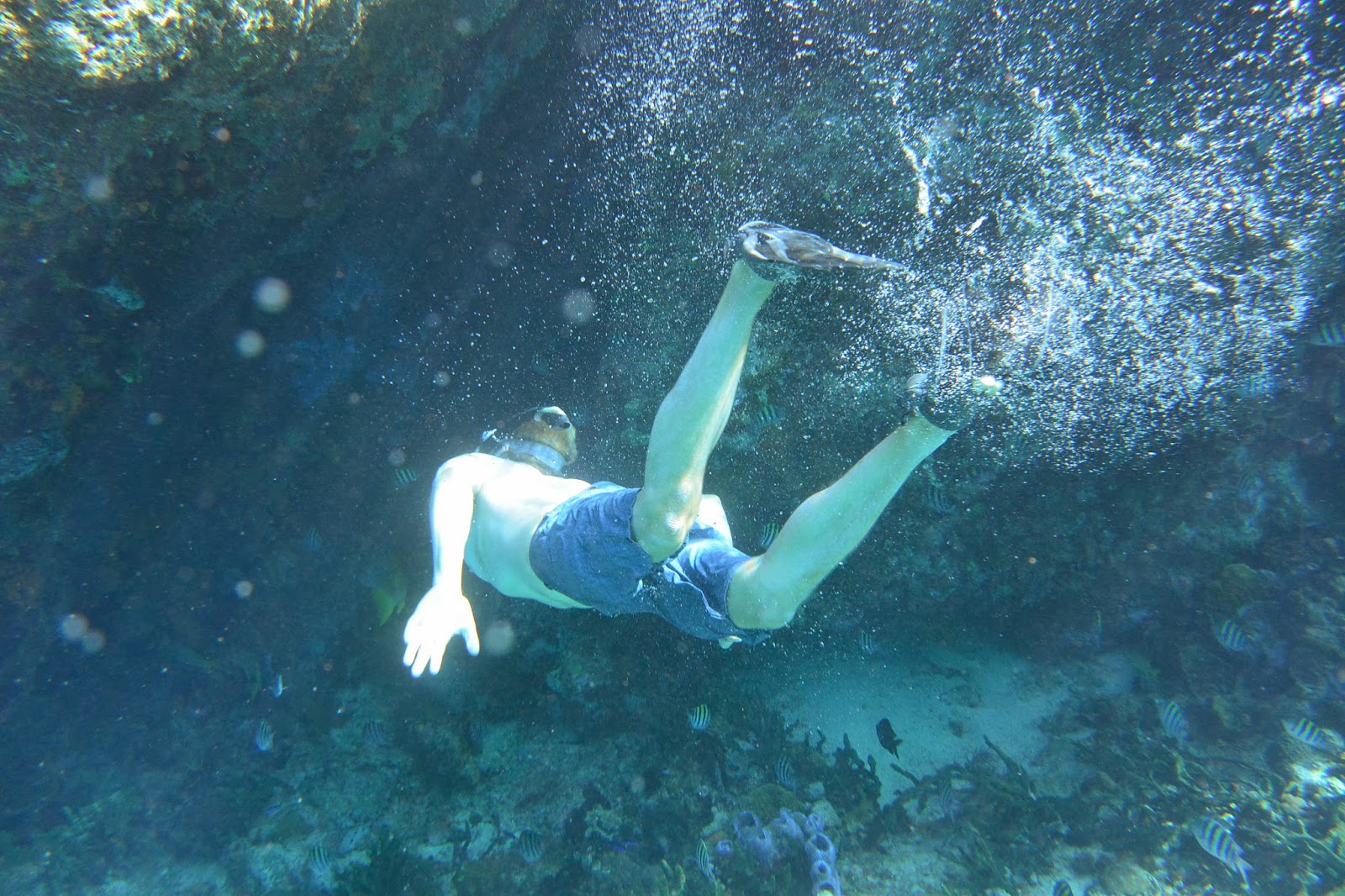 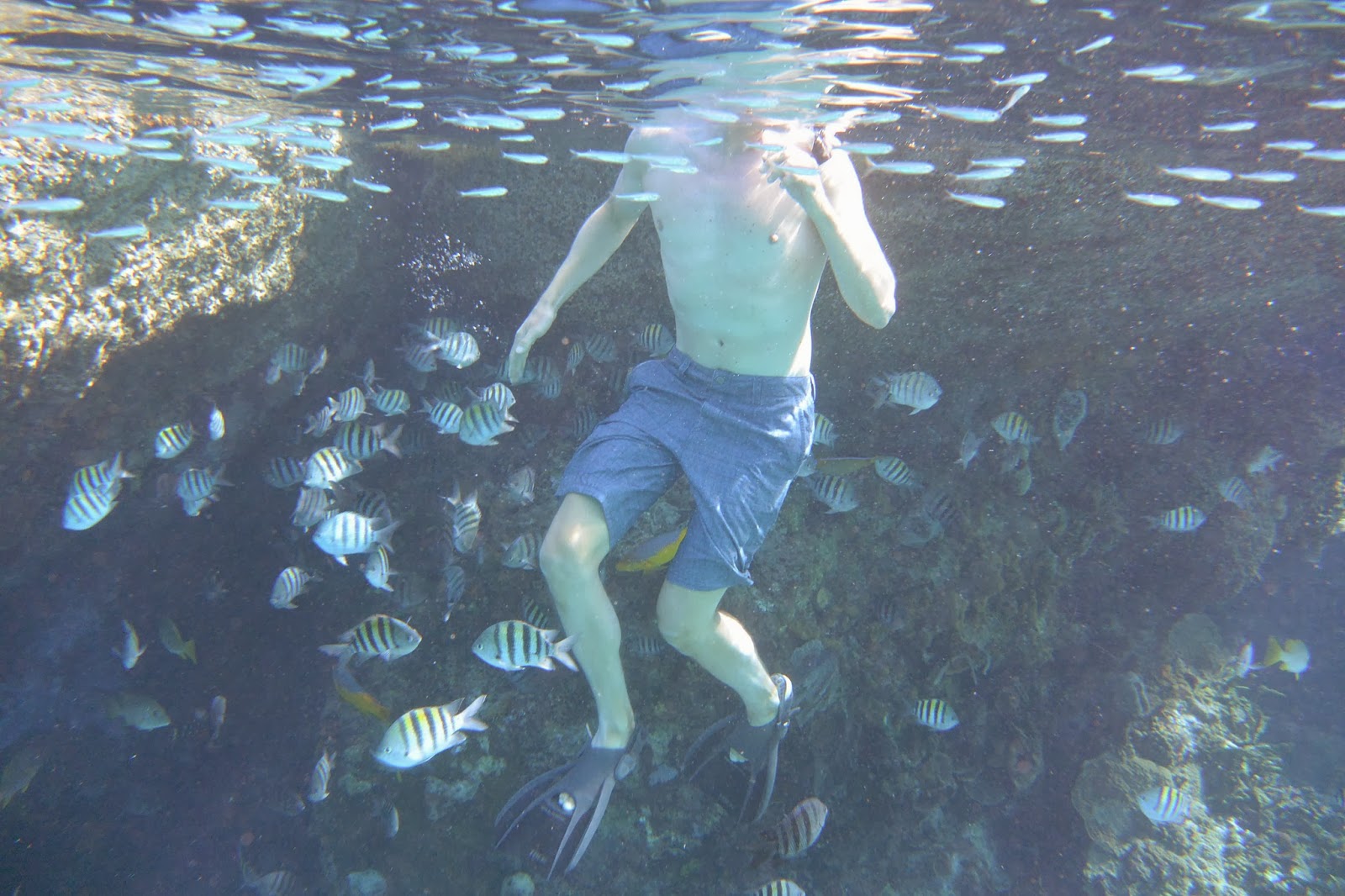 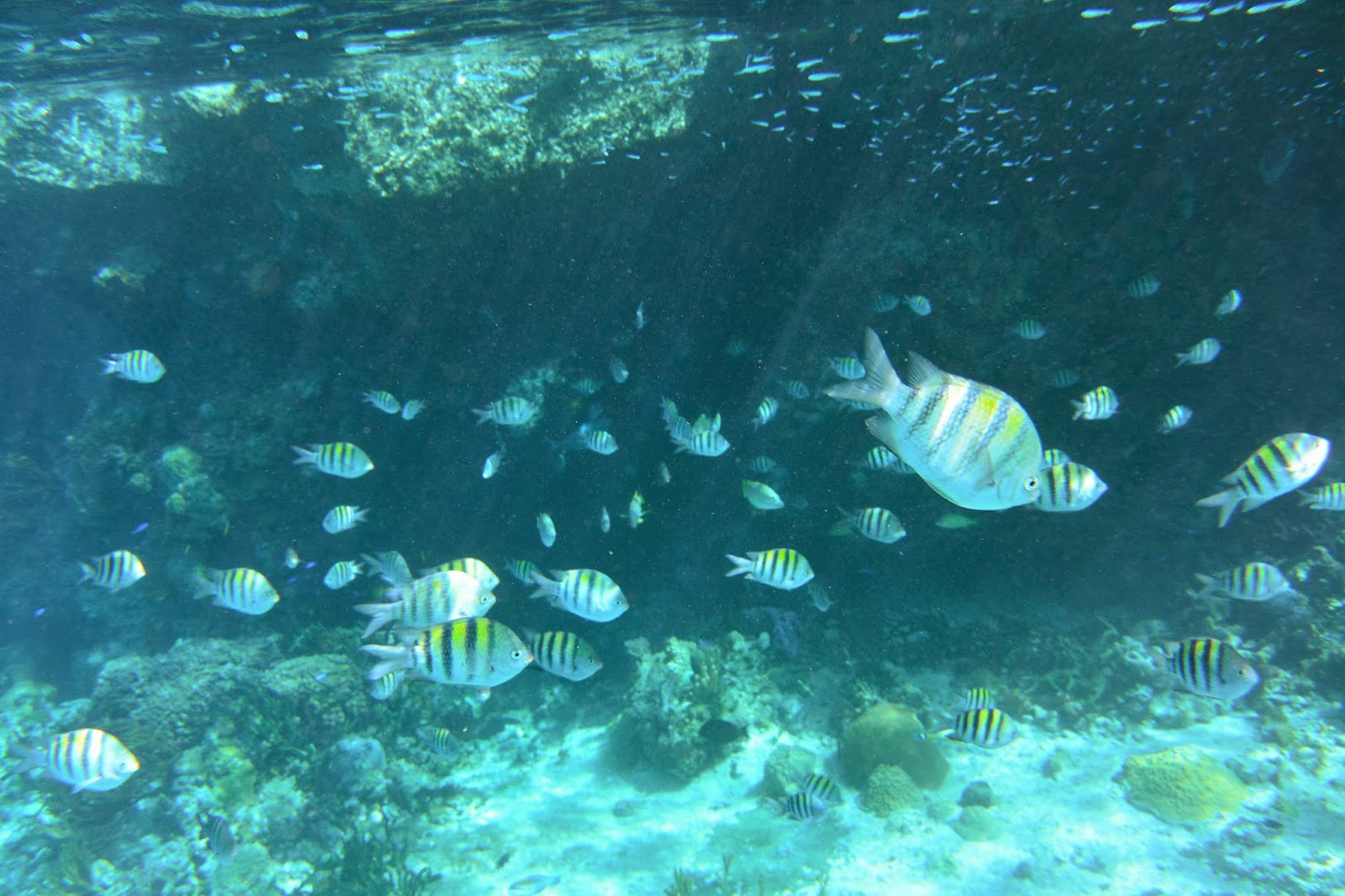 That afternoon we raised the anchor and continued on to Little Farmers Cay, again in hopes of staying at a marina. Our hopes were dashed when no one responded to our VHF calls and the marina was closed and seemingly abandoned. We headed to shore anyway and made the long walk into the tiny settlement. It being Boxing Day, which is apparently a big deal in the Bahamas, the two or three stores in town were closed as well. We walked into the one bar and the proprietor was sitting alone in the dark. We asked, “Are you open?” to which he replied, “I am now.”

Terry, the owner of the Ocean Cabin Bar, was eager to engage in socio-political conversation and we spent the night discussing the societal woes facing the world today. After a couple hours and a drink or two, we decided on a solution to cure all the poverty, war and suffering worldwide: One love (as suggested by Bob Marley). We thanked him for the drinks and rousing conversation and headed back to Eventyr. Another thing Terry did for us was find out there was a Junkanoo happening in Georgetown on Saturday, so we should probably leave Little Farmer Cay early the next day to be there in time to catch it.

Georgetown’s Elizabeth Harbour has been referred to as chicken harbor, because many cruisers make it this far and are too chicken to go any further, where open ocean is more frequent and American-style conveniences become fewer and farther between. In “An Embarrassment of Mangoes, a Caribbean Interlude” a book about a couple from Canada who took two years off their jobs to live on a sailboat and cruise through the Caribbean, the couple spent three months in Georgetown. Dana and I are reading the book together right now, and we can see why it was hard for them to leave!

Upon entering Elizabeth Harbour, I caught a fish big enough to eat for dinner, and dolphins swam along the side of our boat. The water is the intense turquoise color you imagine when you think about the Bahamas, and the sandy bottom offers great holding for boat anchors. There are two grocery stores, reverse osmosis water free for the taking at the dinghy dock, sailing weather reported every morning over the VHF, dozens of friendly cruising sailors with whom to spend time, and stunning beaches and snorkeling within dinghy distance. Everything Georgetown has to offer even made up for the fact that we still don't get to stay at a marina. 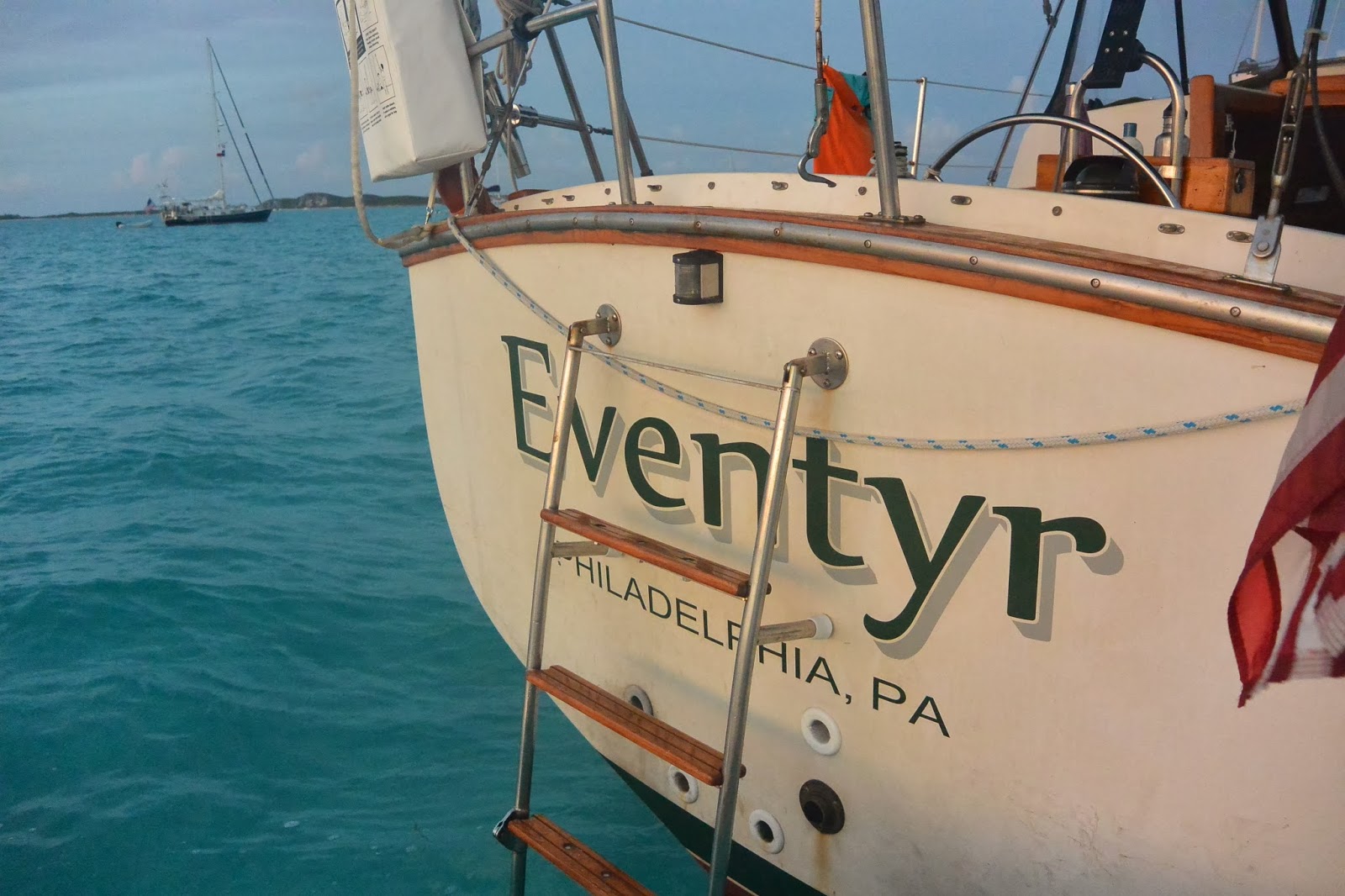 Yesterday, we dinghied over to Volleyball Beach where the beach bar, Chat and Chill, serves the freshest conch salad you’ll ever get. One guy gets the live conch out of the shell, while the other guy chops onions, tomatoes, green peppers, navel oranges, sour oranges, and scotch bonnet pepper, and mixes it all together with sea salt before scooping it into a bowl and handing it to you. 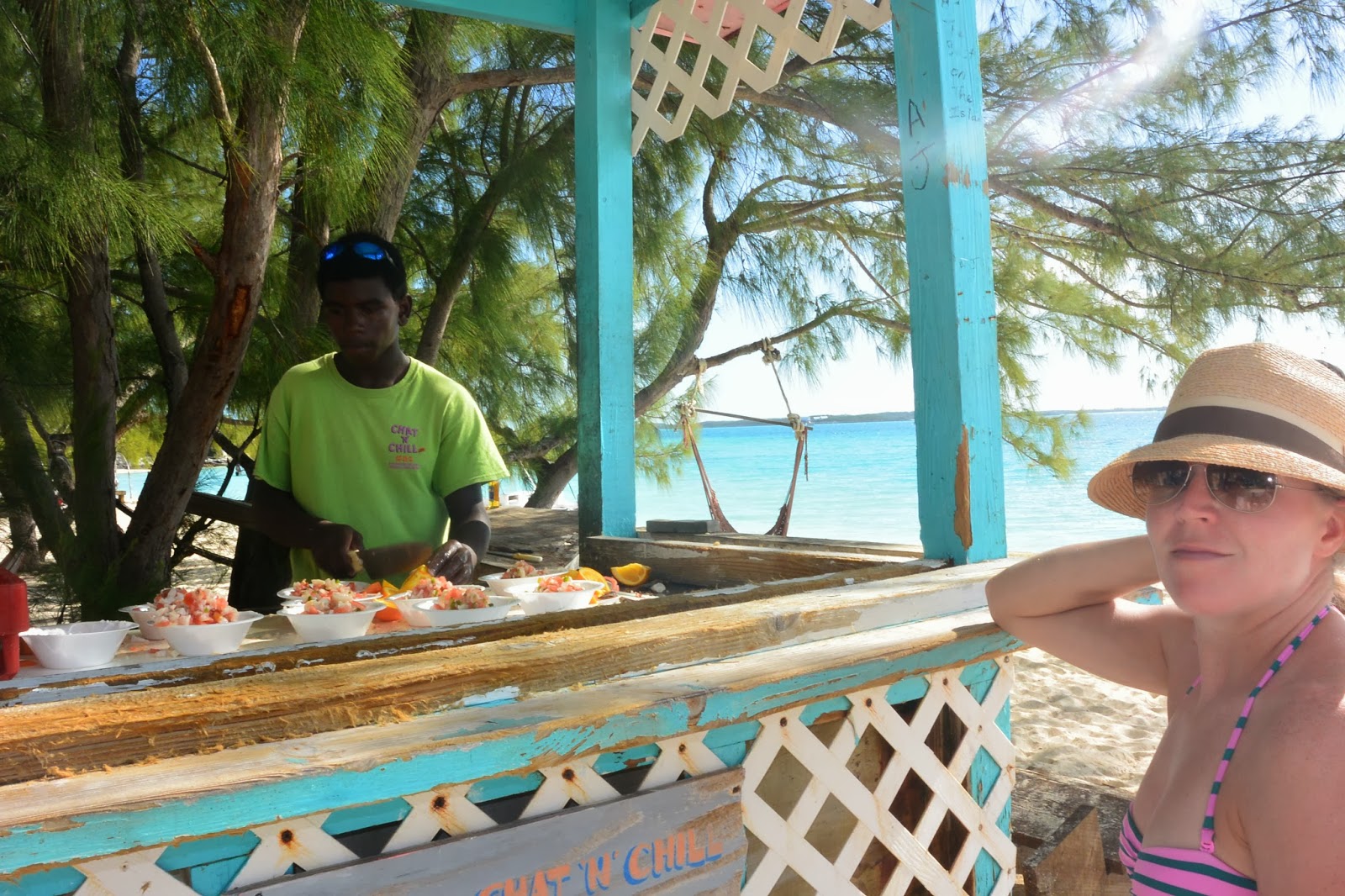 A side perk of this process is that the scraps of inedible conch attract sting rays, who have become accustomed to being hand fed. Not to be one-upped by Dana’s pig-feeding, I seized the opportunity to hand feed some large sting rays that swam right into ankle deep water for the meal.

Next, we have to head back out into the open Atlantic for our trek to Turks and Caicos, which will take several days of sailing. We’ll wait here for the weather to be right so we have a more comfortable sail than our last couple open-ocean crossings. Let’s hope we don’t get stuck in Chicken Harbor for as long as the couple from “Embarrassment of Mangoes!” We have a date with friends in just a couple weeks.
Posted by Unknown at 9:02 AM