We’re several days into the Intracoastal Waterway (ICW), which officially stretches from Norfolk, VA to Northern Florida (and unofficially from Maine to Key West). It’s a collection of rivers, creeks, bays, canals and sounds that keep boats inland so they don’t have to go out into the rough Atlantic Ocean. Supposedly, it’s shorter and faster than going out into the ocean as well. The downside is that all boats have to motor pretty much the whole way, power boats and sailboats alike. Our diesel fuel bill is starting to add up. Luckily, since we’re so slow, our fuel mileage is pretty good :-) Another positive about the ICW is that it's quite beautiful at times. Currently, we are midway through North Carolina. 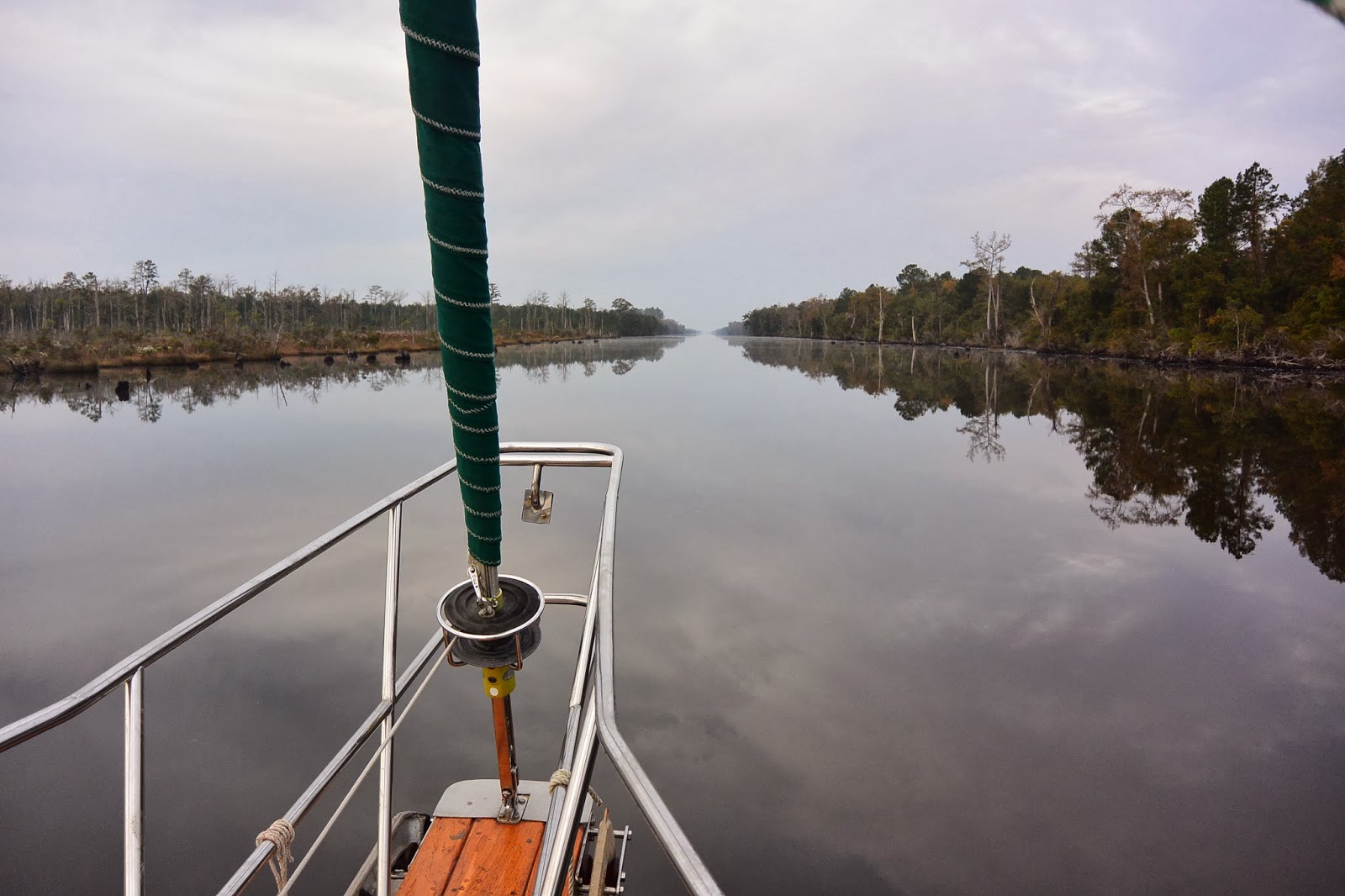 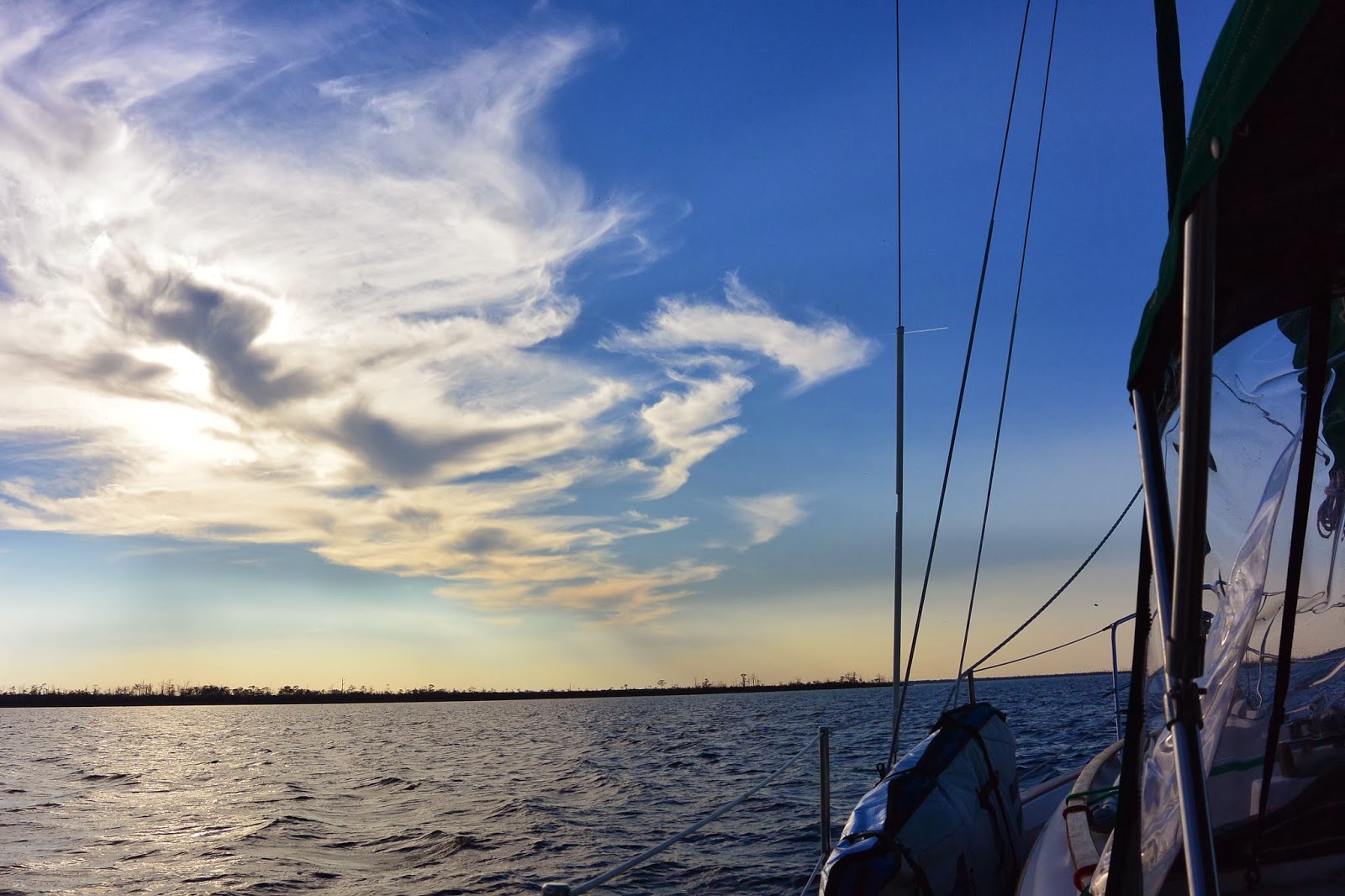 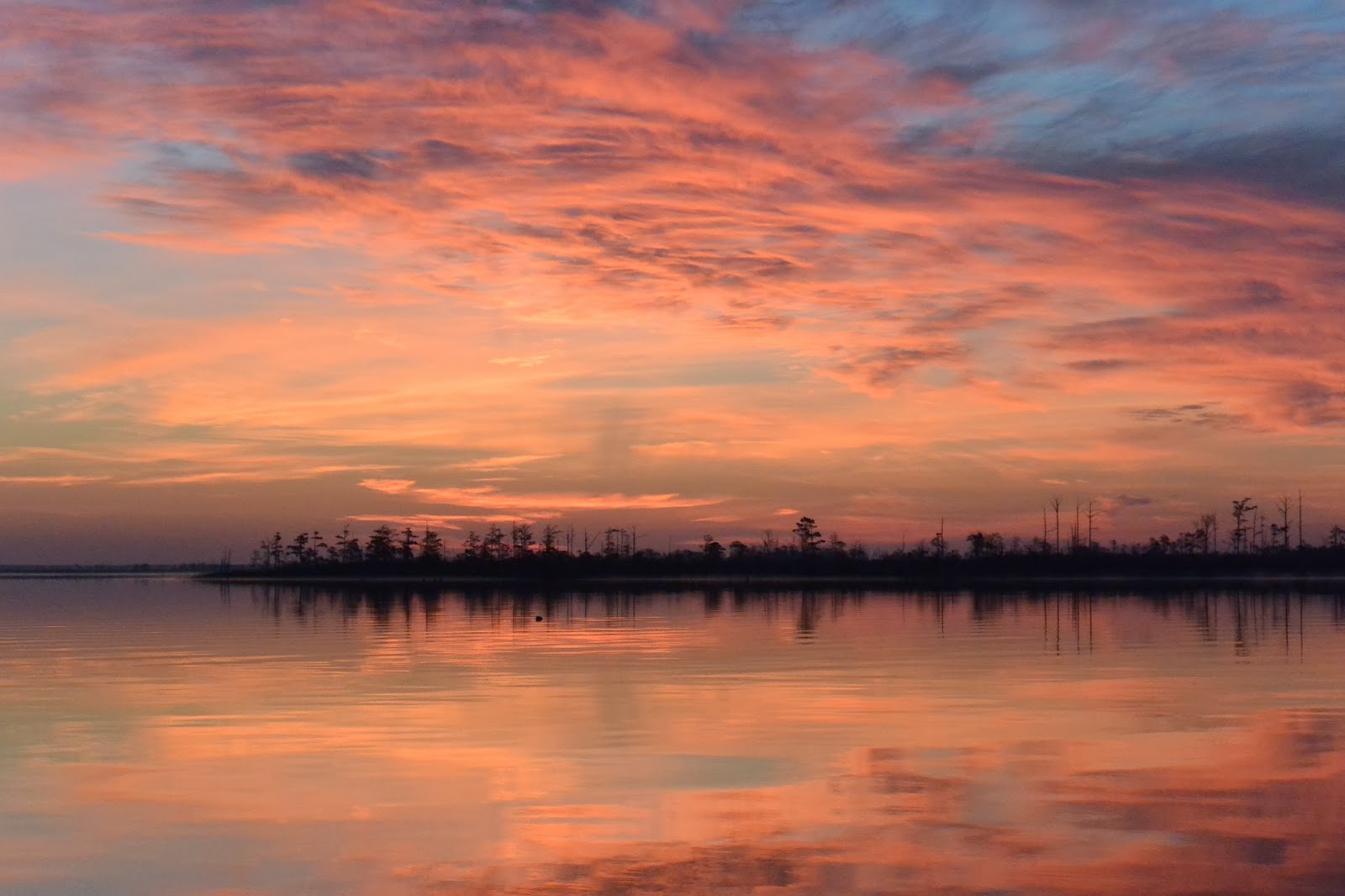 This is a whole new experience for Dana and me. Aside from contending with big commercial ships and having to be very familiar with “the rules of the road” on the waterway, we also have to monitor various channels on the VHF to listen for bridge openings, if boats intend to pass us, coast guard notifications, etc. We’ve had the excitement of having swing bridges, lift bridges, and draw bridges open for us. We even went through a lock with several other cruising sailboats heading south. It was like a mini panama canal! 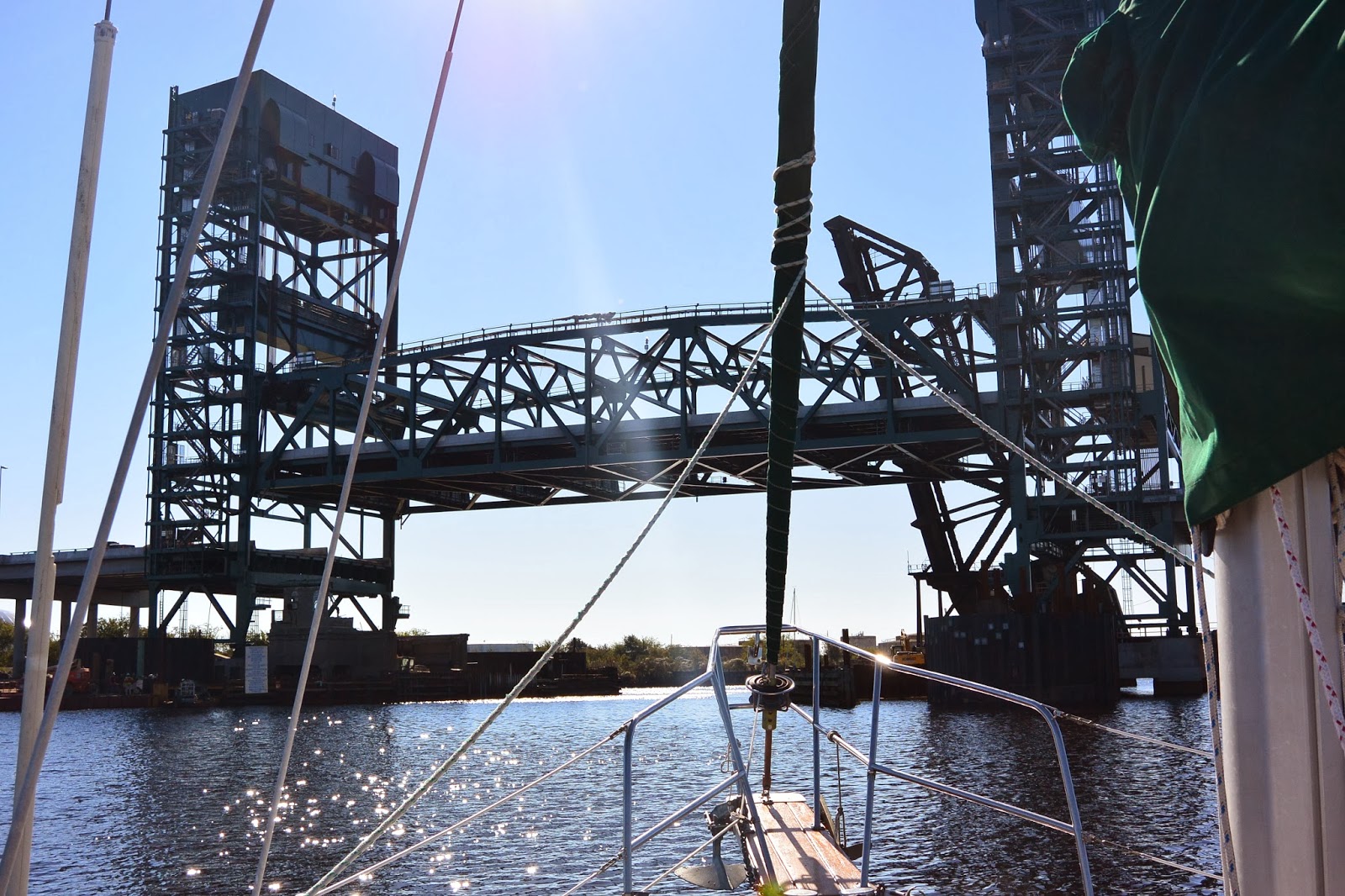 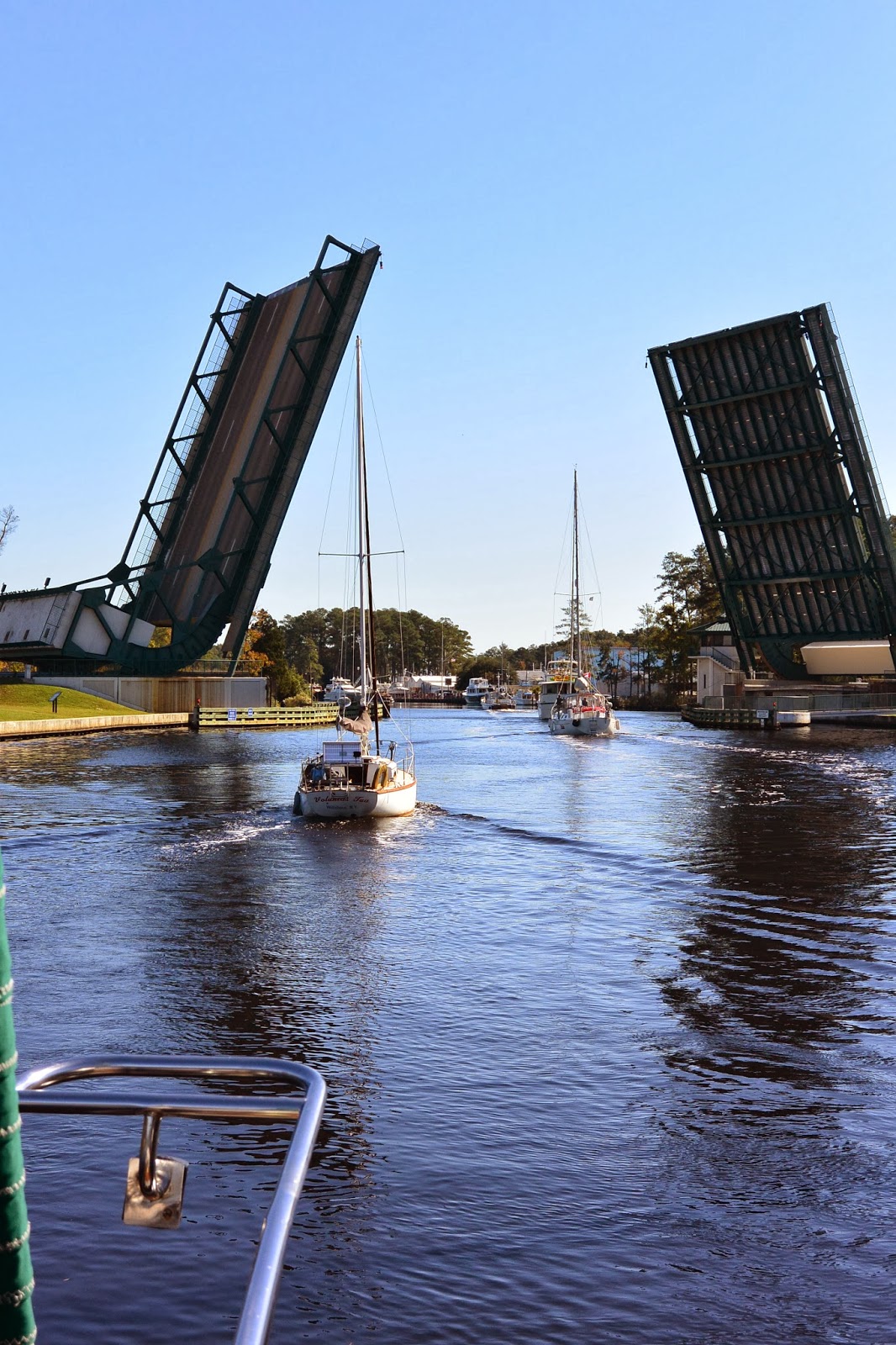 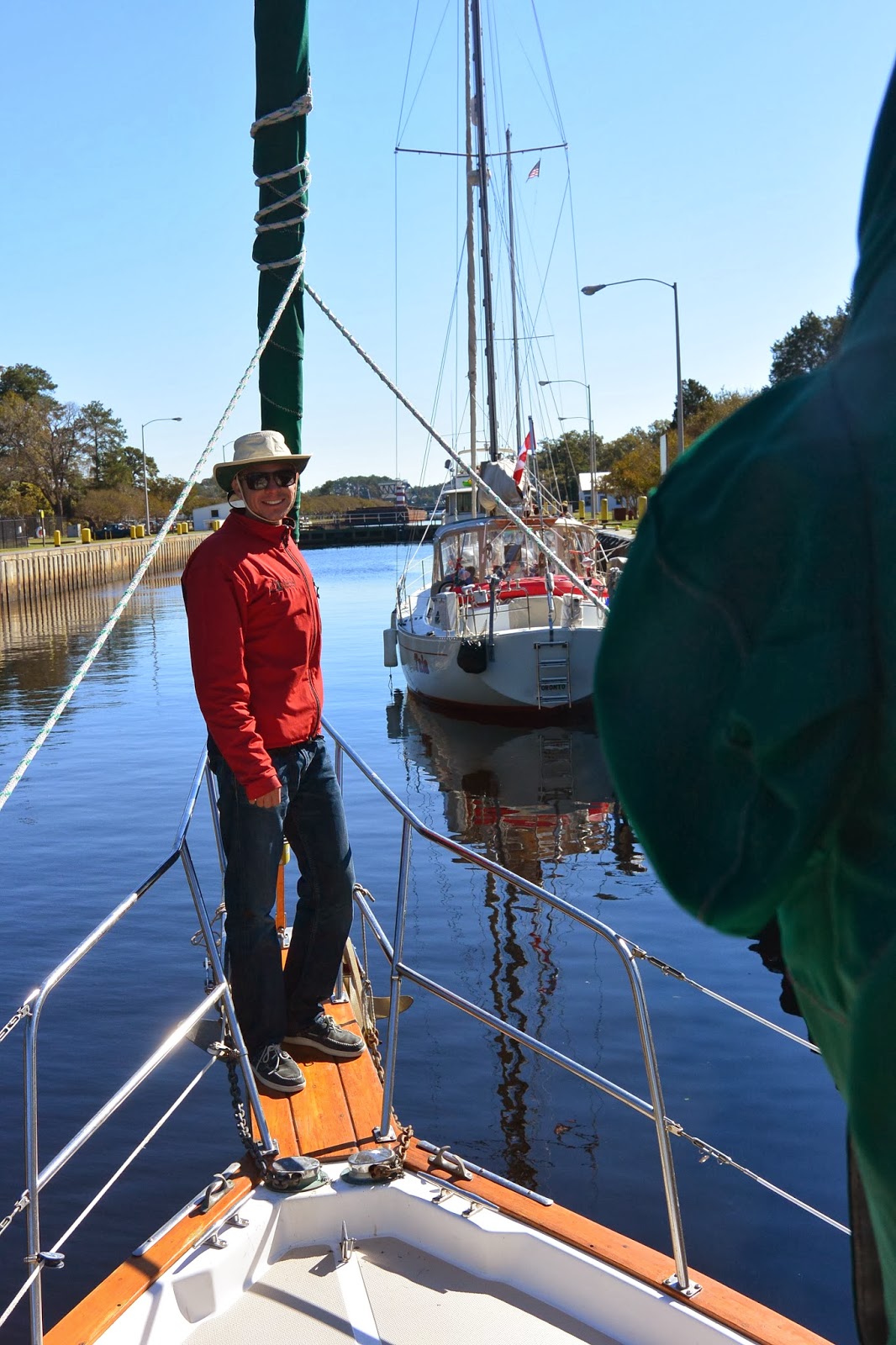 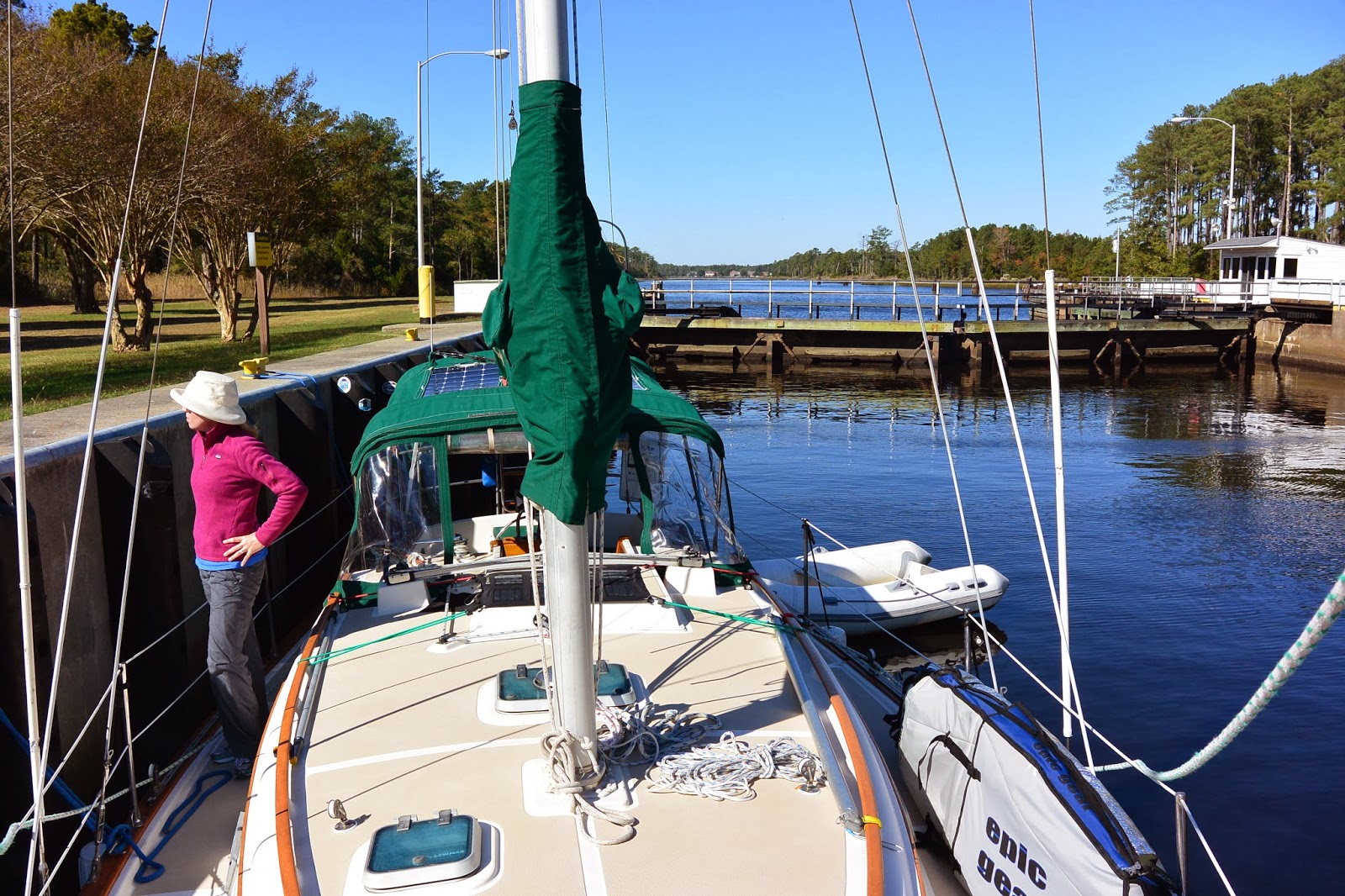 We're definitely within a flock of boats with the same thing on their minds: the tropics. We met a couple from Canada on a sailboat with two young kids on their way to Granada. When I asked how long they’ll be gone, the dad replied “a year, two, five, I don’t know. It depends how much we like it.” Some adventurous souls. At the end of each day, we all end up either anchored near each other or at a marina. There isn’t much chatting at the anchorages yet because it’s pretty cold at night and everyone is tucked down below in their boats where it’s warm. I’m sure there will be more socializing once the nights get warmer and cruisers start motoring around in their dinghies. 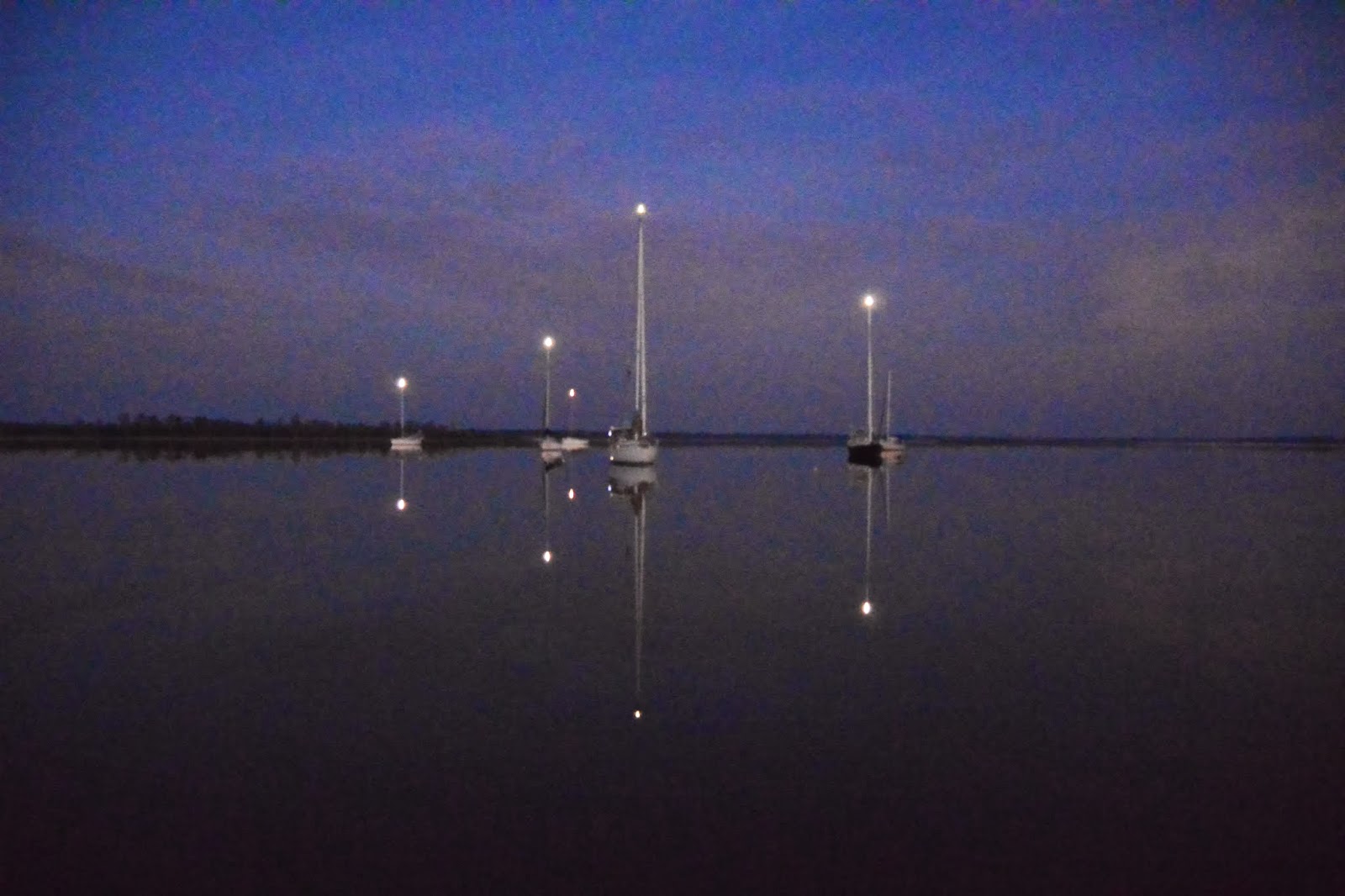 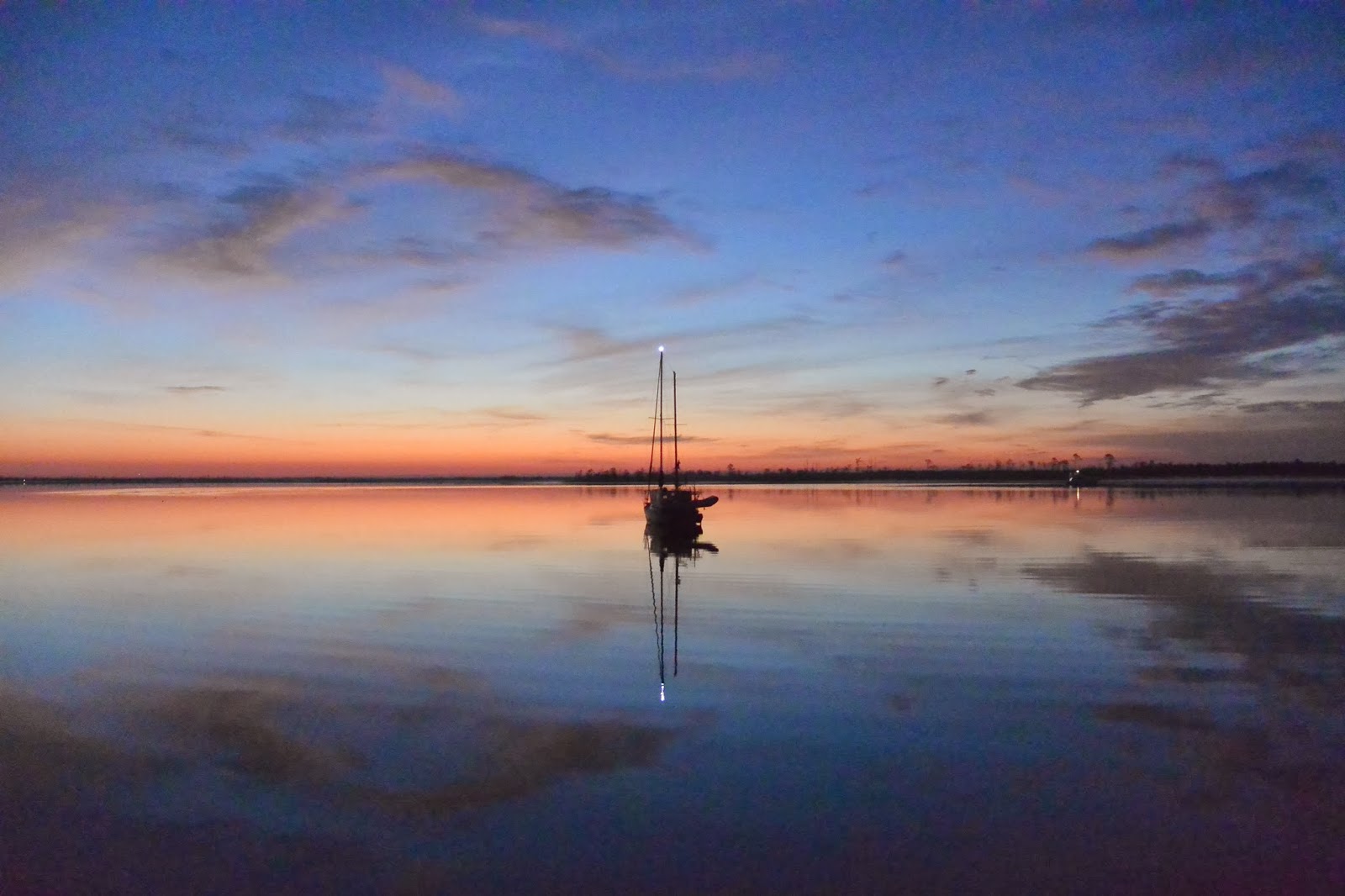 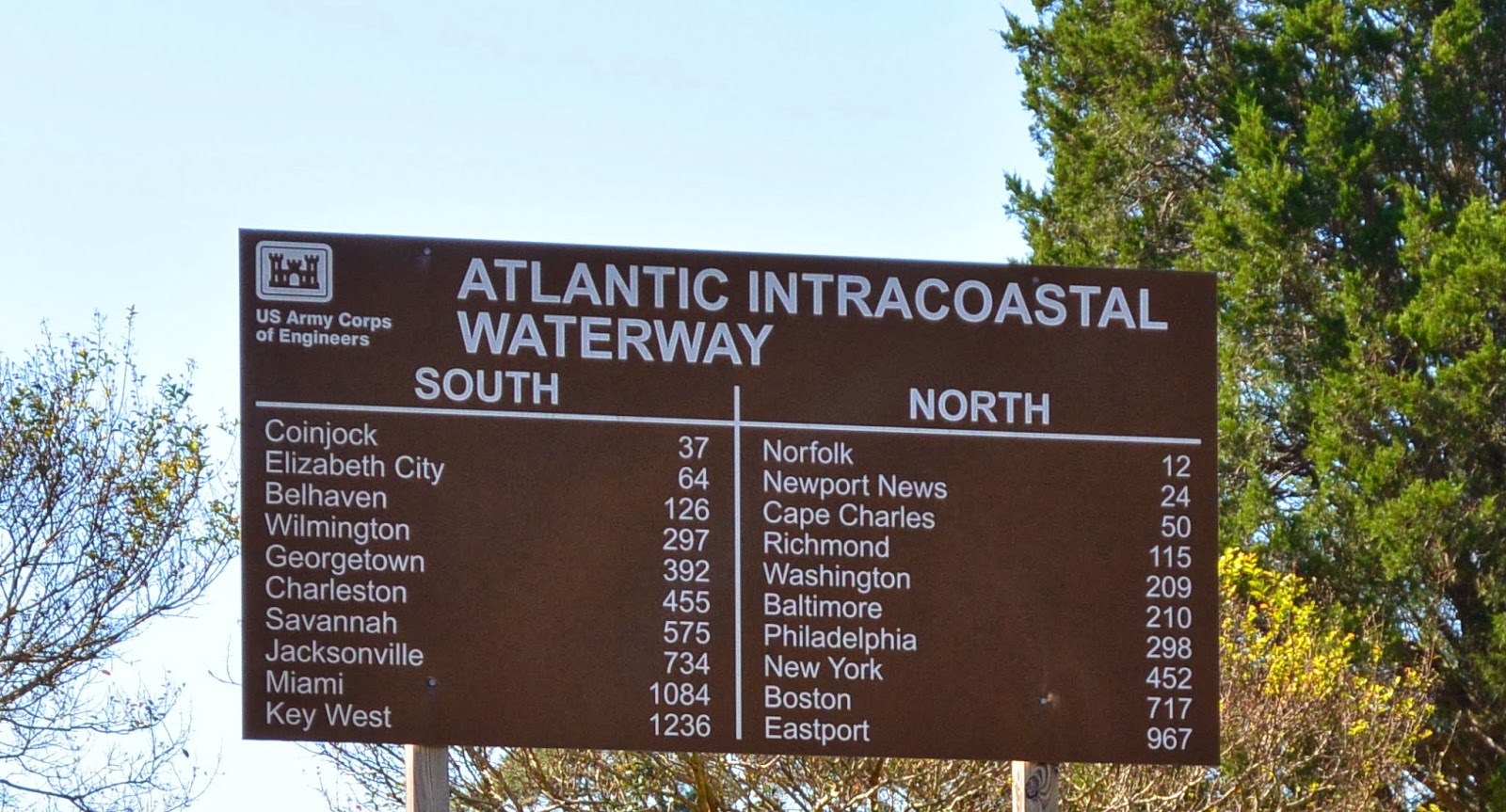 We saw this sign a while back announcing that Miami was 1084 miles away. Boca Raton is not that far north of Miami. Since entering the ICW, we’ve been making 50-65 miles per day. We have less than three weeks until the wedding November 15 weekend, so it looks like we’ll make it in time but it’s going to be close. Not much time for sight seeing along the way. We’ll have to do that on the way back north.