As I write this, everything I can think of is functioning properly on Eventyr. This has to be a first! Our outboard on the dinghy runs without dying and starts relatively consistently. Our diesel engine is running beautifully and not leaking oil or diesel. Our depth indicator, which wasn't working yesterday, sprang back to life after I did some re-wiring and tinkering. The sails are in good shape, as are all our lines. I really can't think of anything that's broken, which is like a Christmas miracle. Let's see how long that lasts :-)

Since our last post from beautiful Treasure Cay, we spent time on Great Guana Cay and are now in Hope Town on Elbow Cay. Like I said in our last post, Great Guana Cay was going to be a time for partying…and partying we did. I even broke out Dad's surfboard for a tranquil day of surfing and enjoying the beach (even if the waves were so small they were almost unrideable). The Bahamas are treating us well. 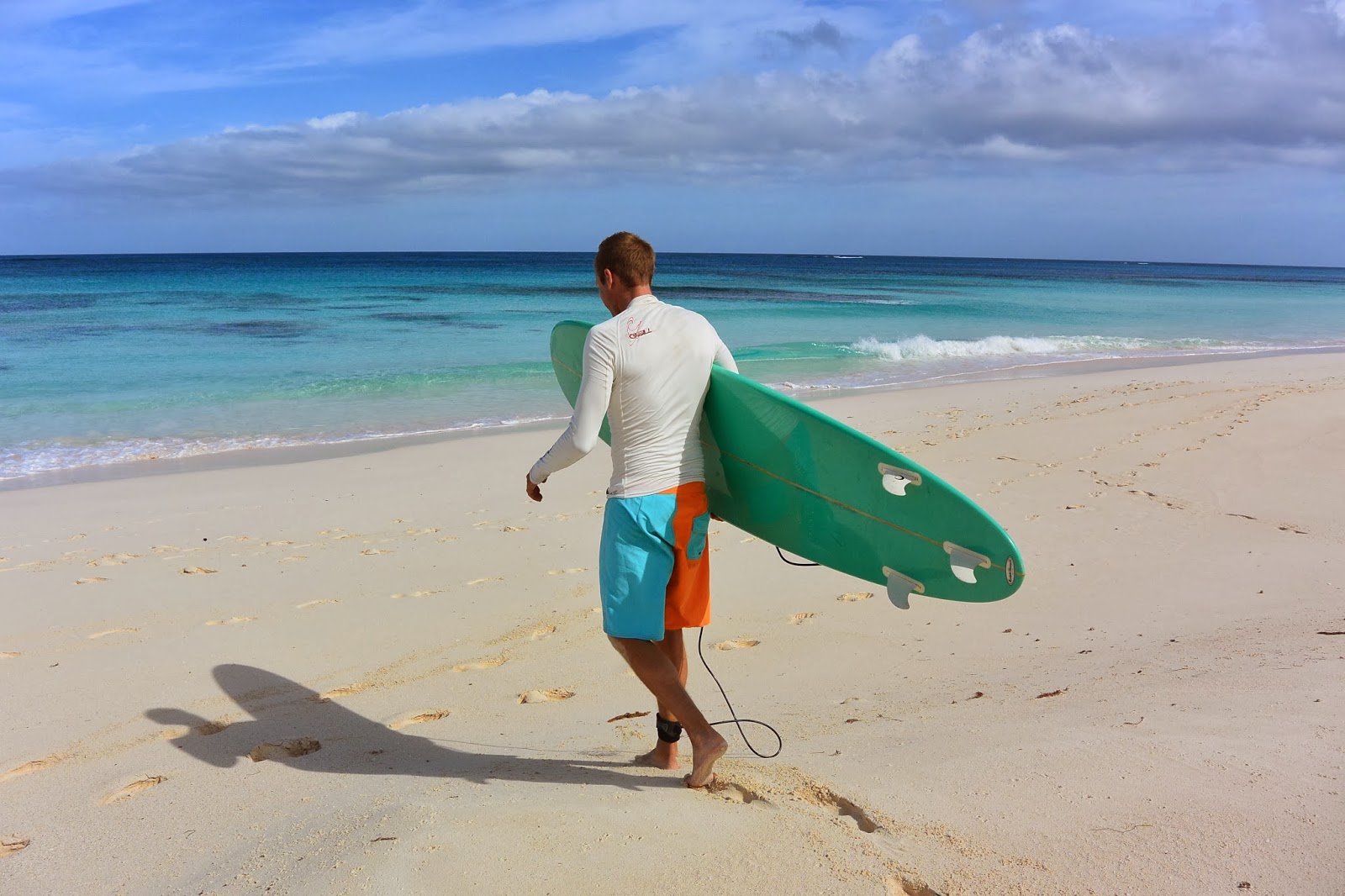 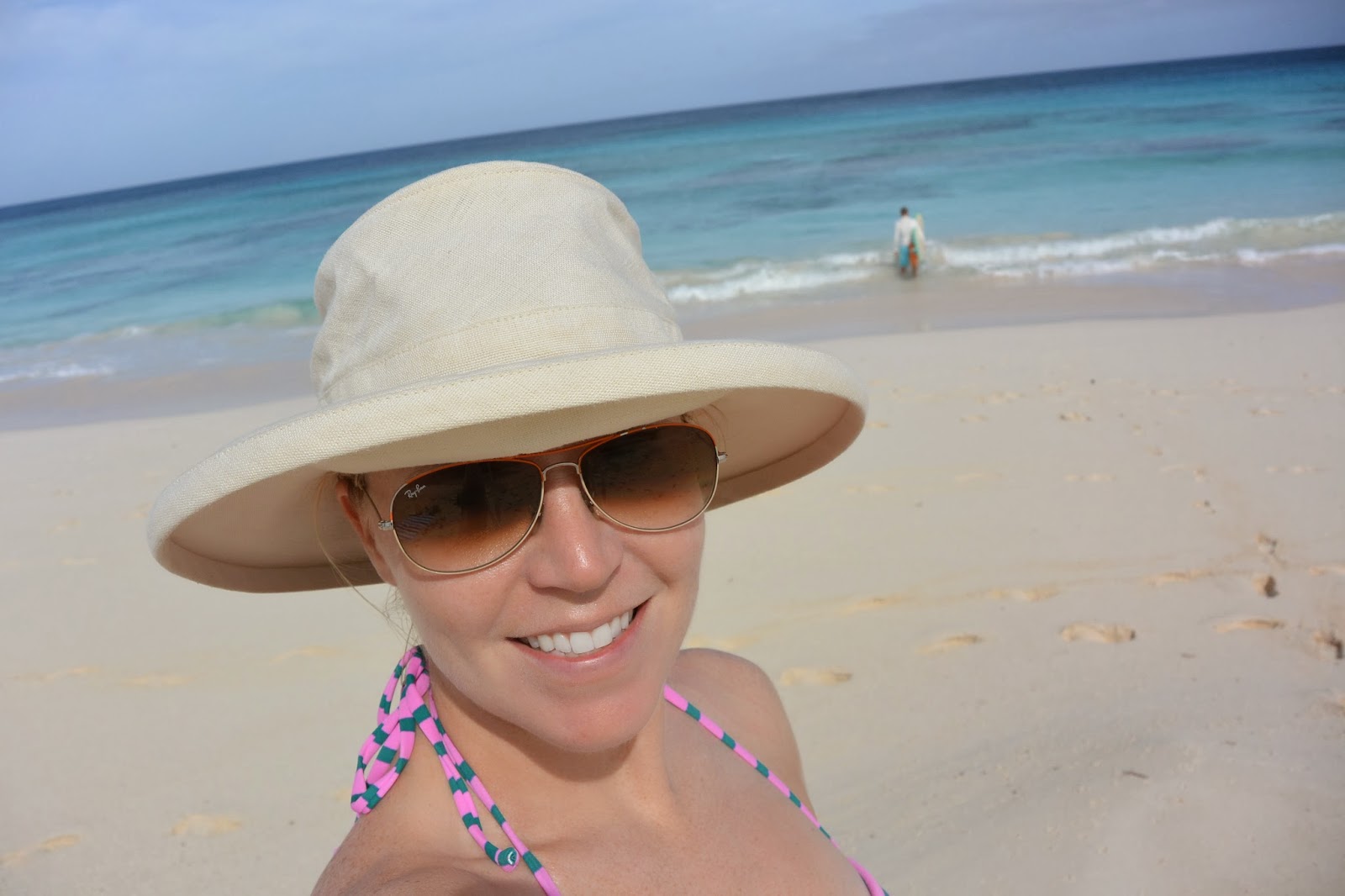 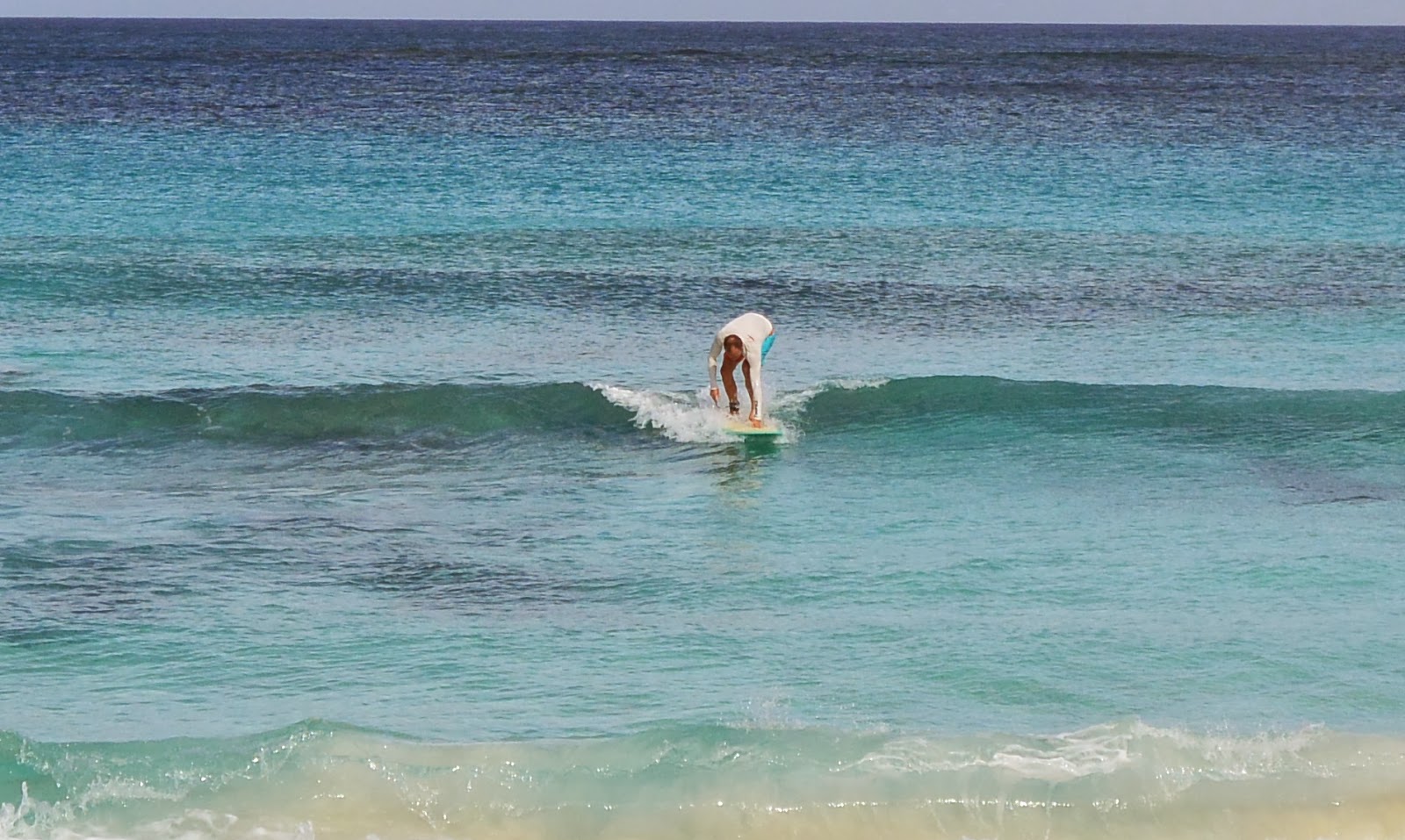 Great Guana Cay is famous for Nippers, a bar recommended to us before we left the states and we continued to hear about during our travels. Even though it's pretty slow around here for tourists right now, we were able to meet many people ready to cut loose for the weekend. 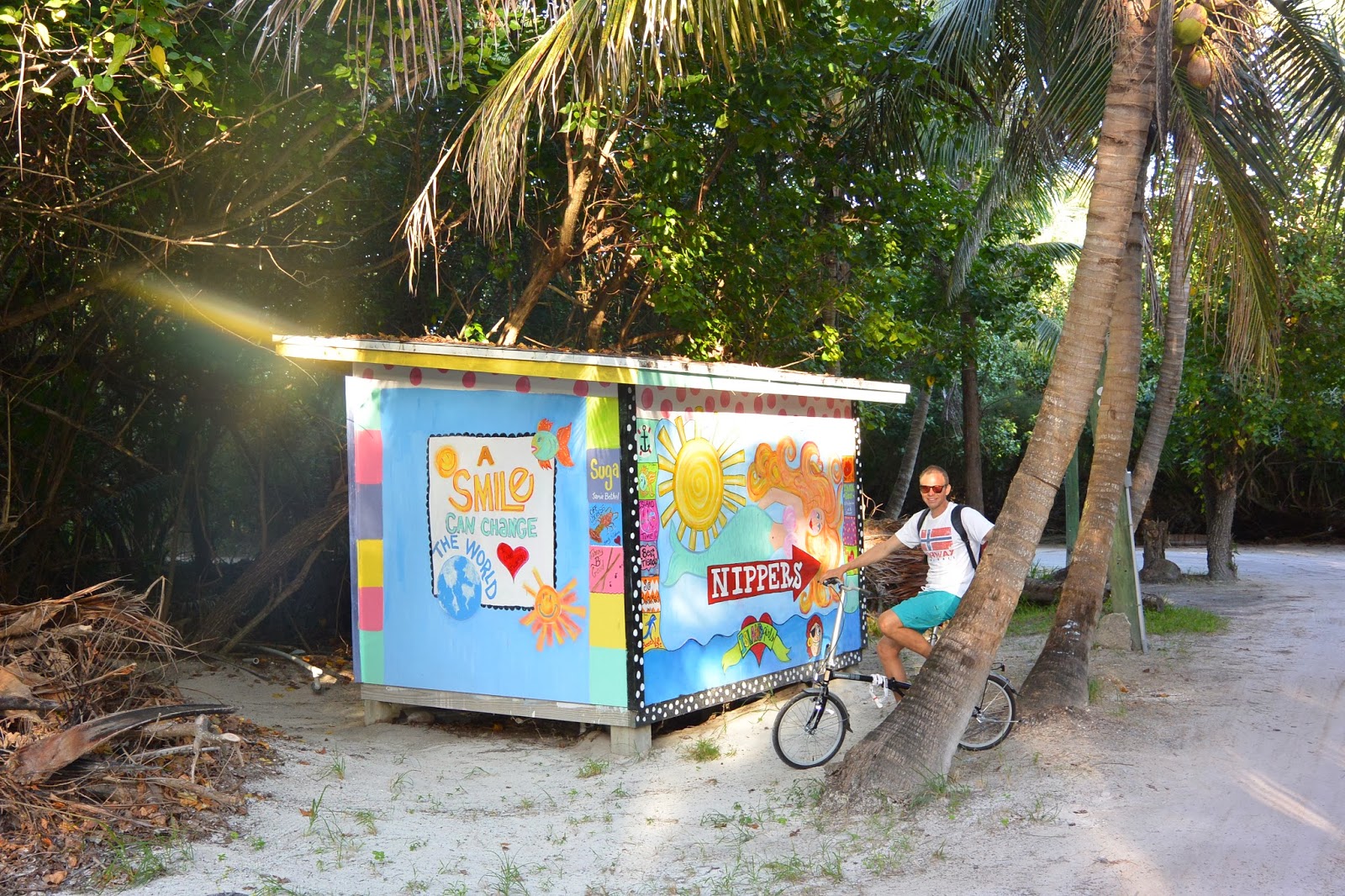 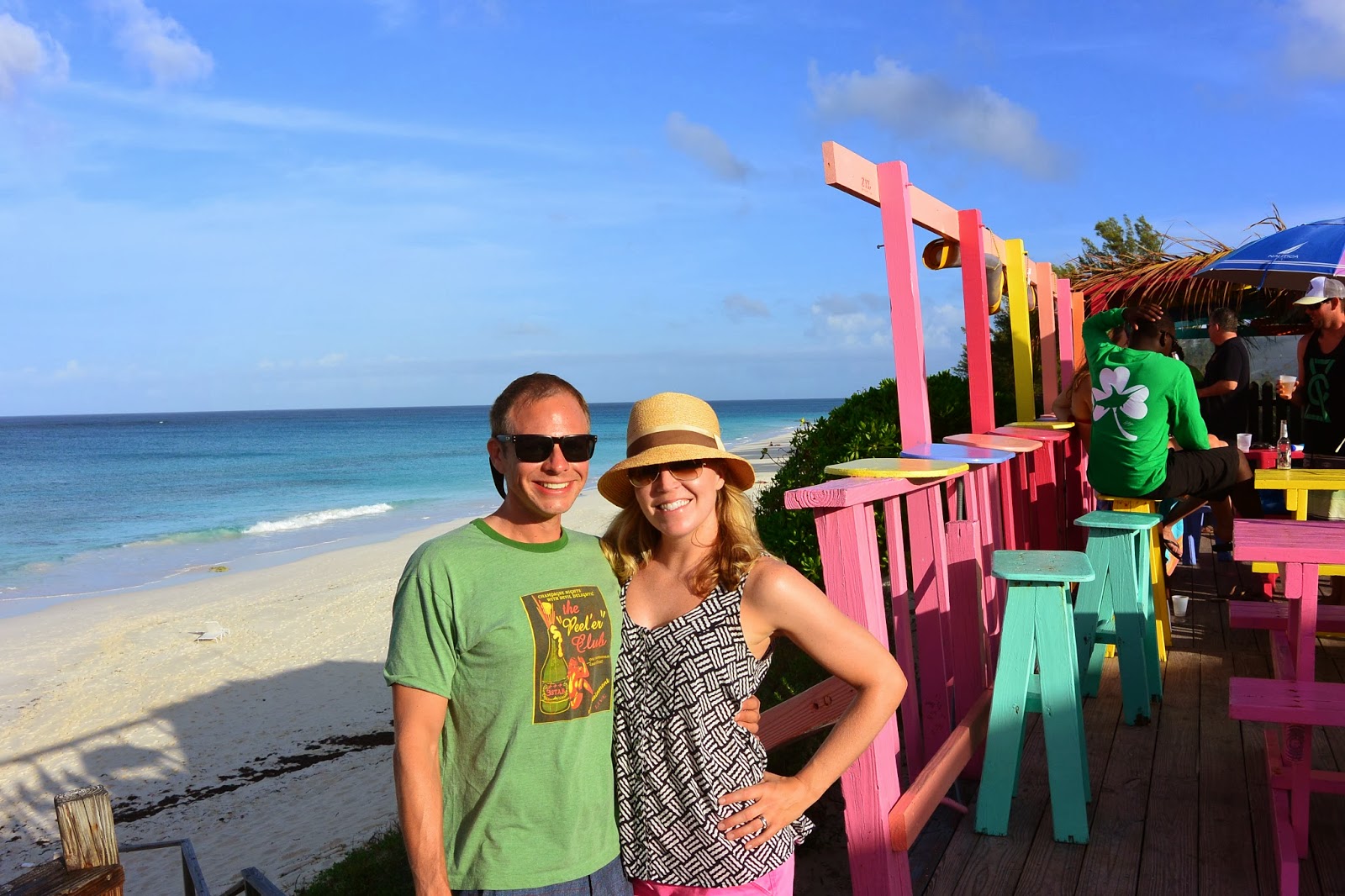 In addition to Nippers, and another bar on the island, Grabbers, we spent a good amount of time at Kidd's Cove Bar. This particular bar was run and frequented by a bunch of 20 and 30 something Bahamians and we immediately made friends. We even bartered with them, trading two gallons of gas for several cocktails (they call their specialty drink the "Gripper,"as a comedic play on the "Nipper" and the "Grabber," their nearby neighbors/competitors). Their generator was out of gas and the only fuel station on the island was closed. If we didn't dinghy back to our boat for gas, they wouldn't have been able to stay open for the night!

Friday, after a raucous day at Nippers, then Kidd's Cove, we invited one of the "Kidds," John, along with a couple we met at Kidd's from Denmark who were vacationing on Great Guana Cay, back to Eventyr for cocktails. Pia speaks Norwegian and confirmed that our boat name is authentic and she was excited to come aboard. We enjoyed Dana's dark and stormies while John drank vodka. Soon enough, we had a full dance party going on in the middle of the harbor. Dinghying them back to shore was exciting and the next day was rough for all of us. 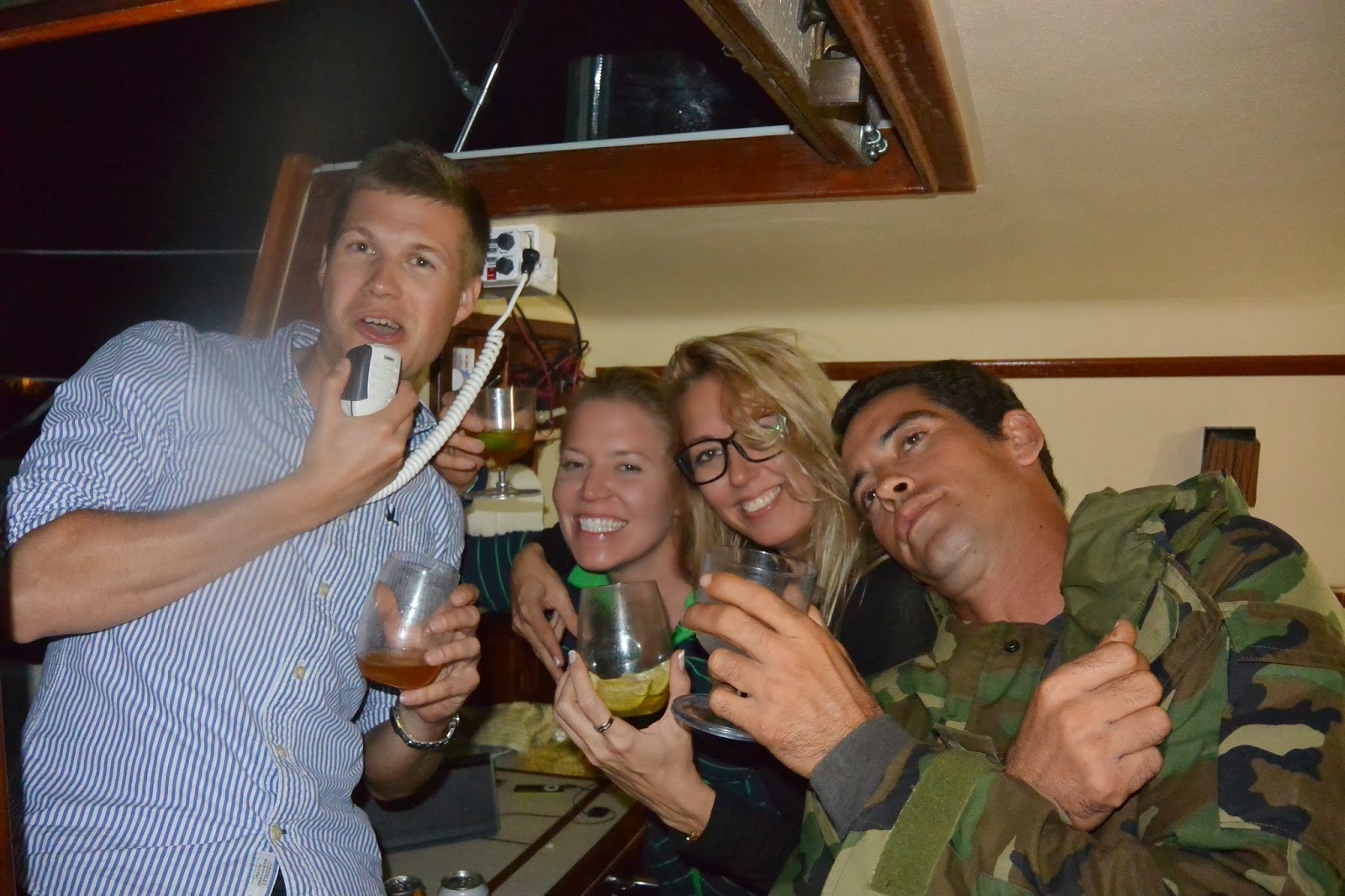 But, that's the life of the adventure, I guess. Every day is a new experience, from partying like it's 1999, to fixing things on the boat, to having a calm beautiful sail across the Sea of Abaco. That's exactly what we did yesterday. Dana and I left our mooring at Great Guana Cay and had a great two-hour sail to Hopetown, another quaint little town with pastel colored houses and everyone driving golf carts to get around the island. They have a picturesque striped lighthouse we climbed for amazing views of the island and surrounding seas. 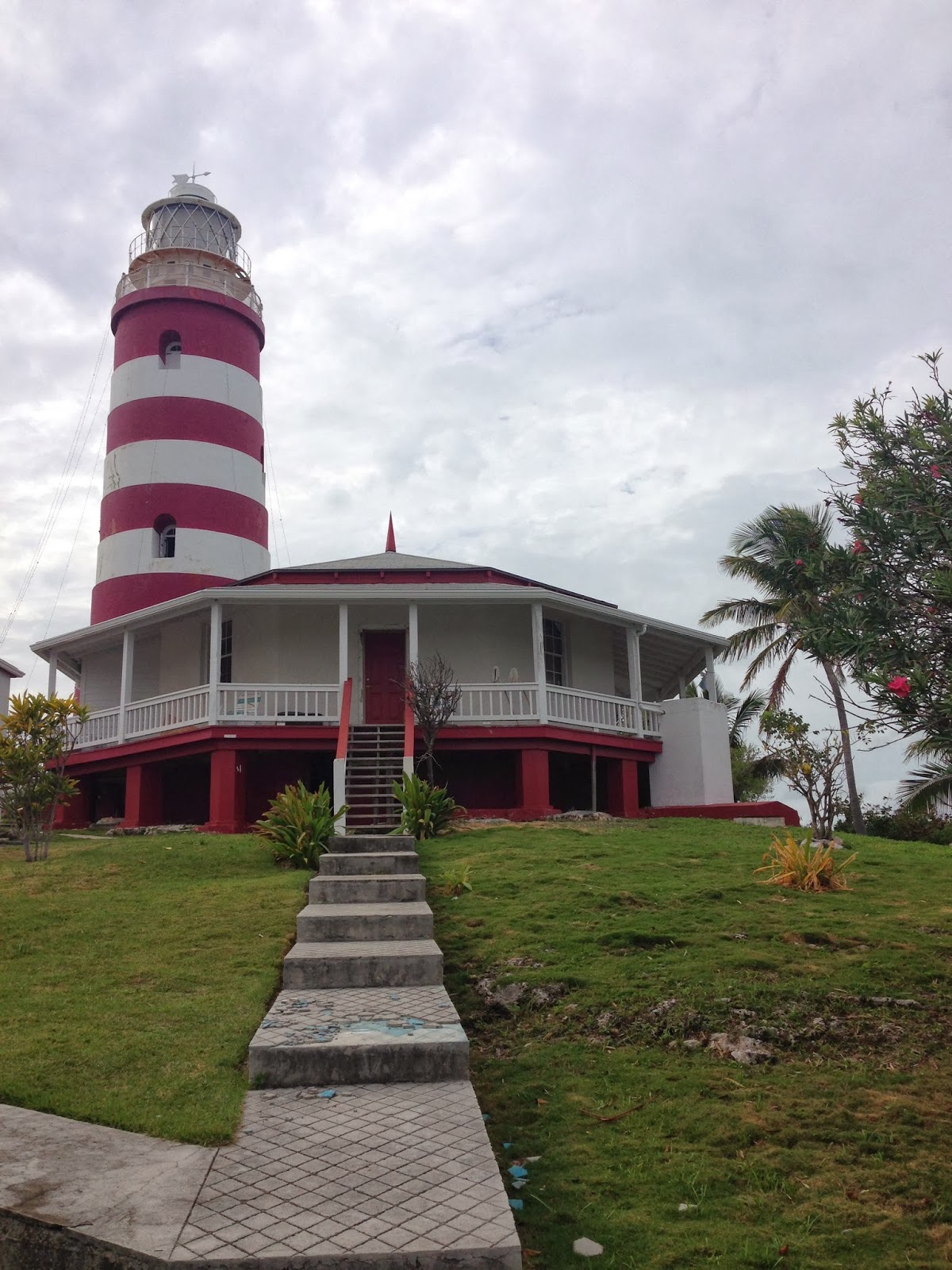 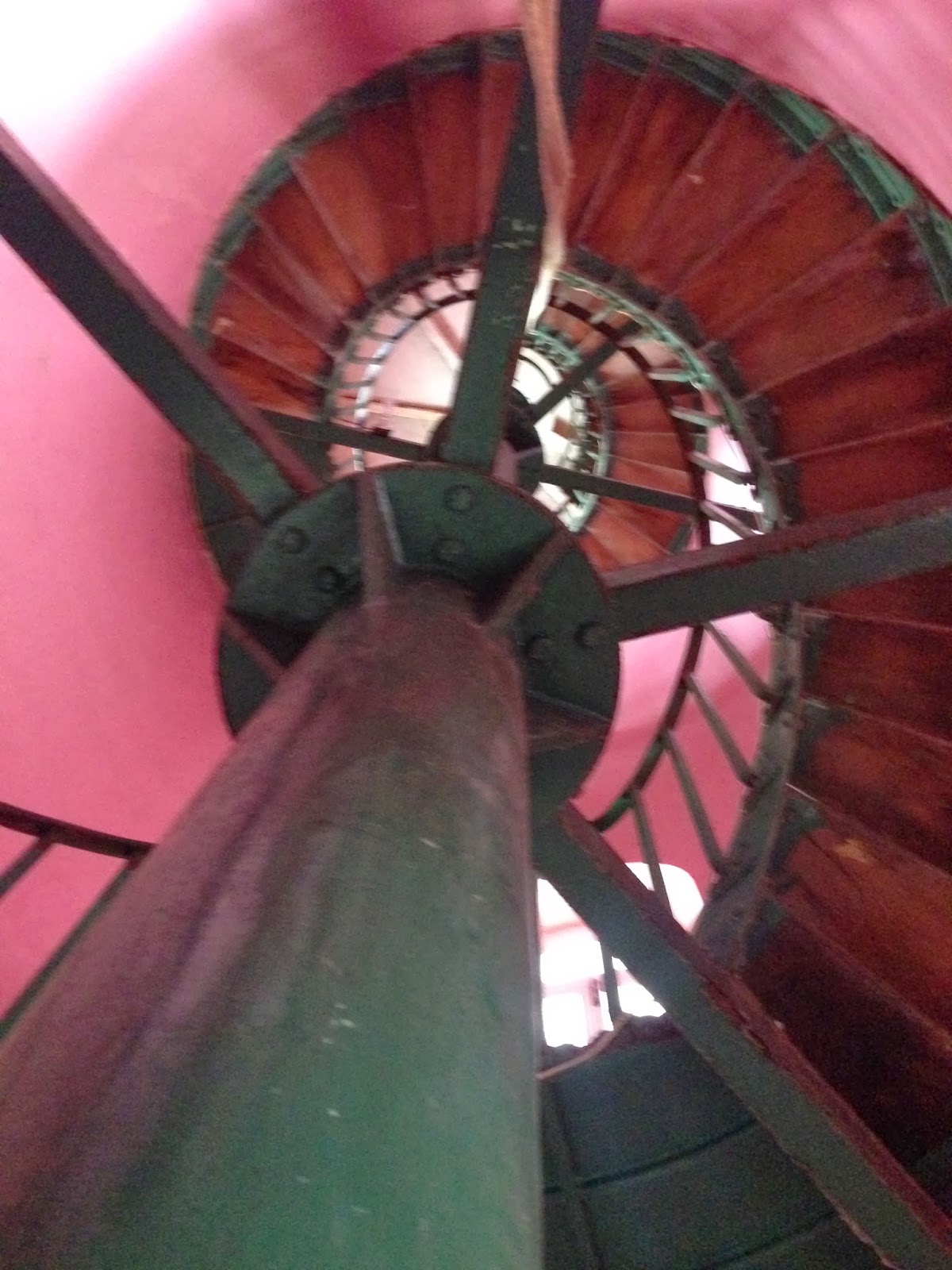 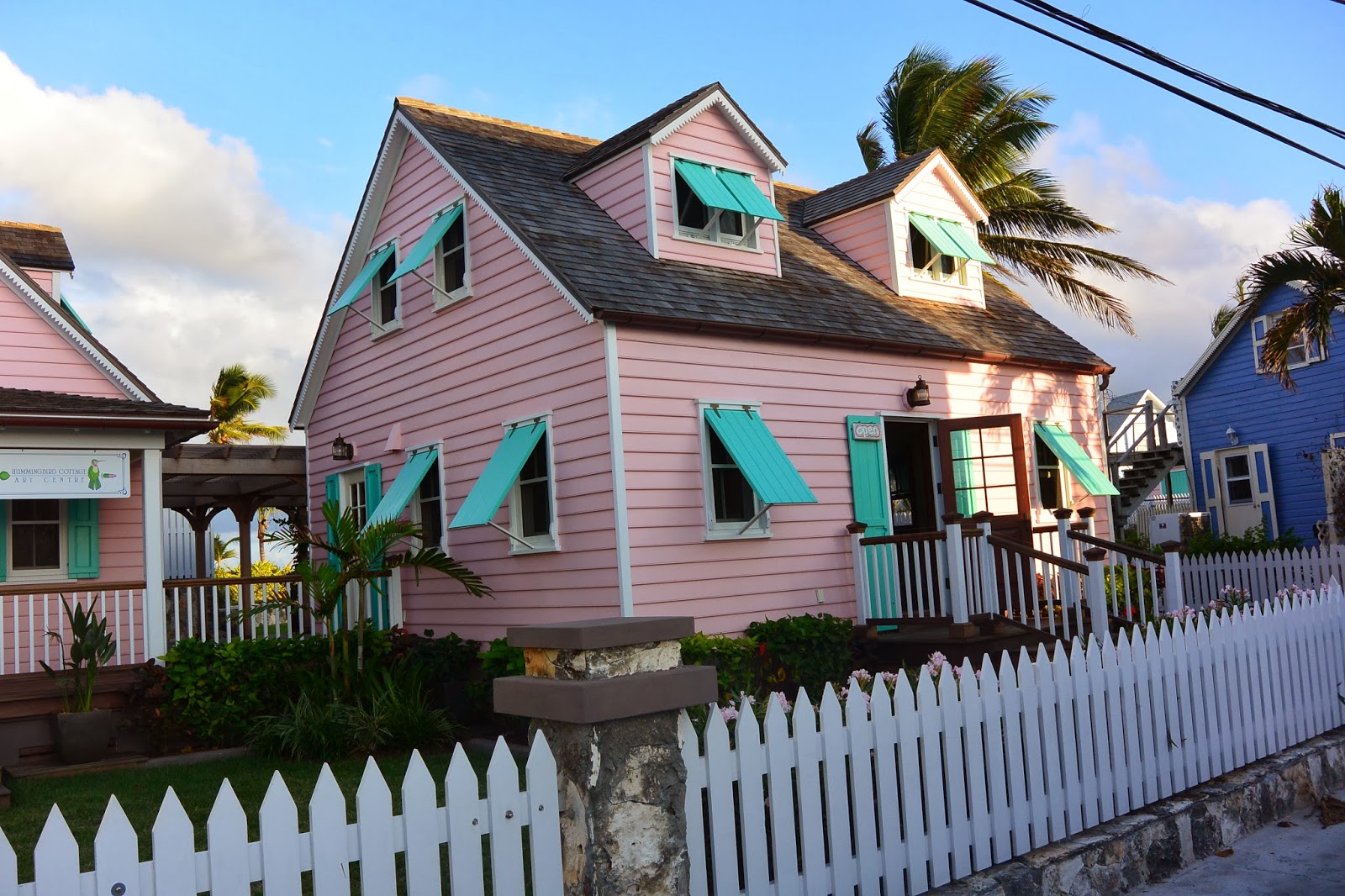 We continue to meet fantastic folks, whether they're other cruisers like us or tourists visiting by plane and then ferry. One concern recently, is that we've met many a naysayer who scoff at our adventure plan and warn there's no way we can finish in the time allotted. I say, where there's a will, there's a way, and Dana and I are committed individuals. When we set goals, we're willing to go to the extreme to achieve them. We can't be too strict on our timeline, or else things get dangerous. Pushing your luck with weather because you're on a schedule is the set-up for many a misadventure in sailing. On the other hand, we find no need to sit in the same place for weeks taking naps and setting into sedentary, albeit pleasant, routines. 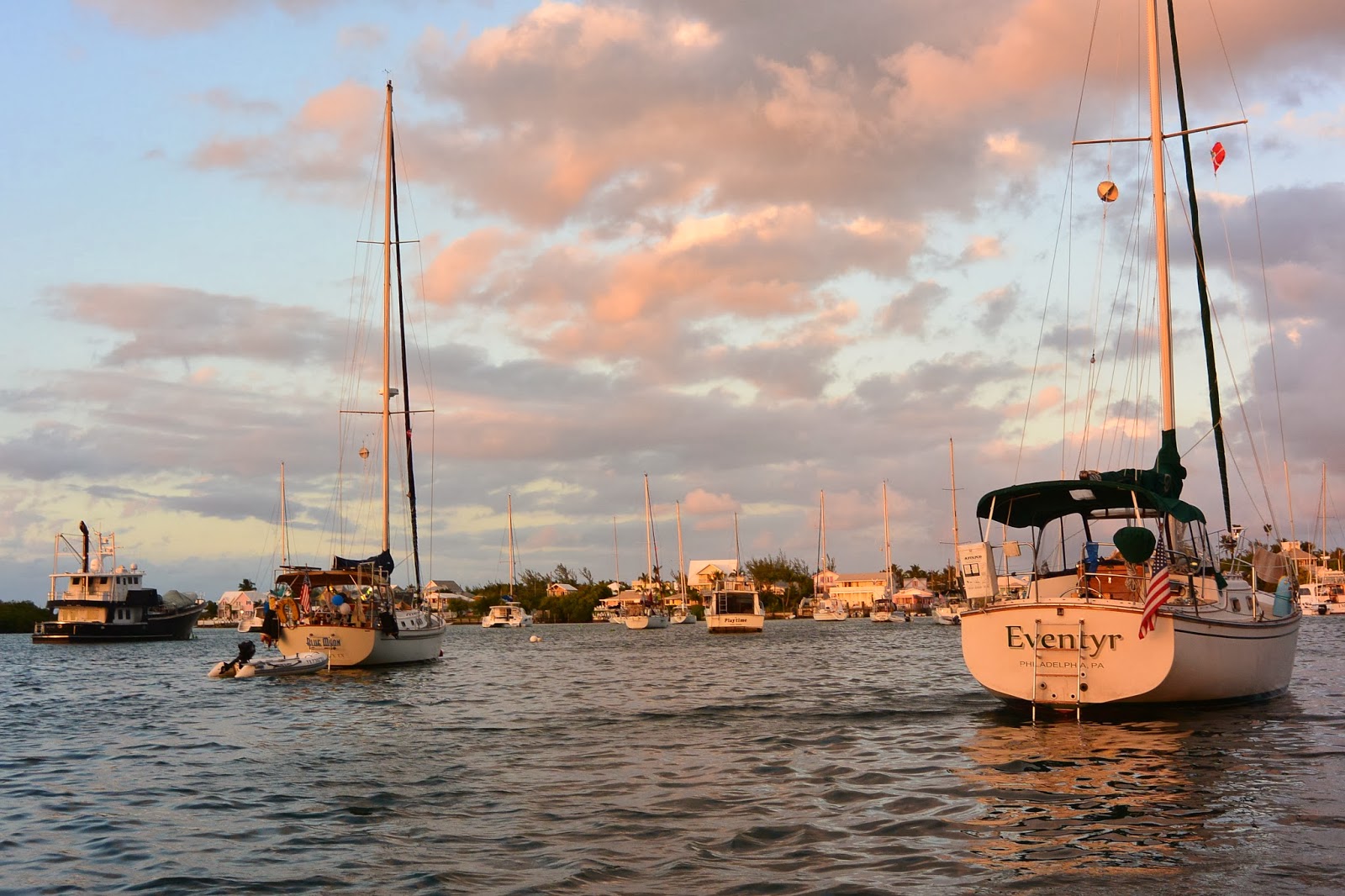 So tomorrow we'll push on. Just a couple miles to Tahiti Beach, where I'll be able to walk a short distance to surf (if it's up, which it should be). Then, on to a staging anchorage where we'll ready Eventyr for another open ocean crossing of about 50 miles down to Eleuthera Island and the next segment of the Bahamas. This will be our first open ocean sail just the two of us, so wish us luck. I promise we won't be partying the night before that trip!
Posted by Unknown at 7:20 PM