Most beautiful beach yet and more engine repairs 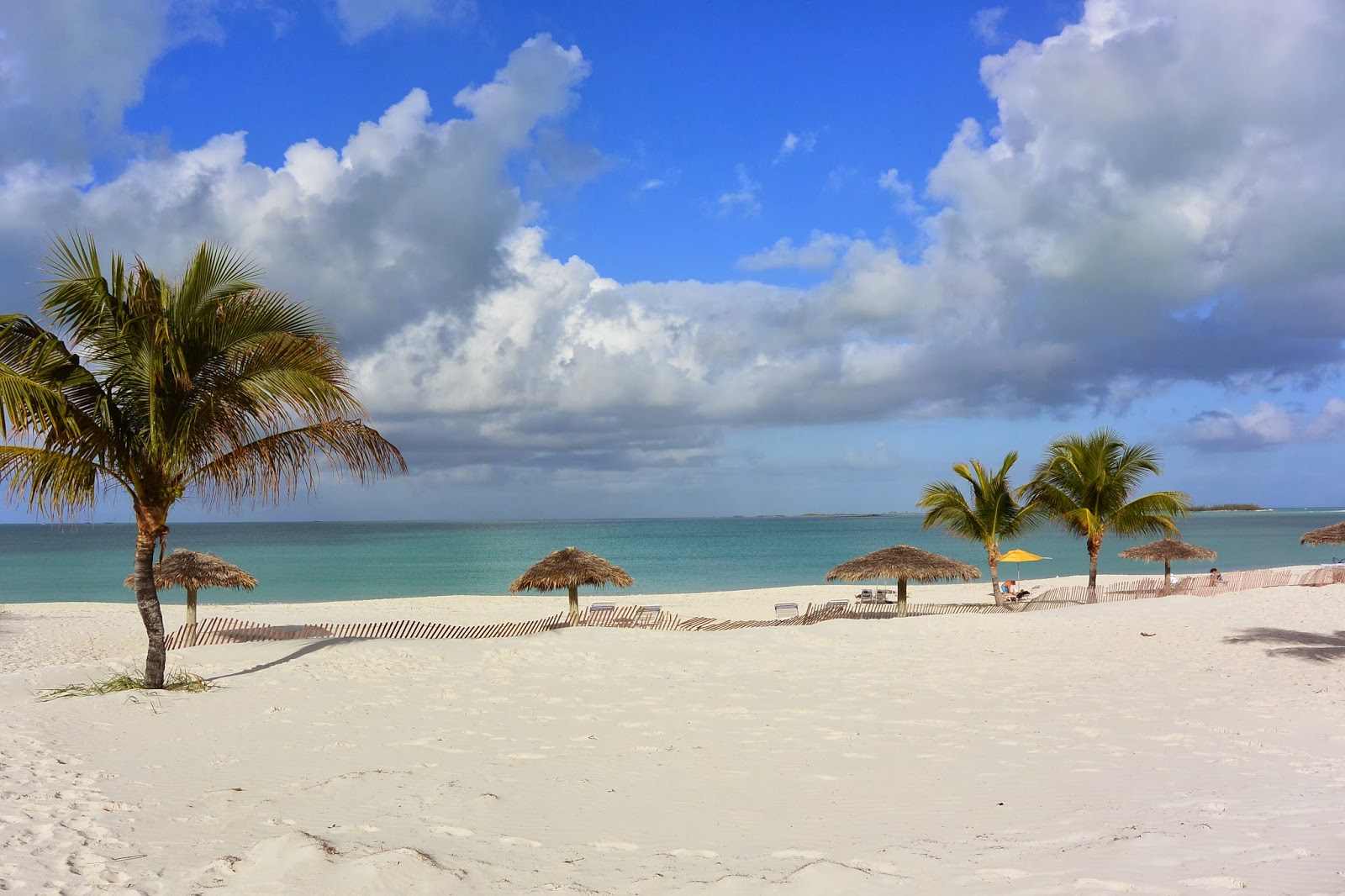 We sailed from Green Turtle Cay to Treasure Cay a couple days ago, and the tall talk about the spectacular beach lived up to the hype. It being low season, we had the beach practically to ourselves! 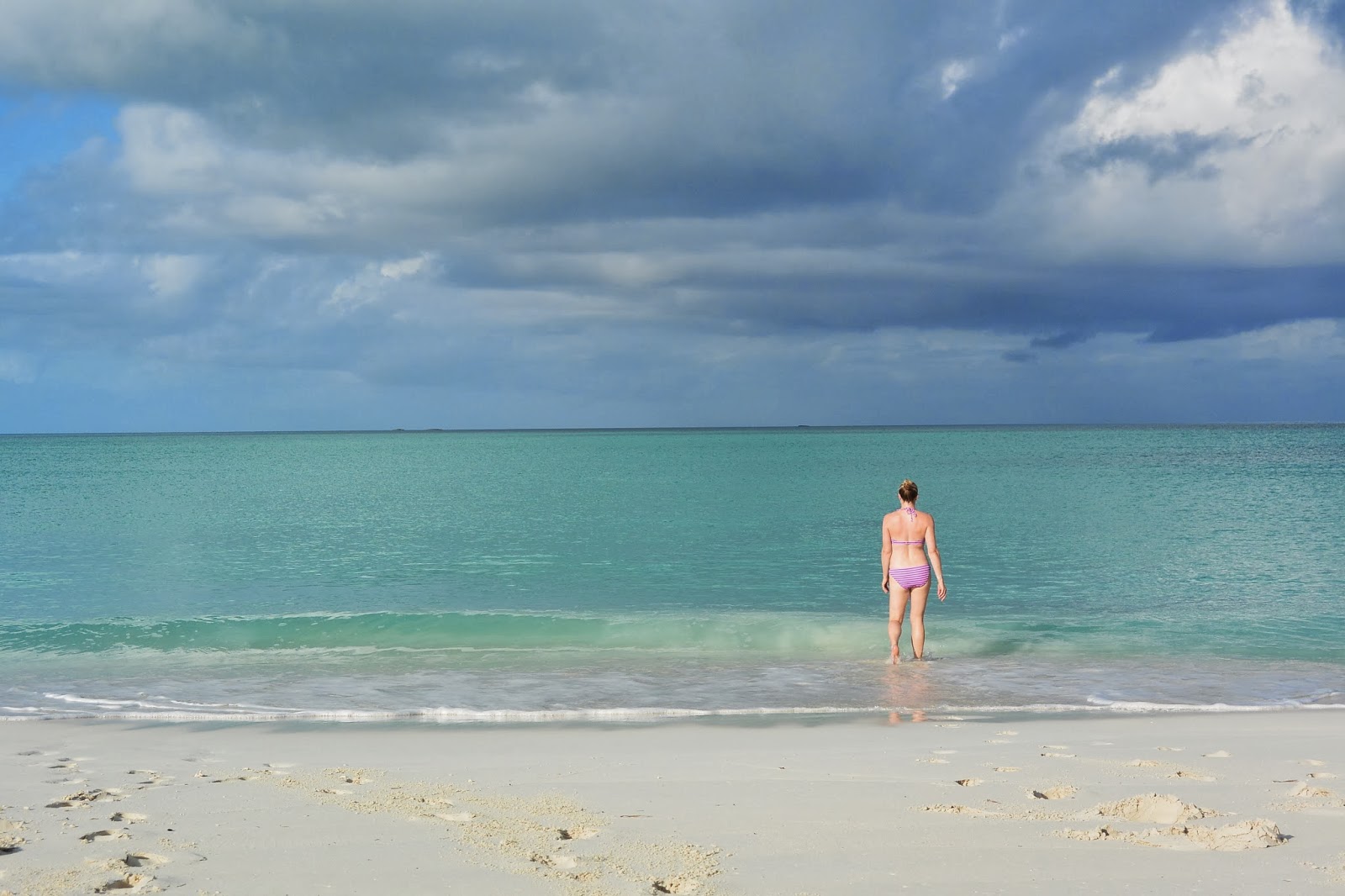 Today we planned to have a full beach day and chill out, but the best laid plans … As I may have mentioned, our engine has been leaking oil every time it runs. This began in the ICW and continues. We thought we solved the problem after paying a small fortune to a mechanic in Ft Lauderdale, but no such luck. By the time we got to the Bahamas, the area under the engine was again full of oil :-(

Well, last night we were having drinks with new friends Toni and Dave from Montana on their catamaran. When we told them of our leak, they immediately recommended a local guy they used for engine repairs in the past. Dana and I already made an appointment with a Yanmar (our engine brand) certified dealer a couple towns away (Marsh Harbor) for this upcoming Monday. However, that town was out of the way, and if we could get it fixed before that, we could skip the trip.

This morning we called Anthony about the problem and he promptly came over to the marina. The three of us dinghied out to our boat and he took a look at the leak. Within 30 seconds, he identified the problem and said he could probably get the part today. Coincidentally, the part was in Marsh Harbor. Anthony said, "You want to go for a ride?" We excitedly agreed and he drove us to the town. Anthony is incredibly friendly and hospitable, as are most Bahamians, and in addition to bringing us to the service department of the Yanmar dealer where we purchased the part for $17 and cancelled our upcoming appointment, he gave us a tour of the town of Marsh Harbor. He works as a charter captain at a charter boat company (in addition to being a mechanic) and he brought us on some of their huge sailboats (talk about sailboat envy) available for charter!

The friendliness of the people seems to be story of the trip so far. Back on Green Turtle Cay we were having a Goombay Smash (rum punch drink) at the bar that invented the concoction, Miss Emily's Blue Bee Bar, and chatting with the owner. We were low on cash, as the island doesn't have an ATM, and they didn't take cards. We figured we'd have one drink with our remaining cash and then head to a restaurant that took cards. Meanwhile, a local lobsterman/fisherman, Matt, struck up a conversation. He gave me some tips on finding lobsters and joked with us on various topics.

When we told him we were leaving to go somewhere to get dinner that took credit cards, he would hear none of it. He exclaimed "Nonsense, I'm getting you dinner. Wait right here." We protested but he ordered two more drinks for us and told us to stay put. By the way, his drink of choice was creme de menthe with sweetened condensed milk. Soon, the chef of the restaurant who was off for the night came in with fresh caught lobsters, to prepare dinner just for us (as we were the only ones in the bar). The chef slipped away to the kitchen and returned with a delicious lobster dish over rice. The chef, Matt, Dana, and I all sat down to eat Matt seemed incredibly happy to be treating us to dinner. After eating we thanked him and headed back to Eventyr. We could hardly believe what just happened! I guess it is better in the Bahamas ;-) 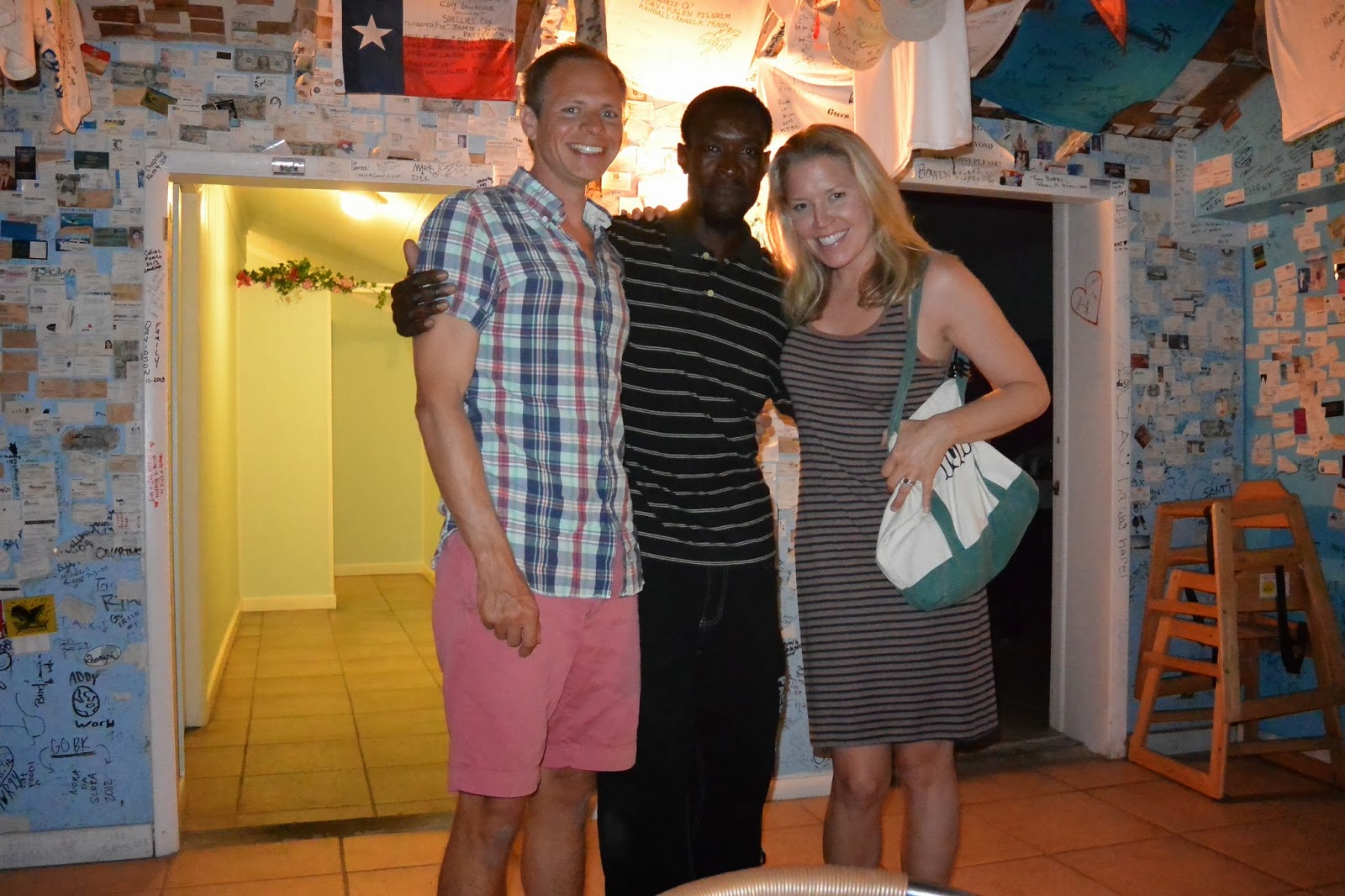 Here in Treasure Cay, my ability to provide for dinner seems to be lacking. All I catch are bizarre fish that I can't even identify! 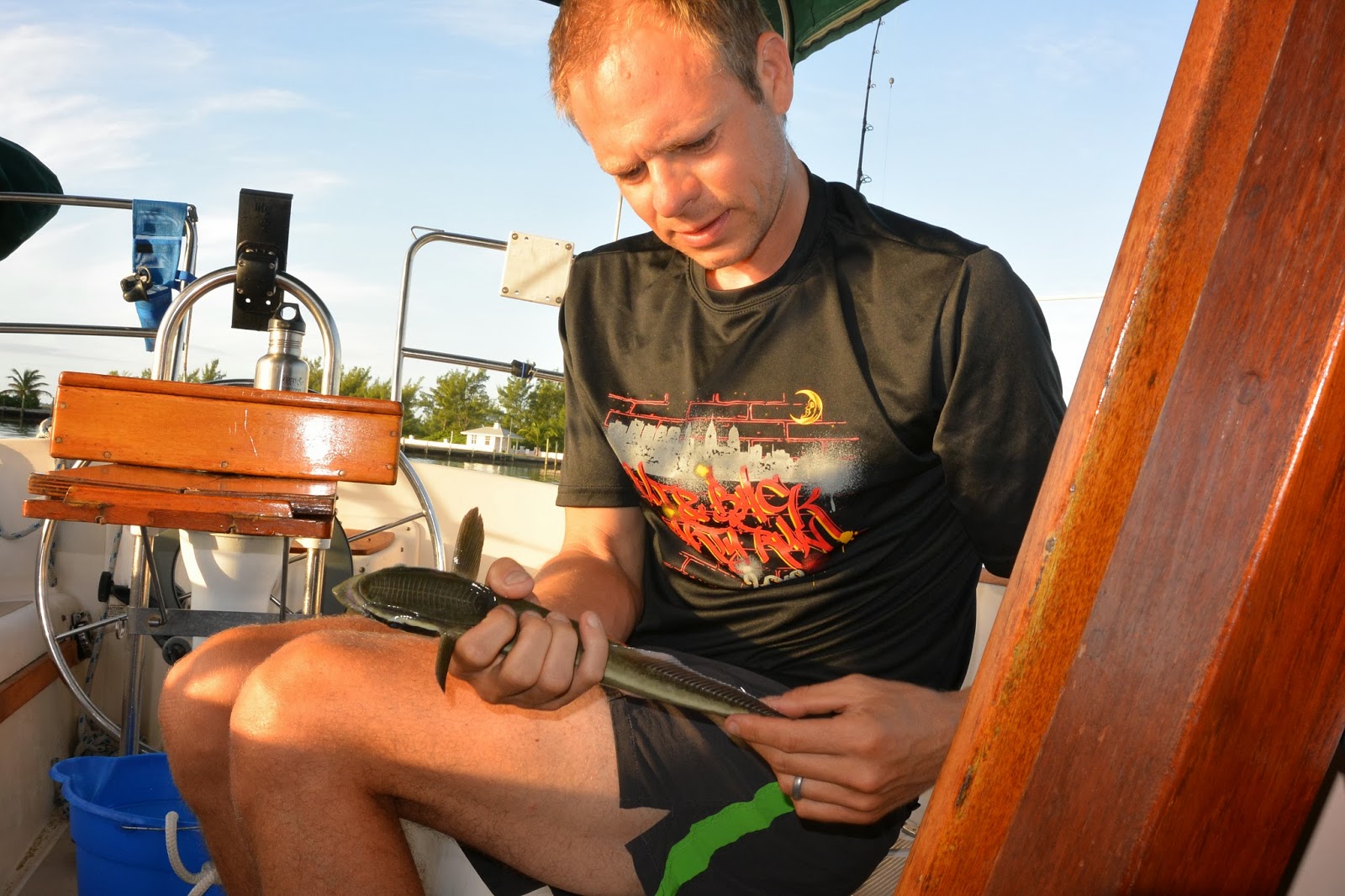 Lucky for us, locals frequently walk around selling lobster they just caught for cheap, so we are not lacking for great home cooked meals. 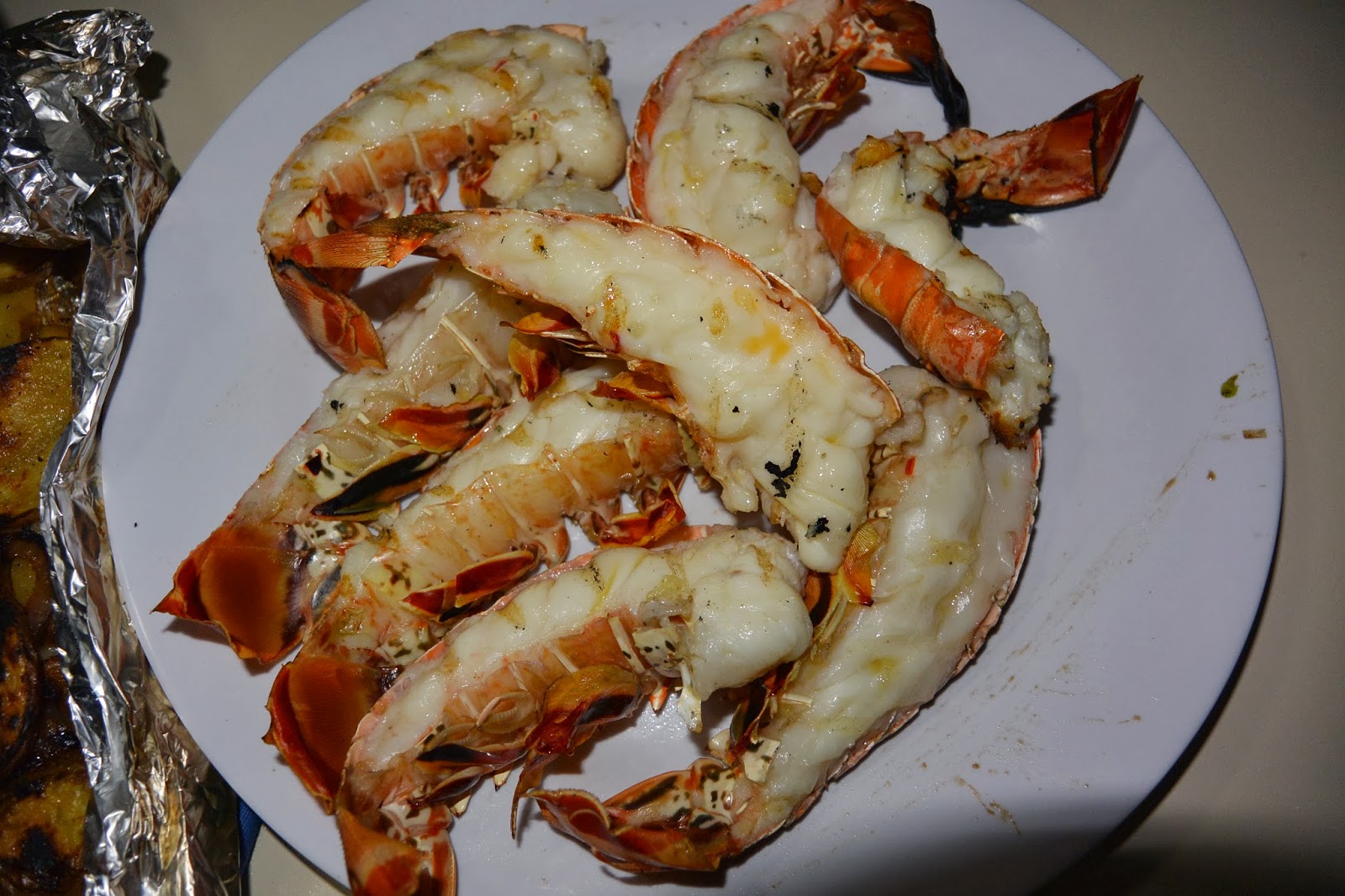 Next on to Nippers Bar on Great Guana Cay for some weekend craziness. Hopefully there's something going on, since it's off season. Everything seems a little like a ghost town around here.
Posted by Unknown at 2:39 PM