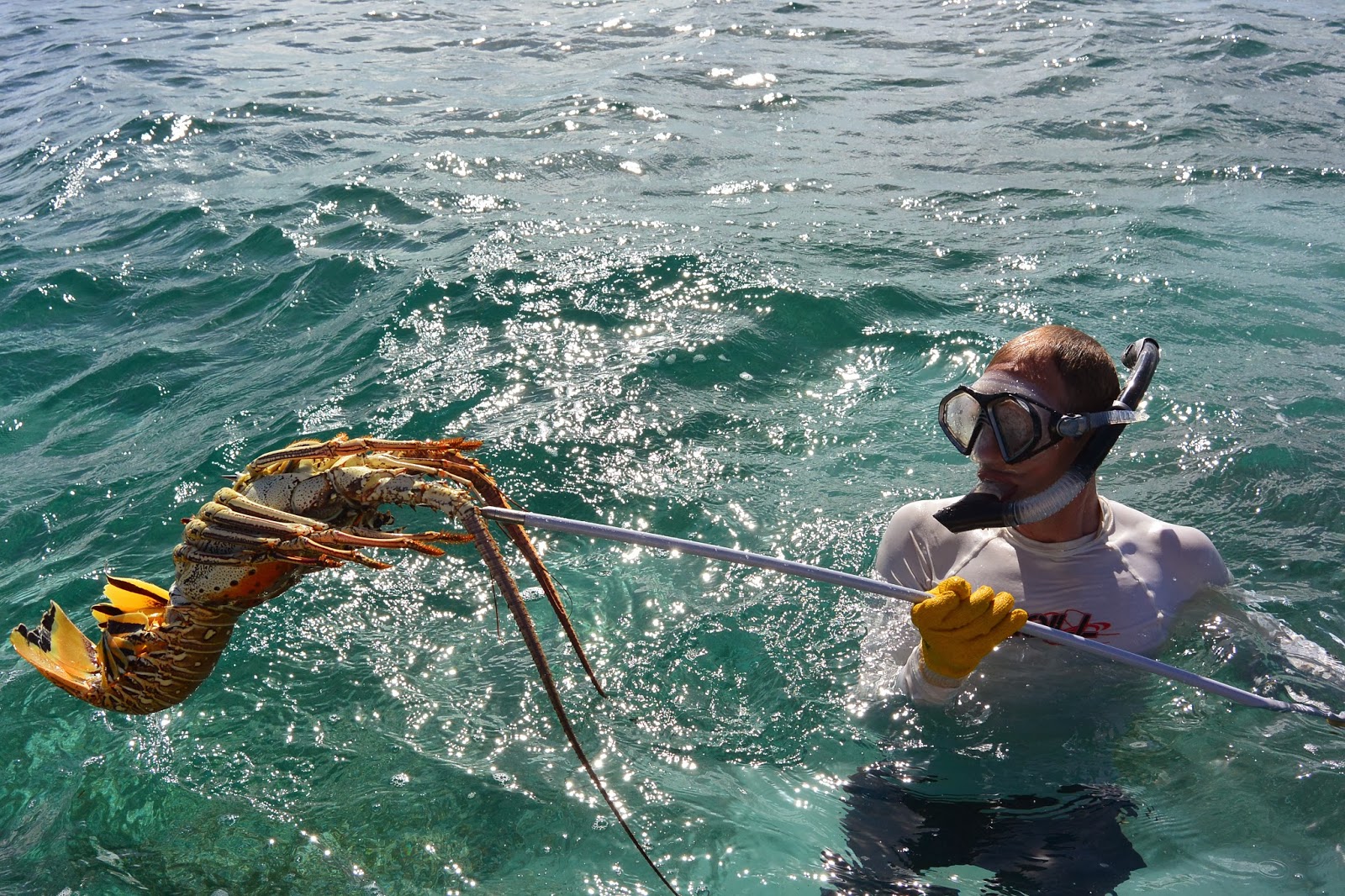 Dana and I did it! Our first open-ocean crossing just the two of us.

Wednesday started out like most days in paradise. We went for a run, stopped at the local grocery store for a few items and were deciding whether it would be a beach day, boat chores, or maybe I would hoof it to the other end of the island for some surfing. We were in Hope Town on Elbow Cay. Our plan was to spend some time in Hope Town Harbor, then anchor off of picturesque Tahiti beach. On Thursday, we would head down to Little Harbor and the famed sand floor beach bar, Pete’s Pub. On Saturday we would make the crossing down to Eleuthera Island.

However, the weather had different plans. Dinghying back to Eventy, we spotted a catamaran we recognized from Great Guana Cay, Sojourner. Rick waved us over and we came aboard. He wanted to show us all the websites he uses to track the weather. We spent close to an hour scouring the Internet for weather info from his various trusted sites for wind, waves, sea states, etc. The upshot was that if we didn’t leave the next day for Eleuthera (the next major stop on our trip), the winds wouldn’t be right again until Christmas Eve.

This totally screwed up our plans, but as we need to keep rambling, we decided to leave Hope Town Harbor and head directly to Little Harbor right then. We had a pleasant three or four-hour sail and got to Little Harbor by sunset. To our chagrin, Pete’s was closed, not opening until the next day. We dinghied over to the dock anyway and ran into a party. Pete and some of the other locals from the small, off-the-grid hamlet were on the dock drinking rum and having a good time. They treated us to some rum and we got to meet practically the whole town. Turns out one of the residents, Brian, is from Connecticut and his daughter went to UConn. Dana and I walked up to his house later that night and we all watched the first half of the UConn/Stanford game. All his electricity comes from solar panels and generators, which is pretty cool. Sort of like living on a boat! 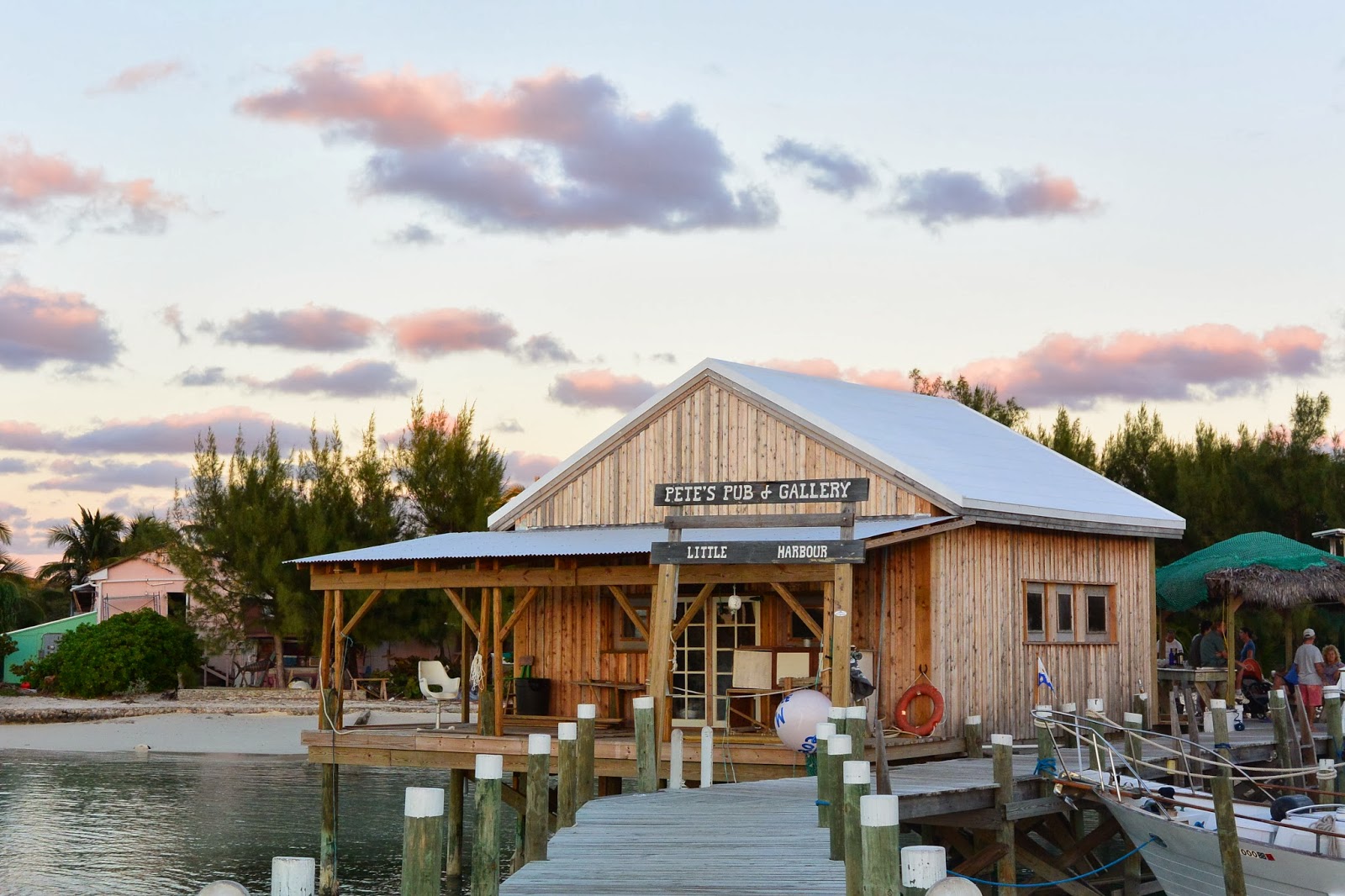 Thursday morning we were up at 5 am and left our mooring by 6 under a full moon headed out into the open Atlantic. The forecast predicted somewhat strong wind from the right direction, and rough seas. One website gauged the sea state with colors: green, yellow, red. Red is extremely rough and the wave heights that day were depicted by a shade of pink. We flew across the 50-mile Northeast Providence Channel on large choppy seas with strong wind on our beam. Despite flying very little in the way of sails, we cruised along near Eventyr’s top speed. Dana was not happy and it was definitely not pleasant for either of us. We basically endured a 10-hour bucking bronco ride. We finally got to our anchorage and were sound asleep by 7:45 pm. We didn’t wake until almost 12 hours later! 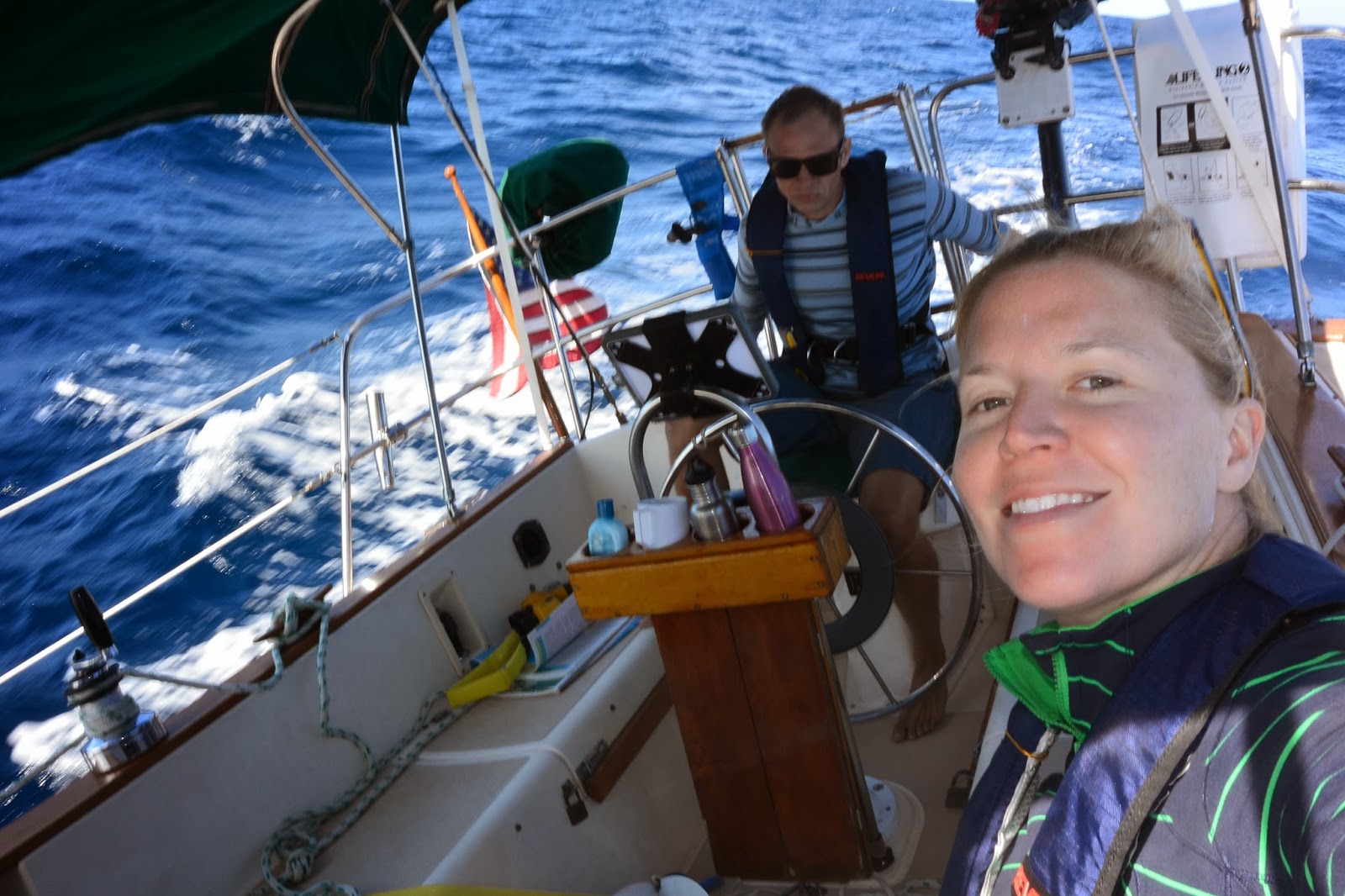 From there we headed to Spanish Wells, where we’re currently moored. This is another fun town with wonderful people and a beautiful pink sand beach that stretches for a mile-and-a-half. We’ve been partying with the locals at night and enjoying the beach by day. 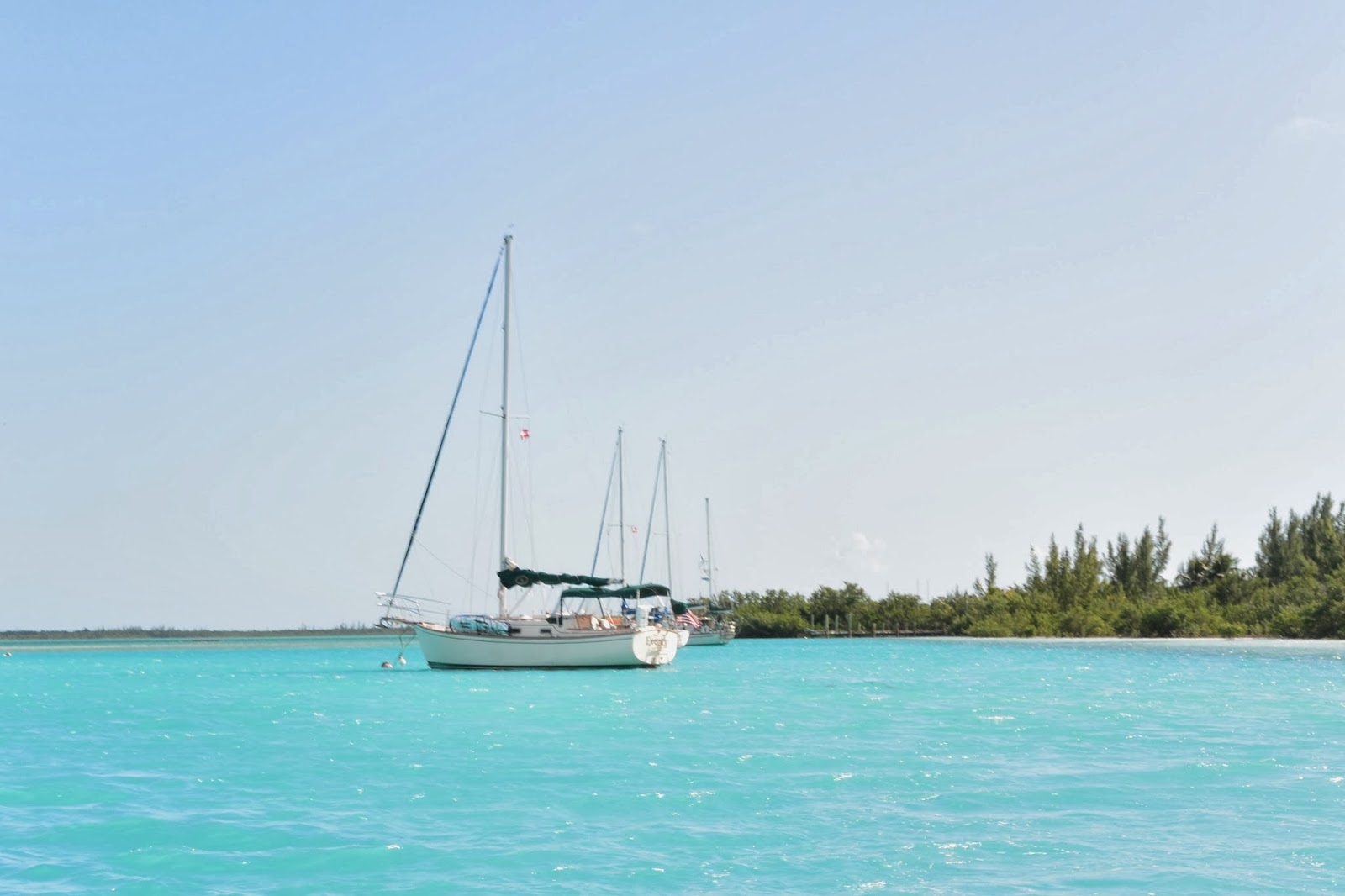 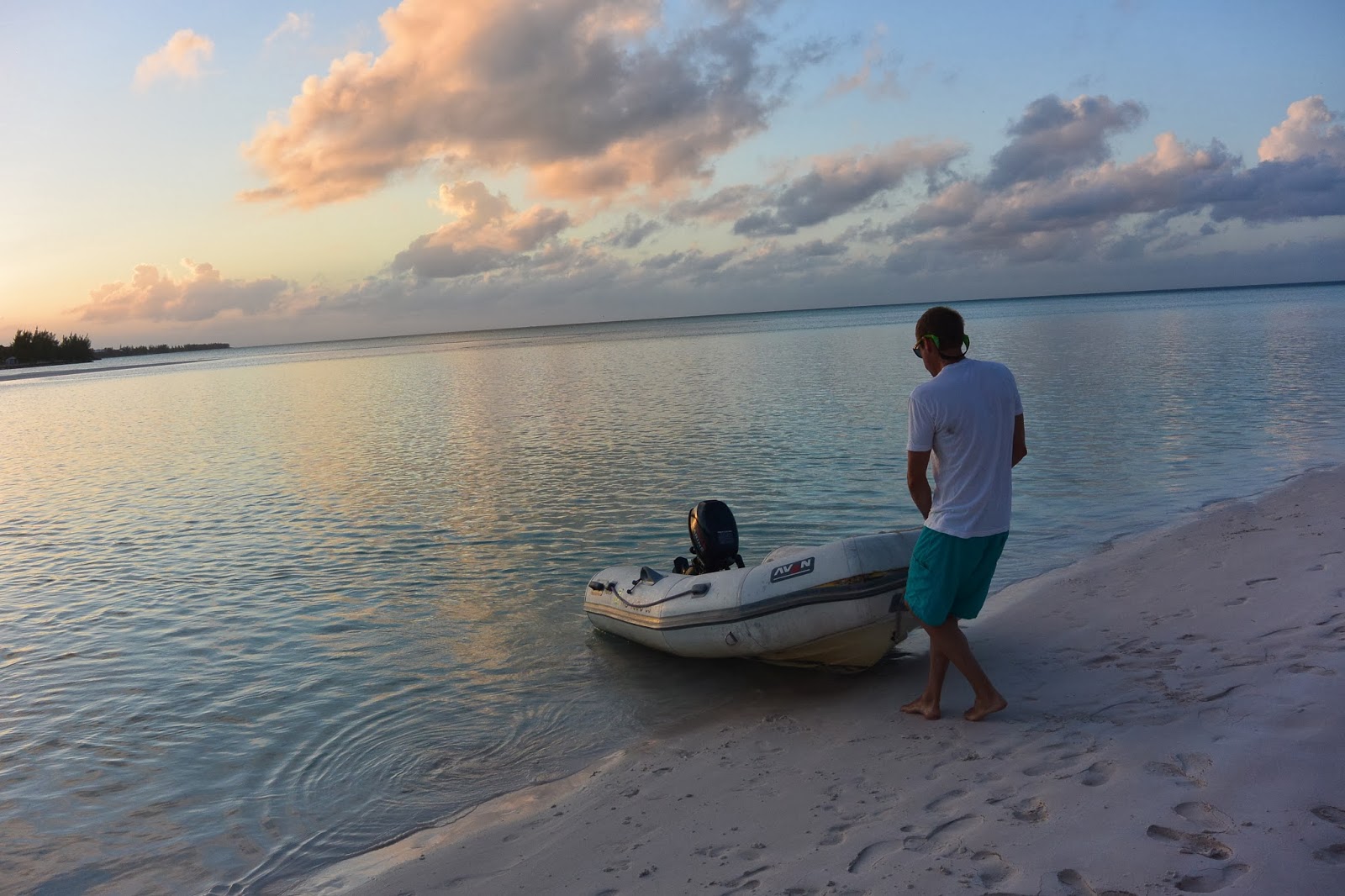 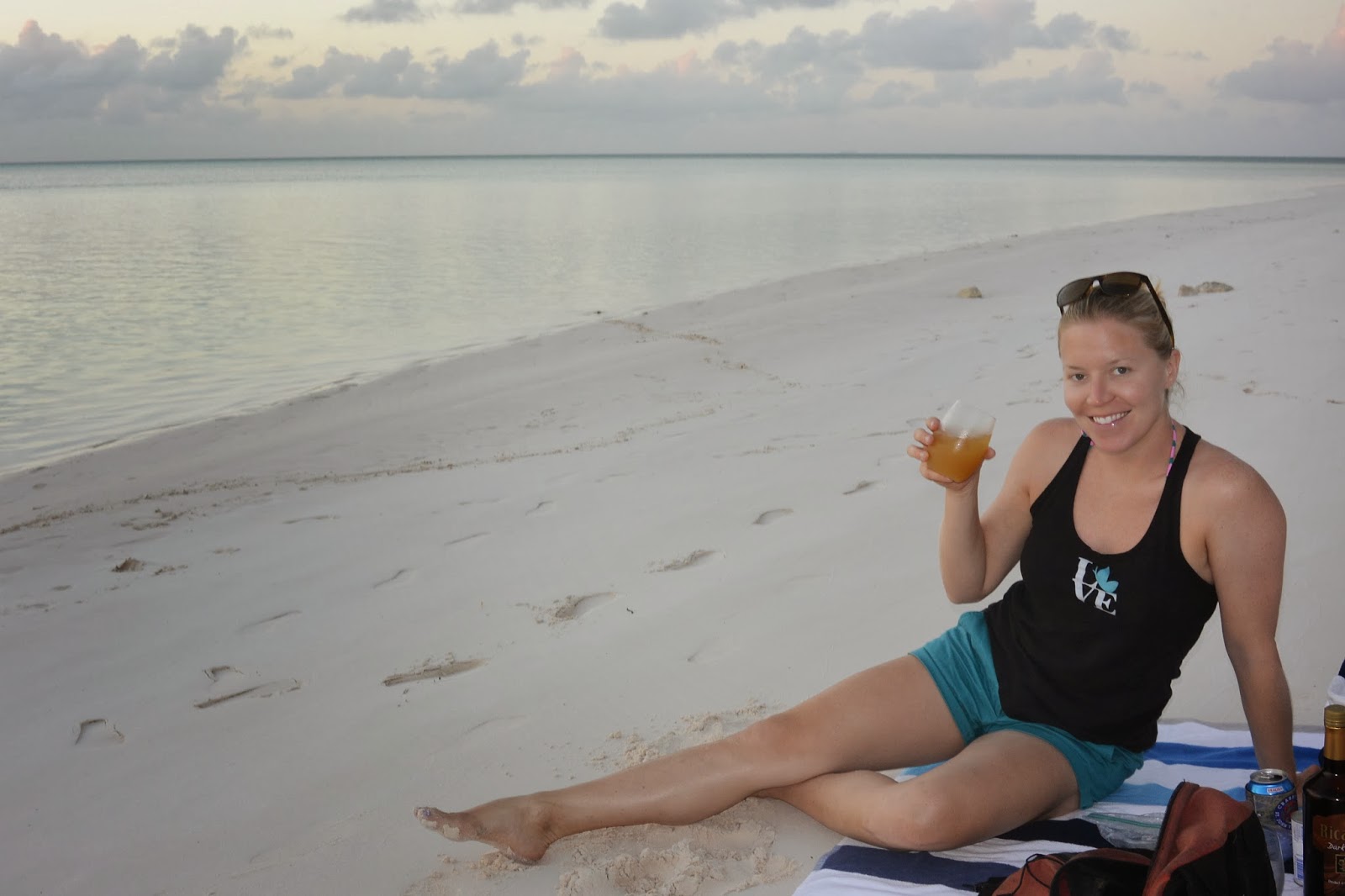 Yesterday, we loaded up our dinghy with snorkel gear and headed out to a spot suggested by Robert, one of the locals with whom we’ve been hanging out the past couple nights (he even got some green coconuts just for us, chopped them open and made gin drinks in them!). I brought my Hawaiian Sling and Dana requested I get three lobsters for dinner. Sure… We anchored our dinghy and I dove over to survey the scene. Not much in the way of coral, but tons of fish. I even saw a large stingray. No lobsters, though. I went back to the boat to grab my sling anyway. 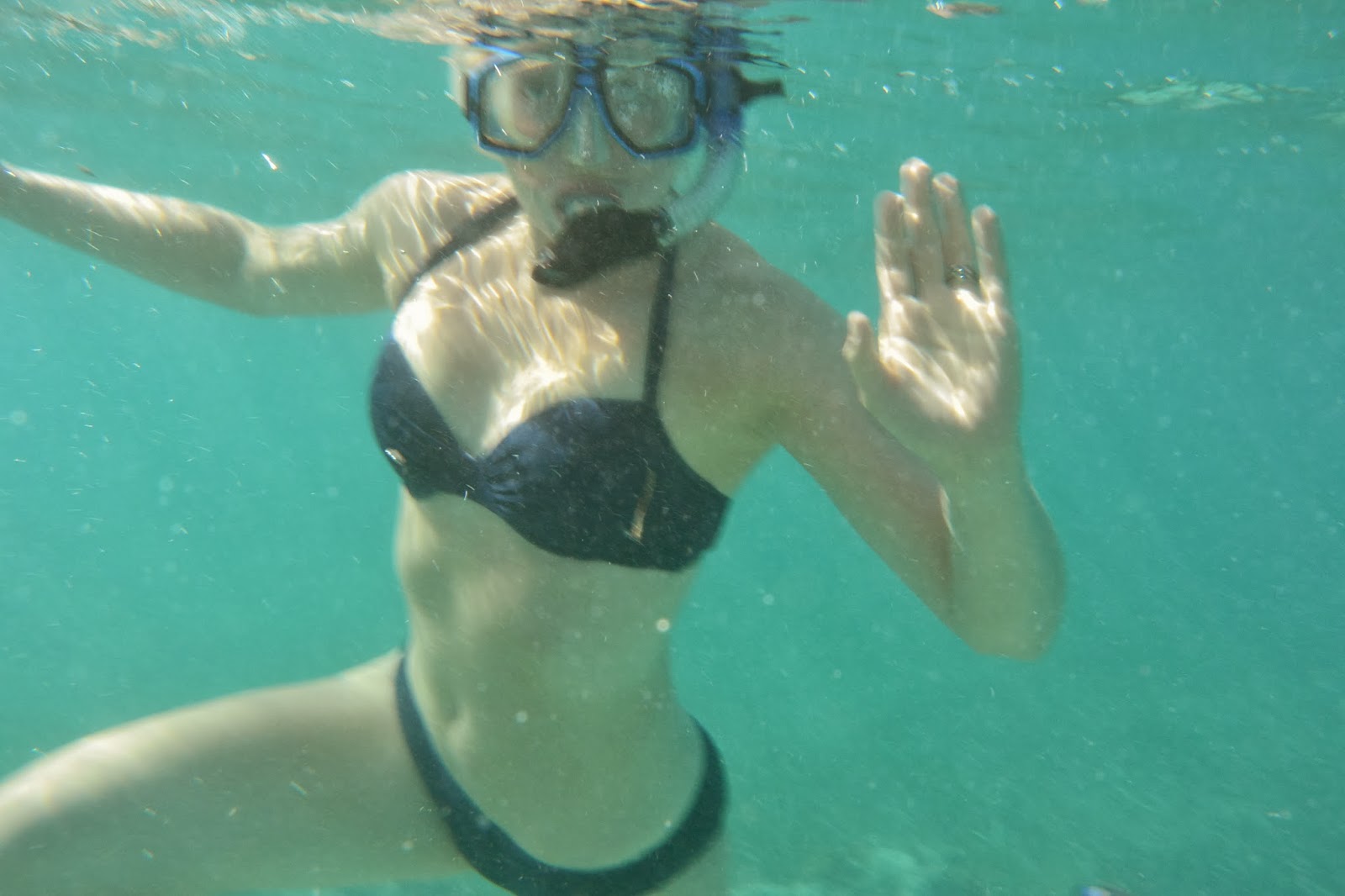 Even if I couldn’t find a lobster, maybe I could spear a snapper or grouper. I swam over to a large boulder and decided to dive down and take a look underneath. Sure enough, I saw some antennae, suggesting a lobster was hiding. I couldn’t really see the lobster, but I saw some legs and antennae. I aimed and took my shot. The explosion of power at the end of my spear totally surprised me. I pulled it out from under the rock, and speared on the end was a huge lobster, the biggest I’ve ever seen. It was able to squirm off, and I thought, “I can’t lose this, no one will believe me!” I reloaded and fired again hitting the bulls eye and assuring it couldn’t get off again. 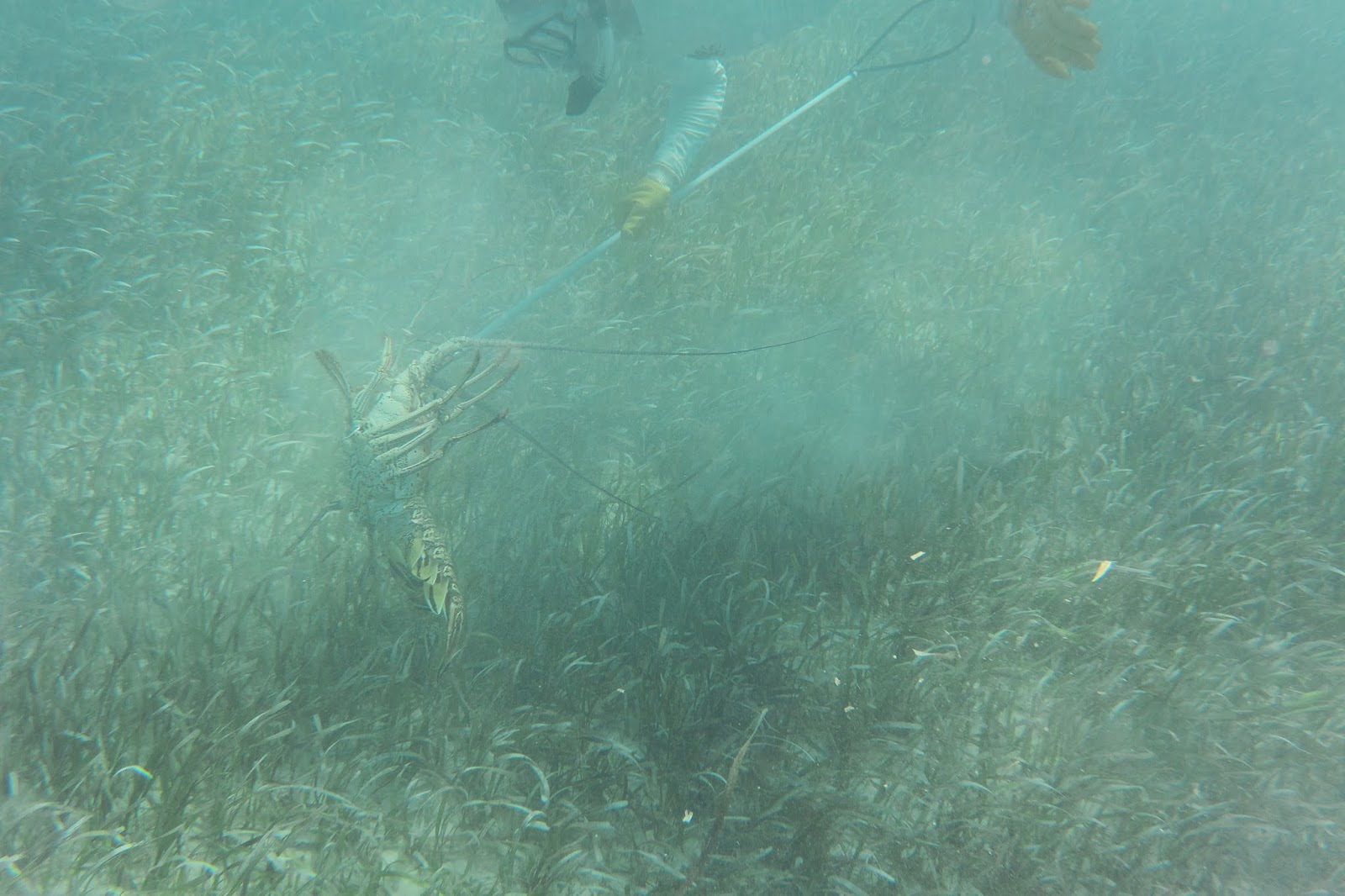 I swam back to the dinghy and yelled to Dana, “Get the camera!” We got the huge sucker on board and left to do some snorkeling. Dana decided that the lobster would suffice and I didn’t need to do any more spear fishing :-)

Later that night while at a house party our new Bahamian friends were throwing, I passed around the picture of my catch. Many of them are, or have been, professional lobsterman. They confirmed it was a once-in-lifetime lobster and I should feel pretty proud of my catch. Dana and I ate well that night, with almost a pound of lobster each. 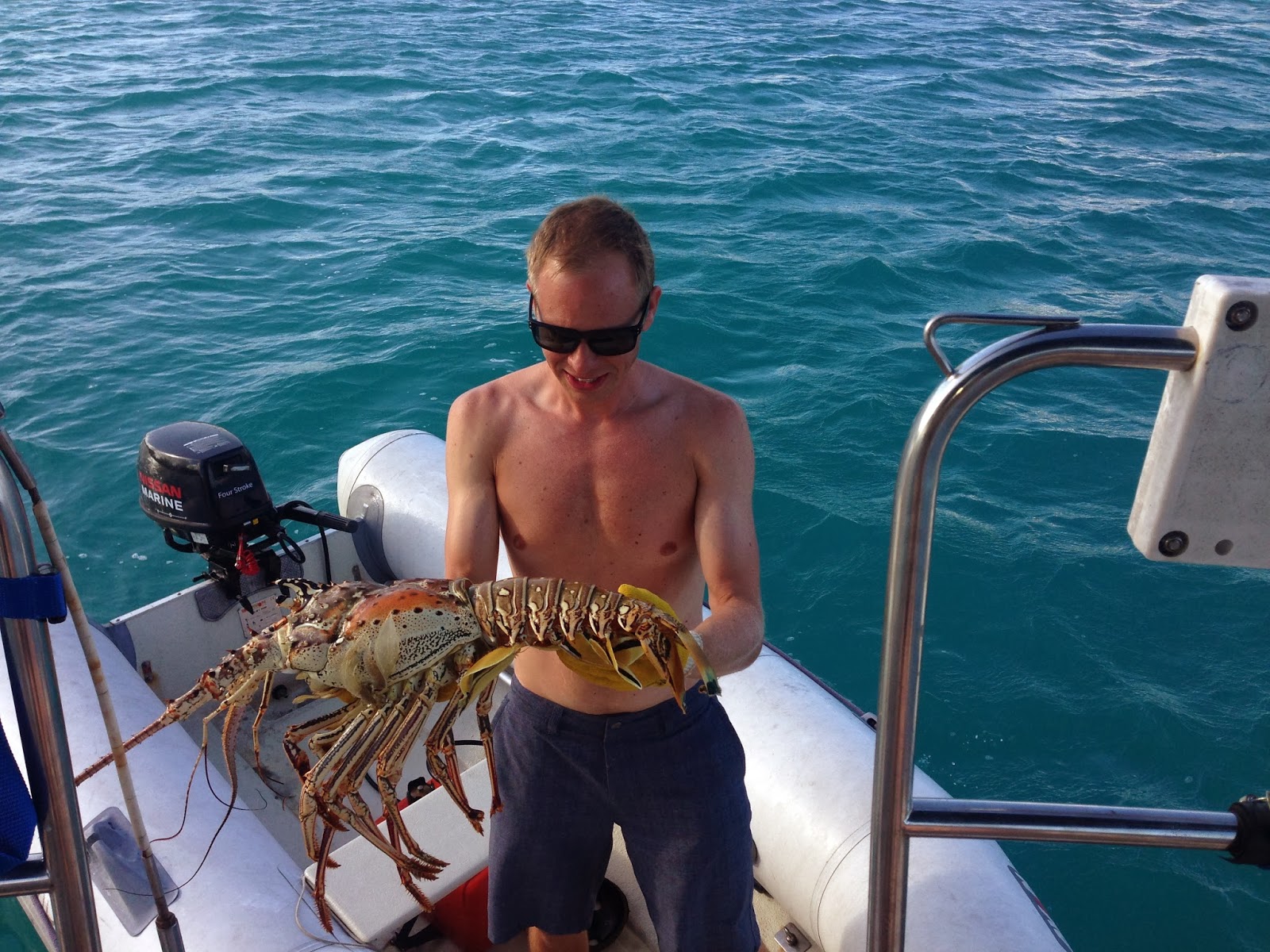 And to my friend Otis, who works for California game and fish and joked that my last lobster didn’t meet the 6” tail rule to be a keeper by Bahamian law, this lobster is totally big enough to keep. See for yourself ;-) 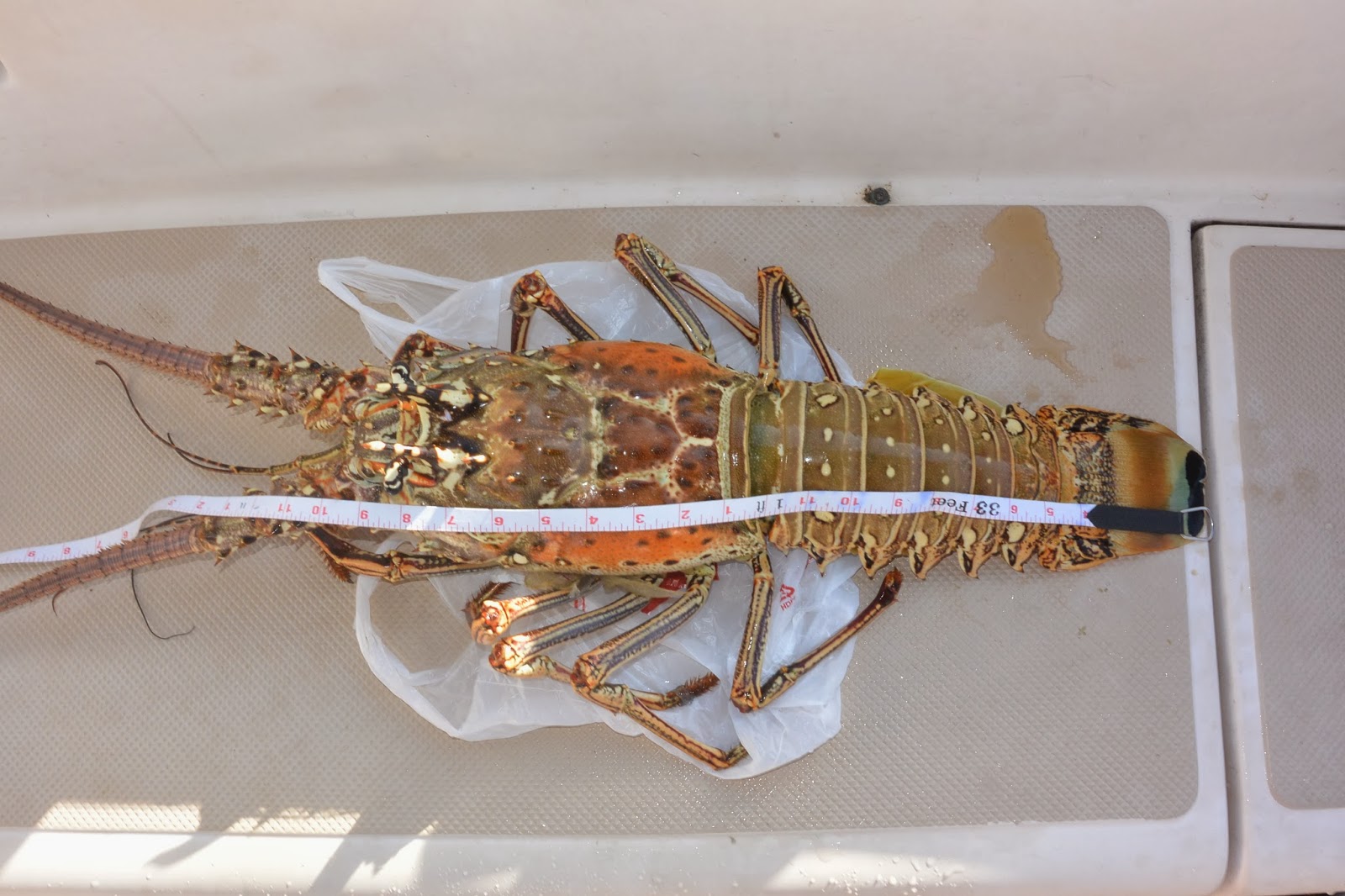 The winds will be good for heading south again on Christmas Eve, so we’ll leave early in the morning to shoot down to the Exumas. The Exumas are supposedly some of the most beautiful islands in the Bahamas and maybe the world. However, we’re starting to feel the pressure of the clock again. Patrick and Shanley, our close friends from Philly, are flying to meet us in the Turks and Caicos on January 15. We still have hundreds of miles and a couple open ocean crossings to get down there, so no dawdling. We’re totally excited to meet up with some friends from home!

Not sure where we’ll be for Christmas, somewhere in the Exumas hopefully. Happy holidays to everyone. It’s weird being in the tropics far removed from family and friends during this festive season, but I think we’ll manage. 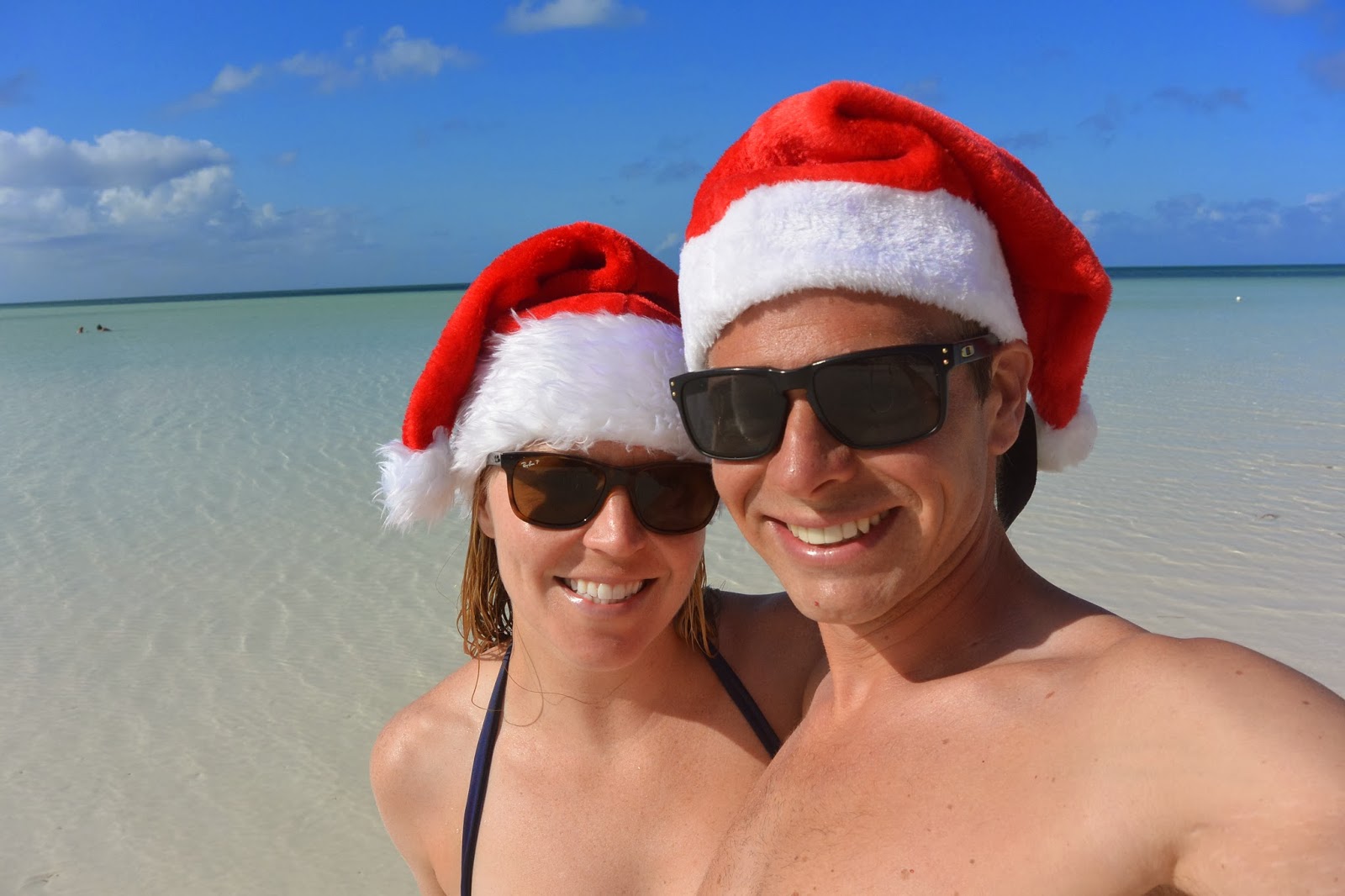