We’re almost a week into the “real” adventure (i.e., outside the conveniences of the U.S.), and it’s just as we’d dreamt.

Since the last post, we left the West End to head through the Abacos, a series of islands and cays in the northern Bahamas. Our first day was just what we needed to continue building our sailing confidence. Just Dana and I were aboard, and we planned to sail 25 miles across the sea of Abaco to an uninhabited island to anchor for the night. The wind was relatively light and in the right direction for comfortable sailing. We sailed lazily along over turquoise water. As you looked down, you could see all the way to the bottom like an aquarium. Soon it was just us, out in the open (but calm) sea and no land or other boats in sight. We put on the autopilot, I did some fishing, Dana read and did some exercises and we cruised along in comfort until we eventually spotted the island we were shooting for and dropped anchor for a serene night’s rest. 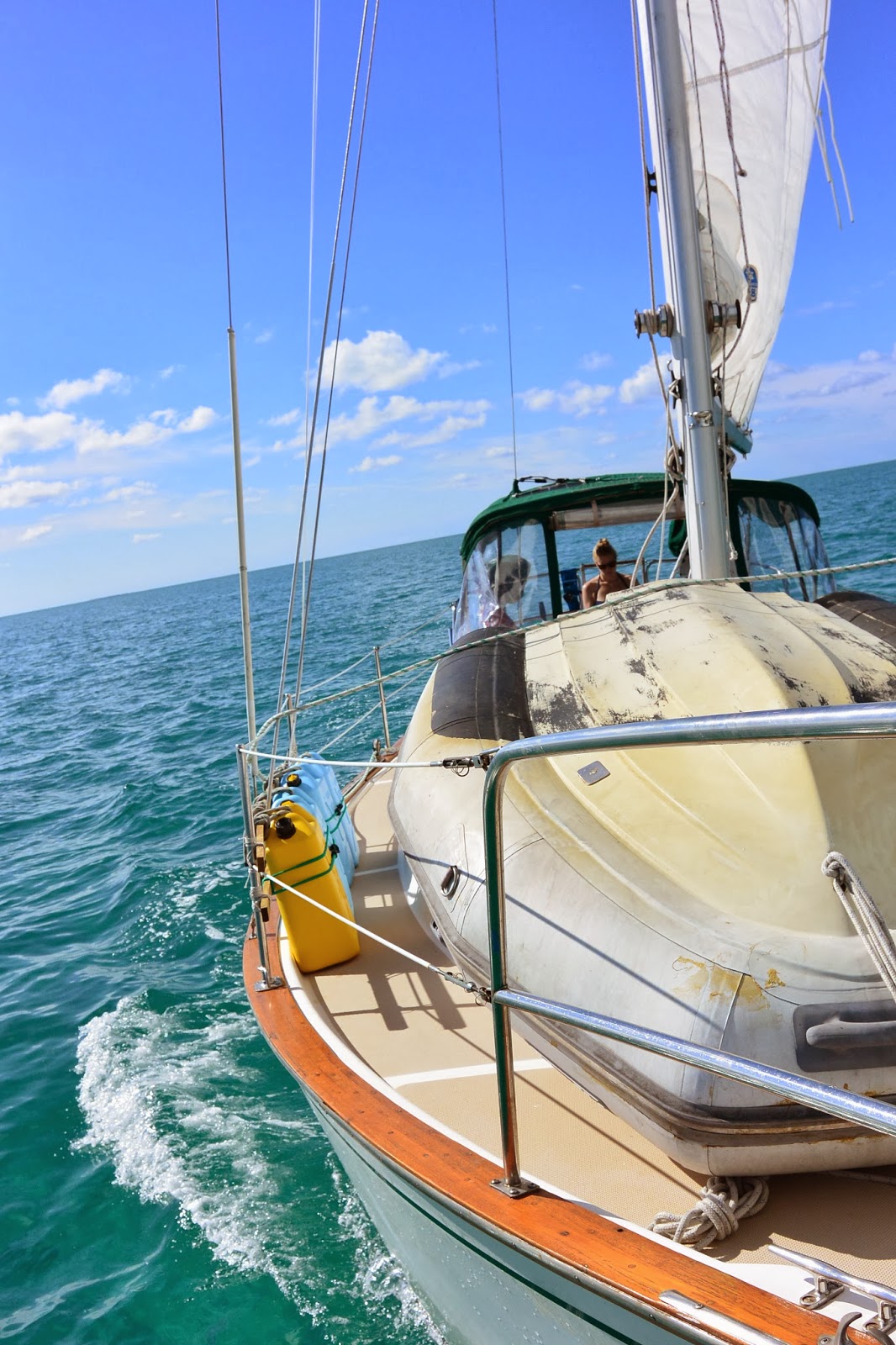 I even caught a couple fish during the sail, but still nothing big enough to cook up. 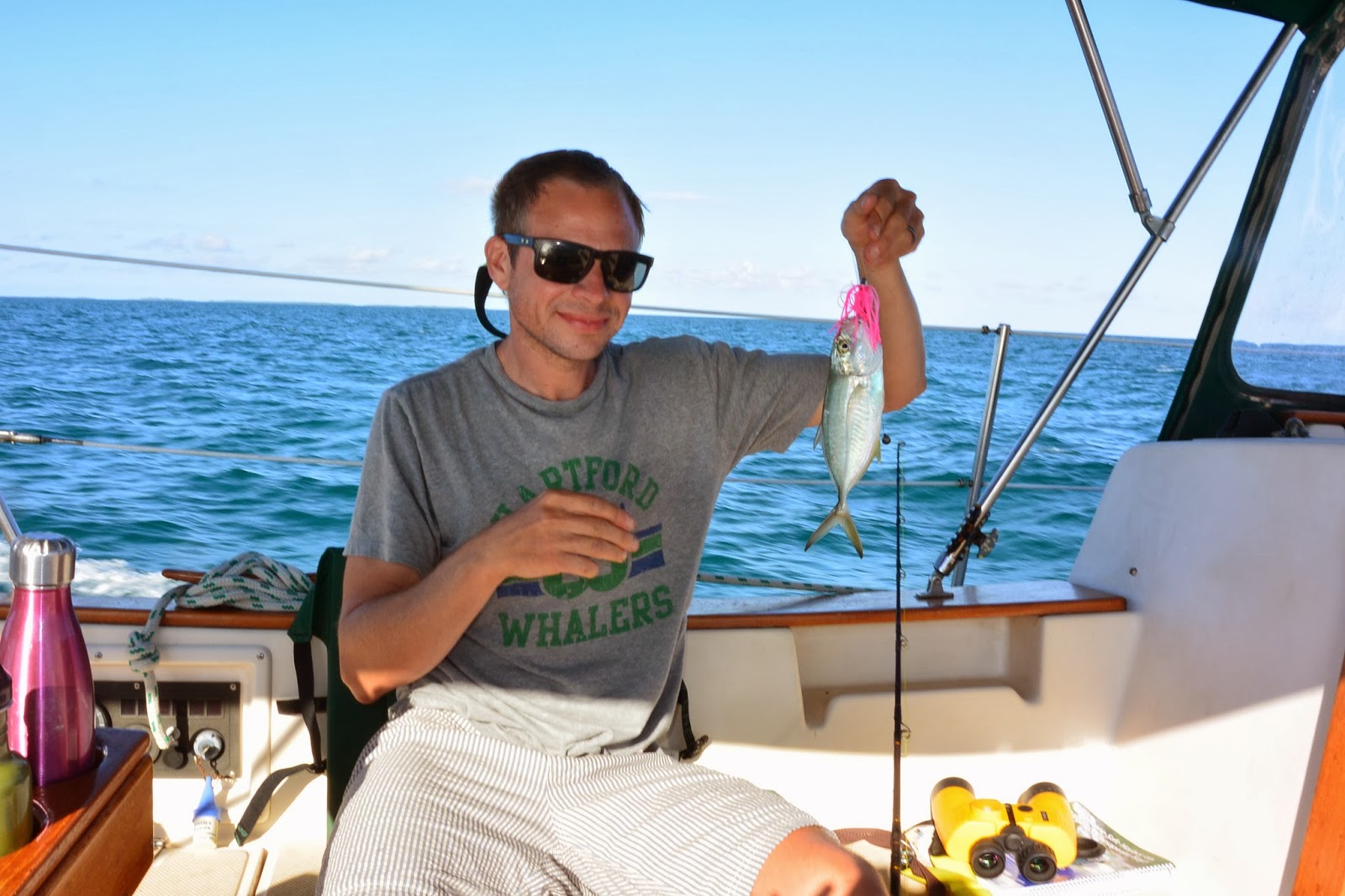 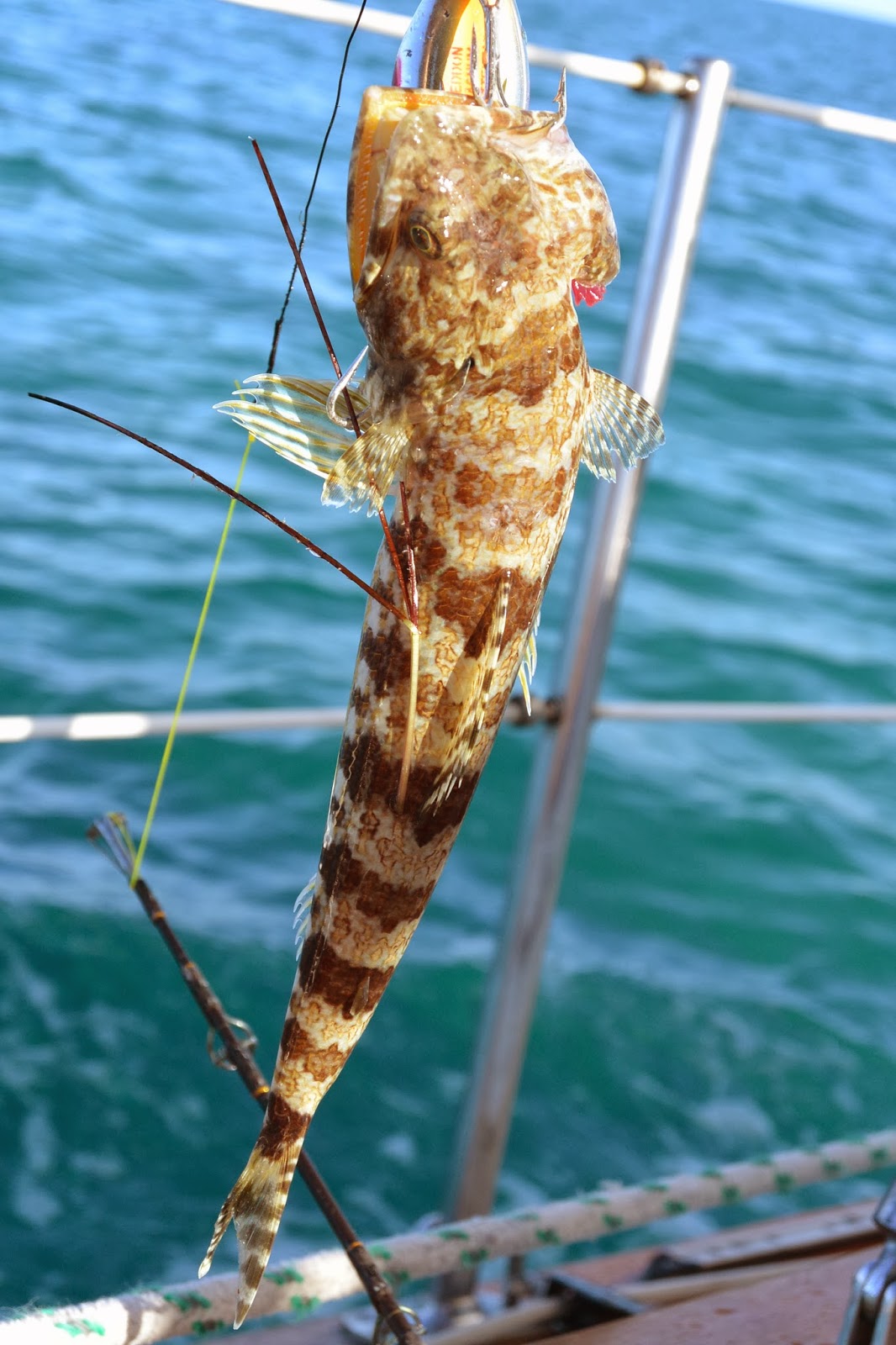 We hustled the next couple days, motoring into the wind, to make it to an inhabited island for our five-year wedding anniversary. We were married on St. John in the U.S. Virgin Islands, and the Bahamas is a good approximation. We made it to Green Turtle Cay, a beautiful Island with a quaint little town called New Plymouth. 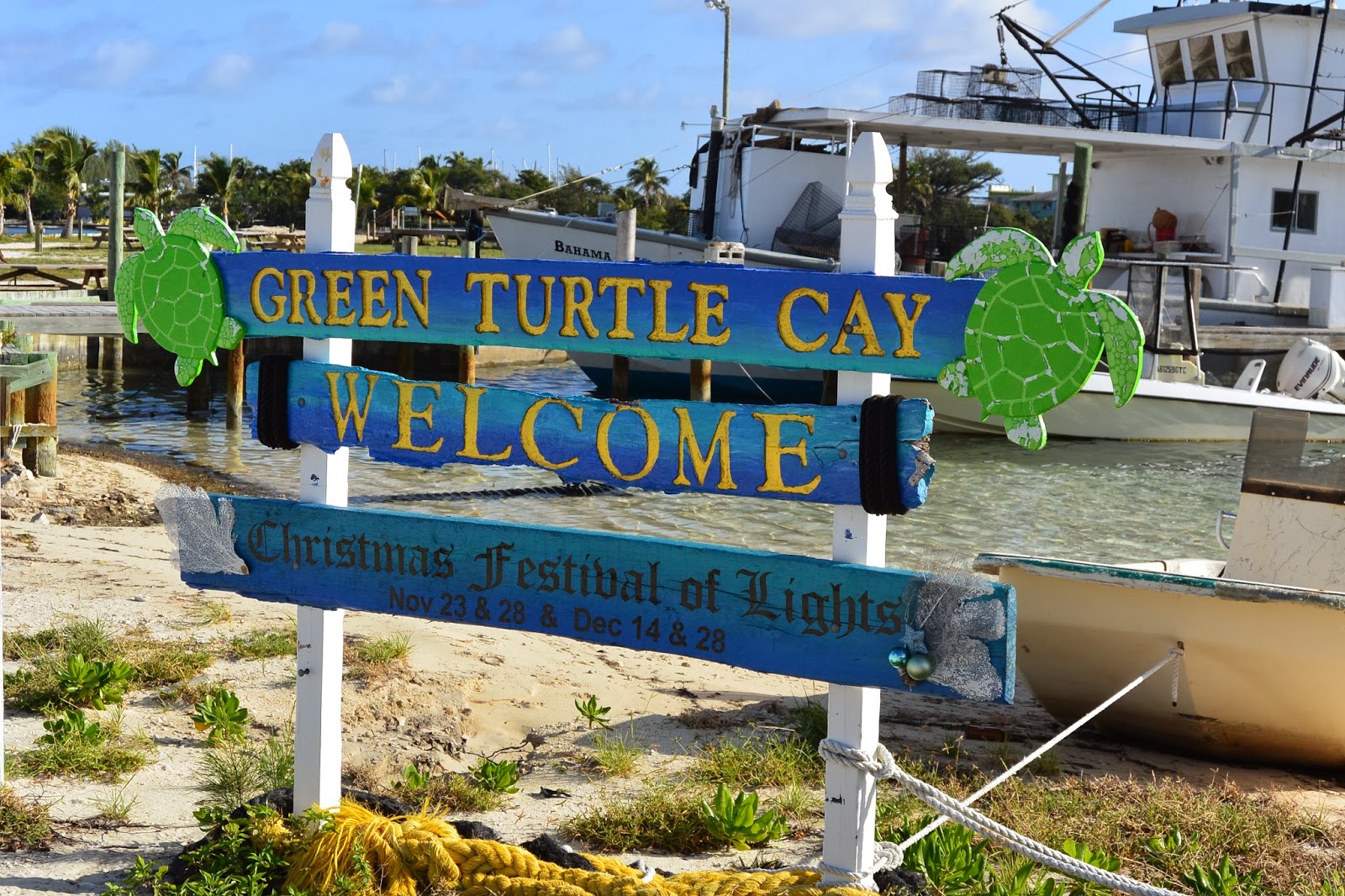 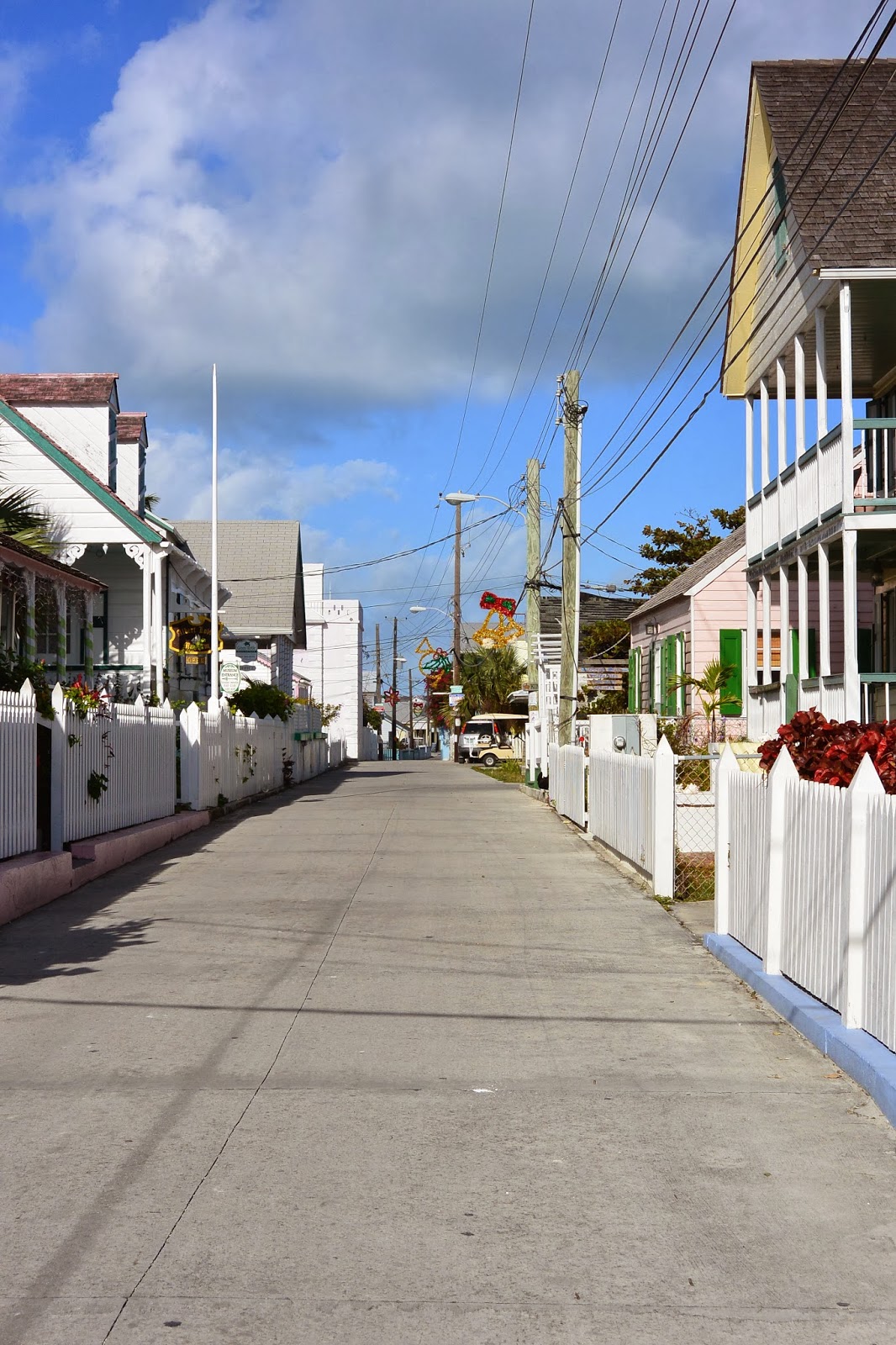 For our anniversary, we dinghied over to a restaurant, Pineapples by the sea, where they had live music. We chatted with locals and semi-locals (Floridians with a second home on the Island), and learned of some fun things to do while we’re here. I even got in on the fun of the band, adding my own rhythm section. 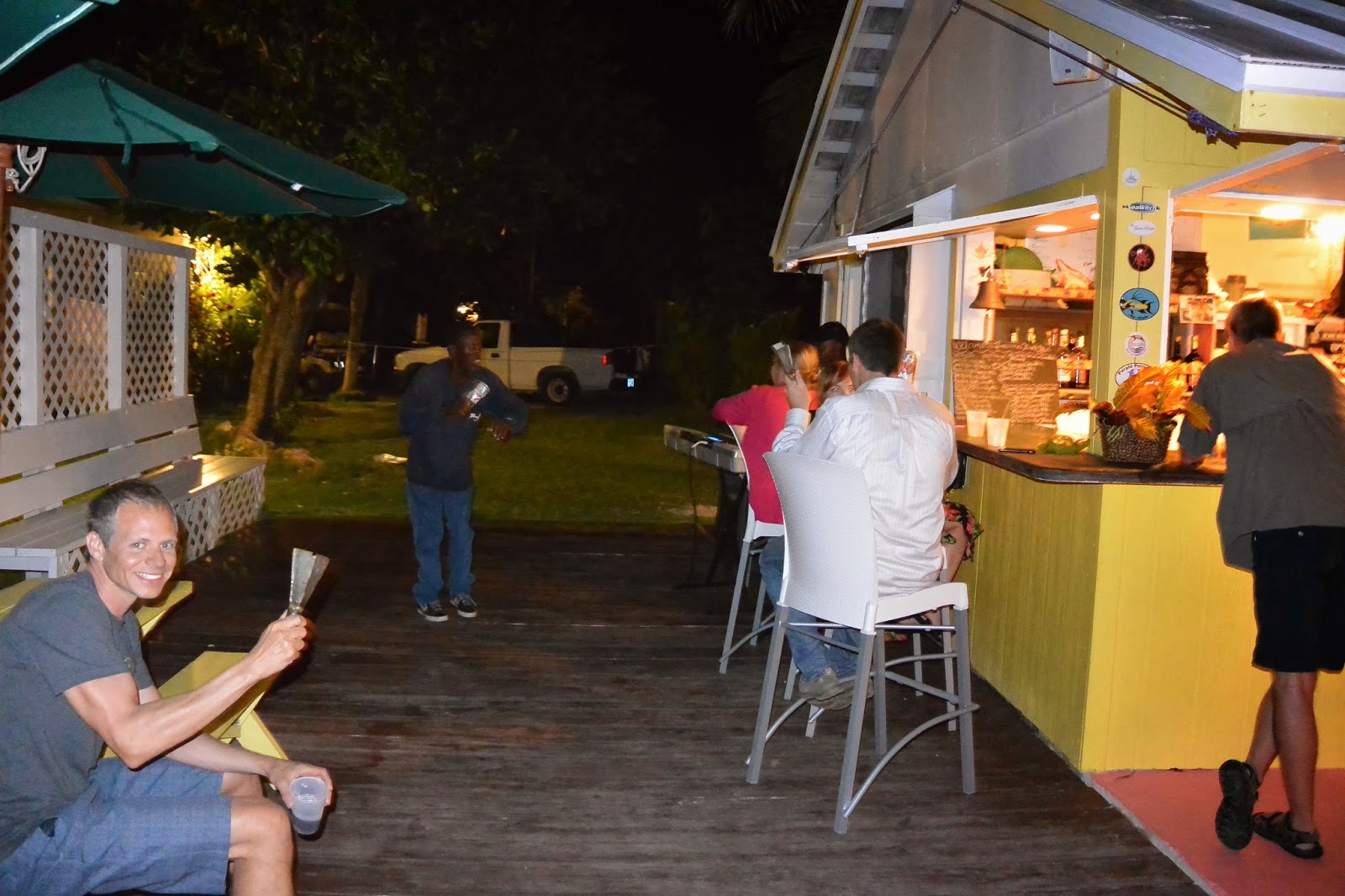 As with most of our outings, our anniversary night was not without adventure. We found Pineapples earlier in the day and had a happy hour drink. We made note of where their dinghy dock was and headed back out to Eventyr. After a quick shower, change, and a glass of Prosecco we were saving for this occasion, we hopped back in the dinghy to head to dinner.

However, now it was dark, so it was harder to locate the restaurant. We remembered there being a banner over the dock and a green light. We spotted it and motored over (by the way, our dinghy motor is working more reliably now after bringing it to a mechanic in Ft. Lauderdale. Doesn’t start every time, but I guess that’s life). We got to the dinghy dock and Dana climbed up the ladder, and quickly and adeptly tied off our line to a piling. I was about to climb up the ladder as well when we heard “Can I help you?” A gentleman was standing on the dock, so I replied, “This is Pineapples, right?” He shook his head “No.” Then I noticed the banner over the dock read “Abaco Fly Fishing Charters.”

We apologized profusely, and he didn’t seem that perturbed. He comforted us, “It happens all the time, just happened last Friday.” We shoved off and headed toward the restaurant. Again, it being dark, we didn’t see the well-marked channel we needed to stay in, so we were heading right toward a shoal (shallow patch of sand). We were laughing about our ordeal when all of a sudden the propeller jammed into sand and the boat shuddered to a stop. Dana remarked “I think it’s really shallow here,” which I didn’t find all that amusing. I took out the oars and we rowed off the sand bar. After making it to deeper water and restarting the outboard we were finally able to enjoy our anniversary evening.

Since then, we’ve been exploring the island. I’ve been running when I get a chance, averaging 20 to 30 miles a week. No marathon training, but I guess I’ll stay in shape. Running for me is more out of habit or compulsion than anything else at this point in my life. It’s a constant I can rely on, no matter what stressors are needling me.

New Plymouth seems to be nuts over Christmas. Along with the plethora of Christmas decorations, they have numerous Christmas activities on the schedule. Last night a group of carolers passed us wassailing from house to house. Kind of weird seeing the Christmas spirit in 80 degree weather, but I guess us northerners will have to get used to it. 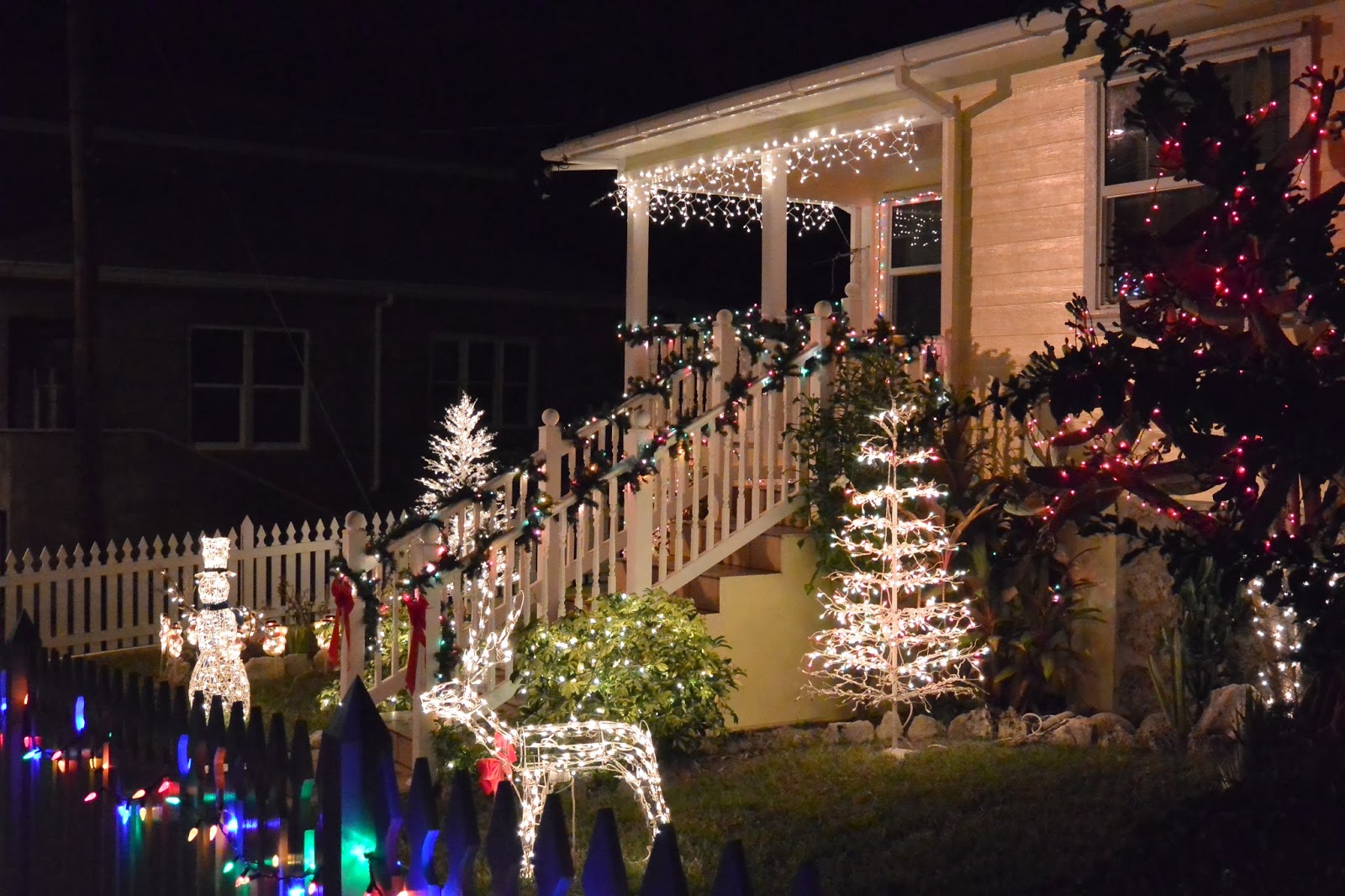 Yesterday was one of those beautiful, magical days you dream about. Upon the advice of one of the ex pats we met at Pineapples, we took our dinghy for a long ride out around the Cay to a supposed uninhabited island with a picture perfect beach. The uninhabited island is called No Name Cay, and we spent several hours lounging about, writing postcards, and toasting the warm sunny weather. 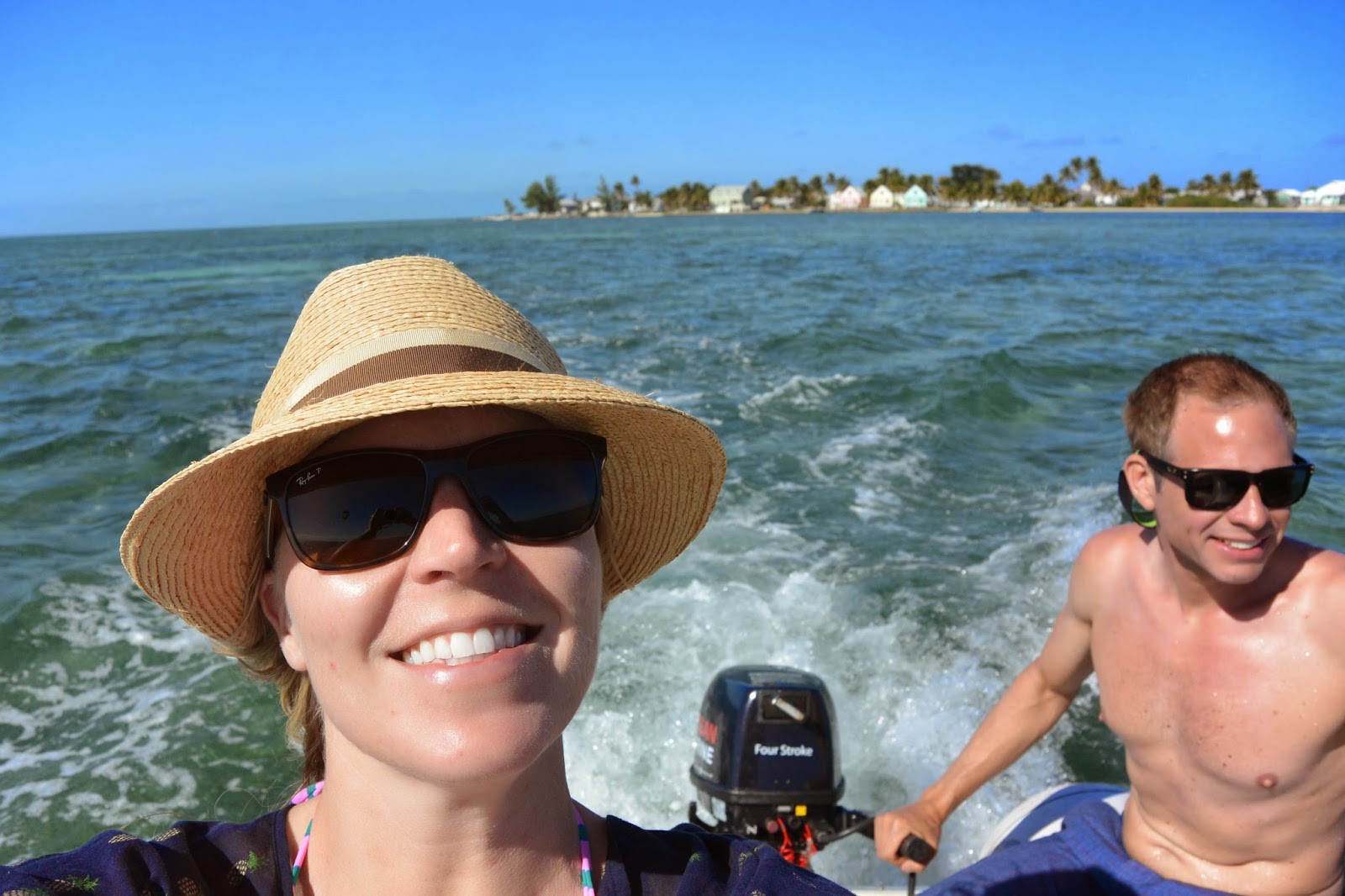 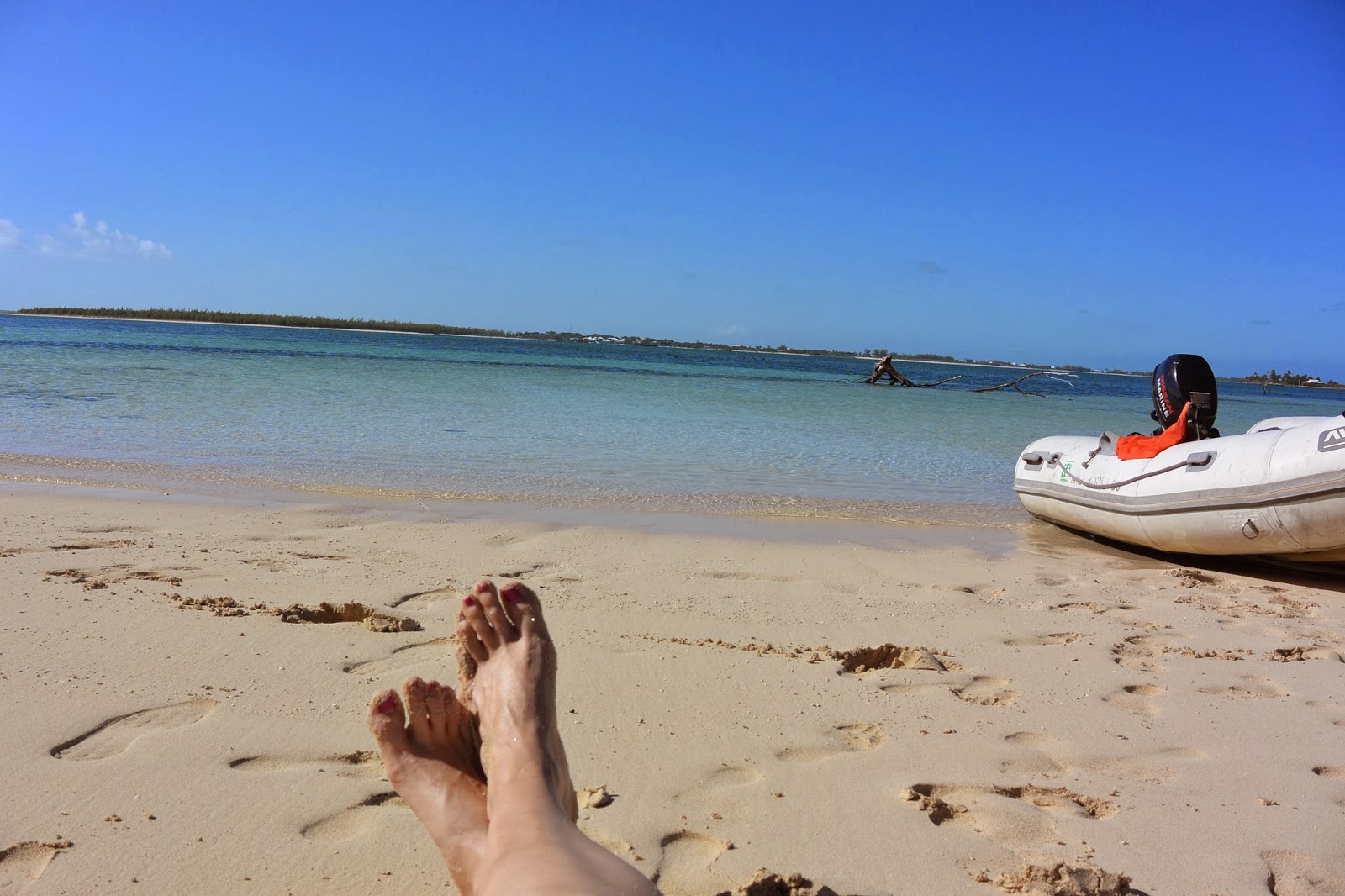 In the next couple days we’ll shove off for Treasure Cay. Our Philly friend Jackie and her parents recommended it and locals have confirmed it has the prettiest beach in all of the Bahamas. Tough life but it’ll do.