Another day, another gale 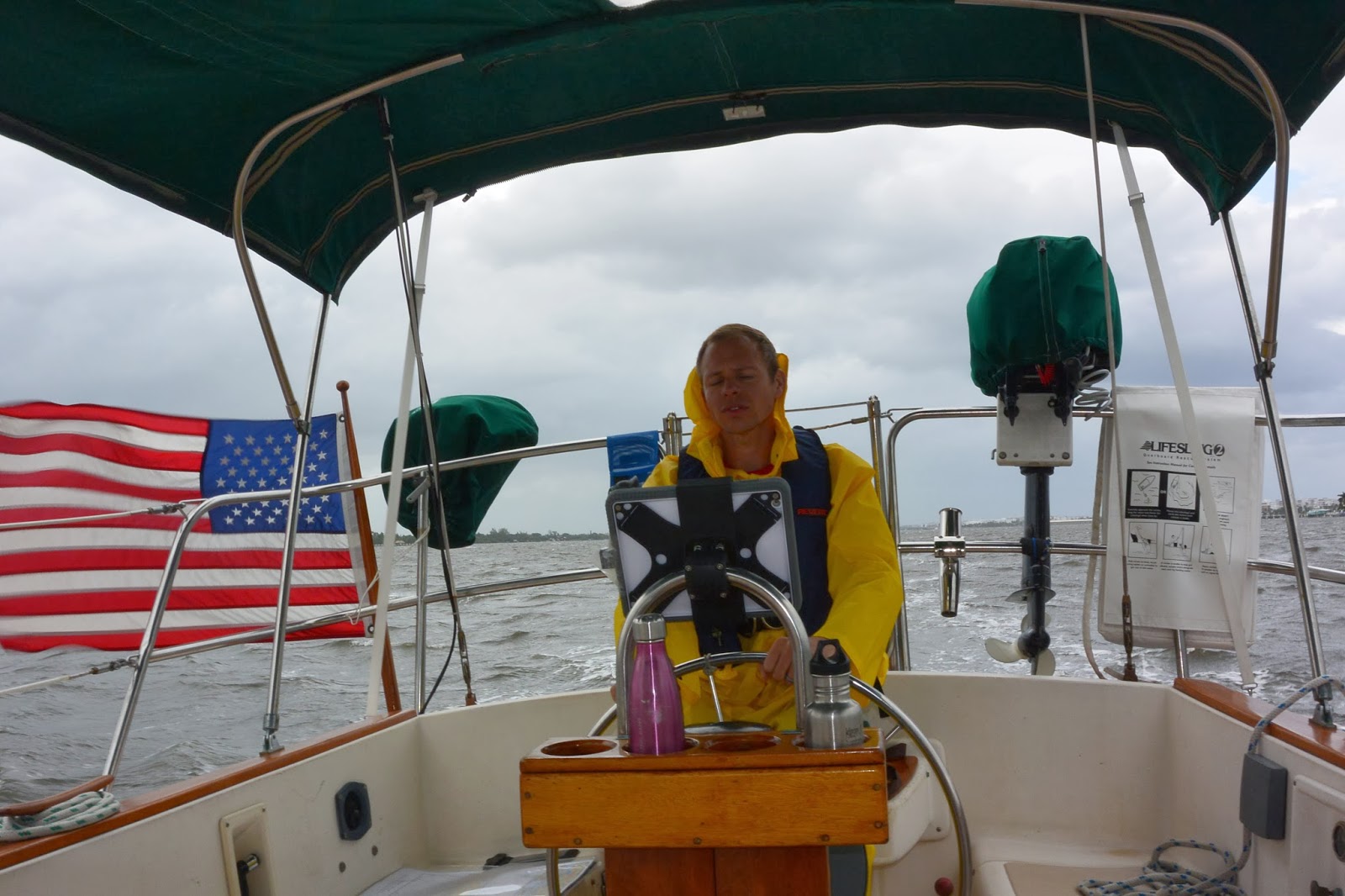 Who would have thought that sunny Florida was such a stormy place? Twice in less than a week the national weather service has issued small craft advisories warning of extremely high winds. We heeded it last time and took a day off, but decided to push forward today. Having anchored last night, we woke frequently to the sound of the wind absolutely howling. I got up five or six times to make sure we were still in the same spot. In the morning, weather.com warned of gale force winds in the vicinity, building throughout the day. 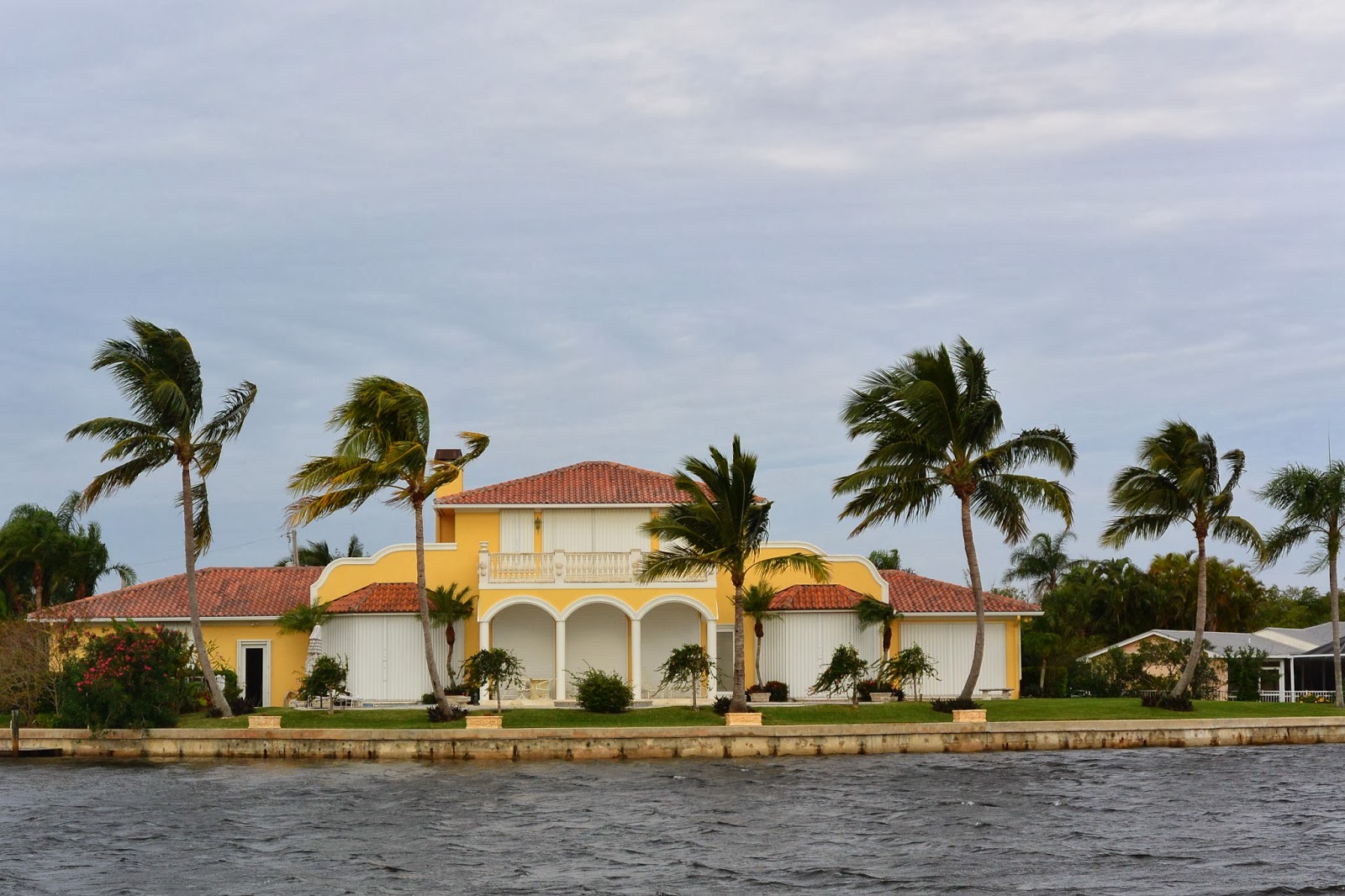 Staying put would have been miserable, so we decided to raise the anchor and push south. The winds were already at 20 knots at 6 am, predicted to get up to 35+. Raising the anchor against the wind and waves was no easy task, but we got that done and were underway. Luckily, the wind was at our back, making our boat much faster and the waves with us. Conditions weren't so bad at first, but as tends to be the case, the situation rapidly deteriorated. In addition to high winds, it began to rain buckets. The water was rough with white caps all around and spray flying over the deck. No other boats were out aside from those at anchor, and they were really getting tossed around. 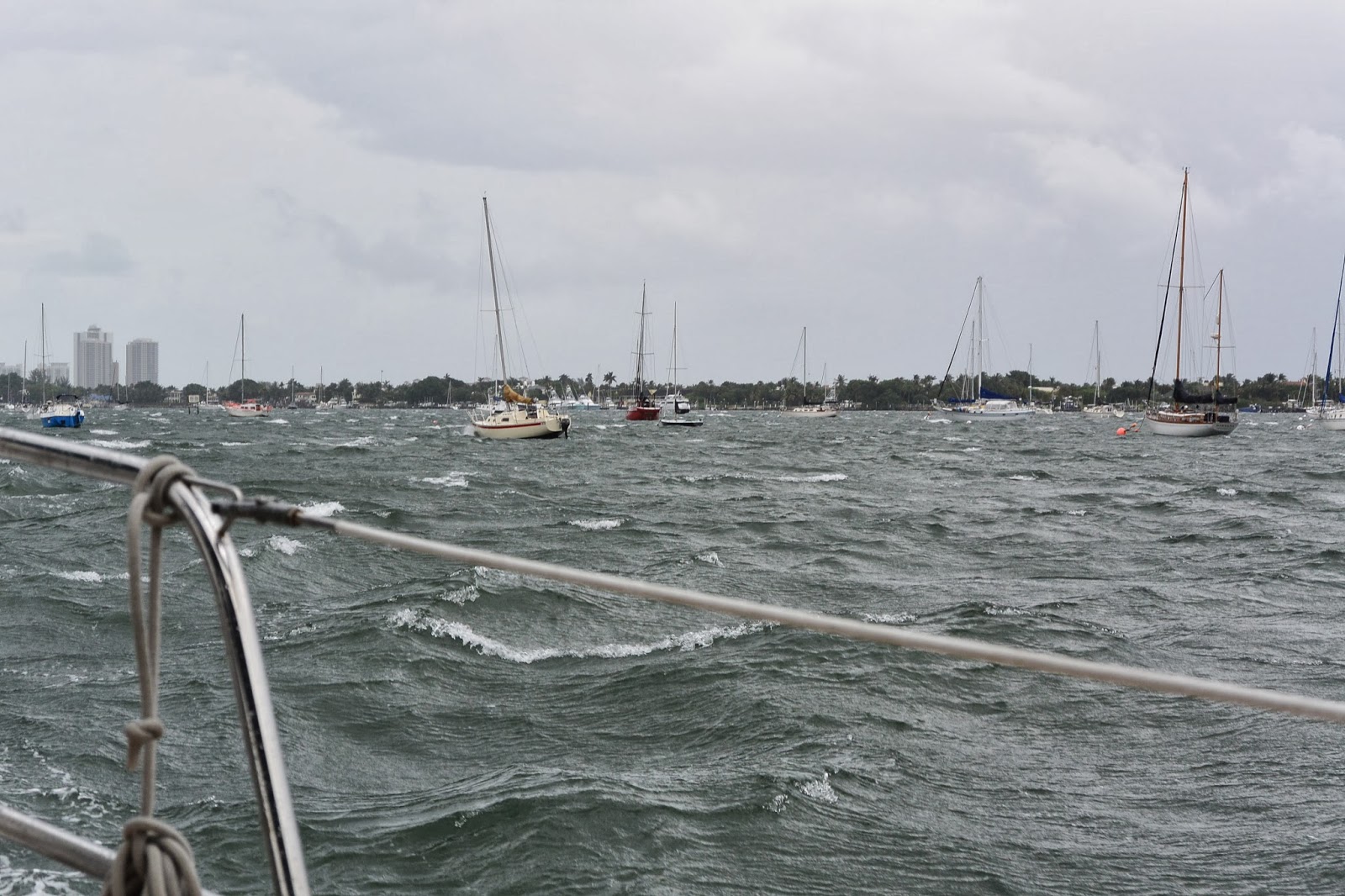 I was not a happy camper. 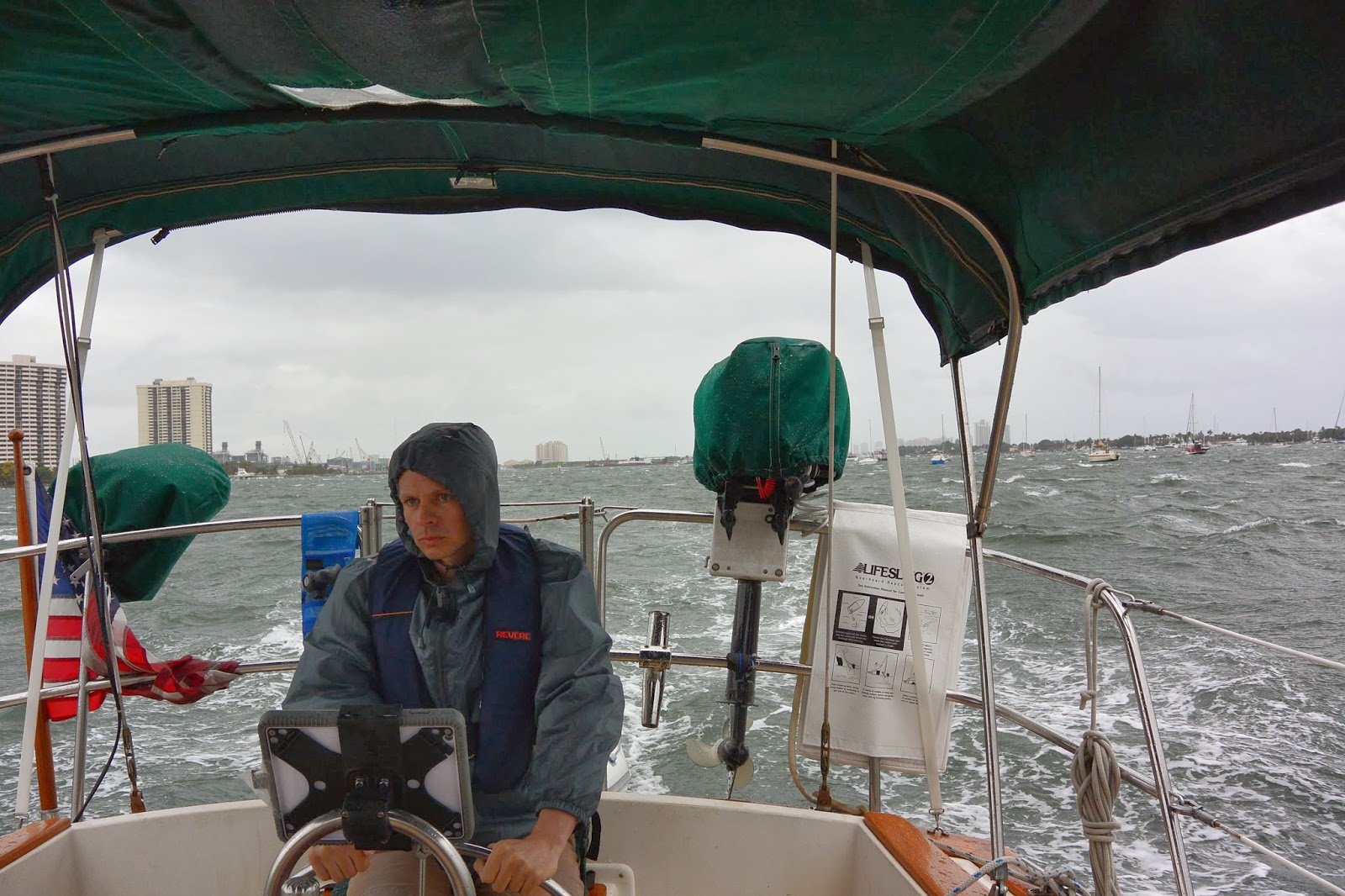 To make matters worse, today happened to be a day where we were to encounter 14 swing bridges that opened on various schedules, none of which corresponded to our boat speed. That meant every mile or two we would have to wait and circle for 5 to 30 minutes for the next opening. With each one, we were optimistic we could make it, only to be told by the bridge tender, over the VHF radio, we were too late. Circling is fine on a nice, calm day, but in gale force winds with choppy water, it's not so easy. Especially when you have to stay in a narrow channel with shallow water on both sides. After one bridge that took over 30 minutes to open during a particularly windy stretch, we threw in the towel and pulled into a marina. We still managed to make it 50 miles or so today, but it was probably ill advised. A fellow cruiser we met at a marina up in South Carolina warned us, "a deadline is the most dangerous thing for a sailor."

As if to add insult to injury, upon finally pulling into a marina to fill up on fuel and get a slip for the night, I accidentally put several gallons of gas into my diesel tank. A miscommunication with the dock master over the phone prior to entering the marina ended up in the following conversation with the dock hand who handed me the fuel pump. While I was pumping the fuel, I noticed that it was not the typical pink color required by law for marine diesel.

Me: "Hey man, this is diesel, right?"
Dock hand: "No, it's gas."
Me: "You're kidding right?" (laughing, since I was desperately hoping he was pulling my leg)
Dock hand: "No." (deadpan)
Me: (expletive deleted)

That lead to an hour of splicing into the fuel line, pumping out the entire fuel tank, and refilling all 25 gallons with diesel.

A positive of today's weather was that we got to wear our offshore life jackets for the first time. Dana said wearing it reminded her of the "thunder shirt" (a tight fitting coat for anxious dogs that helps them feel more secure). Apparently, she felt a little more at ease wearing the life jacket ... but not much. 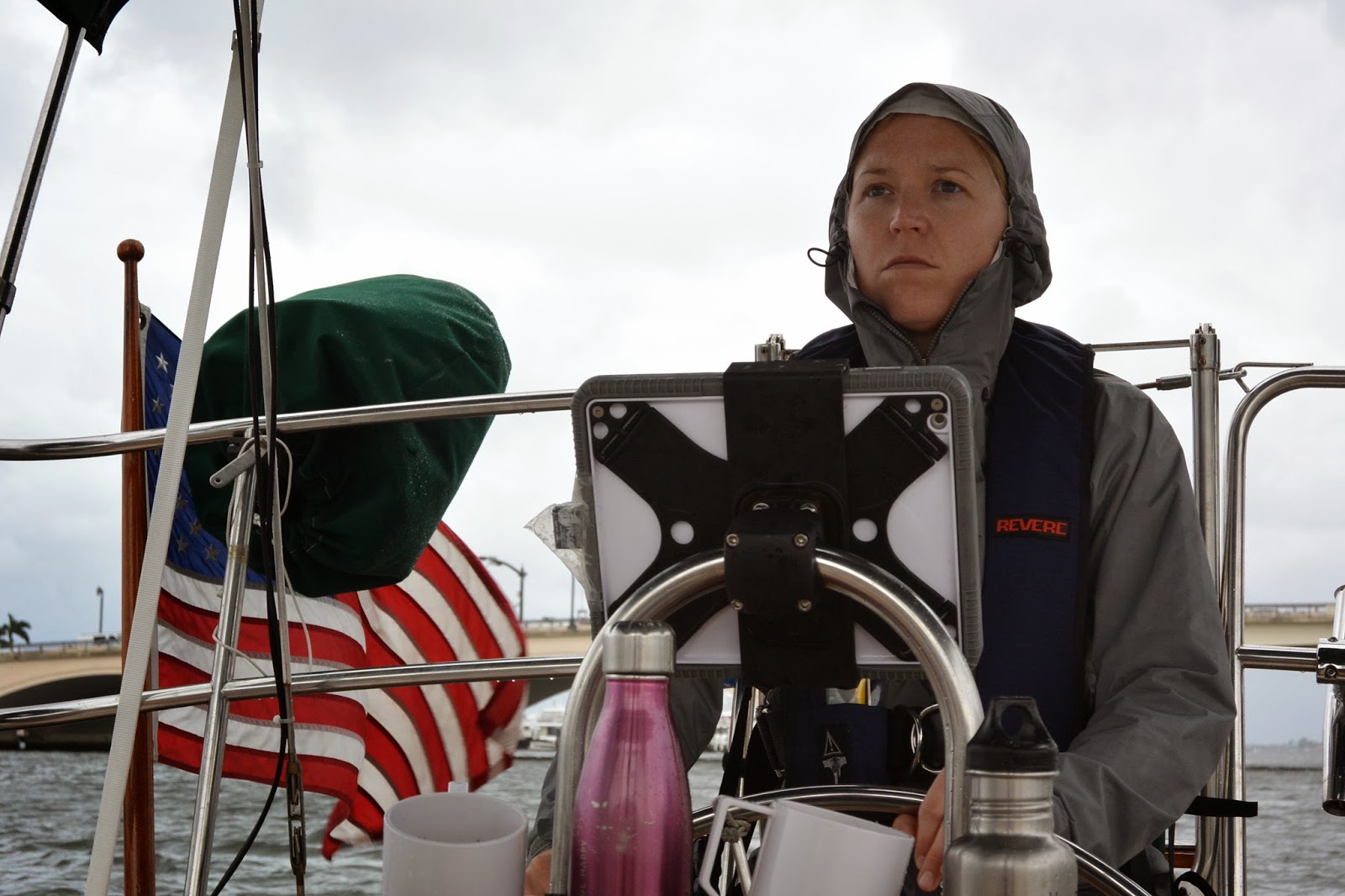 Yesterday was like a different world. A beautiful day, we stopped around midday in Vero Beach to meet quickly with a relative, Beverly, who lives there. We had a brief but fantastic visit catching up on family news and discussing our plans for the future. Beverly crocheted an afghan that she gave us as a wedding present. That afghan is currently my blanket on board! Hopefully we can have a longer visit on our return trip. 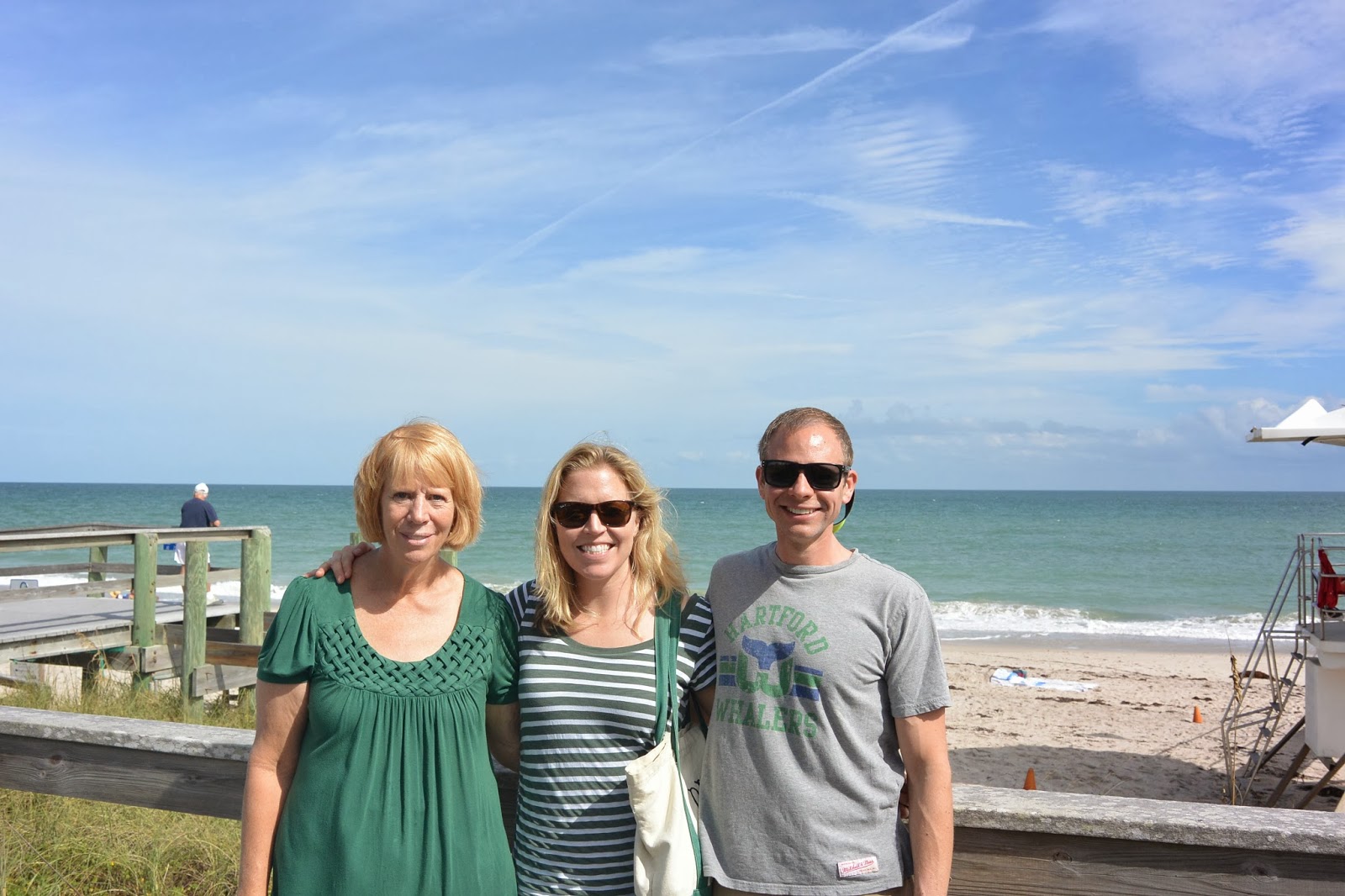 Aside from treating us to a great lunch on the boardwalk by the ocean in Vero Beach, she also surprised us with some local oranges. These are like no oranges I've ever seen! They are huge and look like grapefruits, but are sweet like an orange with a slight tart grapefruit bite. I'll have to find out what they are! 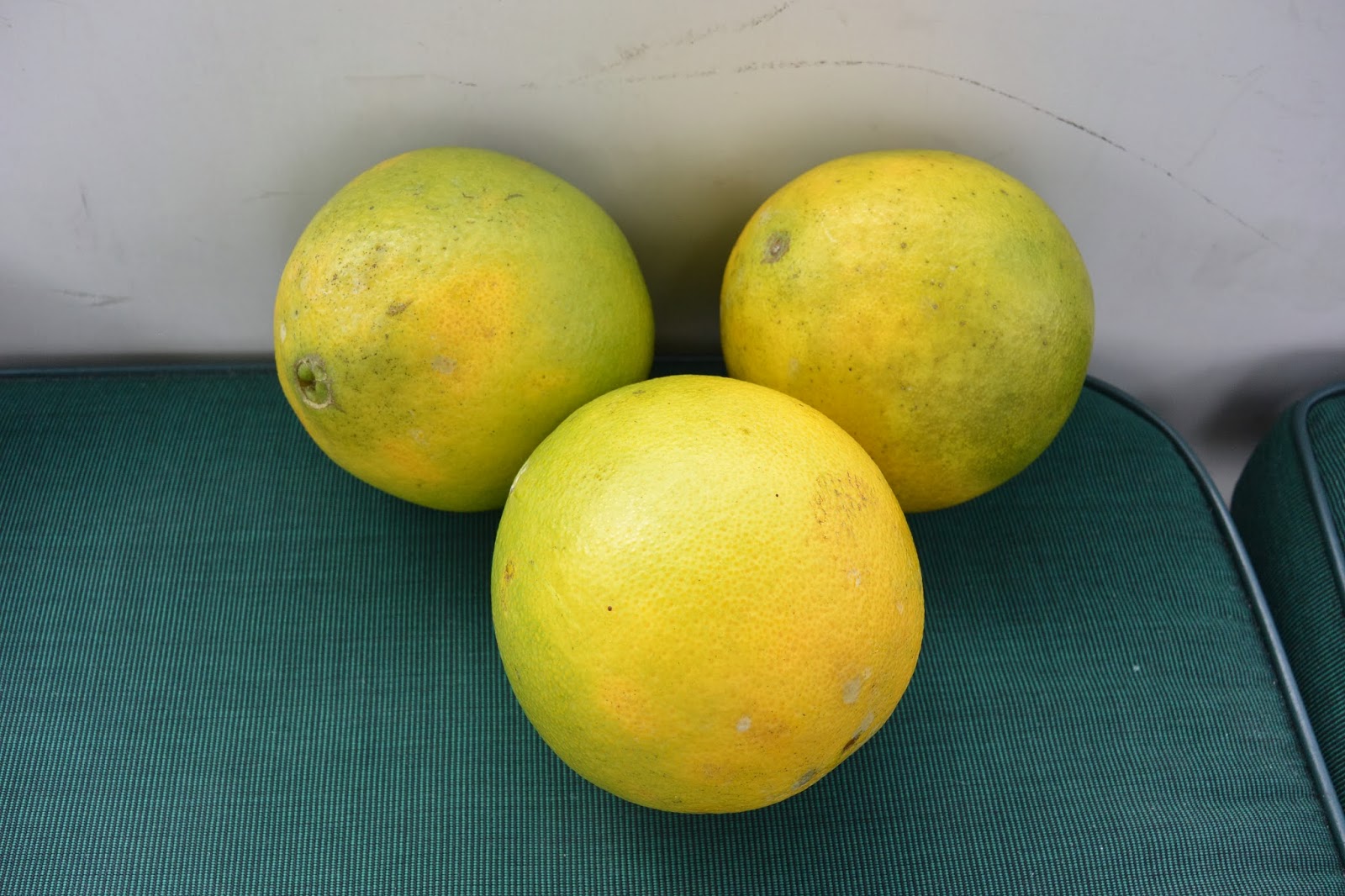 Tonight we're holed up in Boynton Beach, just north of Boca Raton. We should be at the Boca Raton Resort and Marina in the am tomorrow. However, this time I'm not counting my chickens before they hatch.
Posted by Unknown at 4:29 PM