New friends and the cusp of leaving for the Bahamas

Sorry for the long post today, but it's been a little while since I've had internet access :-) 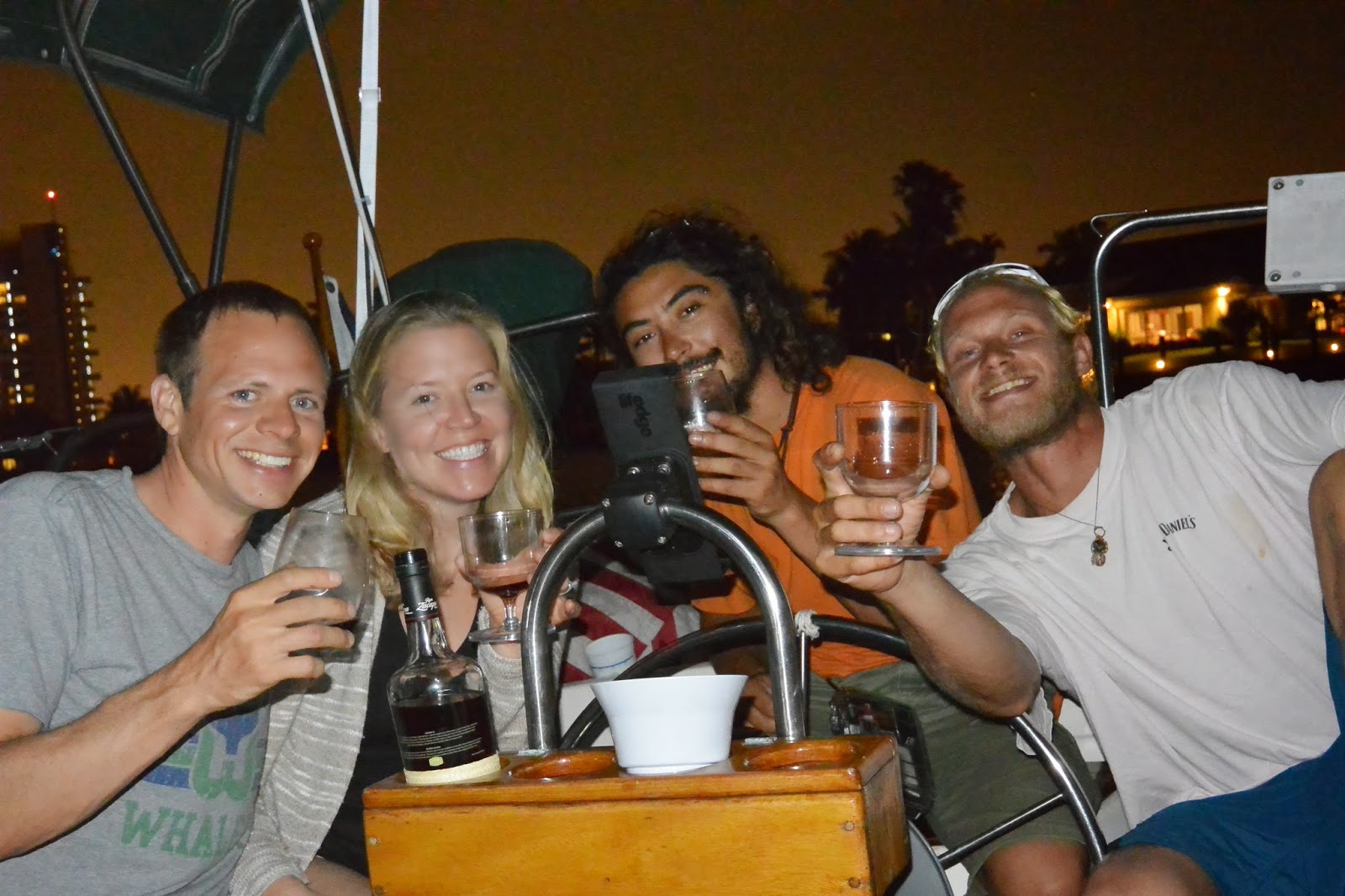 We spent the last week anchored in Lake Sylvia, a small lake off the intracoastal waterway in Ft. Lauderdale crowded with other boats on stopovers heading to various exotic ports. Lake Sylvia is a pleasant place with lots of nice folks anchored about. It's lined with fancy houses and palm trees. I practiced some fishing here and finally caught something other than a couch cushion (the best I could do back at the last marina). Nothing was big enough to cook up for Dana, but it was good practice for the mahi mahi, tuna, and grouper I'll hopefully be hooking once we're out in the open ocean. In little Lake Sylvia, I landed a catfish, pompano (I think), and even a small puffer fish who blew himself up once I brought him aboard. They all made their way back to the deep, but their big brothers better watch out. 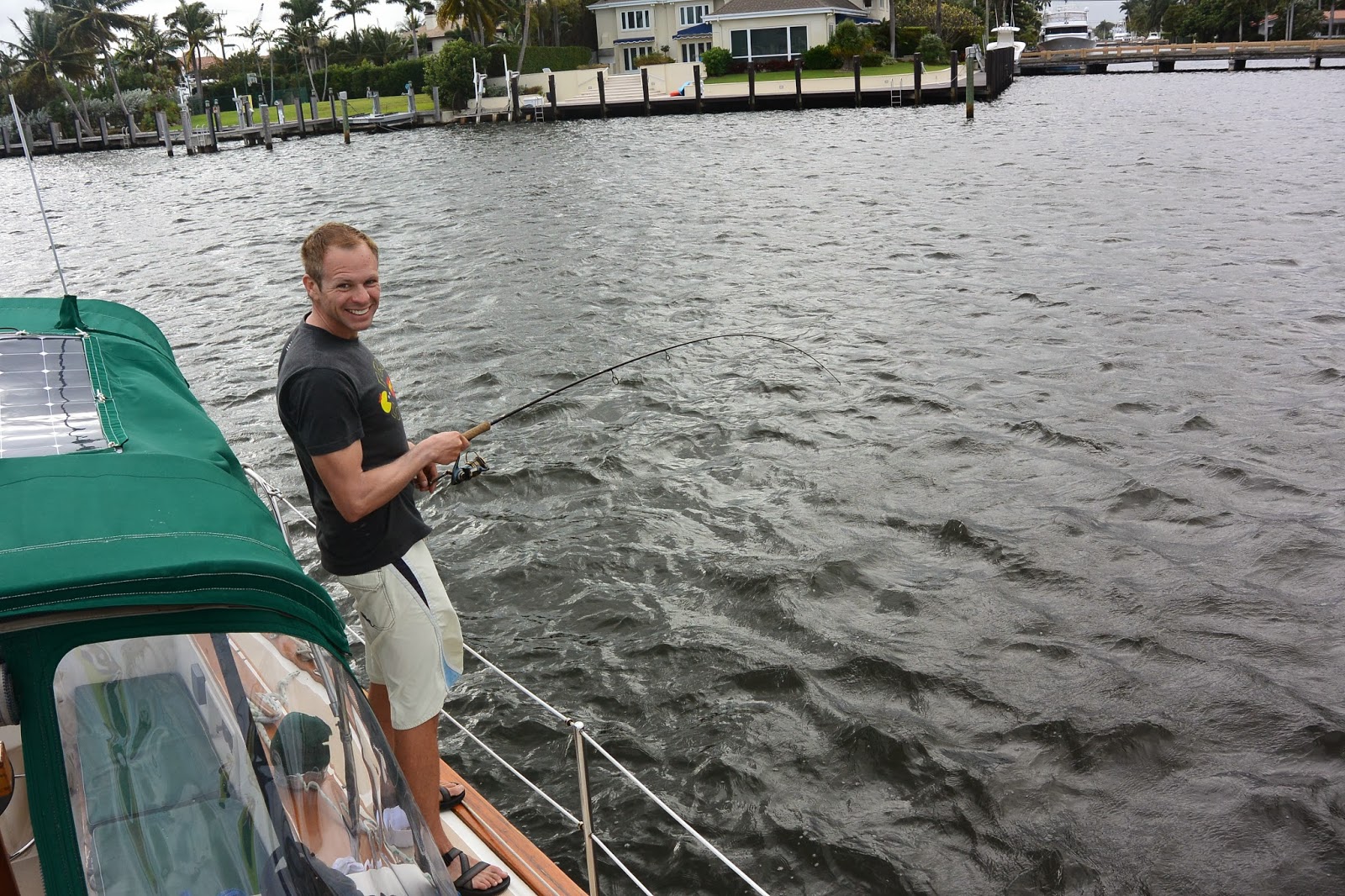 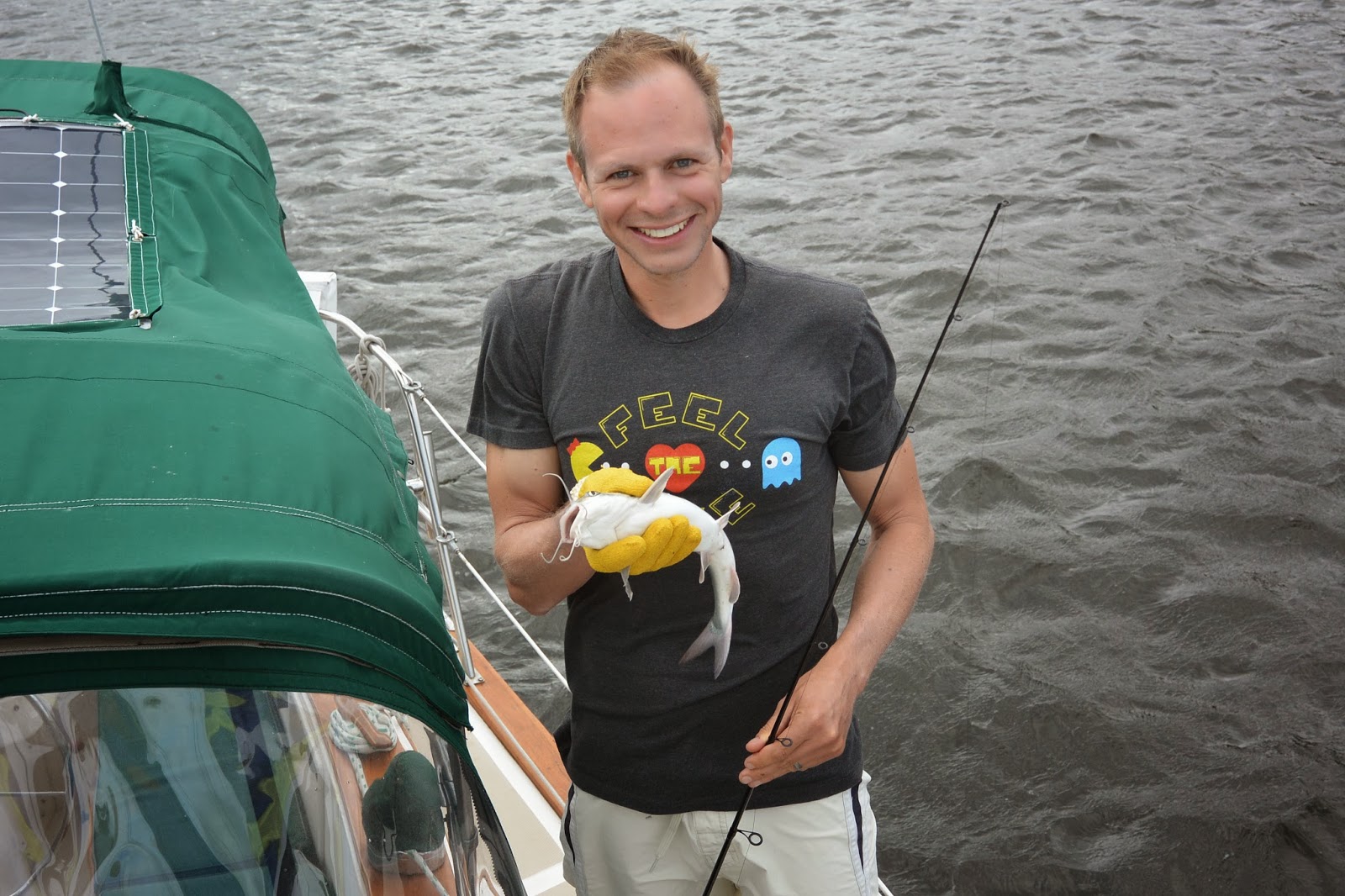 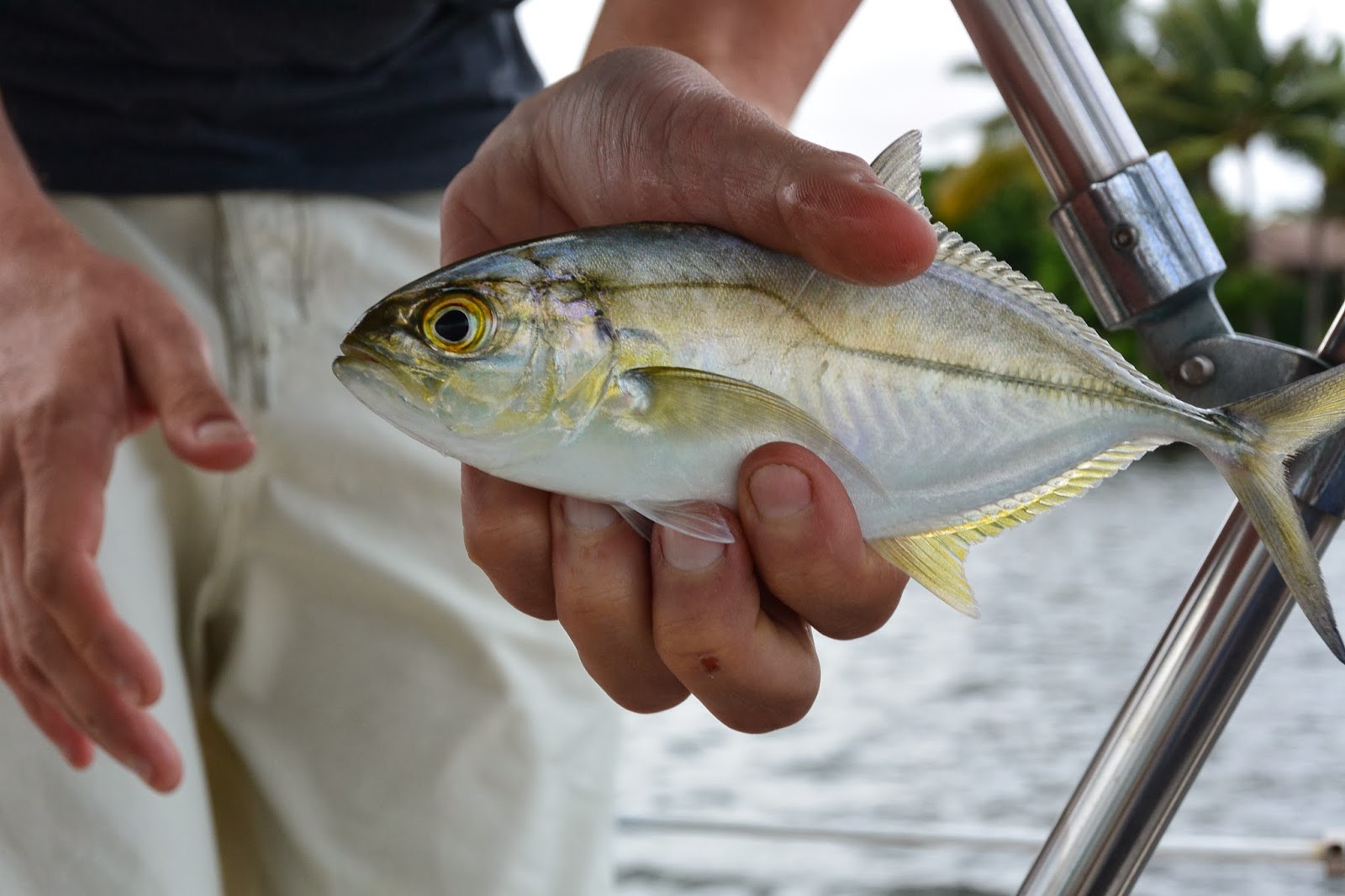 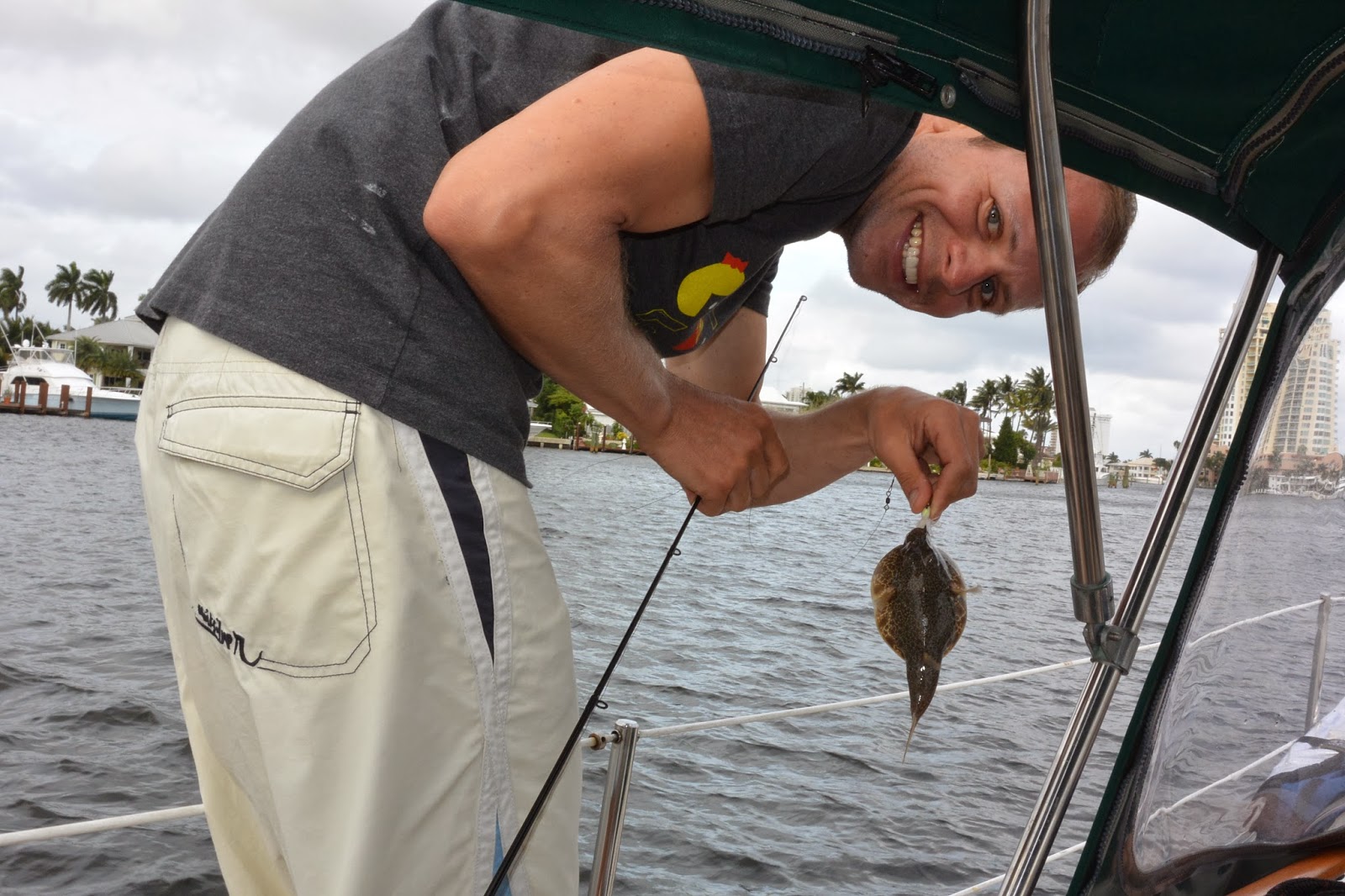 It saves us money to anchor instead of staying at a slip in a marina. The downside is, you have to be pretty self reliant. You're on your own reserves of electricity, water, etc. Also, instead of stepping off your boat onto a dock and walking to land, you must hop into your dingy and motor (or row) to the nearest place where you're allowed to dock said dinghy. Usually, zipping around on the dinghy is fun, but recently, it's been a bit of a headache.

Our 4 stroke, 6 horsepower outboard engine on the dinghy started acting up a couple weeks ago. It tended not to start right away and occasionally died, usually right in fun spots like crossing a busy channel full of boats. A few days ago we finished some chores in town and had a drink at the restaurant that allows you to tie up your dinghy. The weather forecast was not good, dark clouds were building and the wind was starting to kick up. I suggested to Dana that we get moseying, and she concurred.

We stepped into the dinghy with all our crap (two folded bicycles, grocery bags, backpacks, extra gas I got at a gas station) and I started yanking on the starting rope. Nothing. Eventually it started for a second and died. Meanwhile, the whole restaurant was watching us struggle, clearly entertained, wanting to see how this escapade would unfold. A friendly older gentlemen who came to the restaurant on a power boat and docked next to our dinghy (as this is a dock and dine restaurant) came out and started offering advice. After taking out and inspecting the spark plug, adding extra fuel to the tank and various other tweaks, he suggested "just let it sit for a while." And we did.

After a few minutes, it started to rain. Not just rain, but a Florida deluge. I waited patiently and then pulled at the starter again like mad to no avail. The kindly advice-offering gentleman came running back out and suggested that we tie up to his boat and he tow us back to Lake Sylvia. Like I've said before, boating folk are incredibly selfless. His girlfriend rushed out of dinner early and they ferried us as far as they could before we had to cross under a low bridge into Lake Sylvia.

At this point it was pitch black, the winds were howling, and it was raining like a monsoon. I started rowing directly into the wind and rain toward Eventyr as if my life depended on it. After about ten minutes, I noticed that we had made it a couple hundred feet and had about a half mile to go ... sigh. As we rounded a bend, we could see that Eventyr was right where we left her, which was good. I was mildly worried that with the near gale-force winds she might have dragged on her anchor, but she had not. After what felt like another decade, we were slightly closer to our floating home, but I was losing steam.

Out of dark, I heard the high whine of a small outboard, and someone yelled "you guys need some help?" I looked over my shoulder and saw someone approaching on an even smaller dinghy than ours, with an even smaller outboard than ours. He was wearing foul weather gear and said as he got close, "This totally sucks, man, it's happened to me, and I can't leave you our here like this. I'll tow you back to your boat." He towed us back to Eventyr, tucked down in his small dinghy to lower his wind profile and dropped us at our swim ladder. We thanked him profusely, and he replied, "No worries man, we're boaters, we have to look out for each other," and then he motored back to his boat.

The next day we went to visit our dinghy savior and learned that his name is Jarred. He and his friend Alex sailed their relatively small but seaworthy Ka' Imi down from the Thimble Islands in CT and eventually plan to head down to the keys. We spent the next several days hanging out with Jarred and Alex. Turns out Jarred makes his living doing fiberglass work on boats, in addition to delivering peoples boats from one place to another, and various other boat-related activities. He even did some amazing fiberglass work on Eventyr, replacing a faulty depth sounder that was built into the fiberglass in our cockpit. 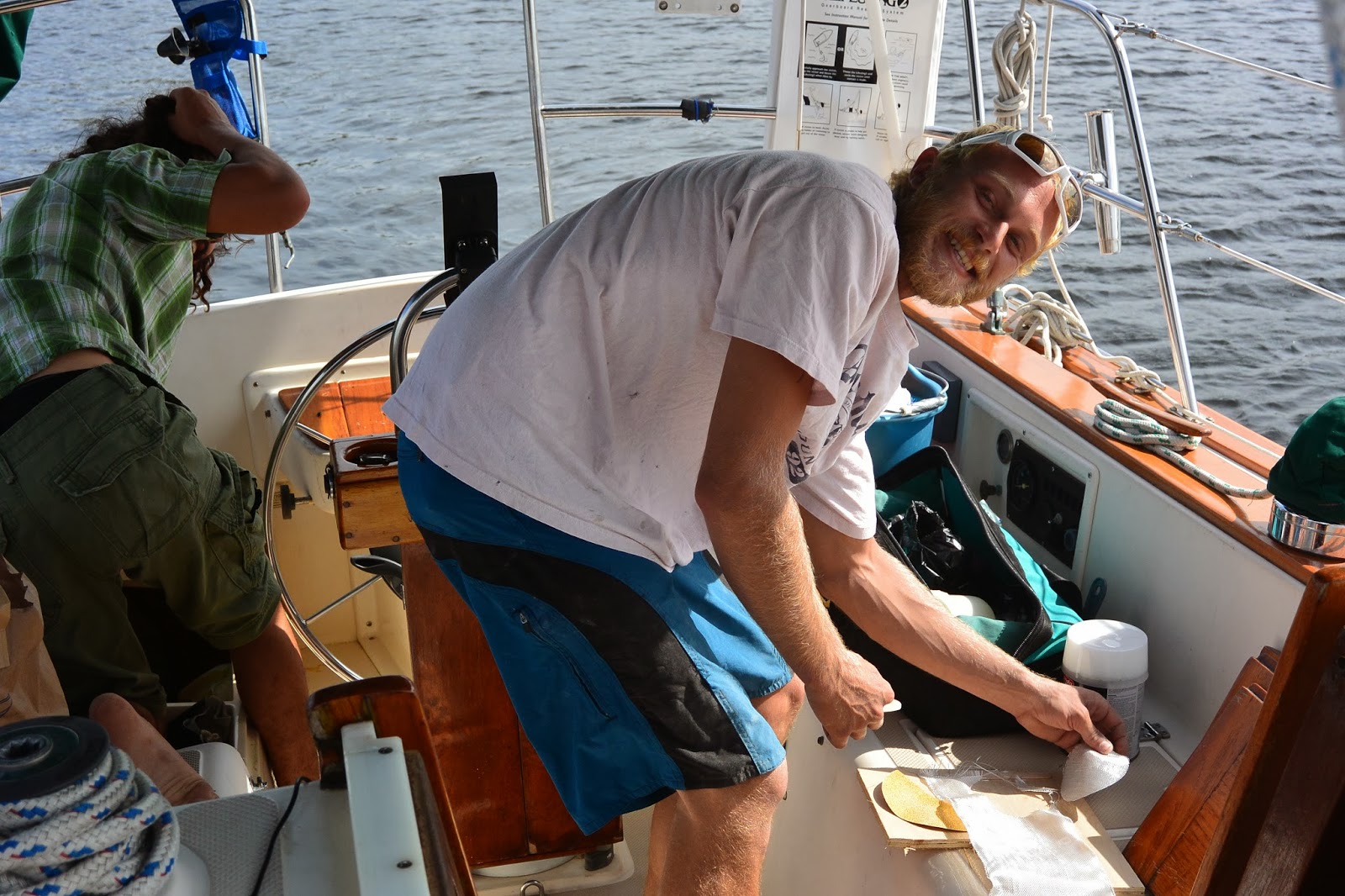 The four of us went out for a sunset sail on Ka' Imi the other day, and Dana and I got our first taste of the open Atlantic. We were heeled over quite a bit in moderate winds, but it was exhilarating. 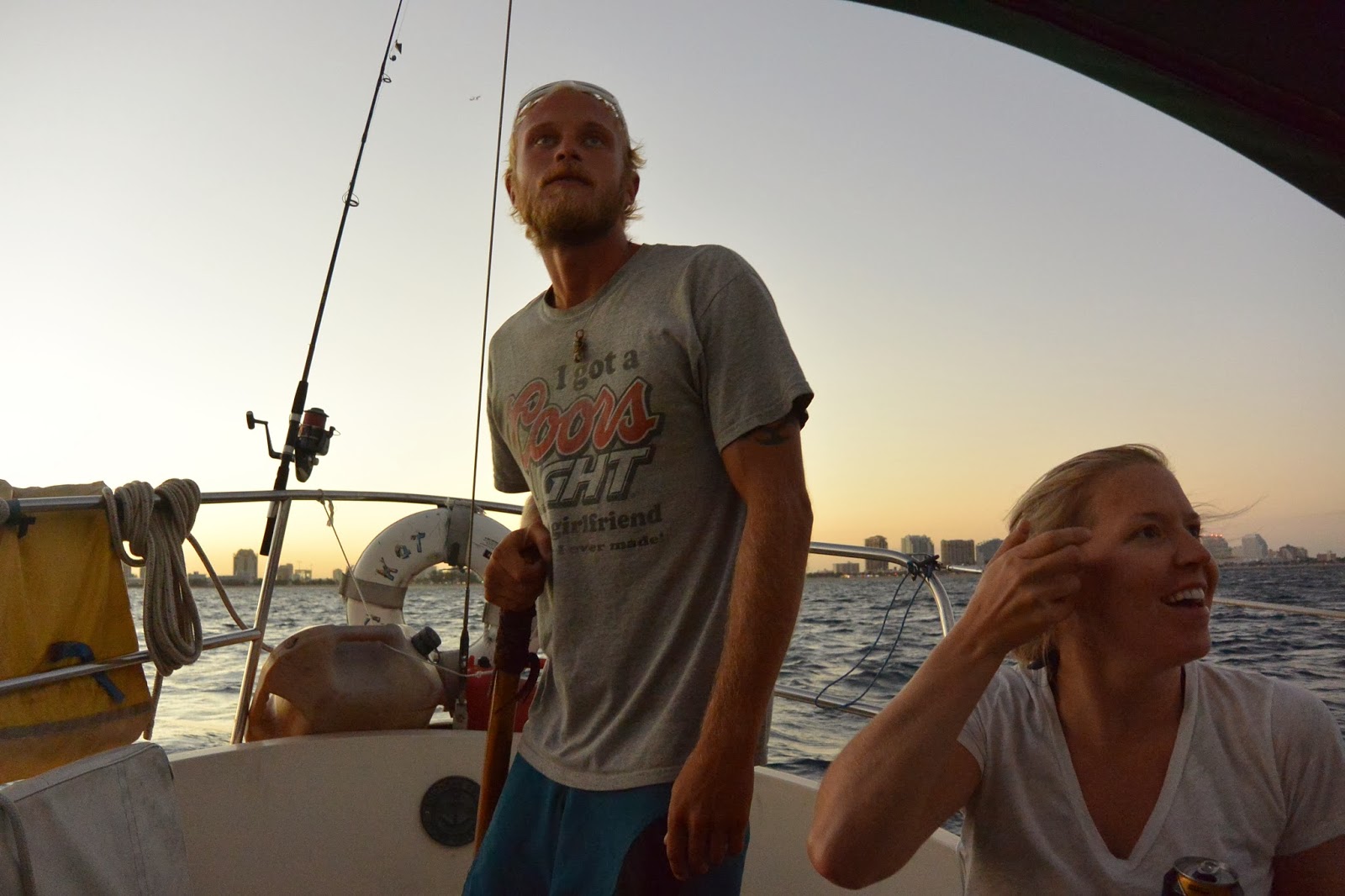 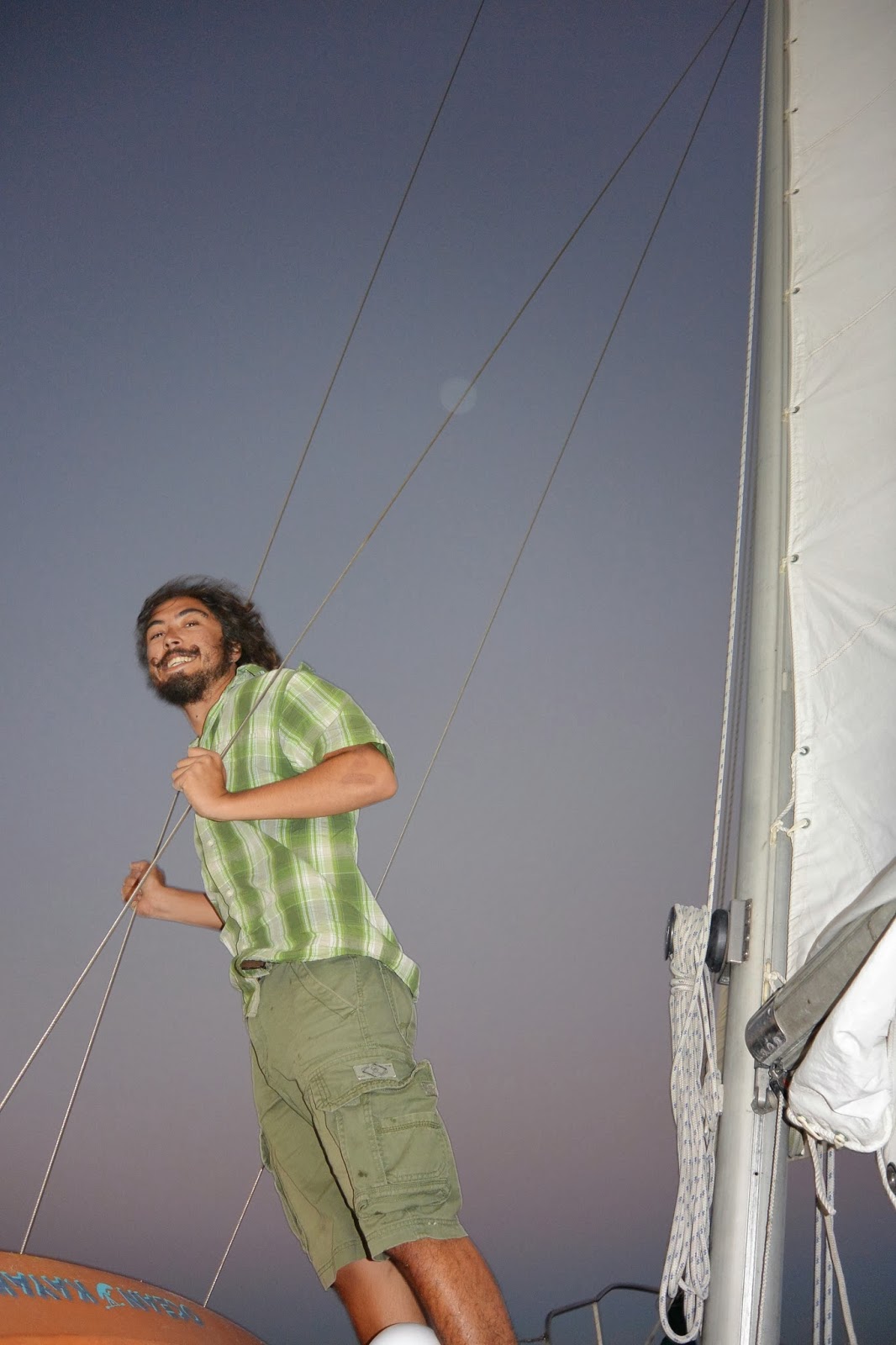 We plan to head back out for another run into the open ocean for a practice run on Eventyr tomorrow, just the two of us.

We had Alex and Jarred over for Thanksgiving dinner on Eventyr and Dana made a seitan faux turkey with all the trimmings followed by pumpkin pie. Our guests humored our vegetarian meal, and Jarred even asked for seconds! 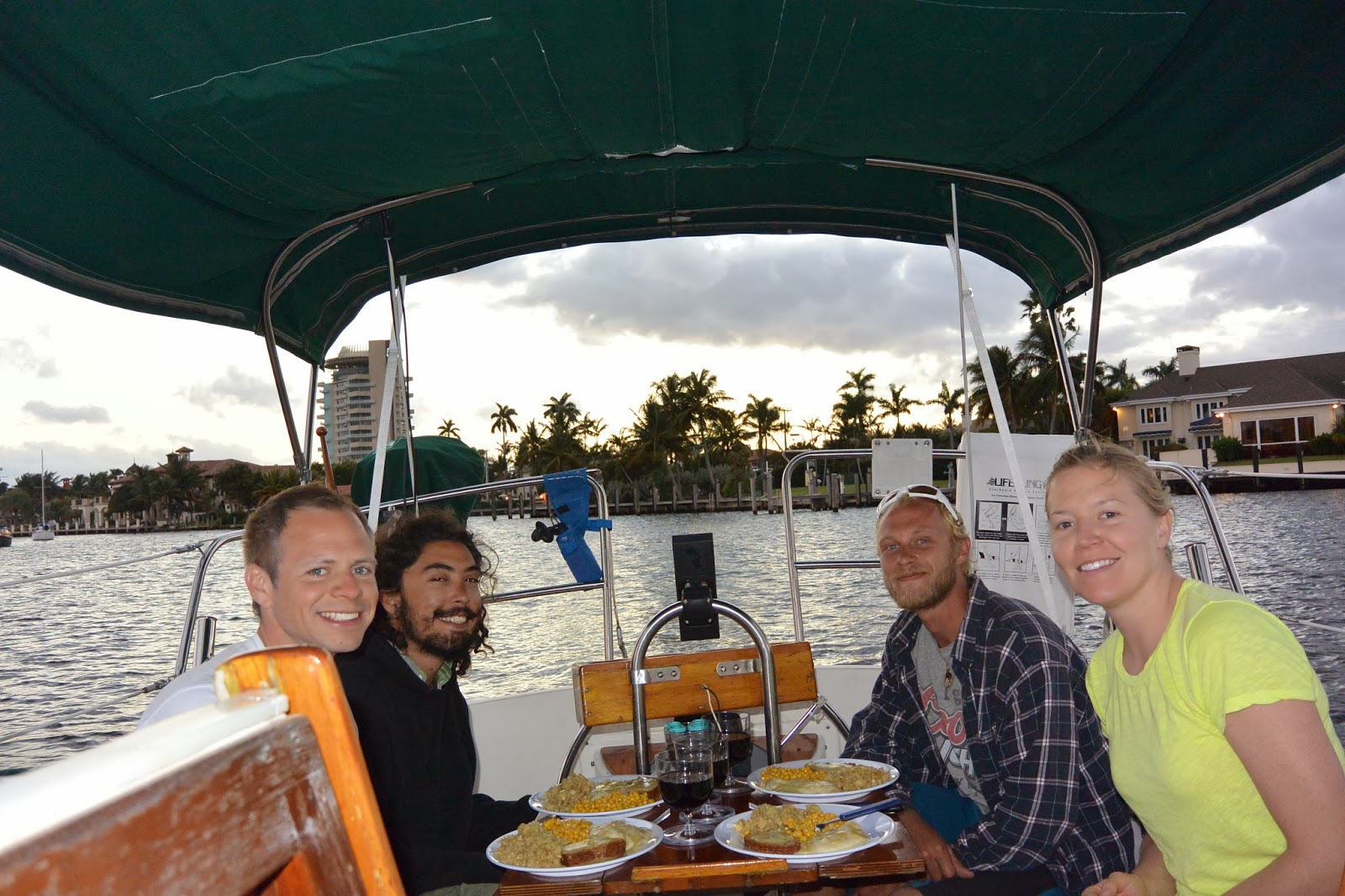 Now, we're back at a marina in Ft. Lauderdale enjoying wifi, hot showers and walkable access to things we need. The weather forecast is looking good for us to leave for the West End on Grand Bahama on Monday. We'll have to leave about 3 am to make it there while it's still light. We finally have our weather window (I hope!). Now is last minute provisioning, fixes, etc., to get ready to leave the country for almost a year. Jarred plans to join us on the crossing before ferrying back to Ft. Lauderdale, which will be some much needed help! 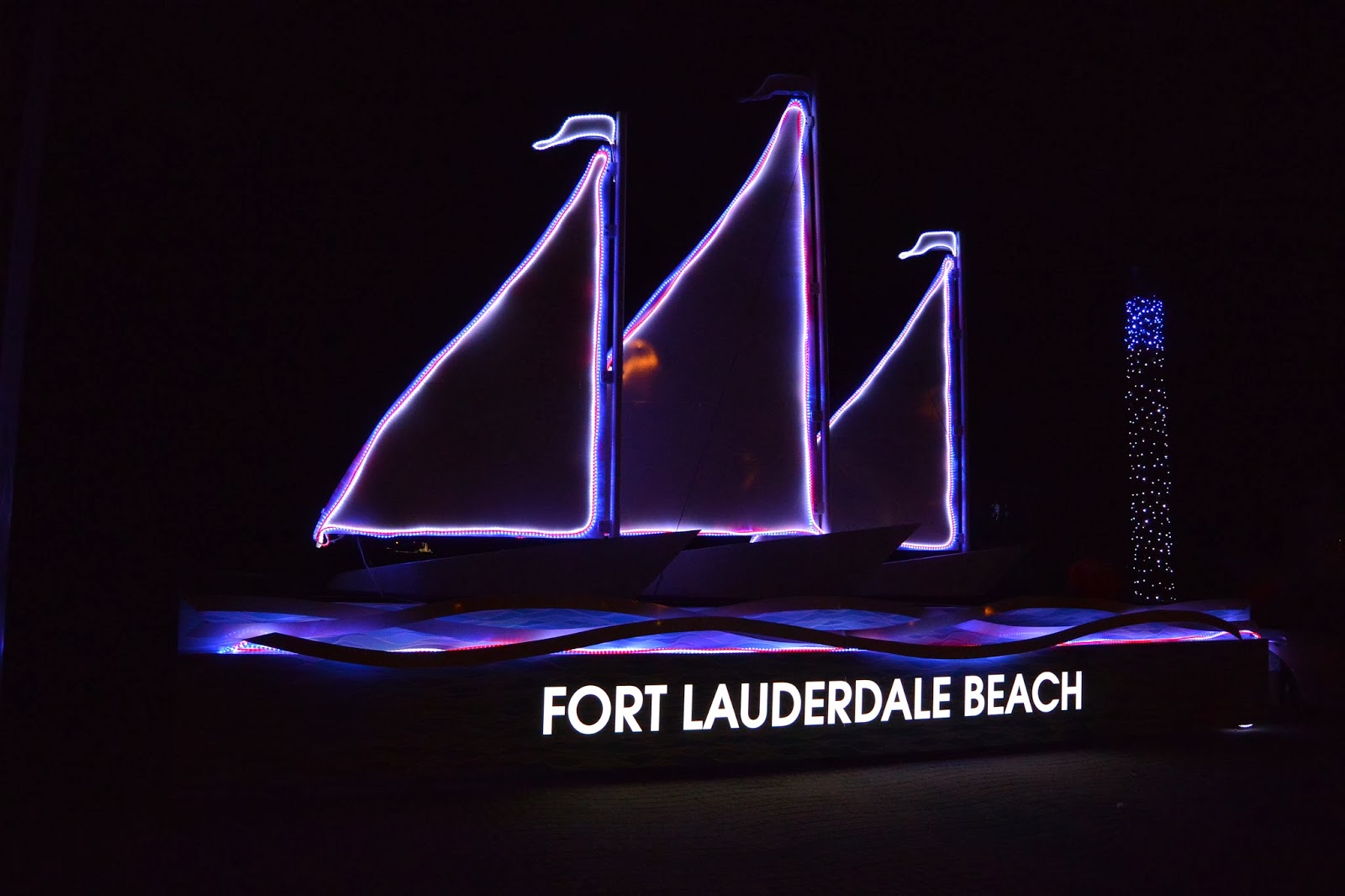